Accessibility links
Creepy Critters In Sensitive Places: How Science Reporters Get Your Attention : Krulwich Wonders... Some of the best science reporters, like the best Vaudevillians, the best circus performers, the best teachers, are hungry for attention — not for themselves, but for a way to seize your mind, to bring you to an idea, a puzzle, or a creature.

Creepy Critters In Sensitive Places: How Science Reporters Get Your Attention

Creepy Critters In Sensitive Places: How Science Reporters Get Your Attention

We're not as daring as Magellan (who died) or Columbus (who went crazy) or Henry Hudson (who froze), but in our dainty little way, we take astonishing risks. Well, maybe not astonishing. Maybe just embarrassing. 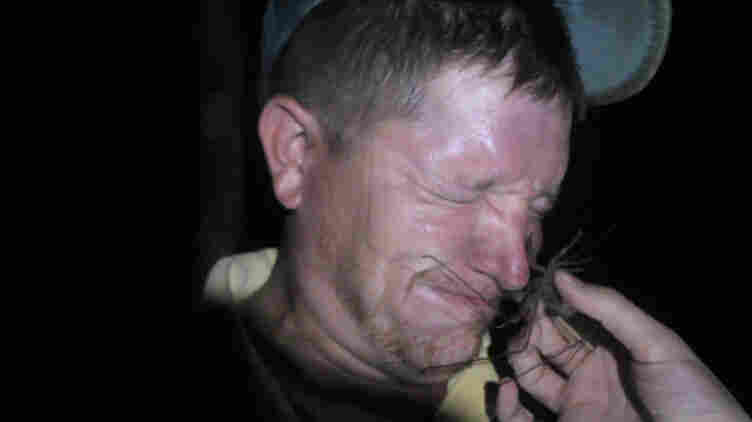 Some of the best science reporters, like the best Vaudevillians, the best circus performers, the best teachers, are hungry for attention — not for themselves (well, maybe a little), but for a way to seize your mind, to bring you to an idea, a creature, a puzzle. We are a strange bunch, shy, desperate, ferocious — we want you to know what we know, meet who we've met.

Here's a perfect example. I've got this friend, Destin, who is not even a fully-employed science reporter (though he's about to be). By day, he tests rockets for the U.S. Defense Department in Huntsville, Ala., but the rest of the time he explores physics, biology and explodes things, blowing up anything and everything (while, of course, wearing safety glasses — because, as I said, we may look crazy, but we're dainty on the inside). He does his reporting on his own YouTube channel, called Smarter Every Day. He's his own cameraman, reporter, narrator, money-raiser and nuisance to his long-suffering wife.

Doing What Must Be Done

Recently, he took himself on a trip to the Amazon rainforest, accompanied by a gang of, you should excuse the expression, "frat boy" types (scientists, I suppose), who took him to a hole, literally a hole in a mound of mud or dirt deep in the forest. In that hole, they knew, was a tailless whip scorpion, a big, scary, frightening-looking multi-legged beast who is clearly, VERY CLEARLY, making Destin extremely uncomfortable. Lots of people get the creeps near spiders, which is what these are (though six-legged, they've got two more limbs up front, making them "amblypygids," part of the spider family). But true to our code (Explore, Describe, Pee in Your Pants) Destin has his Encounter. Yes, his eyes are squinched shut, and he's barely breathing, but he's a Science Reporter, Doing What Must Be Done ... as you will see ... right here ...

By the way, (and this is why we don't belong with Columbus, Magellan or Henry Hudson), according to the scientists at The Wild Classroom, tailless whip scorpions "are completely harmless. They have no way of inflicting stings, or in any way hurting a human being. [They] do not have venom, and their formidable pedipalps [those claw-like limbs] are used solely for capturing small prey like tiny crickets crawling on tree trunks."

They don't even have tails. Tailless scorpions are like mouthless dragons. Very un-dangerous. Their Latin name, "amblypigid," means "blunt rump." So Destin was never in harm's way, not even slightly.

But this is why we are different from those other show folks who make fiction TV and movies — we show you the truth. Destin may be a coward, but he knows the animal is not his enemy. Heck, he even takes it home to its hole after their "date."

They didn't do that in the Harry Potter movies. Harry Potter and the Goblet of Fire, features a tailless whip scorpion. Professor Mad-Eye Moody (the one with the magical eye) calls it "lethal" (hah!) and proceeds to torture the little guy until Hermione begs him to stop.

Dr. Moody may be a full professor at Hogwarts — but he's no science reporter. We may not be pure-bred wizards, but we're made of truer stuff.