Accessibility links
The Big Squeeze: Can Cities Save The Earth? : Krulwich Wonders... What if you put all 7 billion humans into one city, a city as dense as New York, with its towers and skyscrapers? How big would that 7 billion-sized city be? As big as New Jersey? Texas? Bigger? Are cities protecting wild spaces on the planet? We try a little experiment to find out.

The Big Squeeze: Can Cities Save The Earth?

The Big Squeeze: Can Cities Save The Earth?

Remove all the space within the atoms making up the human body, and every person that’s ever lived would fit inside a baseball. 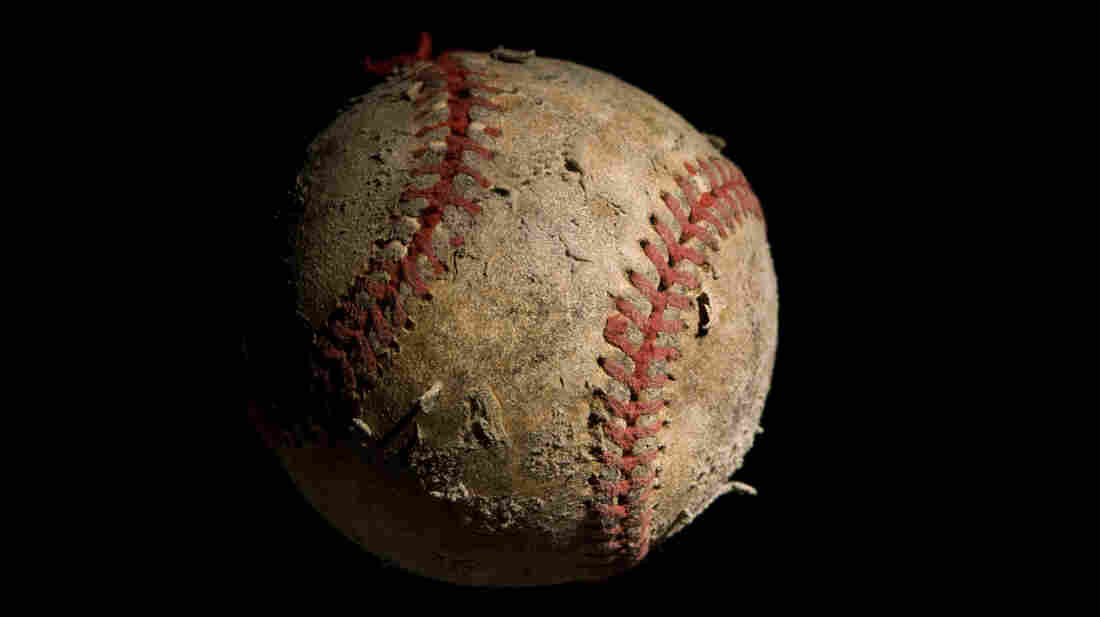 That's a very tight fit. So tight that in real life, it couldn't happen. It's not physically possible. Atoms won't crunch that close. But people, it seems, are willing to try. In the last century, all over the planet, billions of us have moved from villages and farms to squeeze into tighter and tighter, ever denser spaces ... like these ... 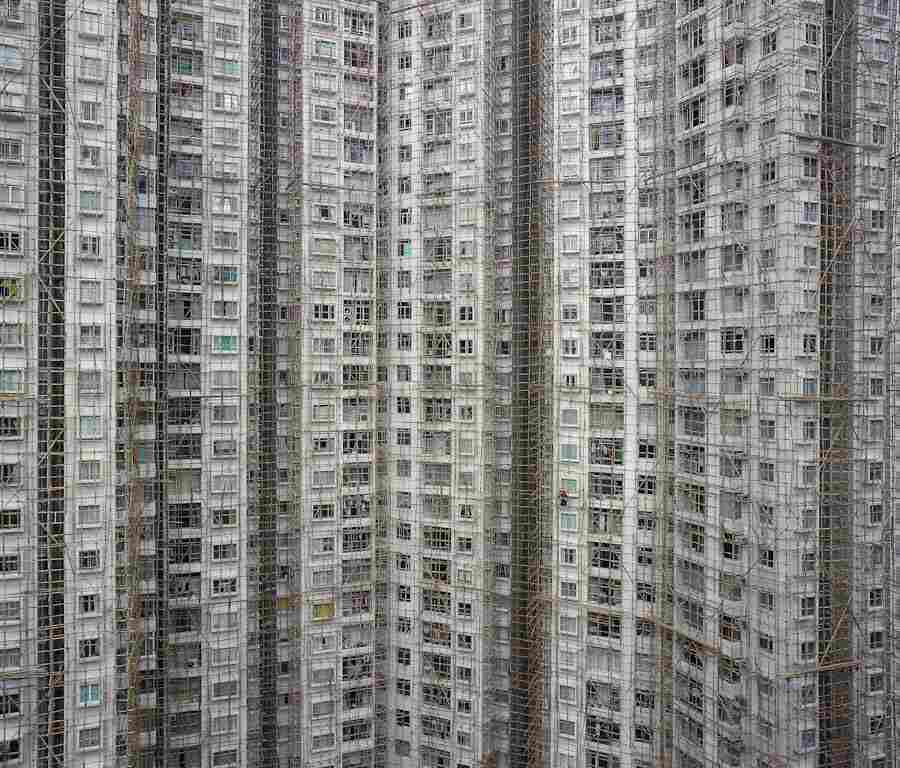 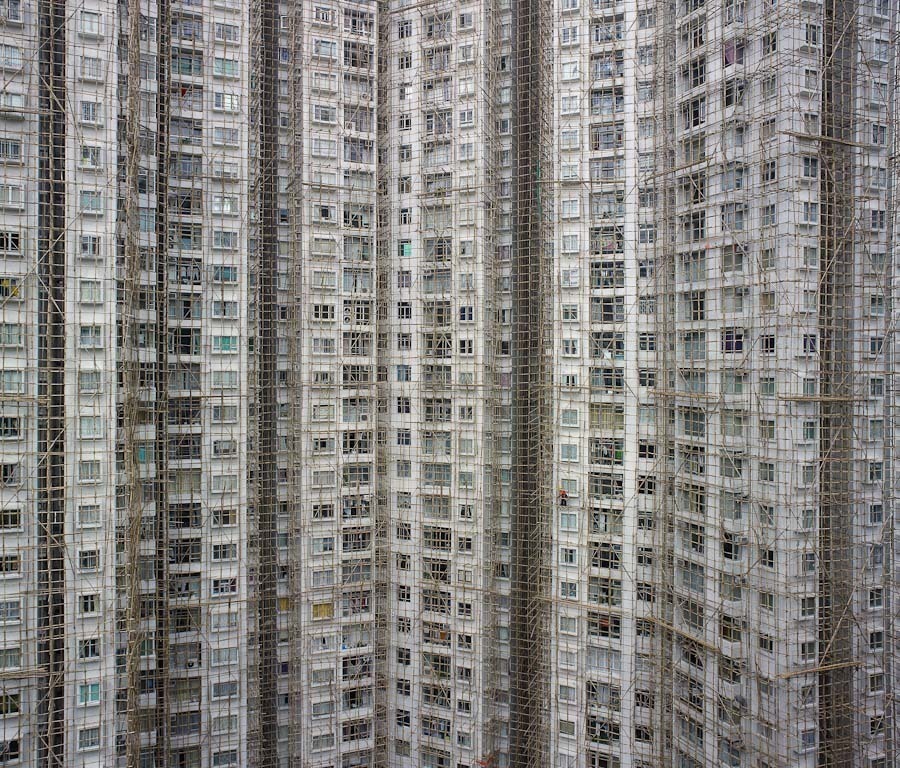 They are apartment towers in Hong Kong. Photographer Michael Wolf, who has lived there for decades, pushed his camera close, so all he shows are windows and walls; there's no street, no sky, no top, no bottom, no end. The overall effect is like staring at a frozen tidal wave of residential construction, overwhelming, yet empty. You know this place is crowded, but you don't see a soul ... 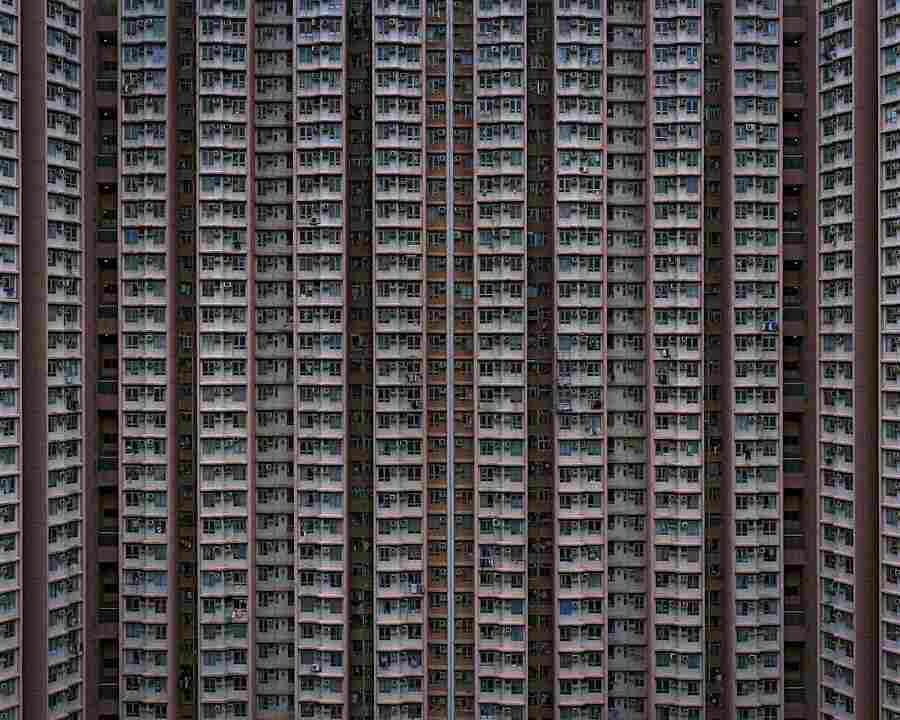 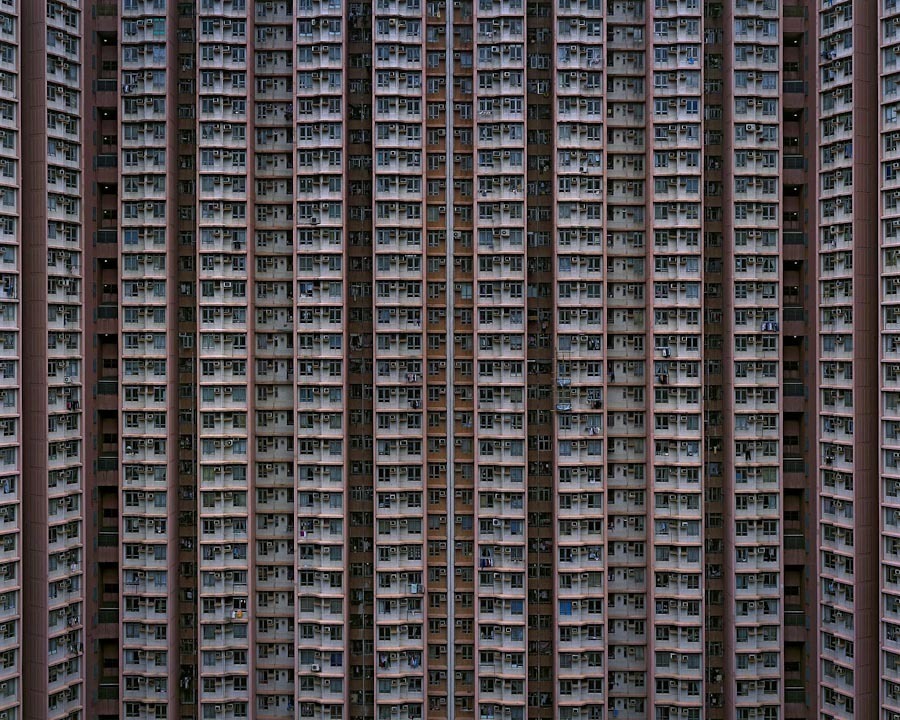 ... well, that's not exactly true. If you look closely, you can see the occasional towel set out to dry, a hint of someone looking out one of a gazillion windows ... but for the most part, what you see is a concentrated living space, thousands and thousands of apartments ... 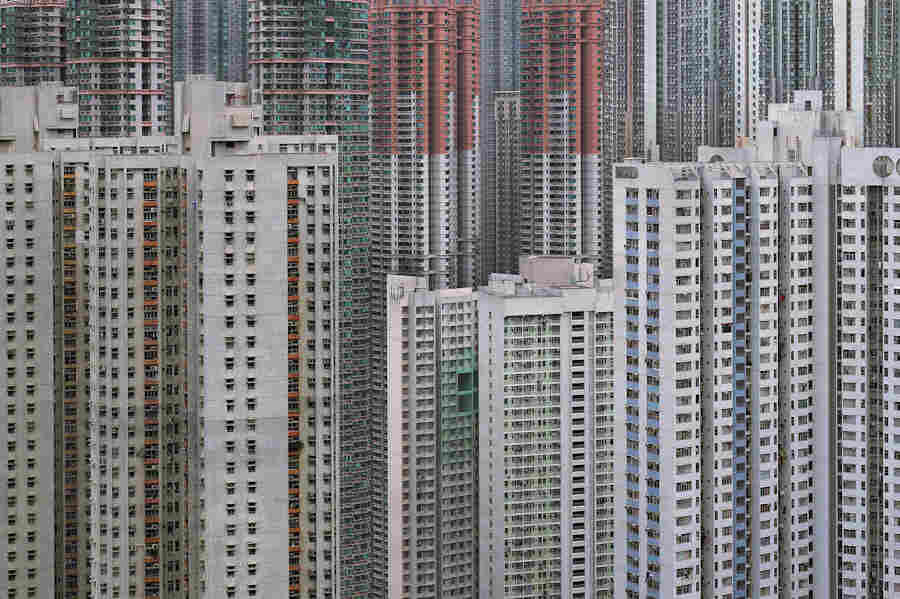 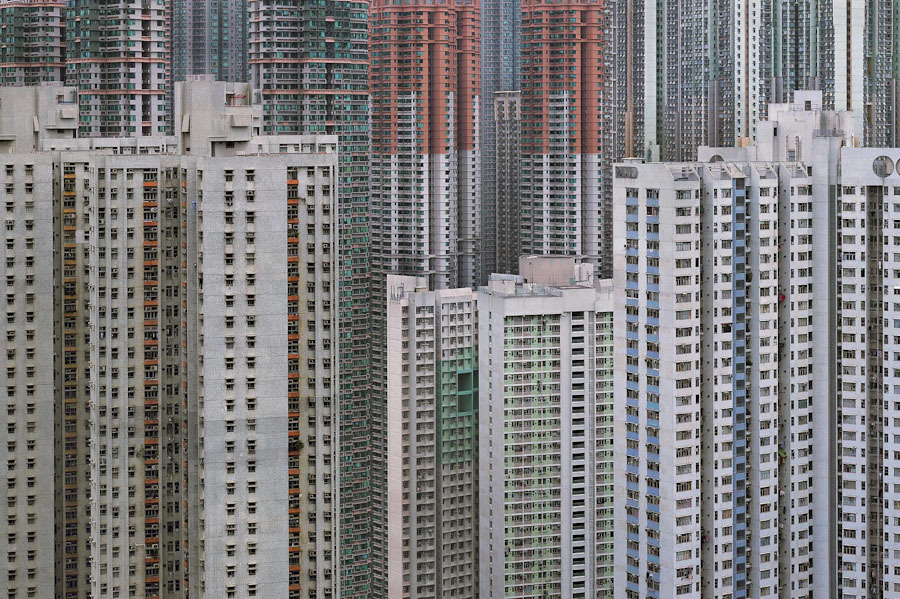 ... towers of them next to towers next to more towers ... 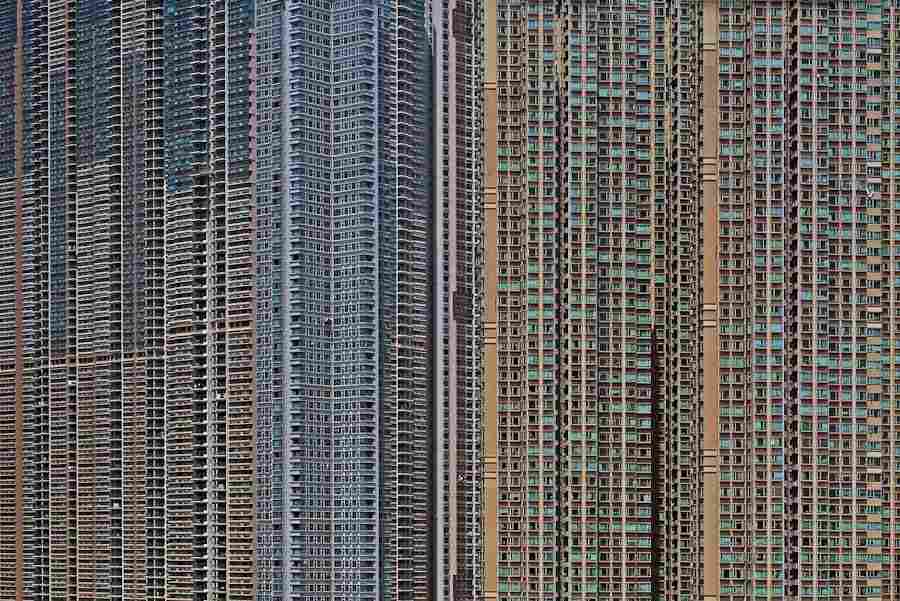 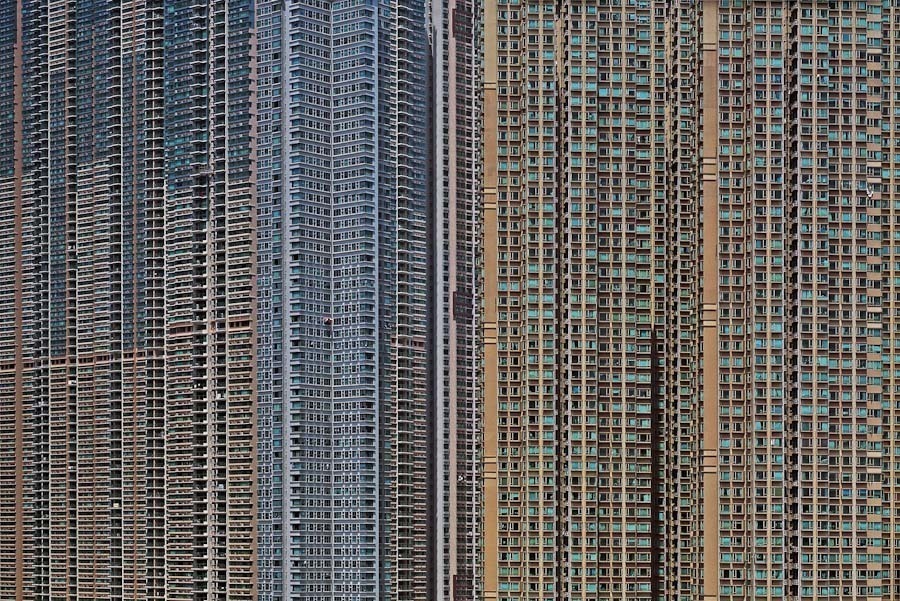 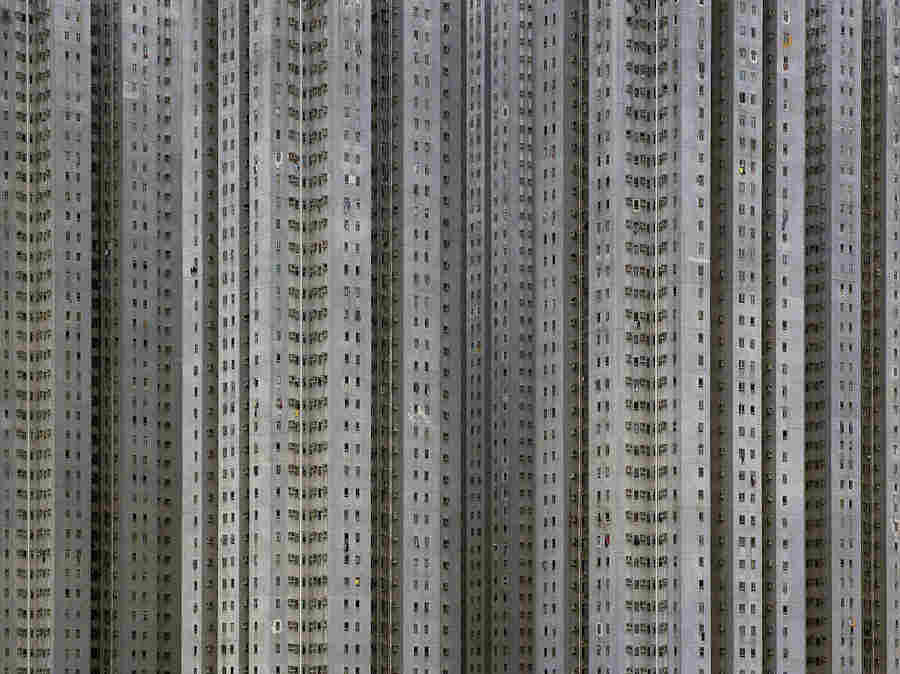 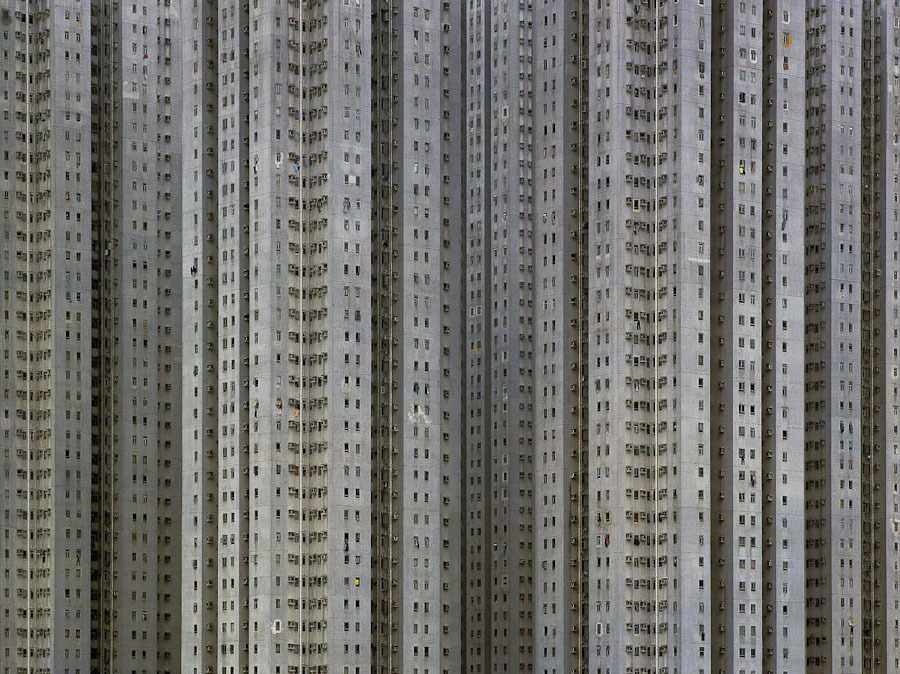 ... and as I look at Michael's pictures (while sitting in my box-like apartment in New York under somebody else's apartment, surrounded by similar apartments, left and right of me, up and down the block), I'm thinking, "OK, this not be the most beautiful, and certainly not the most natural way to live, but modern cities allow enormous numbers of people to spend their lives in extraordinary close proximity, piling them, literally, on top of each other, and somehow, it works! 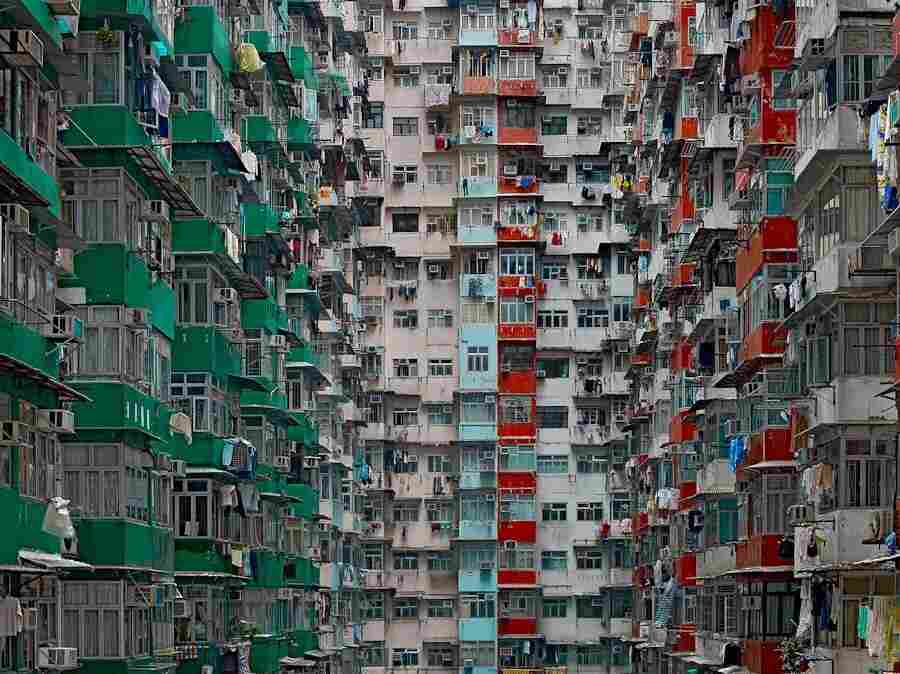 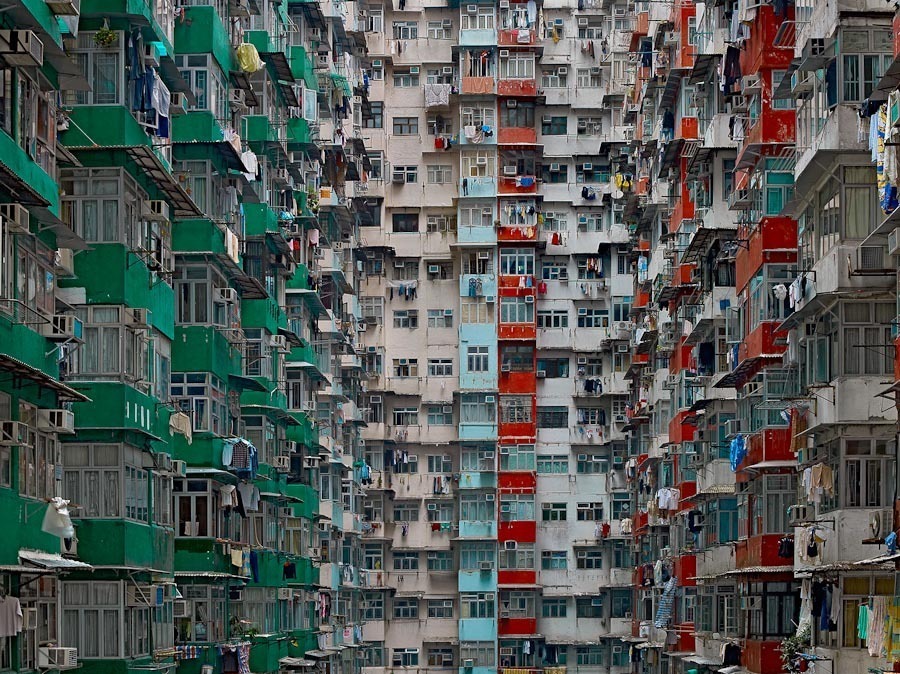 Because cities, even the ugliest ones, have an obvious efficiency. After all, if all 7 billion of us had to live side-by-side in two story ranch houses, or yurts — no towers allowed — we'd overrun the planet; we'd strangle the forests, the meadows, the plains. So until we learn to have fewer babies, cities may be our salvation, no?

Tim de Chant has a wonderfully creative blog called Per Square Mile, where he thinks about population density. Last summer, he decided to try a little experiment. He asked himself: Suppose I could move everybody on Earth into a single city. How much space would that city occupy?

Would it cover half a continent? Or could we fit all humanity into New Jersey? 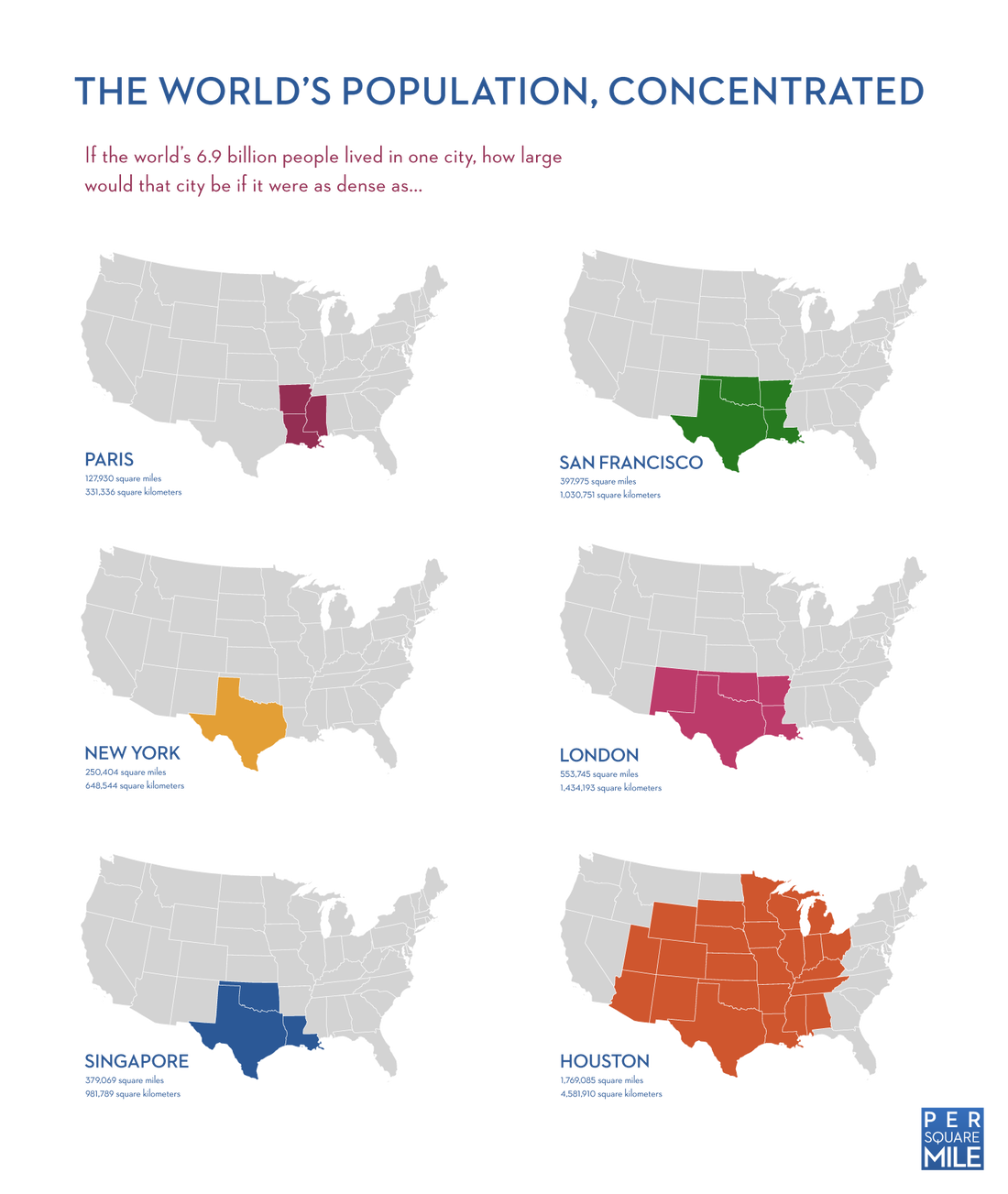 In his six-city sample, New York and Paris did the best. Had Tim used really crowded cities like Hong Kong, Manila or Cairo as his model, could he have clumped the world into even skinnier spaces like Delaware or Rhode Island? I don't know.

But he was quick to remind his readers, that cities are NOT as planet-friendly as the graph suggests. You can't take 7 billion people, dump them into Texas and assume that the rest of the Earth will be left alone. Even if nobody lived in the other 49 states, Mexico, Canada, Asia, Africa, Australia, Europe and South America, we would still need to use some of that space.

How much extra space? Well, again, said Tim, that depends. If you are happy to live with a modest diet, one pair of shoes and a bike, you won't be drawing on as much of Earth as, say an American would. If all 7 billion of us want to live like Americans, with refrigerators and air conditioners and cars and running water and TVs and strawberries in winter — then we will have a space problem.

In a very rough way, he calculated that if everybody agreed to live like the average Bangladeshi, the world could exist largely people-free.

But as soon as we get richer — even as rich as the average Chinese — the world can't carry all 7 billion of us. We need more planet. If we all want to live American-style, we'd need four more planets ...)

Or ... let's not get all doomsday about this. We could solve this problem by making fewer babies, building more efficient buildings, machines, using new, lighter materials, creating technologies that make everything less costly or wasteful, learn to live on Mars, or, in a pinch, we can be saved by a Miracle.

But the bottom line is, we have become very numerous. The other day, The New Yorker magazine ran a cartoon that shows the Earth going to the doctor. The doctor finishes the examination, sighs, and says sadly, "I'm afraid you have humans." The Earth doesn't look too pleased.

Michael Wolf's remarkable Hong Kong photographs can be found in his book Hong Kong: Front Door/Back Door, published in 2005. As for the Martian option, well, after looking at Michael's photos of Hong Kong, you can go from the most crowded of places to the most desolate and emptiest. It's a do-it-yourself panorama from the Martian surface, just in, courtesy of NASA's Rover, Curiosity. You can swing the image skyward, ground-ward, but wherever you look (you can zoom or pull), there is nothing but rock. Endless rock. Not a plant. Not a stirring, living, anything. If Hong Kong seems oppressively overbuilt, this is its achingly-empty opposite. I don't know if one image talks to the other, but there might be an invitation in there, somewhere.