Accessibility links
Our Very Normal Solar System Isn't Normal Anymore : Krulwich Wonders... Turns out our solar system — with its medium sized sun, its four small rocky planets, its four big gassy ones farther out — isn't like the others. We are unusual. Very unusual. Says one prominent astronomer, we are "a bit of a freak."

Some things you just count on. Like if we ever meet a space alien, it should have eyes (and maybe a head). Like somewhere out there, there are planets like ours. Like we have an ordinary solar system — "ordinary" because you know what it looks like ... 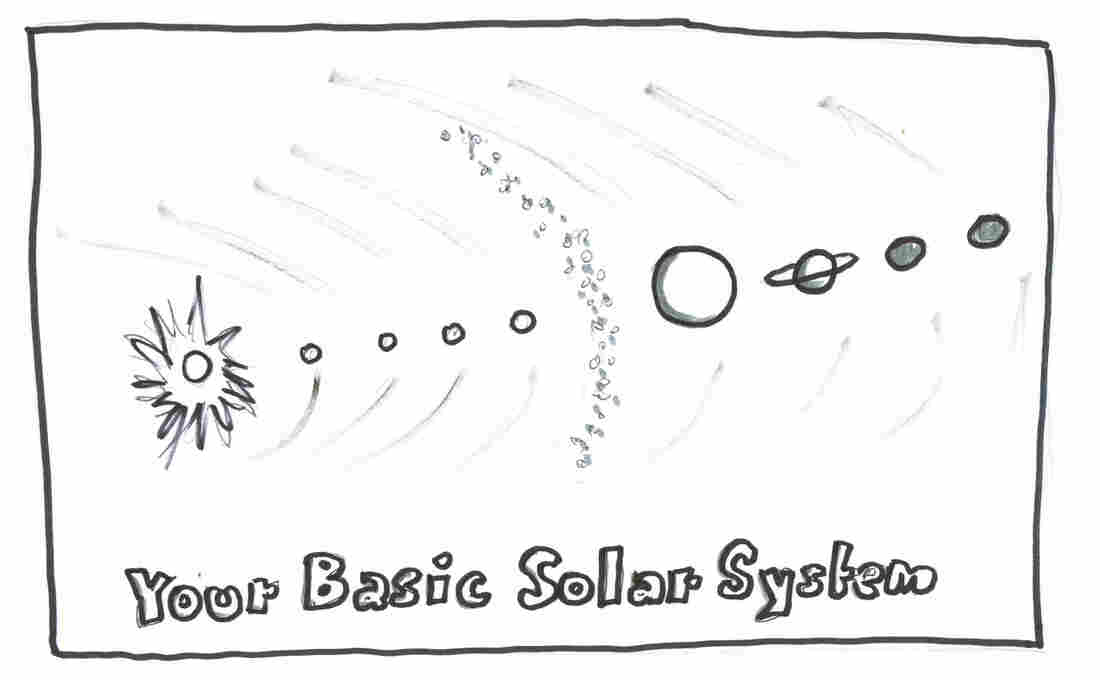 It's got a sun in the middle, little planets on the inside, bigger ones farther out. That's what most of them should look like, no?

We thought they should. In astronomy class (for any of us who took astronomy) they talked about a "frost line." That's a line, some distance from the sun, where it gets too cold to make rocky planets. 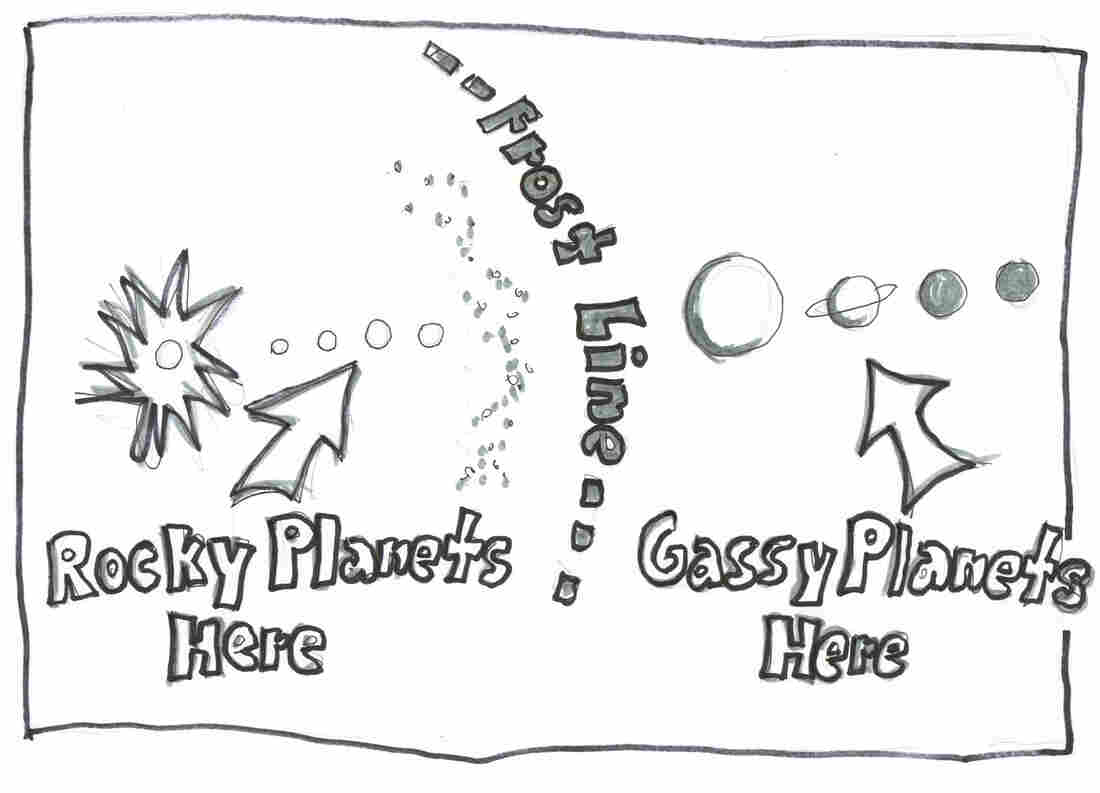 They said when a planetary system forms, the dust that's closer in, on the hot side of that line, melts into rocky minerals, forming solid balls, like Earth and Mars.

But farther out, on the frosty side, the dust stays gassy, mostly hydrogen compounds, swelling to gigantic size, like Jupiter, Saturn and Neptune.

Distance from the sun sculpts the neighborhood. That's why most planetary systems in the universe were supposed to look like us. Rocky planets in, gassy planets farther out.

Then we looked. And what did we discover? 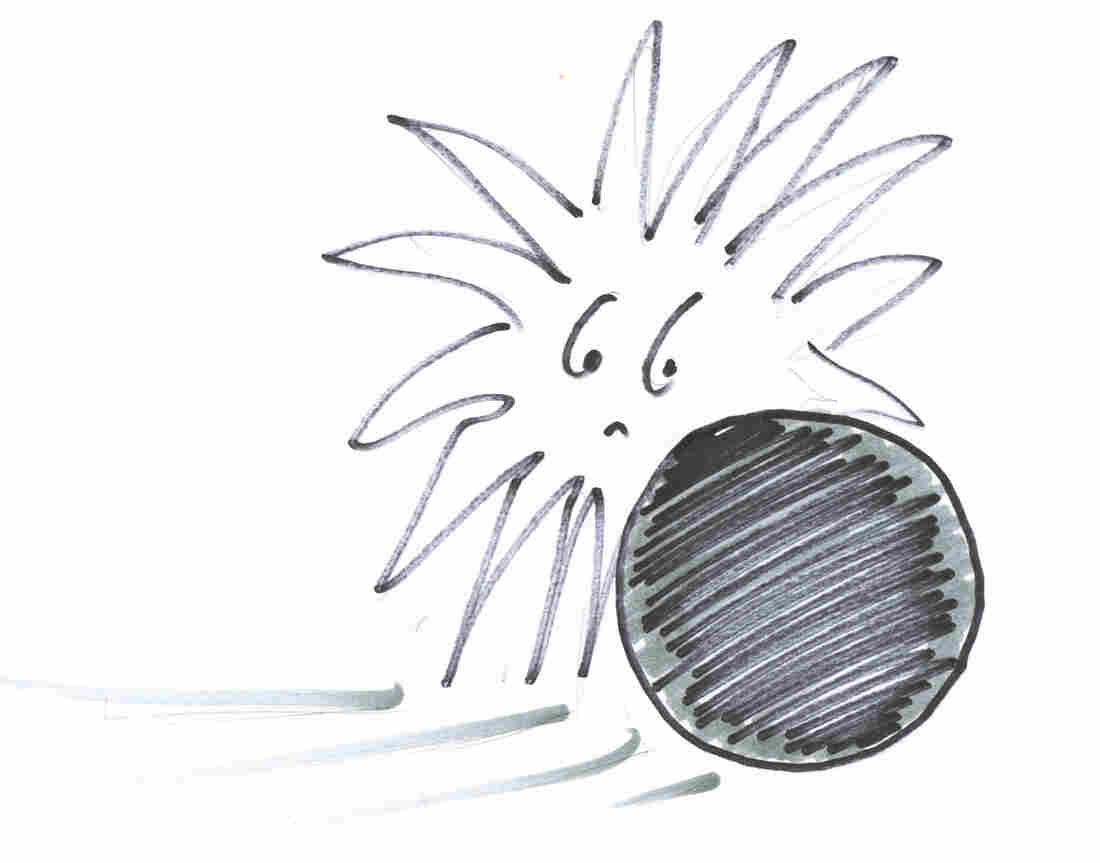 Big gassy planets not where they should be. Instead of keeping their distance, and staying past the frost line, there are dozens and dozens of Jupiter-sized balls (big! really big!) tucked incredibly close to their star, squeezing so close, their "year," their orbit, lasts only a few Earth days. They are in tighter than Mercury.

Which means these once-cold planets are now, puzzlingly, hot. Astronomers call them "hot Jupiters," because temperatures at their cloud tops can sizzle at 1,000 degrees Celsius. 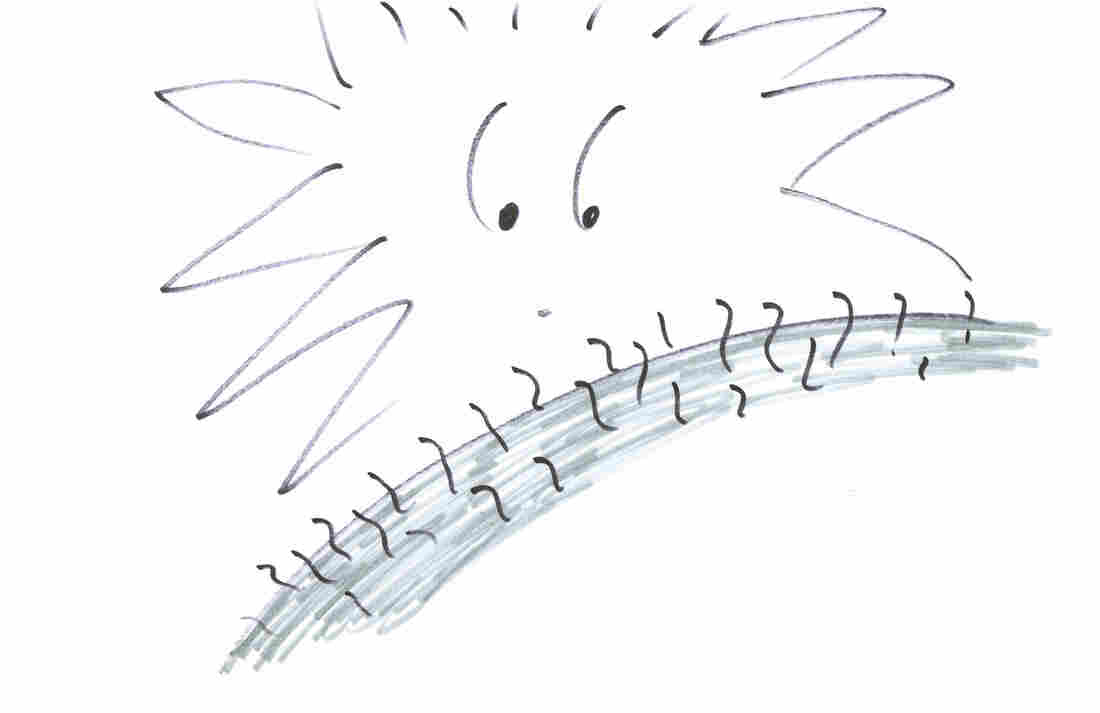 Or — and here's a pattern that shows up very often — you'll get not one, but two biggish Neptune-sized planets, like hungry twins, nuzzling together near their star. Very near. 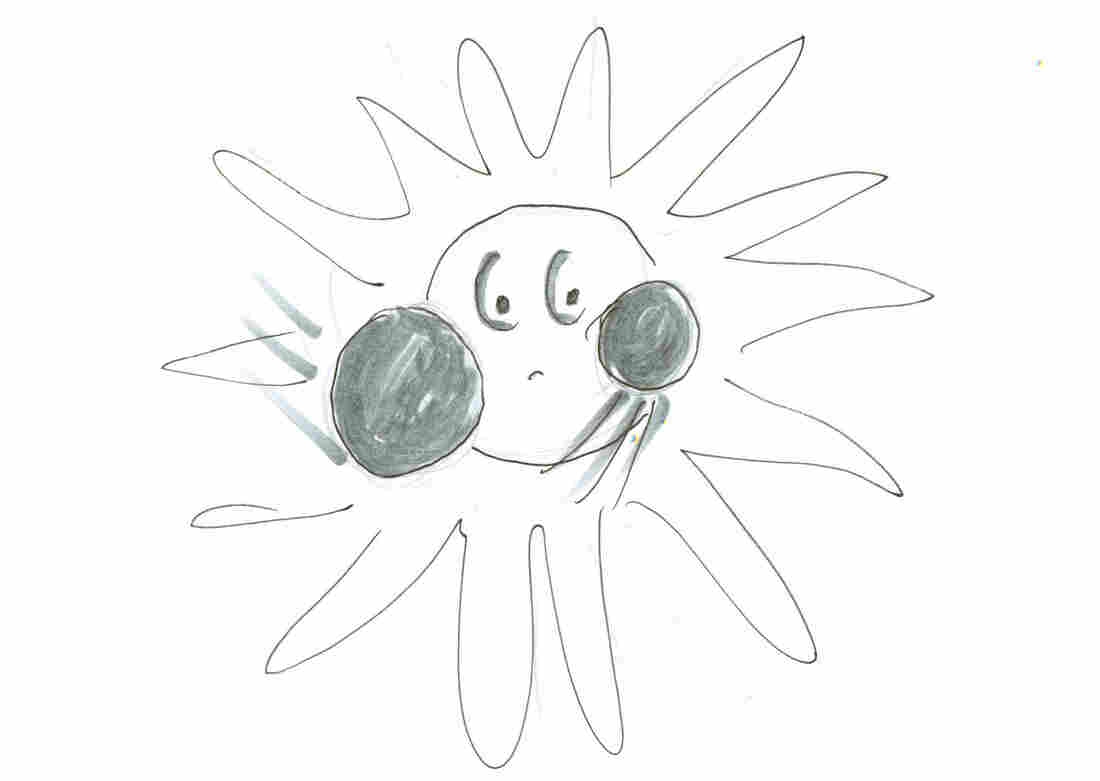 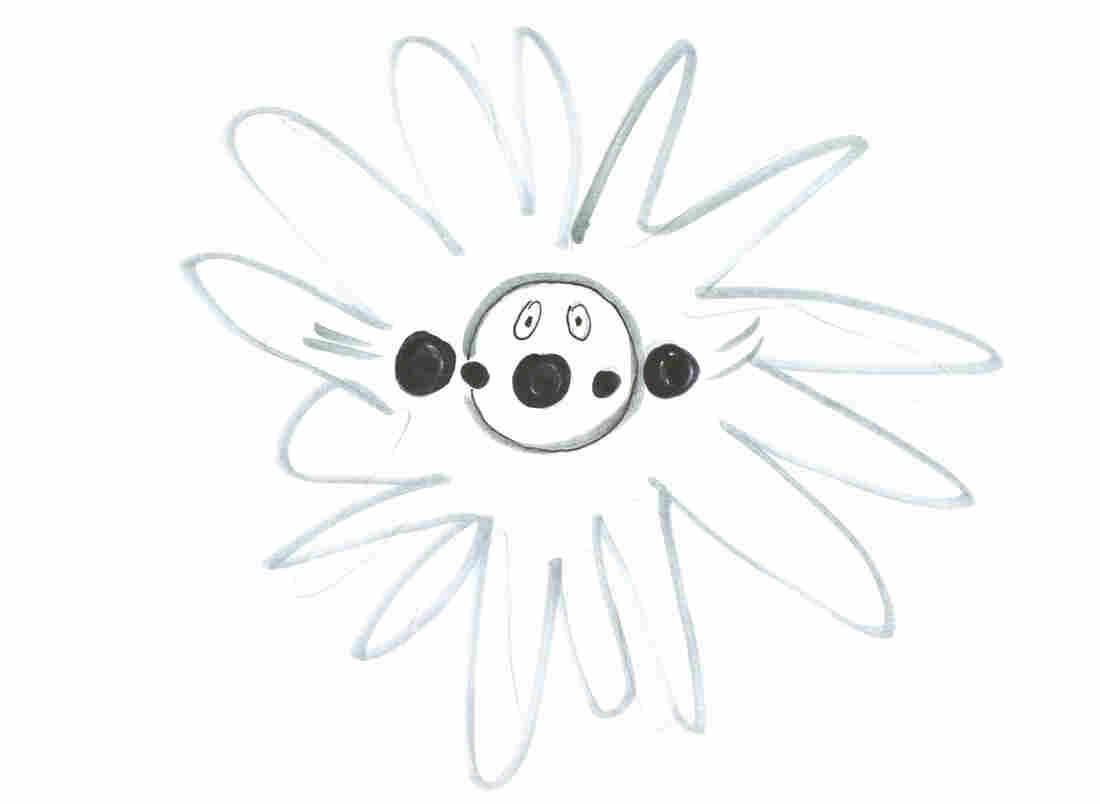 As of this month, we've discovered 884 planets, 692 planetary systems, 132 of them with more than one planet and, strange to tell, almost none of them look like us.

"We are now beginning to understand that nature seems to overwhelmingly prefer [planetary] systems that have multiple planets with orbits of less than 100 days," says Steve Vogt, astronomer at the University of California, Santa Cruz. "This is quite unlike our own solar system, where there is nothing with an orbit inside that of Mercury. So our solar system is, in some sense, a bit of a freak and not the most typical kind of system that Nature cooks up."

All of sudden, we're the abnormal ones. We have to figure out why our solar system turned out different from all the others.

The newest explanation is that new planets don't stay put. They move. A gassy planet will form on the far side of the frost line, orbit for a while, and then gradually move inward, pulled in closer by the star. It stops only when the sun pushes back (via strong T Tauri winds that come with the start of nuclear fusion).

Did We Once Have A Big Sun-Snuggling Planet?

Maybe we once had a big gassy planet close to our sun, but it didn't survive. It became part of the Sun. Or maybe it got ejected — astronomers are finding emigrant planets, lonely orbs that wander the universe with no star, just drifting. Maybe one of those used to live here.

Or — maybe Saturn and the Sun played a gentle tug-of-war. There are computer simulations that suggest Saturn's gravitational tug kept Jupiter from sailing inwards, so the giants drifted a little closer — then stopped. The truth is, we don't know.

Mike Brown, an astronomer at Caltech, wrote me that while everybody is busy hunting for an Earth-like planet, they missed this story. "Before we ever discovered any [planets outside the solar system] we thought we understood the formation of planetary systems pretty deeply." We had our frost line. We knew how solar systems formed. "It was a really beautiful theory," he says. "And, clearly, thoroughly wrong."

It is something I find deeply weird.

As the discoveries roll in, Mike is getting more and more uncomfortable. Though it will take a while to discover smaller planets, right now there's only one planetary system that looks a lot like our own, he says. "HD 13931 b is nearly perfect. What I would desperately like to know is whether or not it has the small rocky bodies on the inside too. But it'll be a long time before we can find that."

Meantime, he is trying to get used to the idea that we live on an unusual planet in an unusual solar system. That's two "unusuals." One more than he's used to. To live doubly-unusual, is to be luckier — and perhaps rarer — than we knew.

"It really is something that I find deeply weird," he writes. "What does it all mean? I don't know. I am certain that this single-minded emphasis on planets-in-habitable-zones is making people forget that there is still a lot of weird stuff happening out there and that we still don't even understand the basics of how we ourselves got here."