Accessibility links
Moths That Drive Cars (Really) : Krulwich Wonders... Welcome to the New World in which, no kidding, insects run robots. In this case, 14 moths take 14 drives in a wheeled vehicle and steer right to the target. Seeing is believing.

What you are about to see — and I'm not making this up — is a moth driving a car.

That's right. A silk moth — actually, 14 different male silk moths — each, in turn, hooked up to a robotic vehicle at Dr. Noriyasu Ando's lab at the University of Tokyo. Every one drove the vehicle to the intended target. If this were a driving test, all the moths would have passed. 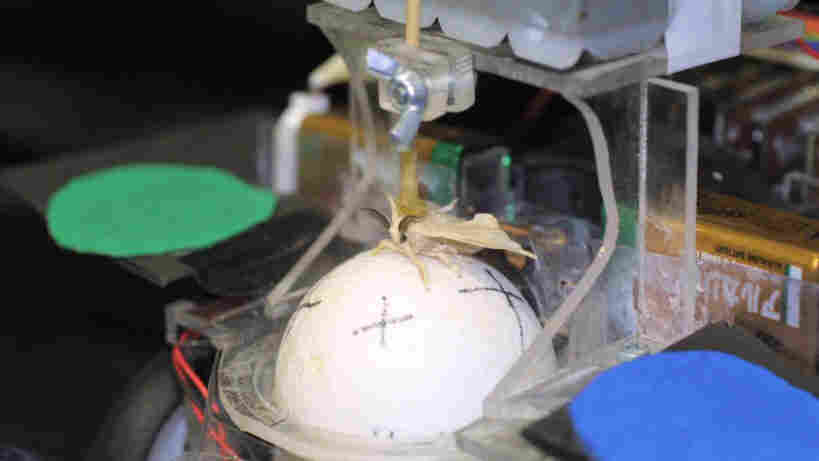 The "engine," as you can see from this photo, was a rather large roller ball, looking like a computer mouse. From what I can understand from the science paper, it kind of was a computer mouse, a free-moving polystyrene ball. The moths would scramble, or dance, across the surface, moving the ball, which moved the vehicle. This is the first time I've heard of an insect running (or driving) a robot. 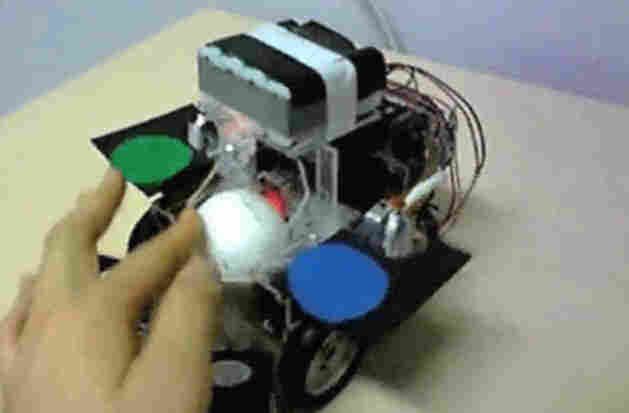 The problem is, they didn't know they were driving. They are moths, after all. What they thought they were doing was zeroing in on a lady moth. Dr. Ando procured a supply of moth perfume, the pheromone scent of an aroused female, placed it at the end of a tube, turned on a tiny fan and blew the scent at the male.

The male, wildly interested, headed for the source doing a mating dance that goes straight, then zigs, then zags, then makes a few turns then a full loop — all to impress his potential mate. Sensors in the two-wheeled vehicle detected the steps and turned them into electrical signals that steered the drive motors.

In all, fourteen male silk moths were tested, and they all showed a scary aptitude for steering a robot. In the tests, the moths had to guide the robot toward a source of female sex pheromone. The researchers even introduced a turning bias — where one of the robot's motors is stronger than the other, causing it to veer to one side — and yet the moths still reached the target.

In this video, you can see a computer readout of two of the moths driving to the right place.

Thinking about all this from the moth's point of view, Dr. Ando has some explaining to do. Not only did he fill 14 male moths with false hope, but he also fastened them (lightly, perhaps) to a stick that pressed them to the ball.

His defense? He and his team want to better understand the moth's antennae and sensory motor system. These critters jump into action when they want sex; they do it extremely fast, faster than any machine, and they do it unerringly. If Dr. Ando can figure out how, he could make robots do it too, which might help in an emergency, when a robot, for example, has to instantly detect and locate the source of a chemical leak or a hidden biological weapon.

But, says Wired.com's Anthony, while robots modeled on moths are one way to go ...

Of course, another possibility is that we simply keep the moths. After all, why should we spend time and money on an artificial system when mother nature, as always, has already done the hard work for us? In much the same way that miners used canaries and border police use sniffer dogs, why shouldn't robots be controlled by insects? The silk moth is graced with perhaps the most sensitive olfactory system in the world. For now it might only be sensitive to not-so-useful scents like the female sex pheromone, but who's to say that genetic engineering won't allow for silk moths that can sniff out bombs or drugs or chemical spills?

I can imagine Bruce Willis, peering through a window, sweat trickling off his brow, his muscles tense as he catches a brief glimpse of a mysterious chemical seeping from a pipe inside Good Guy Headquarters. He smells nothing. Nobody does. But they dare not enter the room ... unless ... UNLESS ...

"Send in the silk moths," he says