Accessibility links
What Is It About Bees And Hexagons? : Krulwich Wonders... Bees could build flat honeycombs from just three shapes: squares, triangles or hexagons. But for some reason, bees choose hexagons. Always "perfect" hexagons. Why?

What Is It About Bees And Hexagons?

What Is It About Bees And Hexagons?

Solved! A bee-buzzing, honey-licking 2,000-year-old mystery that begins here, with this beehive. Look at the honeycomb in the photo and ask yourself: (I know you've been wondering this all your life, but have been too shy to ask out loud ... ) Why is every cell in this honeycomb a hexagon? 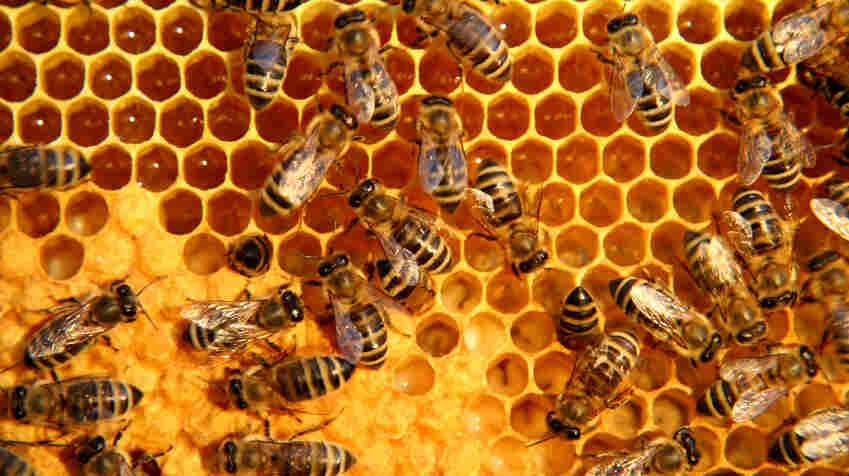 Bees, after all, could build honeycombs from rectangles or squares or triangles ... 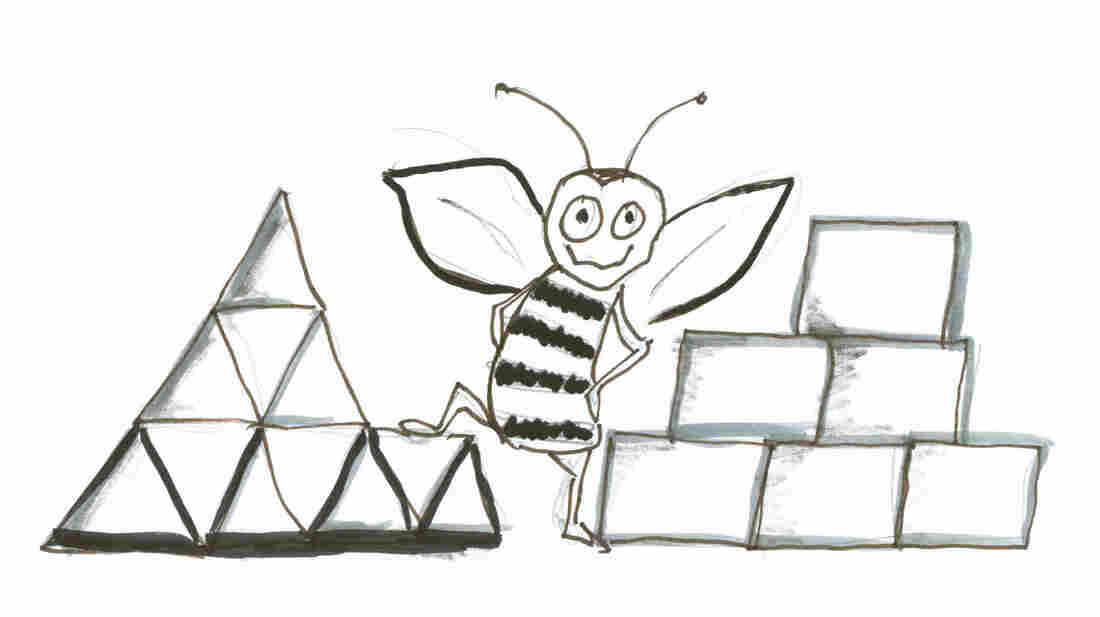 But for some reason, bees choose hexagons. Always hexagons. 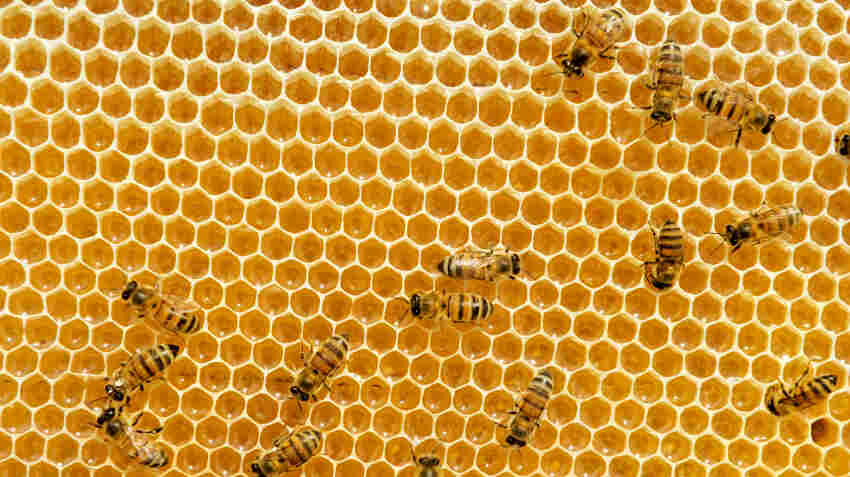 And not just your basic six-sided hexagon. They like "perfect" hexagons, meaning all six sides are of equal length. They go for the jewelers' version — precise, just so. Why? 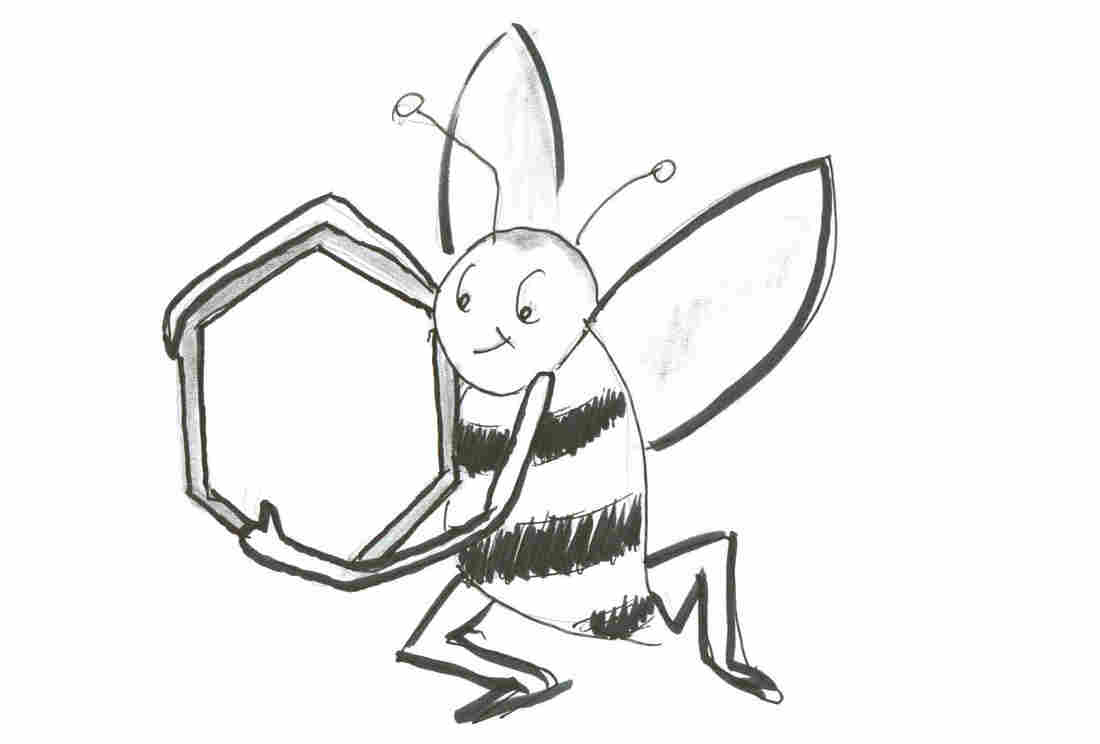 Well, this is a very old question. More than 2,000 years ago, in 36 B.C., a Roman soldier/scholar/writer, Marcus Terentius Varro, proposed an answer, which ever since has been called "The Honeybee Conjecture." Varro thought there might be a deep reason for this bee behavior. Maybe a honeycomb built of hexagons can hold more honey. Maybe hexagons require less building wax. Maybe there's a hidden logic here.

I like this idea — that below the flux, the chaos of everyday life there might be elegant reasons for what we see. "The Honeybee Conjecture" is an example of mathematics unlocking a mystery of nature, so here, with help from physicist/writer Alan Lightman, (who recently wrote about this in Orion Magazine) is Varro's hunch.

Honeycombs, we all know, store honey. Honey is obviously valuable to bees. It feeds their young. It sustains the hive. It makes the wax that holds the honeycomb together. It takes thousands and thousands of bee hours, tens of thousands of flights across the meadow, to gather nectar from flower after flower after flower, so it's reasonable to suppose that back at the hive, bees want a tight, secure storage structure that is as simple to build as possible.

So how to build it? Well, suppose you start your honeycomb with a cell like this ... a totally random shape, no equal sides, just a squiggle ... 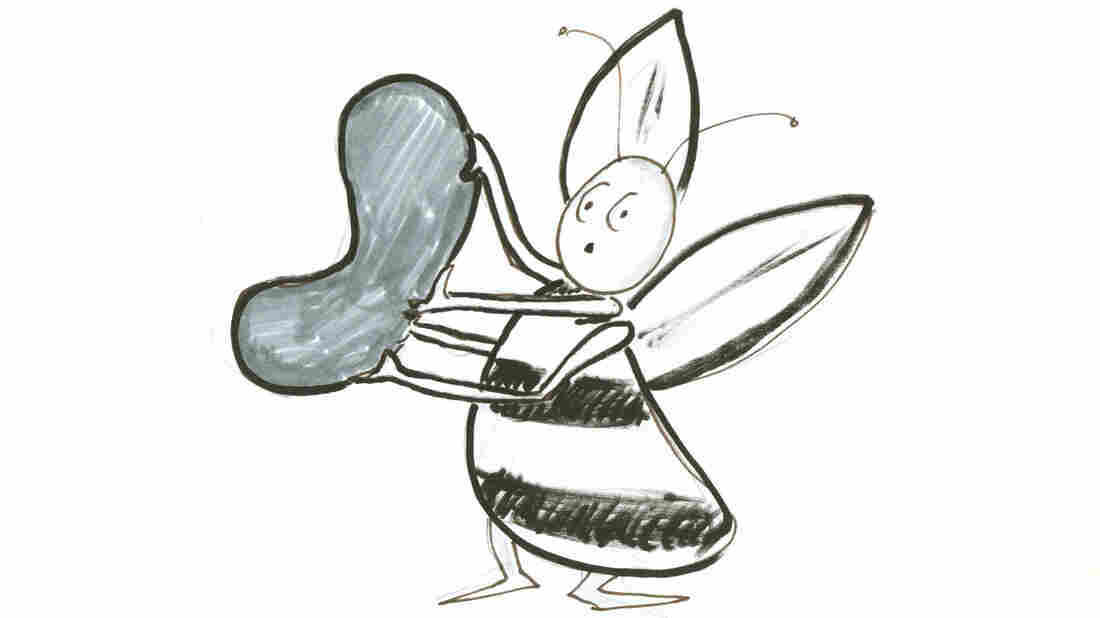 If you start this way, what will your next cell look like? Well, you don't want big gaps between cells. You want the structure tight. So the next cell will have to be customized to cling to the first, like this ... 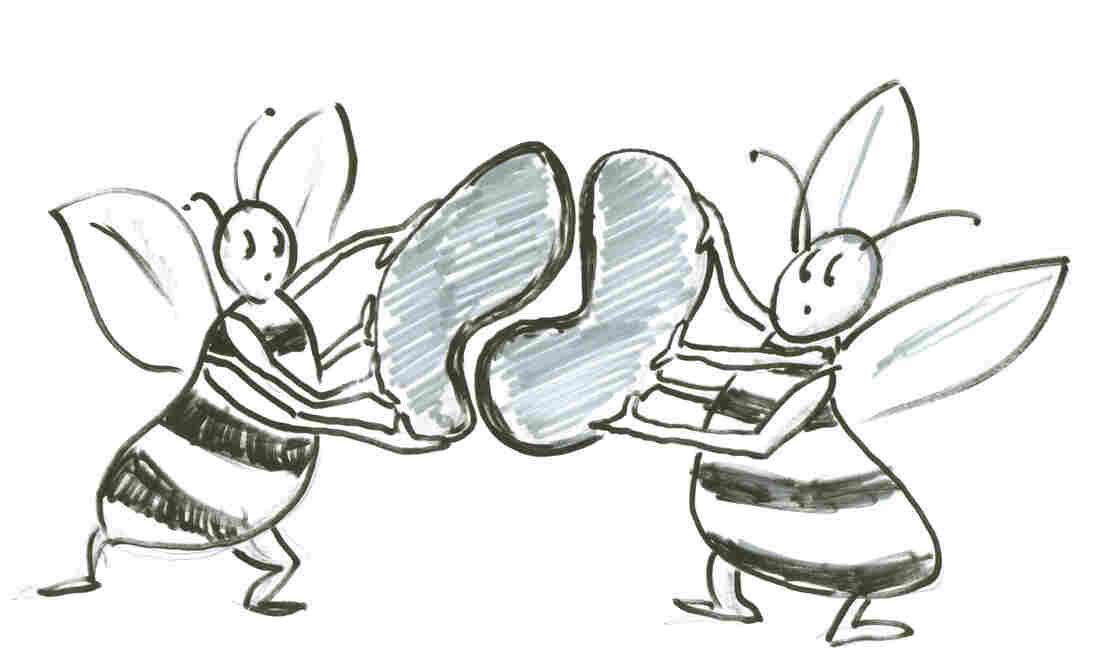 And the third cell, once again, will have to be designed to fit the first two. Each cell would be a little different, and that means, says Alan Lightman ...

... this method of constructing a honeycomb would require that the worker bees work sequentially, one at a time, first making once cell, then fitting the next cell to that, and so on.

But that's not the bee way. Look at any YouTube version of bees building a honeycomb, says Alan, and you won't see a lot of bees lounging about, waiting for their turn to build a cell. Instead, everybody's working. They do this collectively, simultaneously and constantly.

So a "squiggle cell plan" creates idle bees. It wastes time. For bees to assemble a honeycomb the way bees actually do it, it's simpler for each cell to be exactly the same. If the sides are all equal — "perfectly" hexagonal — every cell fits tight with every other cell. Everybody can pitch in. That way, a honeycomb is basically an easy jigsaw puzzle. All the parts fit. 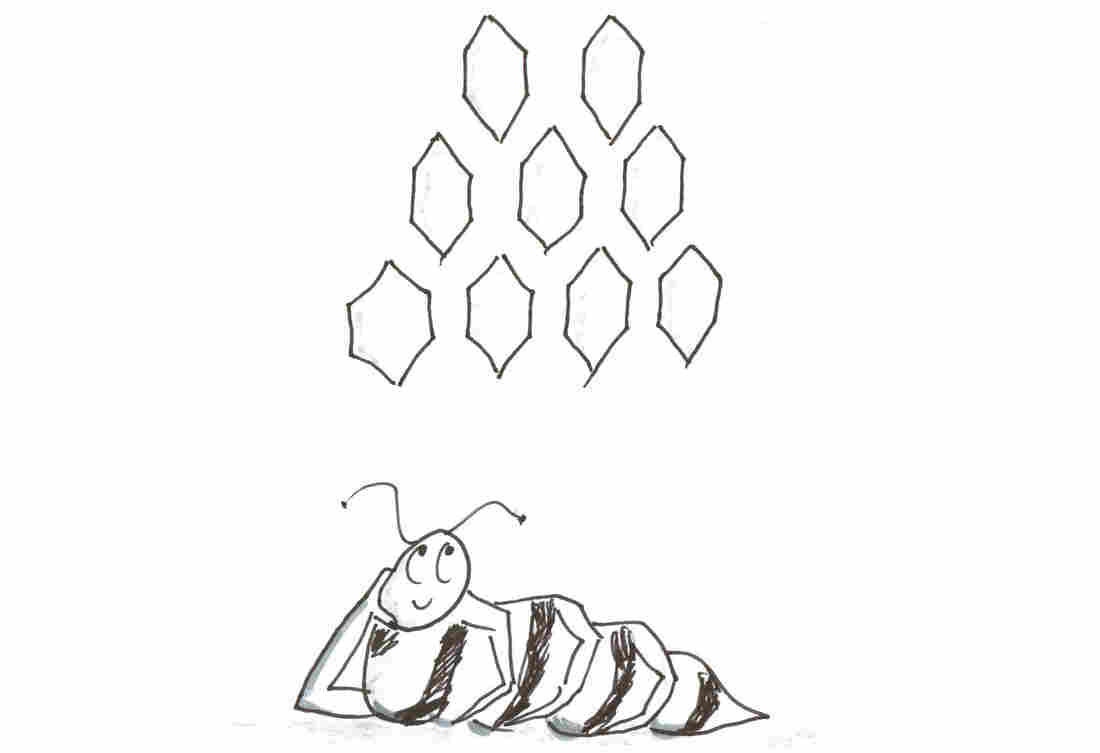 OK, that explains why honeycomb cells are same-sized. But back to our first question: Why the preference for hexagons? Is there something special about a six-sided shape?

Some shapes you know right away aren't good. A honeycomb built from spheres would have little spaces between each unit ... 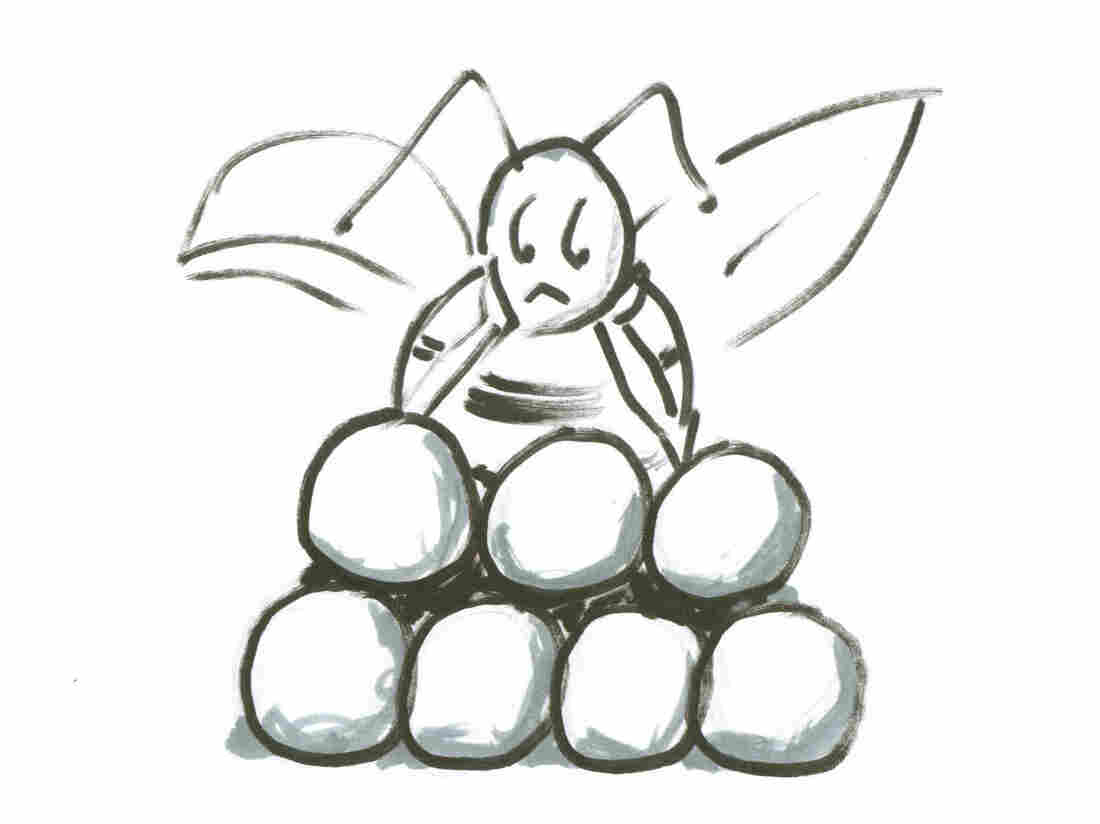 ... creating gaps that would need extra wax for patching. So you can see why a honeycomb built from spheres wouldn't be ideal. Pentagons, octagons also produce gaps. What's better?

"It is a mathematical truth," Lightman writes, "that there are only three geometrical figures with equal sides that can fit together on a flat surface without leaving gaps: equilateral triangles, squares and hexagons." 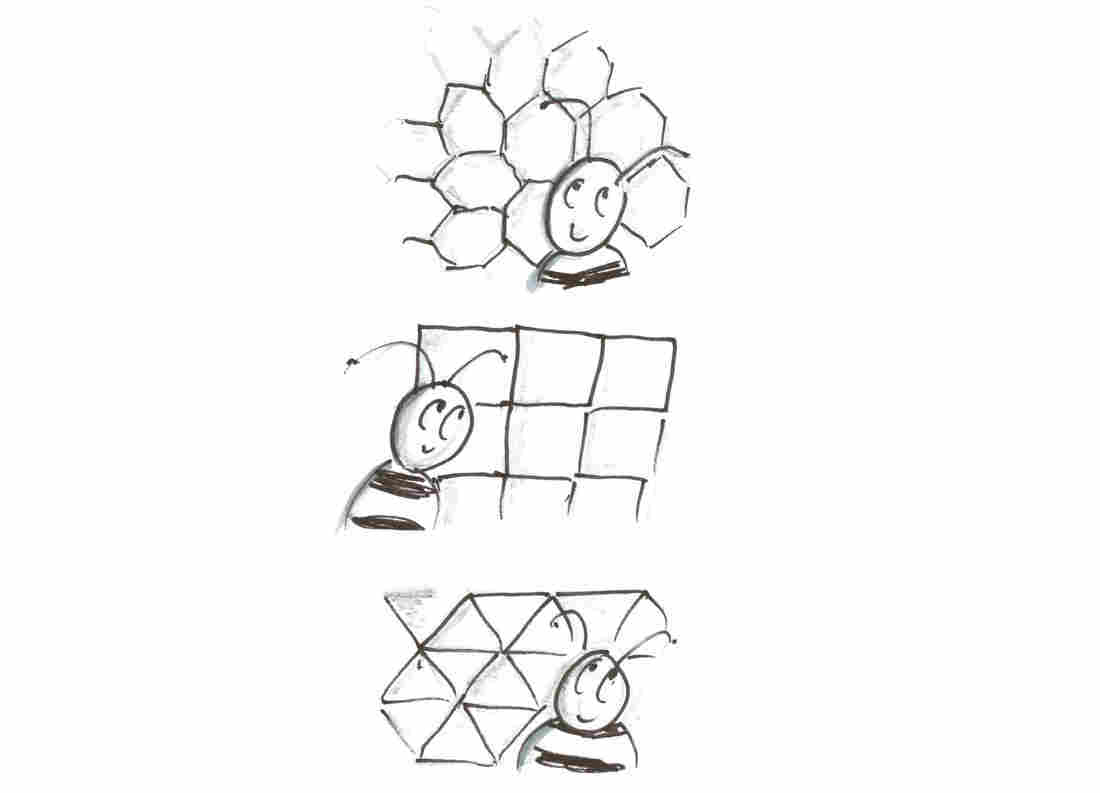 So which to choose? The triangle? The square? Or the hexagon? Which one is best? Here's where our Roman, Marcus Terentius Varro made his great contribution. His "conjecture" — and that's what it was, a mathematical guess — proposed that a structure built from hexagons is probably a wee bit more compact than a structure built from squares or triangles. A hexagonal honeycomb, he thought, would have "the smallest total perimeter." He couldn't prove it mathematically, but that's what he thought.

Compactness matters. The more compact your structure, the less wax you need to construct the honeycomb. Wax is expensive. A bee must consume about eight ounces of honey to produce a single ounce of wax. So if you are watching your wax bill, you want the most compact building plan you can find.

[The honeycomb is] absolutely perfect in economizing labor and wax.

Two thousand thirty-five years after Marcus Terentius Varro proposed his conjecture, a mathematician at the University of Michigan, Thomas Hales, solved the riddle. It turns out, Varro was right. A hexagonal structure is indeed more compact. In 1999, Hales produced a mathematical proof that said so.

As the ancient Greeks suspected, as Varro claimed, as bee lovers have always thought, as Charles Darwin himself once wrote, the honeycomb is a masterpiece of engineering. It is "absolutely perfect in economizing labor and wax."

The bees, presumably, shrugged. As Alan Lightman says, "They knew it was true all along."

Alan Lightman's essay "The Symmetrical Universe," originally published in Orion Magazine, will be included in his new book The Accidental Universe: The World You Thought You Knew to be published early next year. I also recommend Ivars Peterson's essay in Science News, The Honeycomb Conjecture.