Accessibility links
The Boomerang Graffito (Or Bad, Bad, Luther B!) : Krulwich Wonders... Be really careful when you carve your name onto an ancient Egyptian temple. Not because it's wrong (which it is), but because sometimes the temple comes back to haunt you. The true story of Luther Bradish, an American spy who didn't keep his secret.

The Boomerang Graffito (Or Bad, Bad, Luther B!)

The Boomerang Graffito (Or Bad, Bad, Luther B!)

I was standing in New York's Metropolitan Museum of Art the other day, where there's a full-sized Egyptian temple, called Dendur. It's housed under a glass roof ... 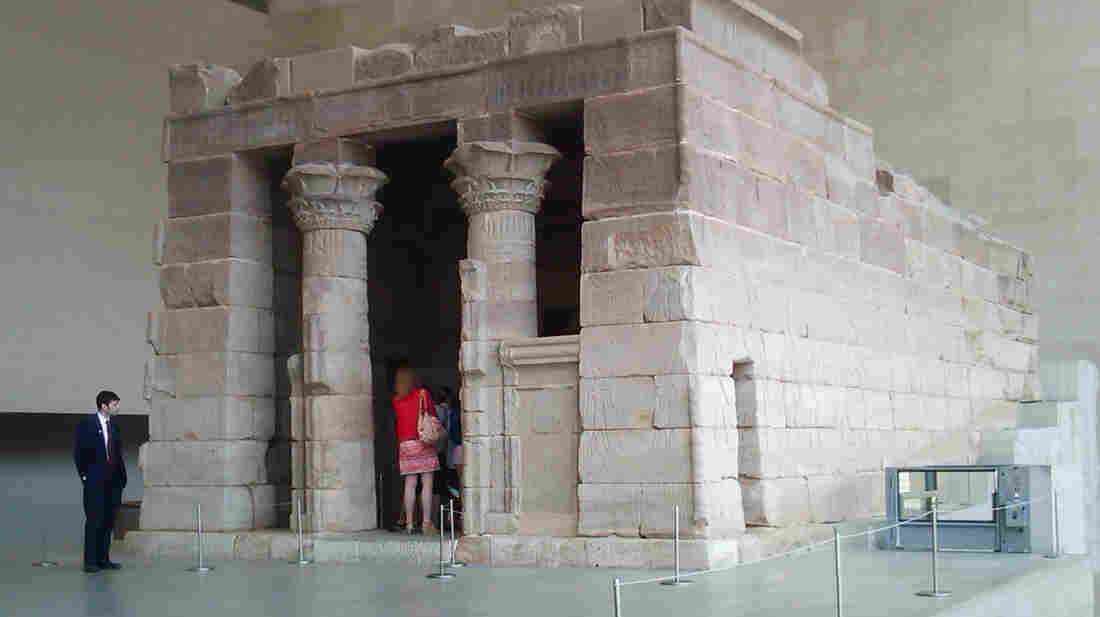 And standing there, gazing at profiles of Egyptian nobles etched onto the limestone, I noticed a bunch of what we now call "tags" — basically graffiti, carved by tourists, who back in the early 1800s made a habit of carving their names onto the places they visited. Basically, it's a "Hey, I was here!" thing. Here's the first one I saw, inside Dendur, carved by somebody named "L. Politi" in 1819. And alongside it, in smaller letters just down to the left, is "Drovetti, 1816." 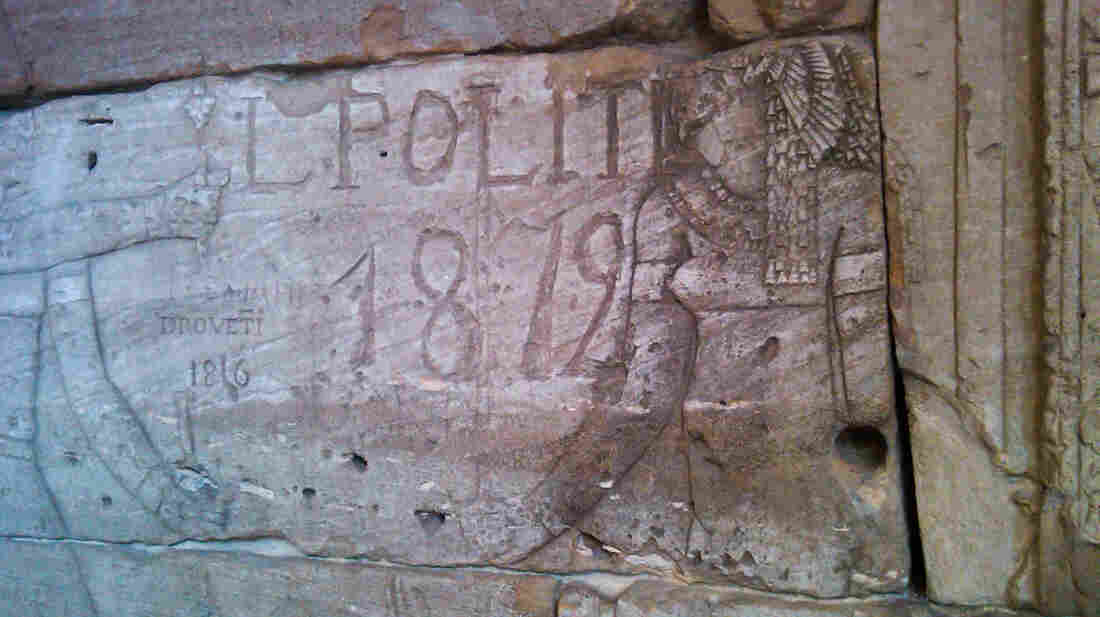 Of course, when you see your first ones, you start looking for more, and because Napoleon brought an army to Egypt, thousands of young guys with bayonets and spare time visited ancient sites. That's why Egyptian artifacts are covered with graffiti. Check just below this guy's beard at Abu Simbel: 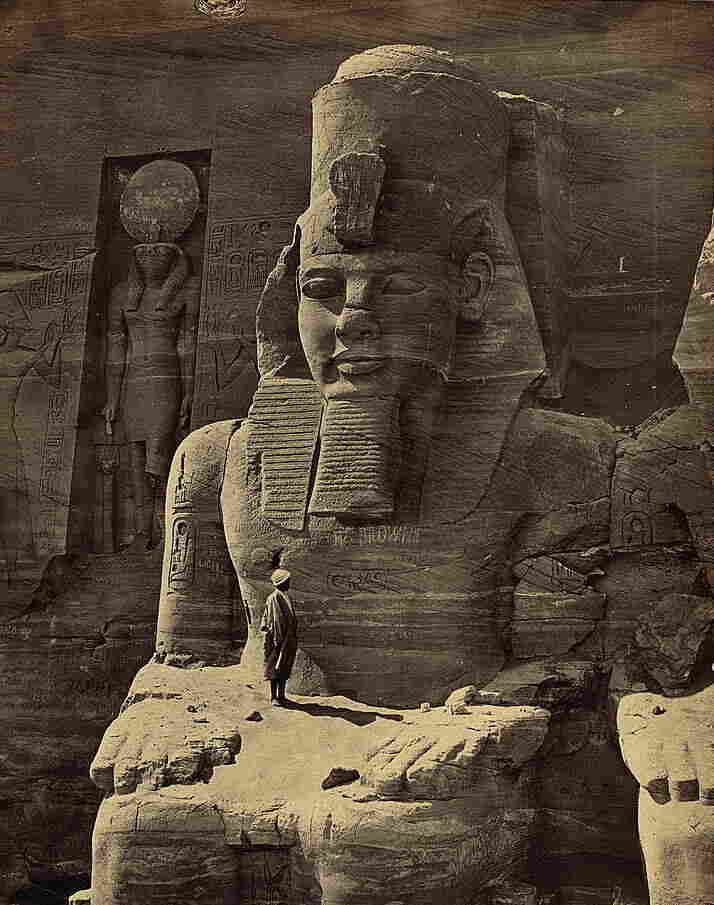 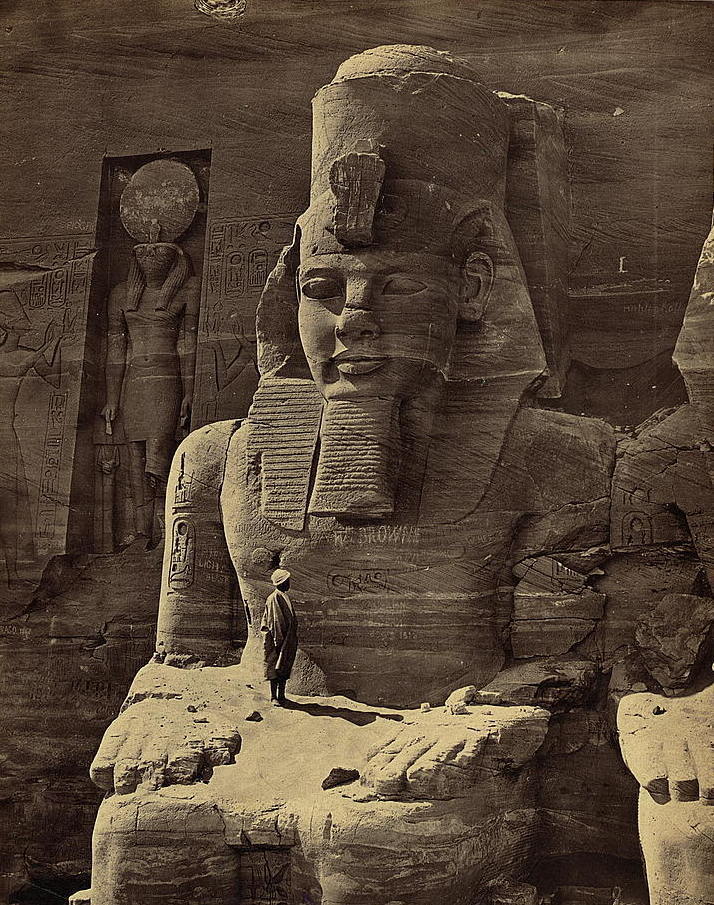 But here at the Met, looking for names, I suddenly saw something that made me stop short. "Oh," I thought. "This is very bad luck."

There, sitting right next to a carved Egyptian figure, an obviously important official — straight in his line of sight — was a graffito from someone named "L. Brad--" (couldn't read the rest of it) who added "of NY US." The date was 1821. The "2" doesn't look like a "2," but it is. 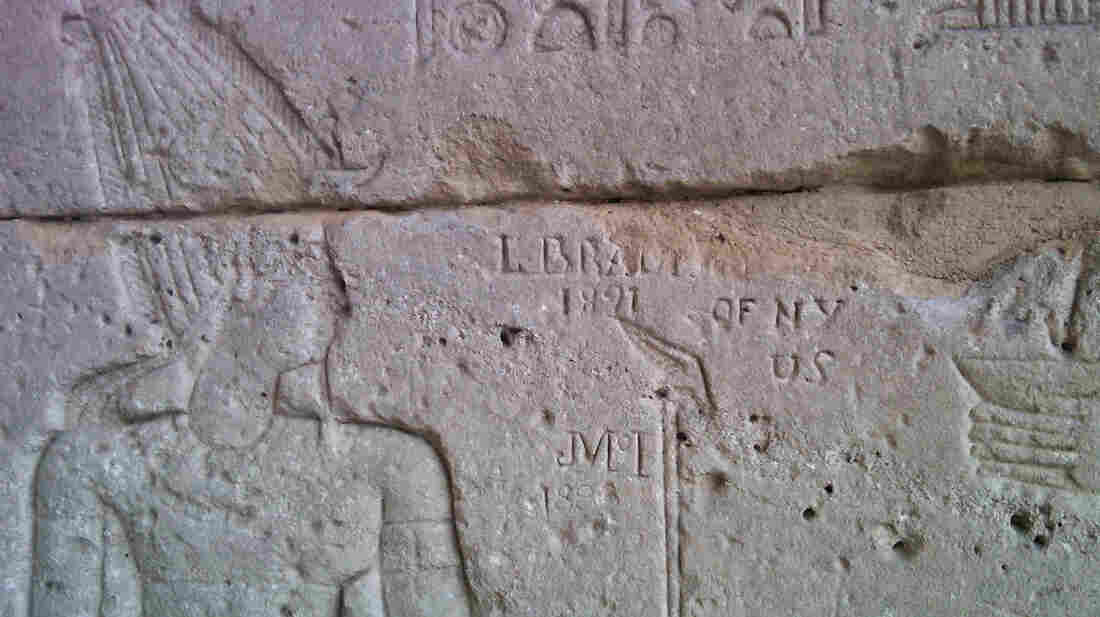 Think about this. A guy (I figure it was a guy) from New York, heads off to Egypt, makes his way up the Nile to an obscure little temple called Dendur. When nobody's looking (I figure, even in 1821, they didn't allow tourists to carve autographs), he does his dirty little deed and then disappears, going back, we hope, to America. His small indiscretion is a secret. It's one of those "What happens in Las Vegas stays in Las Vegas" things — except for this unfortunate coda.

The tag that he illegally carved ... 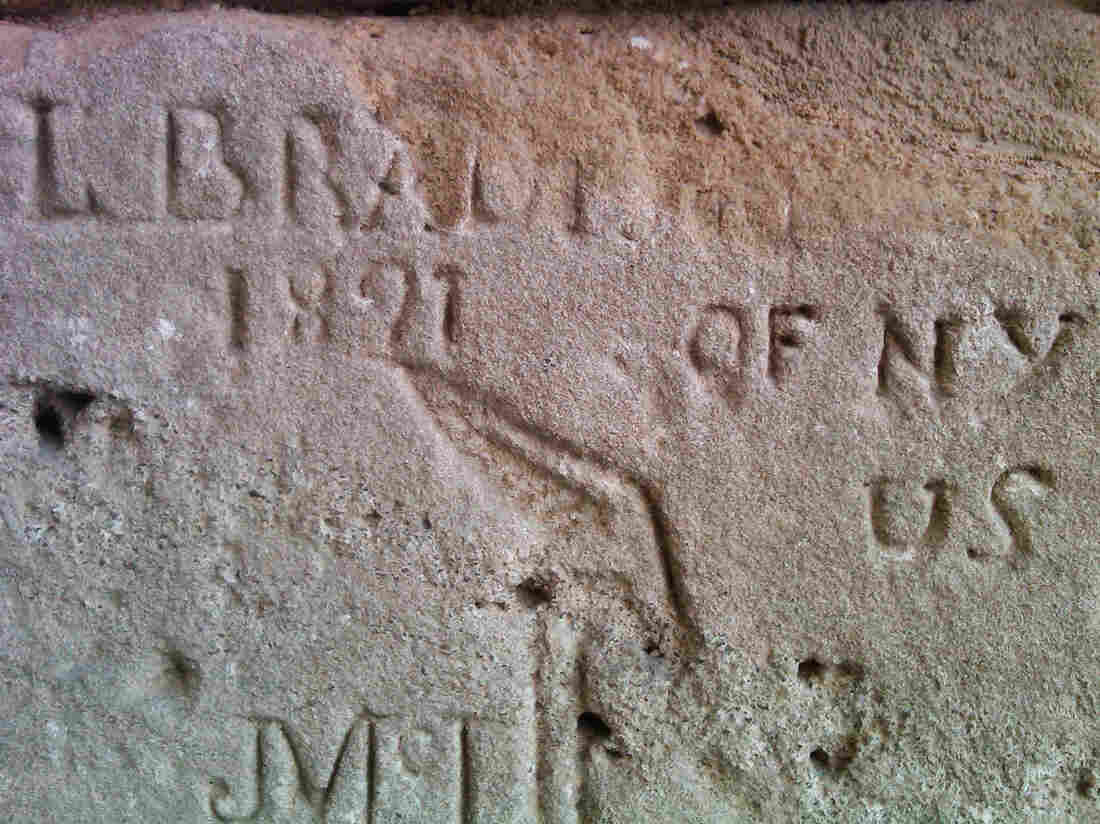 And the walls it was attached to, and the roof and the columns ...

In fact, the whole temple, was lifted up, shipped, unpacked and placed smack in the middle of New York City in 1978, in one of the most visited institutions in the world, where tens of thousands, no, hundreds of thousands of people peer at it and discover a homeboy, "L. Brad--" advertising himself.

"L" in his wildest moments couldn't have imagined this. Nobody could. It's embarrassing, in a charming way.

So I wondered, who is this "L. Brad--"? Do we know anything about him? Well, it turns out (thank you, Egle Zygas, press officer at the Met) we do. What I learned made my smile even wider because "L. Brad--" later in life became a Somebody — who wouldn't want it known that he'd tagged a temple. 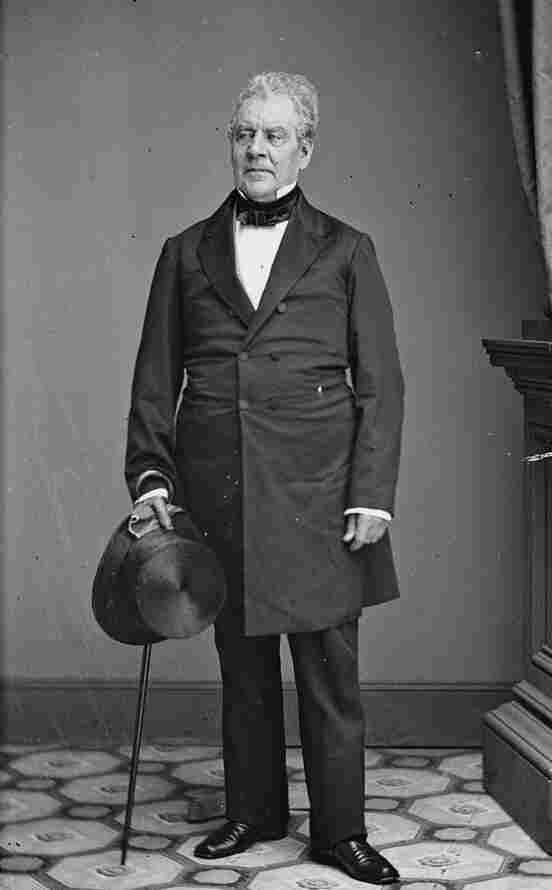 According to a scholar named Cyril Aldred, "L. Brad--" was Luther Bradish, who served in the U.S. Army, fought in the War of 1812, became a lawyer and then became an agent — I think the modern word for it would be spy, sent by President Monroe to Constantinople, to figure out who to talk to about all the pirates chasing American ships in the Mediterranean.

Bradish, it turns out, wasn't very good at intelligence gathering, but somewhere during his stay, he slipped down to Egypt and visited Dendur and carved his name into the limestone. Why a secret agent would do that, I don't know. 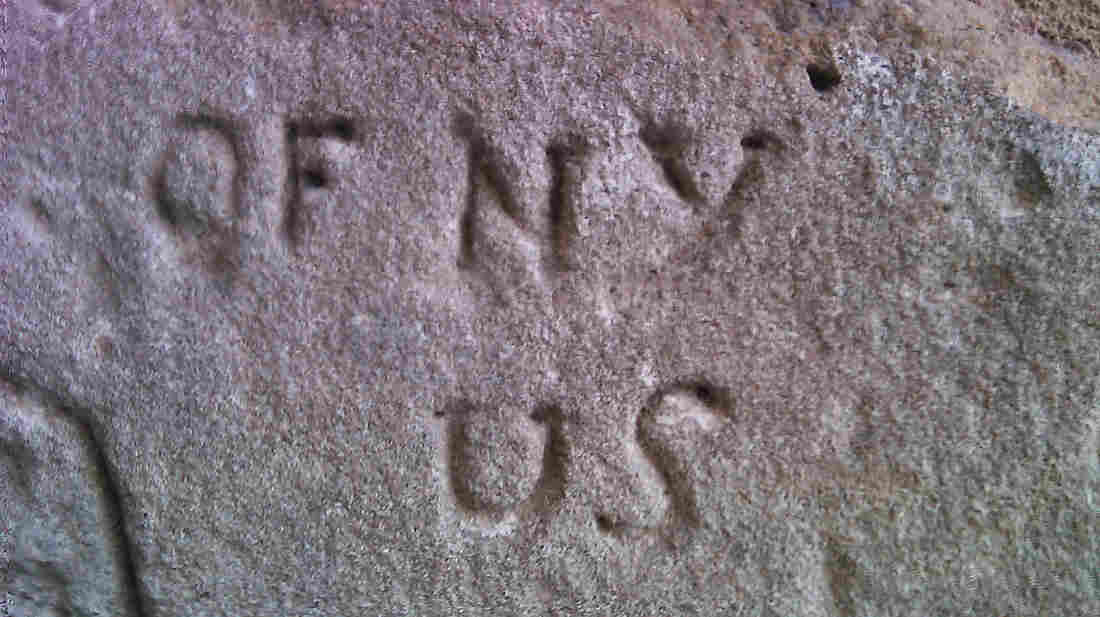 But the important thing is, when he returned to New York, Luther Bradish became very, very respectable. He was elected to the New York State Assembly, became its speaker, then became lieutenant governor of New York, ran for governor, lost and spent the later part of his life as — consider the irony here — president of the New-York Historical Society — an organization dedicated to the preservation and protection of old things.

Luther Bradish was buried in Brooklyn, in Greenwood Cemetery. The marker, of course, makes no reference to his travels to Egypt, but I have, at no one's invitation, thought up a a few appropriate lines:

Wrote It on a Temple Wall,

Then fled the scene that bears his scrawl

But rather than say, Bye, Shalom,

The Wall then followed Luther home

No doubt some of you know Temple Tagging is still practiced by modern tourists, most recently by a 15-year-old middle school student from Nanjing, China. Ding Jinhao was in Egypt with his parents, and when nobody was looking he scratched "Ding Jinhao was here" onto a 3,500-year-old temple carving at the Temple of Luxor. Another Chinese tourist, Shen Yuwen, noticed and took this picture. 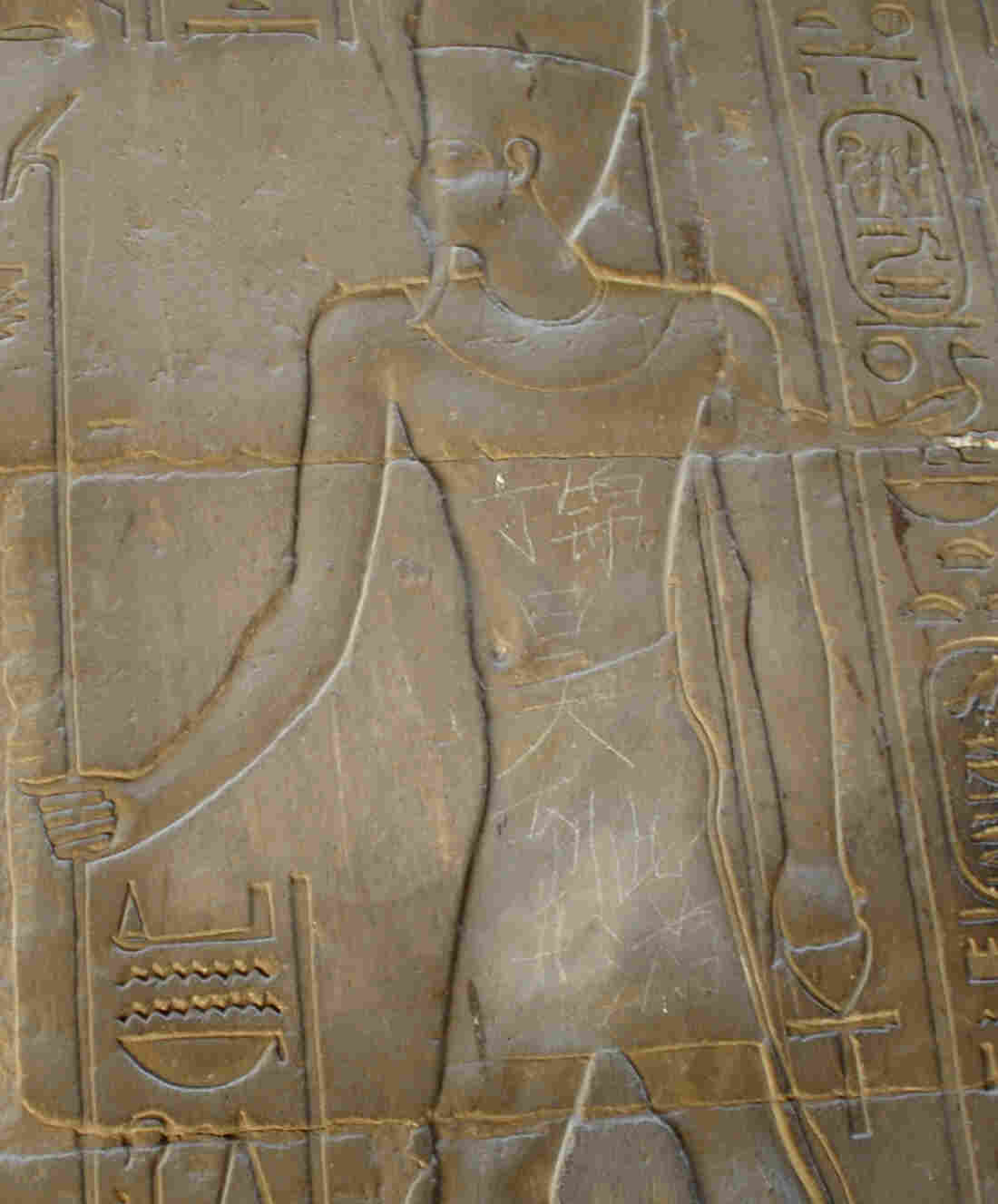 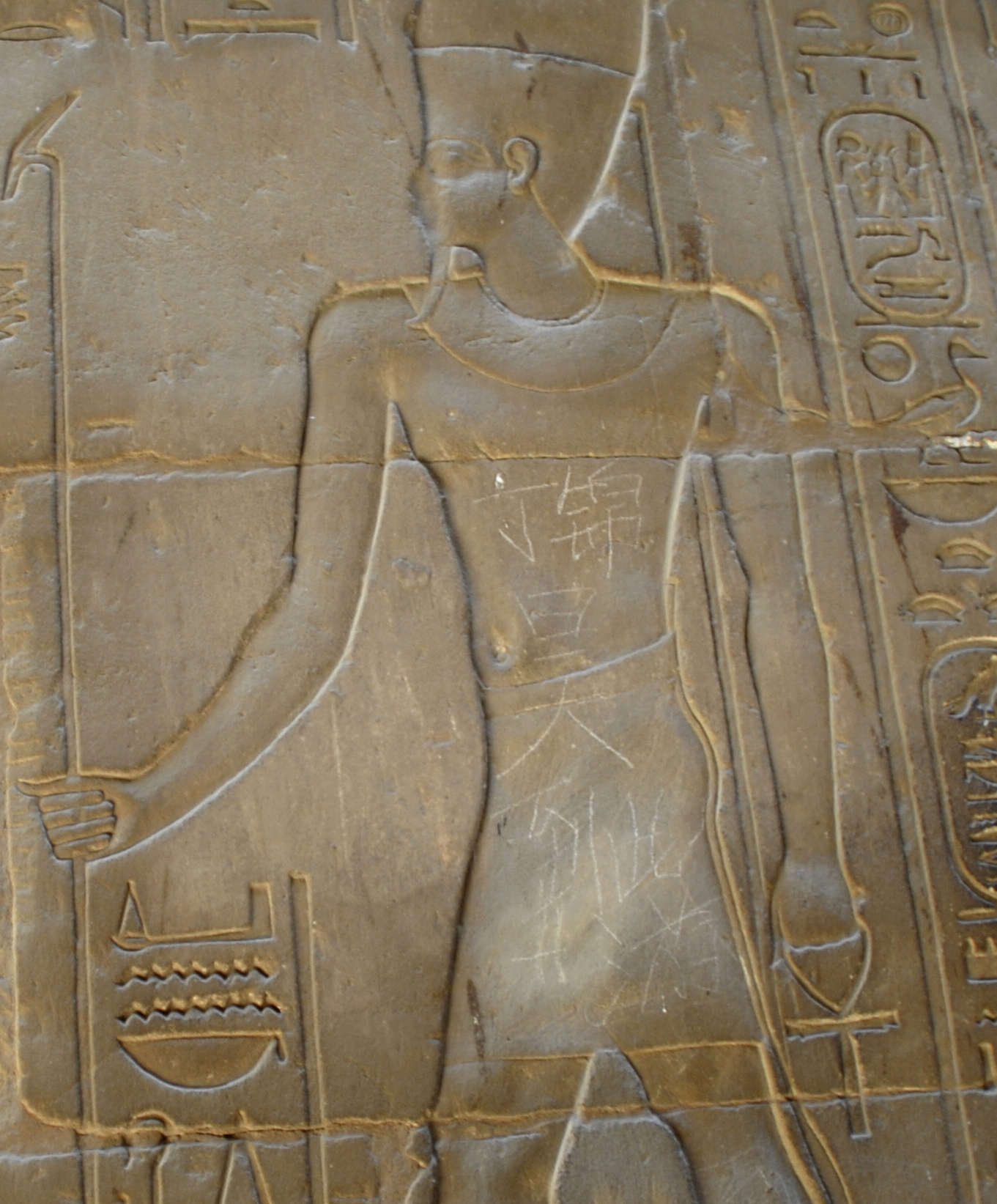 Last week this photo very quickly went viral. Ding Jinhao was identified online. Thousands of people called him a national disgrace; some sent death threats. Ding's mother told a local paper, "We want to apologize to the Egyptian people and to the people who have paid attention to this case across China." She then added that her son "cried all night." He was so ashamed.