Accessibility links
Why Dolphins Make Us Nervous : Krulwich Wonders... India has just banned dolphin entertainment parks. They are "morally unacceptable," says a government ministry. Meanwhile, on the other side of the planet, the U.S. Navy announced that 24 dolphins trained to sniff for underwater mines will be replaced by robots. We are definitely confused about dolphins.

What is it about dolphins? They have very, very big brains, and that makes we humans, whose brains are nothing to sniff at, nervous. We don't know what to make of them. 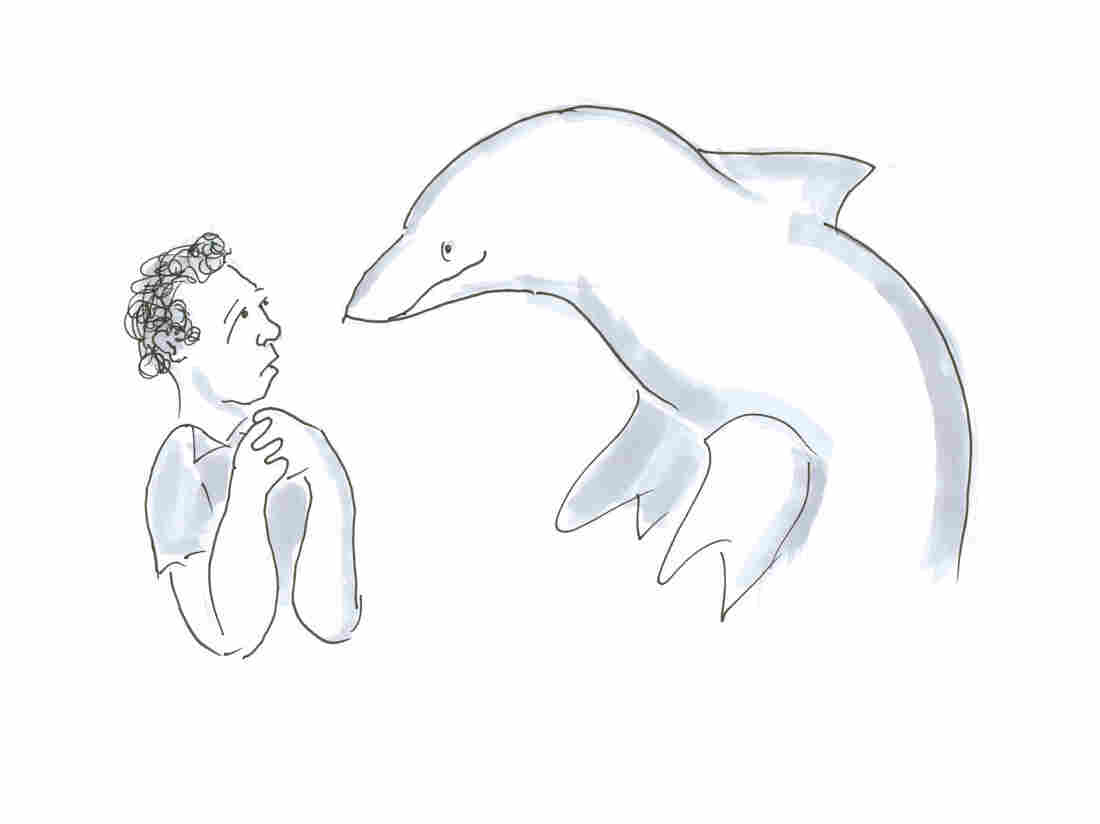 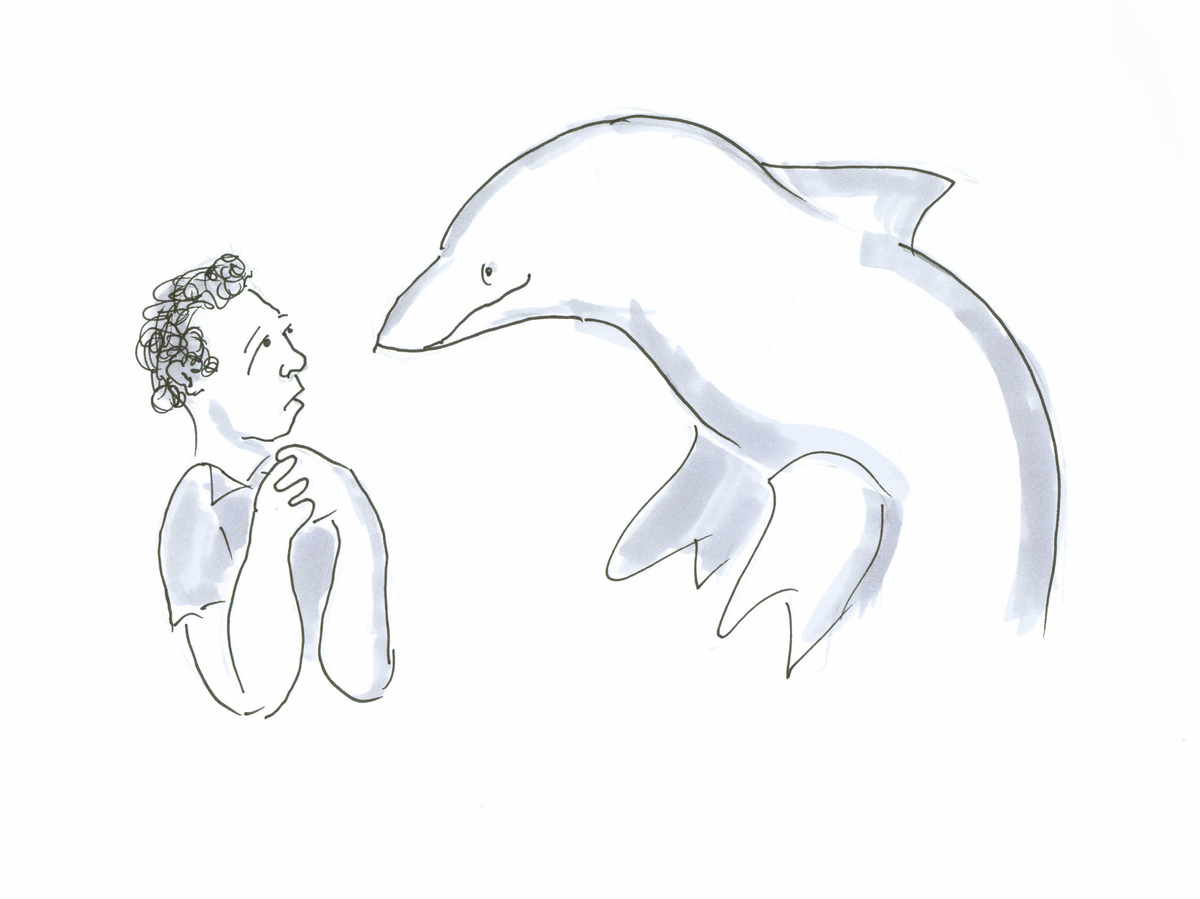 The latest example: On May 17 in India, the Ministry of Environment and Forests issued an order to all Indian states banning dolphin amusement parks. No leaping out of pools to catch balls, no jumping through hoops. Forcing dolphins to entertain humans, the ministry said, was morally unacceptable.

"Cetaceans [dolphins, whales and porpoises] in general are highly intelligent and sensitive," the Ministry said, "and various scientists who have researched dolphin behavior have suggested that [they have] unusually high intelligence ... compared to other animals."

This means, the Indian ministry went on: "that dolphins should be seen as 'non-human persons' and as such should have their own specific rights." "Non-human persons" — what a pregnant phrase! People-like, but not like people. 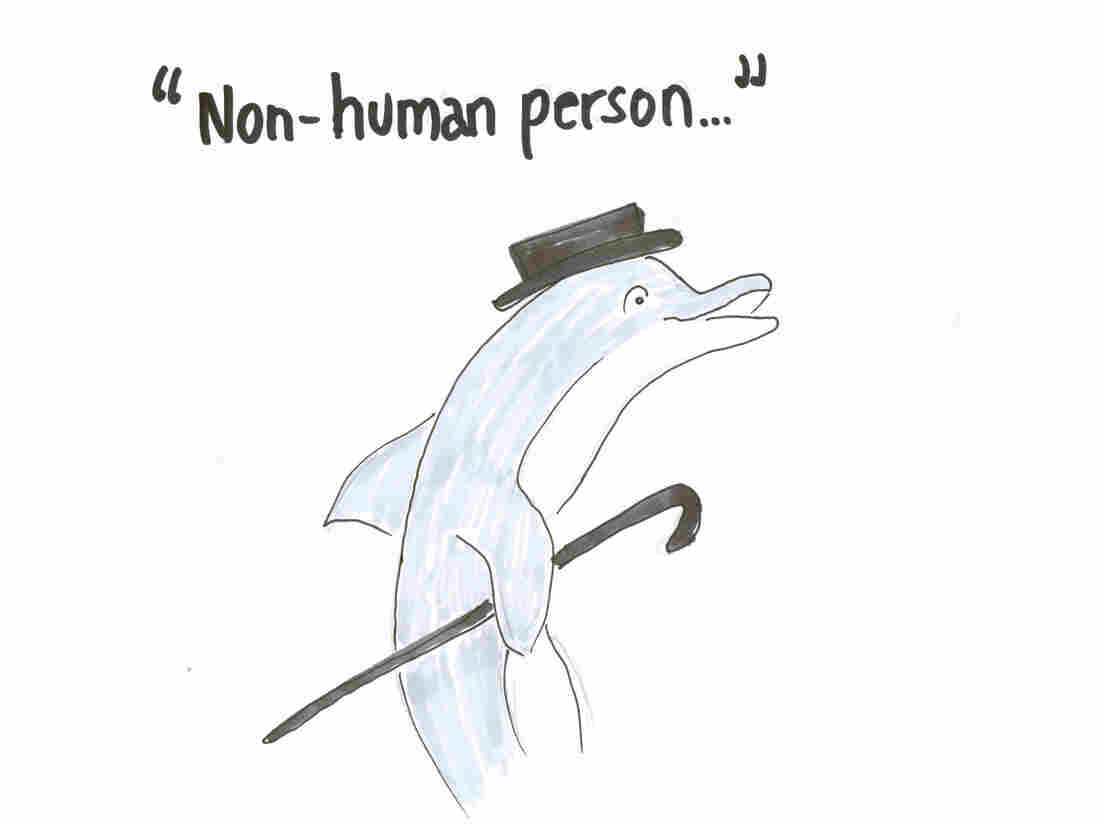 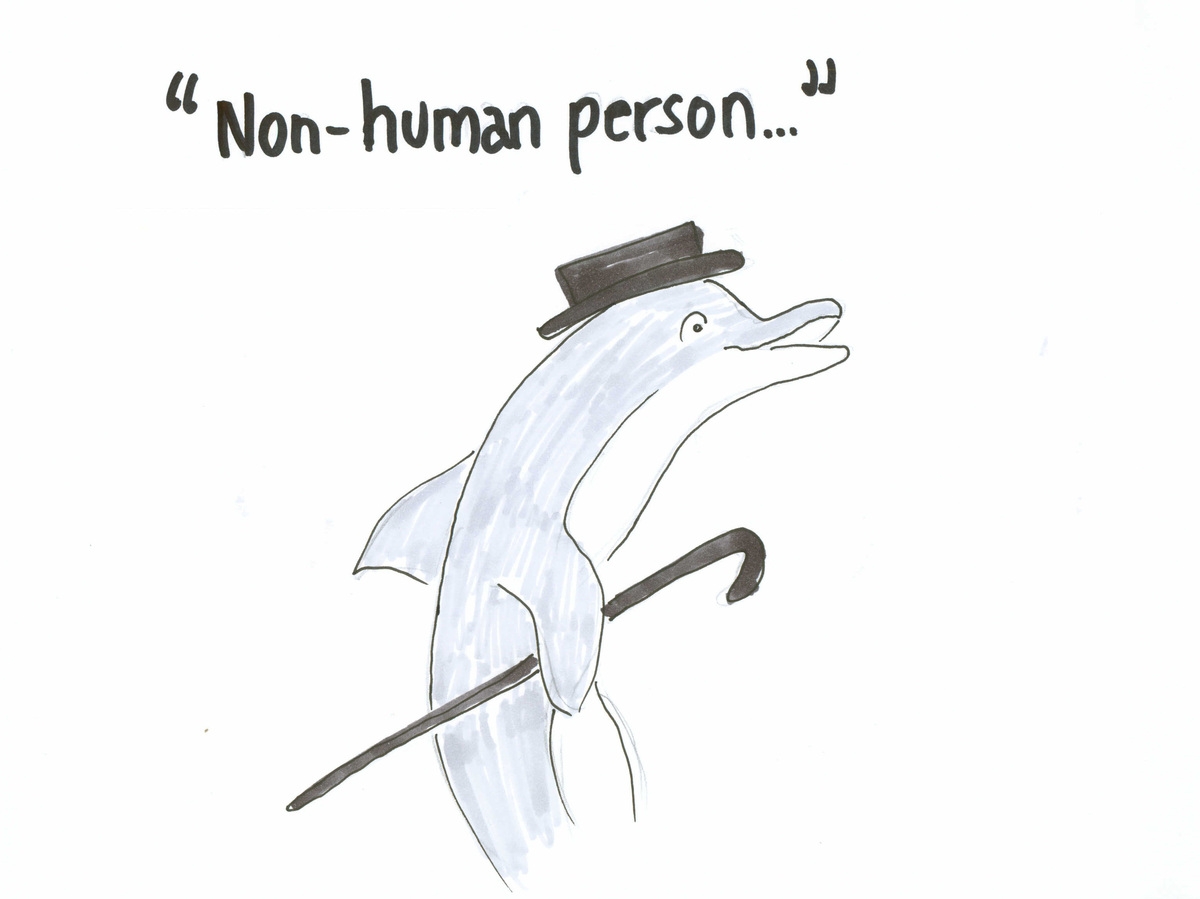 India's putting dolphins (and the other cetaceans) into a new legal category that classifies them as beings nearer to ourselves, with an emotional life that, if we could talk to them, or listen in to whatever they're saying, we might find familiar. I'm thinking of the famous New Yorker cartoon that shows two dolphins swimming side-by-side, where one of them says to another, "If I could do only one thing before I died, it would be to swim with a middle aged couple from Connecticut." (Which you can see here.)

You may giggle, but the joke hurts. Big-brained animals almost certainly wouldn't want to spend years lugging polyester-skinned mammals across shallow swimming pools six days a week, or juggling colorful balls with their rostrums (noses). Their brains suggest they've got better things to do. What, we're not sure. All we know is, being a dolphin has to be a very different from being a person, an experience we can only guess at. 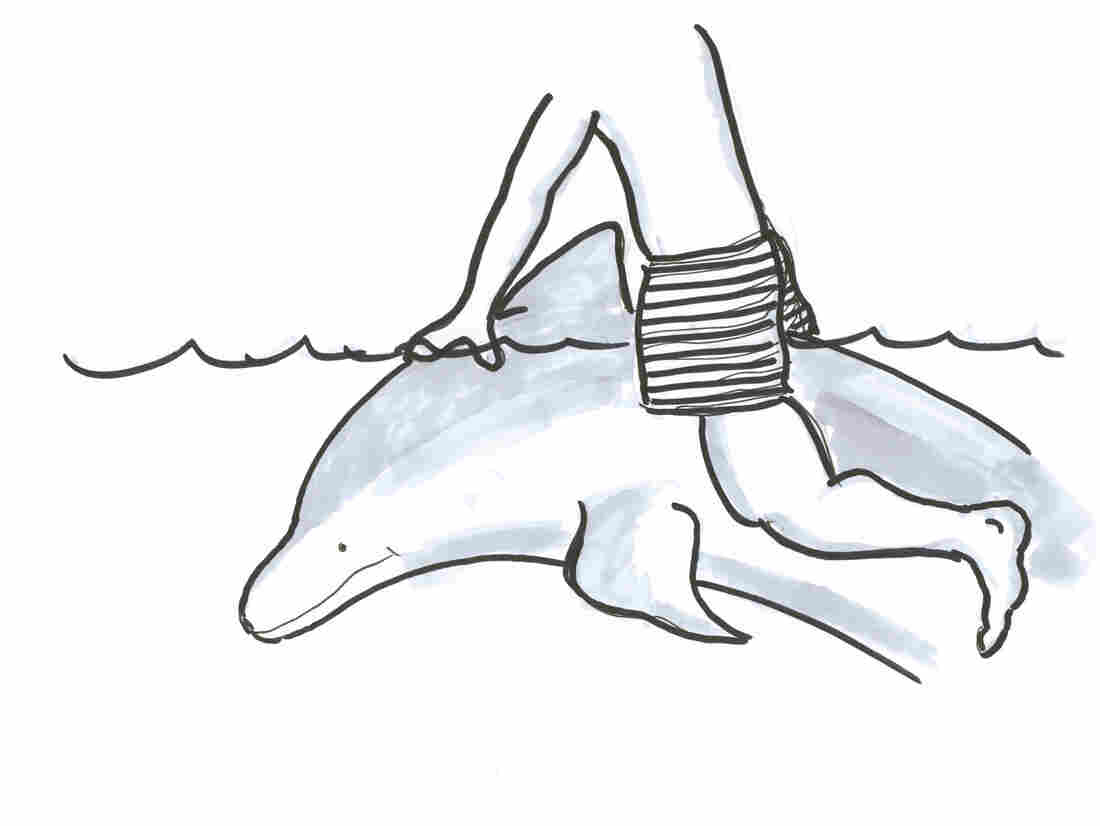 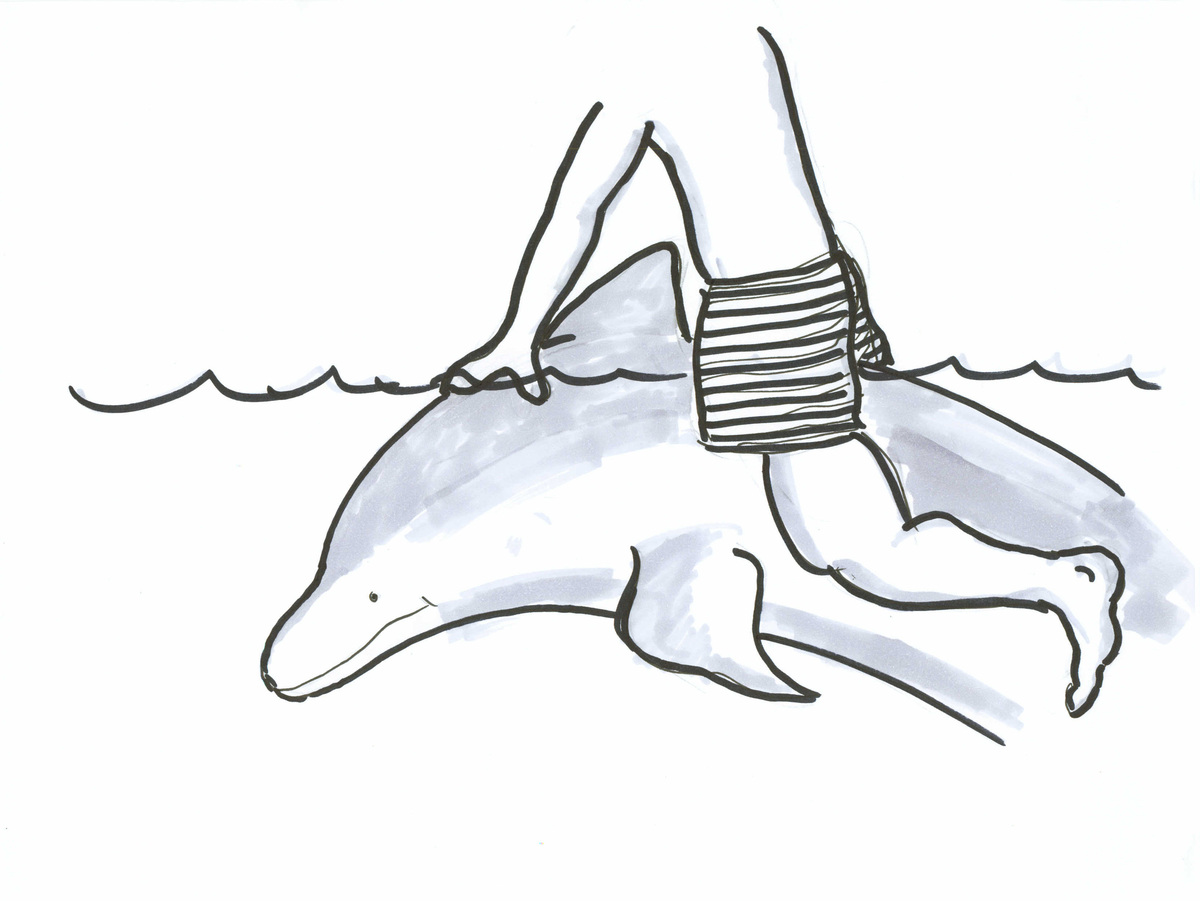 And yet, because of those brains, it's hard not to slip into thinking of them as if they were variants of us. This happened to me, instantly, last year, when I read that the U.S. Navy had decided to "retire" a group of mine-detecting dolphins, replacing them with robots.

Twenty-four dolphins, after years of service, were being "reassigned," the story said, so that sea drones, or unmanned underwater vehicles (UUVs, in Navy parlance) could take their place. The Navy had its reasons. The robots didn't need constant feeding, medical attention, cages and rest. They didn't need seven years of training. Robots could do the job on day one for less — much less. So the dolphins got sacked.

And I thought, what? And, instantly, each of those dolphins became a Norma Rae, fists (fins?) clenched, crying "UNFAIR!" After giving their whole careers to the Navy, sniffing for underwater mines to protect our ships and harbors, this is the thanks they get? That, of course, was my mind shouting; what the dolphins were thinking, if they even noticed the change, is anybody's guess. 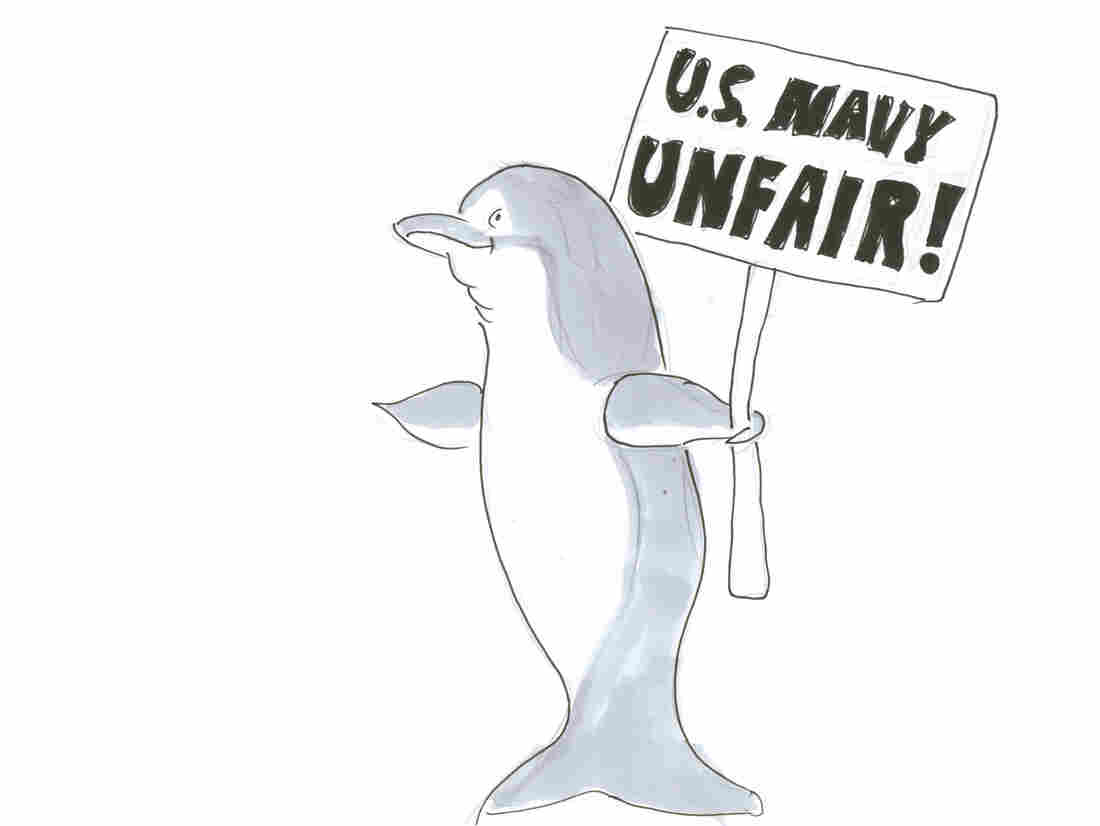 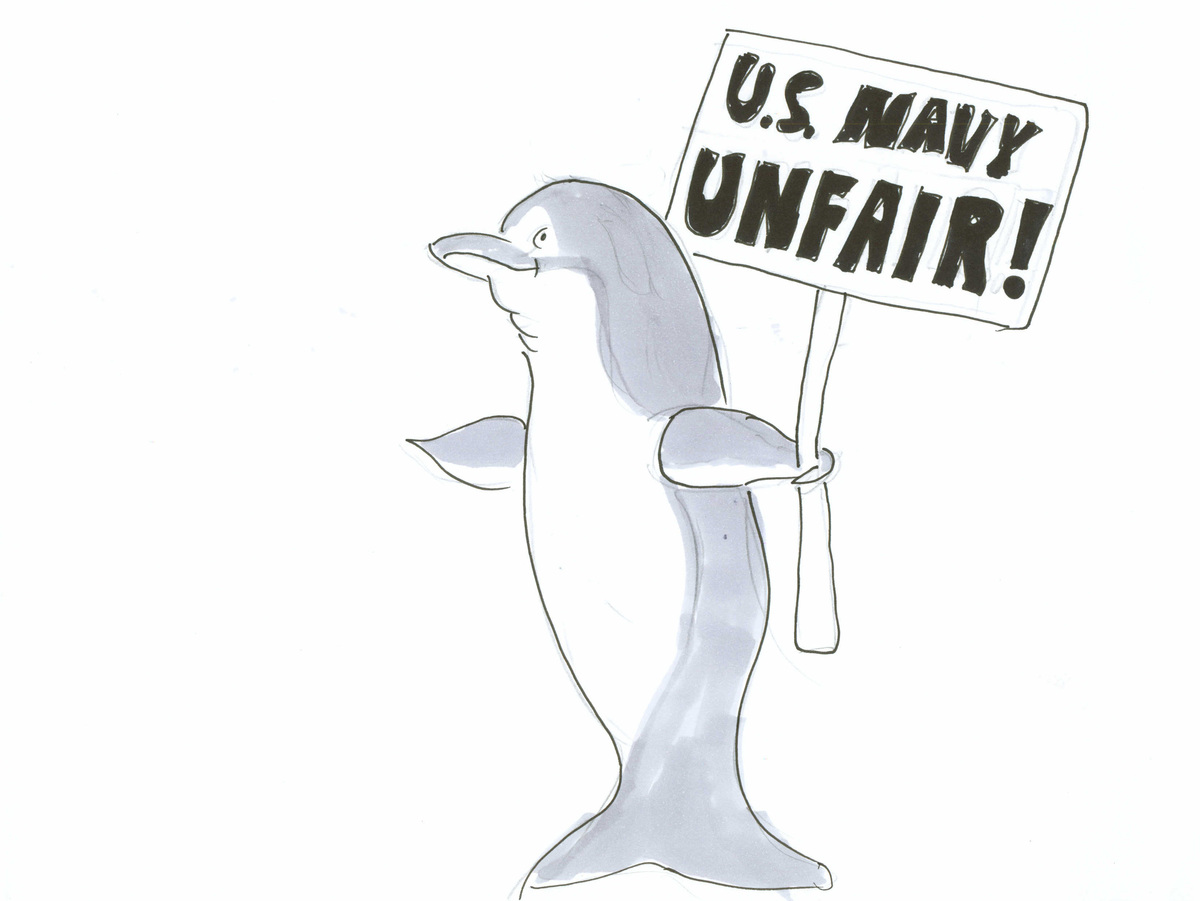 Which is the puzzle. The deep puzzle.

I can understand why an animal that looks like us, a gorilla or an orangutan, with their familiar faces and gestures would get our attention and respect. But dolphins don't blink like we do, don't gaze thoughtfully or frown (ever). Their faces are like masks, and yet, because an organ hidden in their heads, because their brain resembles ours in size, we ignore their different shape, their different habitat, their alien-ness, and we embrace them as "non-human persons."

To be fair, their brains are big. Lori Marino, a dolphin expert at Emory University, told Discovery News that dolphin brains are about "five times larger for their body size when compared to another animal of similar size," meaning their brains are almost as disproportionately large as ours. We are seven times the norm. "Not a huge difference," she says.

The part of the brain dedicated to abstract thinking, the neocortex, in a dolphin brain is "more highly convoluted than our own," she said, and it is her opinion that dolphins are capable of complex, subtle thinking. You don't have a brain like that for no reason.

We Haven't Cracked The Code

So what's the reason? Dolphin scientists assume these animals are very social and communicate constantly, and the brains they have are designed to manage all that inter-dolphin messaging. As to what they're talking about — we haven't cracked the code. But because we, the other big brained species, have used our brains to organize armies, to re-design landscapes, to invade the sky, to dominate all the continents and to wipe out almost all the other large animals, we may have the faint suspicion that if they choose, dolphins could do likewise. It's a possibility that we can't completely dismiss. We just don't know.

Well — that's not right. One of us knows. The late and very lamented British writer, satirist, and wildlife explorer Doug Adams, in Hitchhiker's Guide to the Galaxy, explained that "on the planet Earth, man had always assumed that he was more intelligent than dolphins because he had achieved so much — the wheel, New York, wars and so on — whilst all the dolphins had ever done was muck about in the water having a good time. But conversely, the dolphins had always believed that they were far more intelligent than man — for precisely the same reasons."

Maybe that's why they fascinate us. What if, after tens of thousands of years conquering and murdering and dominating, it turns out that leaping, diving and mucking around in the water is what the real smarties do?