Accessibility links
I Bet I Can Create A 25 Million-Year-Old False Alarm, Says Biologist E.O. Wilson : Krulwich Wonders... The world's most famous ant scholar likes a good prank. His secret fantasy, he told the novelist Michael Crichton, would be to steal a 25 million year old alarm signal from an ancient ant and use it to panic a modern nest. Oh, what fun! But can he do it?

I Bet I Can Create A 25 Million-Year-Old False Alarm, Says Biologist E.O. Wilson

I Bet I Can Create A 25 Million-Year-Old False Alarm, Says Biologist E.O. Wilson

The world's most famous ant-scholar likes to daydream. "So much good science — and perhaps all of great science," he writes in his new book "has its roots in fantasy."

After seeing Jurassic Park, where scientists clone dinosaurs from the blood of ancient dino-biting mosquitoes,Wilson thought: Hmmm, that's a little far-fetched, but I bet I can do a version that might be "really and truly possible."

He was having lunch with the author of the film, Michael Crichton, (who also wrote The Andromeda Strain and TV's ER) when he outlined his plan. I can imagine Crichton leaning in, itchy with expectation. Nobody knows ants like Wilson. And Wilson likes to live dangerously (especially in his head). 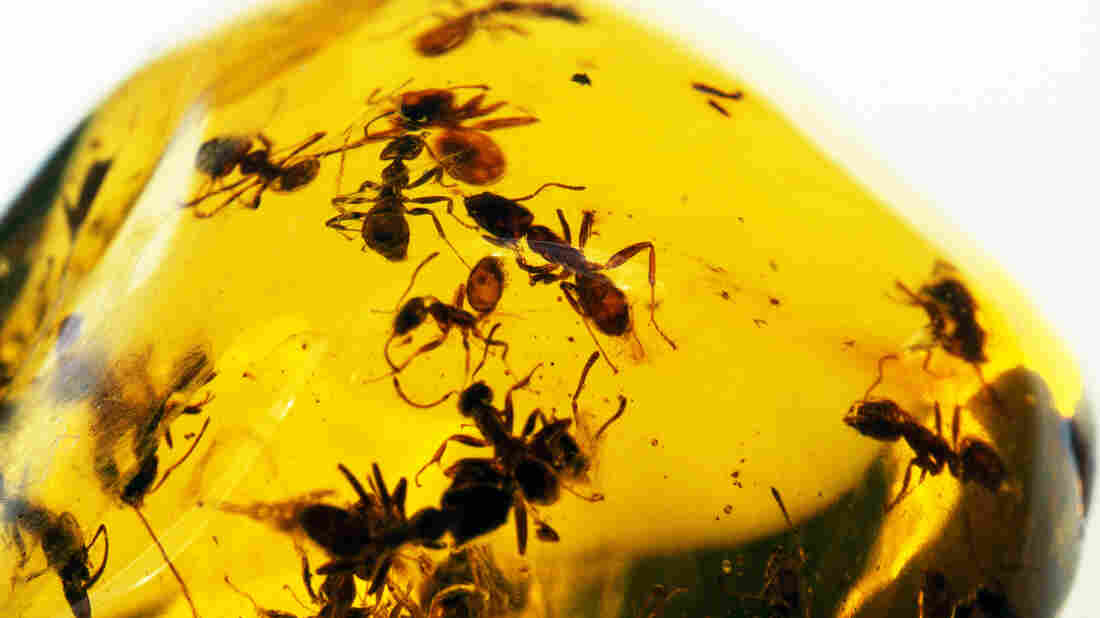 For years, he'd worked at Harvard's Museum of Comparative Zoology, which houses one of the greatest ant collections in the world. In his younger days, he'd done field work in the Dominican Republic, where he found a bunch of ants in amber. He brought his discoveries back to Cambridge and learned they were 25 million years old.

Twenty-five million years doesn't get us back to the age of the dinosaurs, (that's 100 million years ago) but still, it's a big jump, and when Wilson cracked open those glistening amber droplets, he found a bunch of ancient little lady ants, new to science, that he called Azteca alpha.

What if I could create a 25 million-year-old false alarm?

He studied them, and found they most closely resembled a modern species found in Peru, southern Brazil, and perhaps Central America, called Azteca muelleri. This modern ant, Wilson told Crichton, appears "to be a direct evolutionary descendent or otherwise close relative of Azteca alpha," which means these modern ants may have a lot of behaviors in common with their great, great, great etc. grandmas.

Well, (I imagine Wilson answering), what if I could create a 25 million-year-old false alarm?

These modern ants are well known for their alarm signals when their nests are invaded. As soon as an attack begins Azteca muelleri soldiers give off a shout (kind of like Paul Revere's "The British are coming! The British are coming!") — which they do in antspeak, that is, with specific chemical smells. Their warning, Ed said, relies on "large quantities of pheromones, acrid-smelling terpenoids, which they release into the air to alarm nestmates."

Wilson's naughty idea assumed that the ancient ants stored the same pheromone in their bodies way back then. And he told Michael Crichton it might be possible to break into some of those still preserved amber droplets, surgically invade the ancient ant inside and "extract remnants of the [alarm] pheromone from Azteca alpha remains ... "

Then he would take the extract to, say, southern Brazil, inject the smell into a modern nest and see if it set off the alarm, sending modern ants scurrying frantically to defend their nest ... the delicious part being, not only would it be amazing if the alarm still worked, but, as he told Crichton, "I could deliver a message from one ant colony to another across a span of 25 million years."

Crichton wanted Wilson to do it. But Wilson said he didn't have the time, not then, but he might try later. Years passed. Crichton died in 2008. Wilson still hasn't found the time.

In his new book he says this experiment has a bit "too much of the circus trick and too little of real science" to be worth taking the trouble, but this is the same guy who, in the 1950s, having discovered the ant gland that produces odor trails, dabbed his finger with invisible ant attractant and wrote his name — in longhand — on his lab desk and then gleefully watched as thousands of ants rushed across his desk to spell "Ed Wilson" with their bodies.

Ed Wilson knows how to get silly. "Daydream a lot," he advises young scientists in his book. "Make it a practice to indulge in fantasy." So it'll happen. One day, one of his army of former students will say, "Oh, Ed, I'm going to Brazil," and Ed will close his eyes, and start smiling ...

For my favorite example of E.O. Wilson being bad, check out the time he dabbed a live ant with an "I'm dead" smell. The ant had a very peculiar day. We talked about it on All Things Considered in 2009. Wilson's new book is called Letters to a Young Scientist. It's a very personal (and therefore rich with autobiographical sketches from his boy scouting days, research trips, on-campus intrigues) aimed at any young college student thinking about a career in science.