Accessibility links
Who Does A Better Wave? Sports Fans Or Hippos? : Krulwich Wonders... Hippos, it turns out, do a wave. Not a get-drunk, get-crazy, paint yourself wave, but a hippo-to-hippo serial roar that moves up and down river banks in Africa. We thought: Wouldn't it be fun to compare a stadium wave and a hippo wave, and see who does it fastest? Which was a great idea — until we heard about honey bees.

Who Does A Better Wave? Sports Fans Or Hippos?

Who Does A Better Wave? Sports Fans Or Hippos?

Professor William Barklow was on vacation when this happened. He was in Tanzania sitting on a river bank gazing about, when all of a sudden a hippopotamus pushed its head out of the river right in front of him, opened its huge mouth and bellowed. 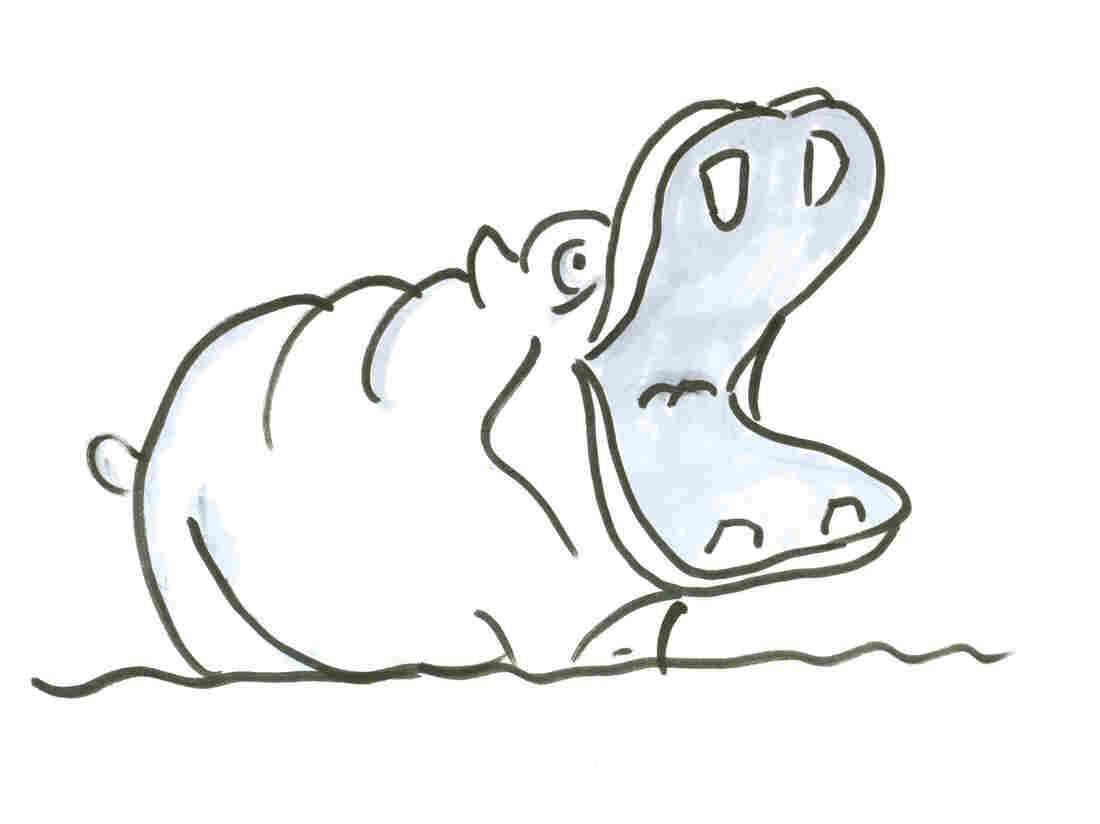 It was really loud. Barklow could feel sound waves hitting his chest, his neck; he could hear the cry echoing along the riverbank. He knew next to nothing about hippos being himself a bird man, a specialist on the North American loon, but he was intrigued by what happened next.

Every time the big hippo bellowed, other hippos in the neighborhood picked up the roar and bellowed too, passing the sound along the river in serial fashion, like one of those "waves" in sports stadium — this one moving from hippo to hippo.

He decided to map the phenomenon, and discovered that a hippo cry can move eight miles down a river in just four minutes. Doing the math, that's a "bellow wave" traveling at 120 miles per hour (though the roars peter out after eight miles, so it's more like a sprint).

Which raises a question: What if we compare a human sports stadium wave to a hippopotamus down-the-river wave? Who does it faster? Humans or hippos?

It turns out somebody's looked into this.

Professor Tamas Vicsek of the Eotvos Lorand University in Budapest and his team collected a bunch of sports videos where folks in the stadium did waves. According to Gavin, after Vicsek analyzed the footage, he created a simple computer model that was able to accurately reproduce the stadium waves.

Vicsek's group reported that while reaction times can vary (How drunk is the crowd? How pumped? How bored?), some human waves can circumnavigate a stadium at about 12 meters per second. That sounds fast, but it translates to 27 miles per hour.

So, sorry, Homo sapiens, 27 mph does not beat 120. Hippopotamus amphibius gets the crown.

Unless subtlety matters. Professor Vicsek admires Notre Dame football fans in Indiana. He told Gavin Pretor-Pinney, "They can set a wave moving in whichever direction they choose. They can even make them go both ways at the same time," he says. "For that you have to really know what you are doing."

Hippos, on the other hand, are no slouches. When a hippo bellows, Professor Barklow noticed, other hippos underwater seem to hear the sound and start surfacing, because it turns out hippos double-bellow. They can keep their nostrils above the surface, their lower jaw and throat under the water, and send two bellows simultaneously — an underwater one that does four times faster because sound travels more quickly through fresh water — and an airborne one.

Maybe. I don't pretend to understand what hippos are up to. But I am mindful that if you spend too much time wondering which animal is best at something, there's always another one that's better.

So, before I go, please check out this video of giant honeybees of southern Asia. They also do a wave. I don't know how fast it is, but it looks almost lightning fast. Imagine a hornet approaching this honeybee nest. The hornet wants to attack to feast on bee pupae and honey. But as it approaches, suddenly, this happens ...

This is called "shimmering." Gavin Pretor-Pinney says these bees are flicking "their bottoms" in waves. "Since the undersides of their abdomens are darker than their yellow backs, the appearance is of black swathes moving across the surface ... in a spiral pattern."

Hundreds of bees are serially mooning a hornet! It's an unlikely strategy, but it seems to work. Hornets see the spirals and think they're looking at some big looming thing, and they retreat.

I wonder if the hippos are jealous.

Gavin Pretor-Pinney's description of hippo-chorusing and hornet-mooning, can be found in his book The Wave Watcher's Companion.