This is the story of two continents doing battle, North America versus South America. It is also a biological mystery. 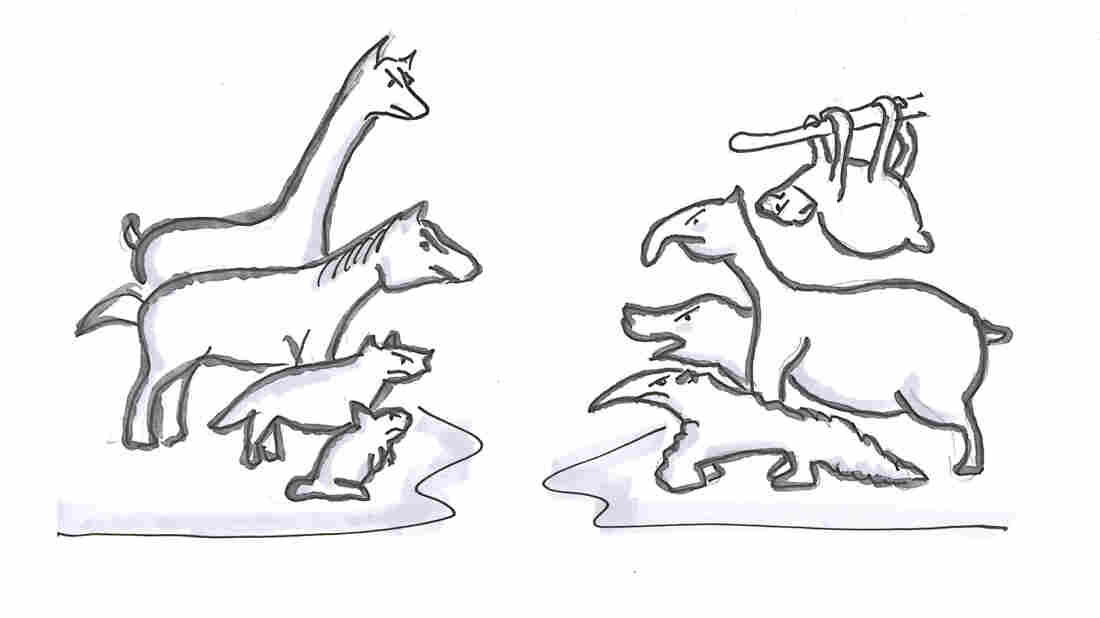 For a very long time, North America and South America were separate land masses. The Pacific Ocean slipped between them, flowing into the Caribbean. The Isthmus of Panama was there, but it was underwater. The two continents didn't touch.

As a result animals on both continents, especially mammals, evolved independently. They didn't, couldn't, interbreed. And yet, both North and South America had mountains, plains, long lazy rivers, deltas and supported similar forms of mammalian life. In fact, when biologists look back at the fossils, they found almost mirror like populations.

North America had horses. They were a little thicker and hairier back then. 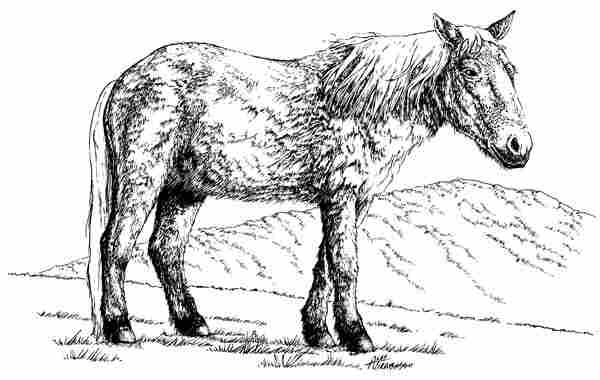 Enlarge this image
Alex Tirabasso/Courtesy of Canadian Museum of Nature 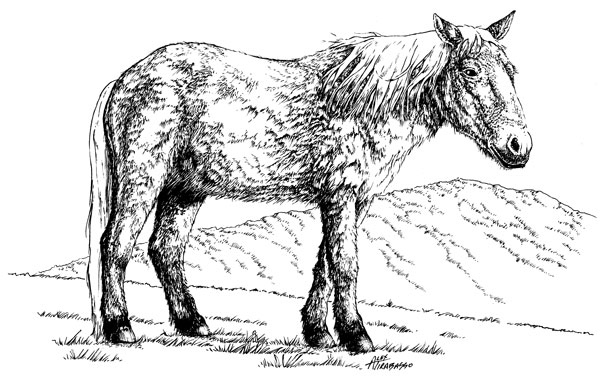 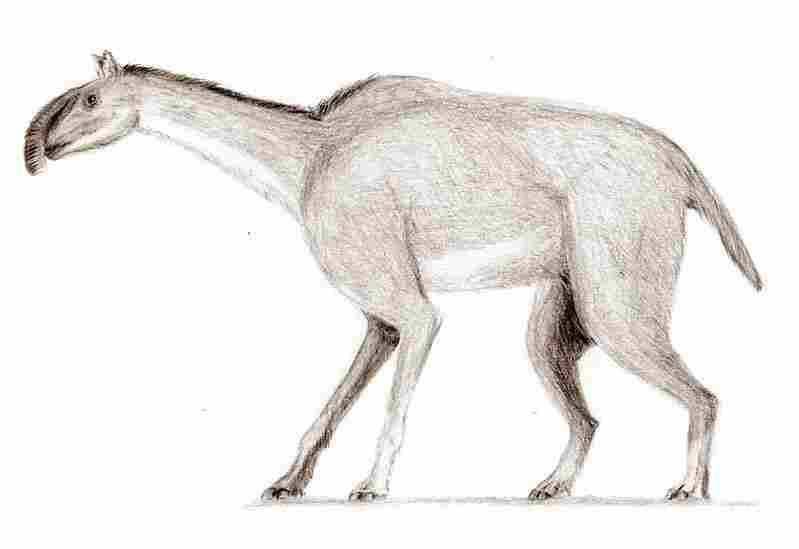 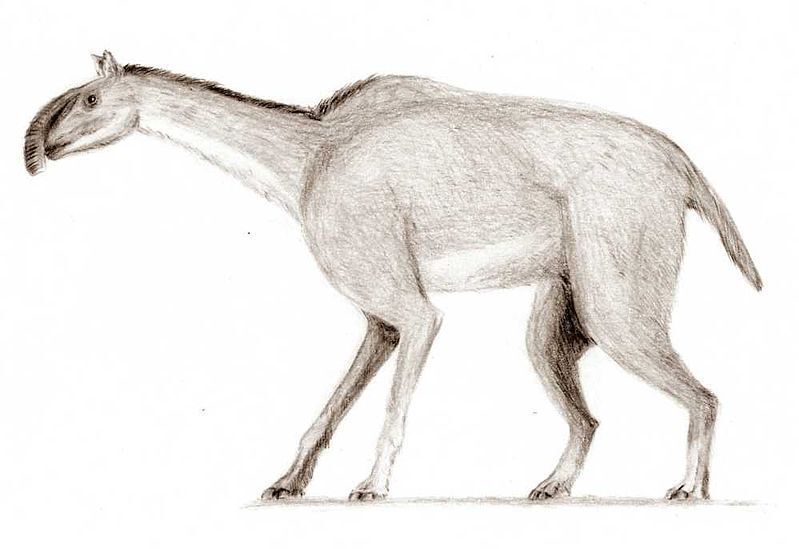 North America had elephants and rhinos (gone now, but they once were natives). 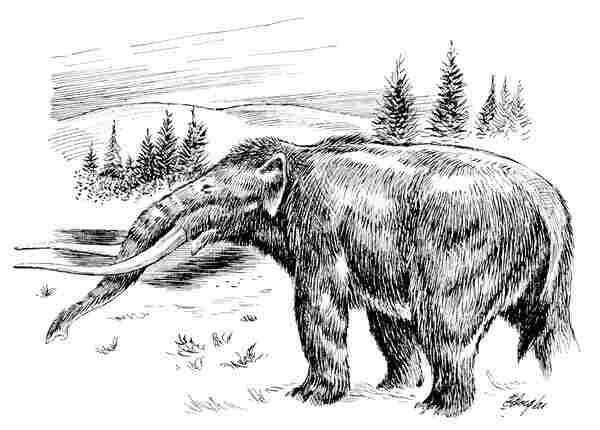 Enlarge this image
Charles Douglas/Courtesy of Canadian Museum of Nature 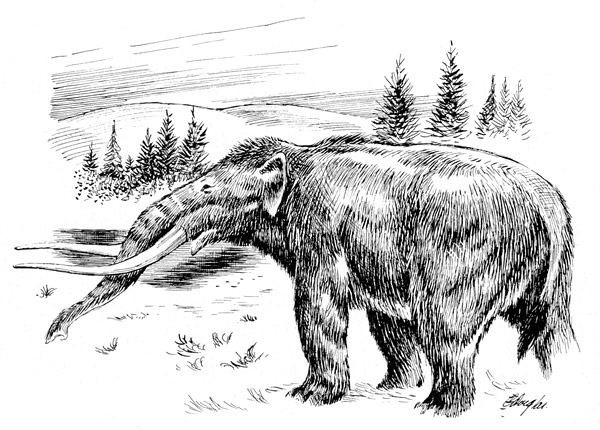 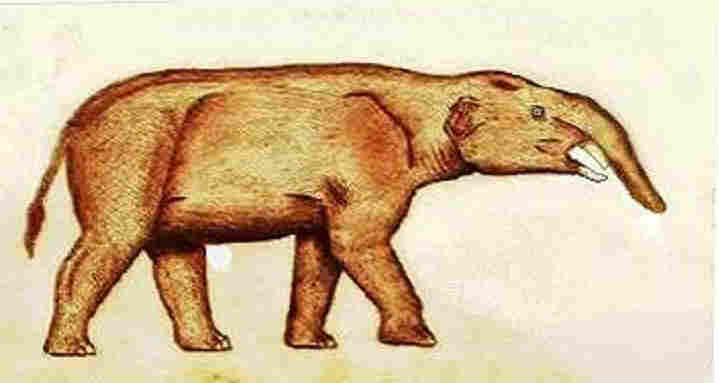 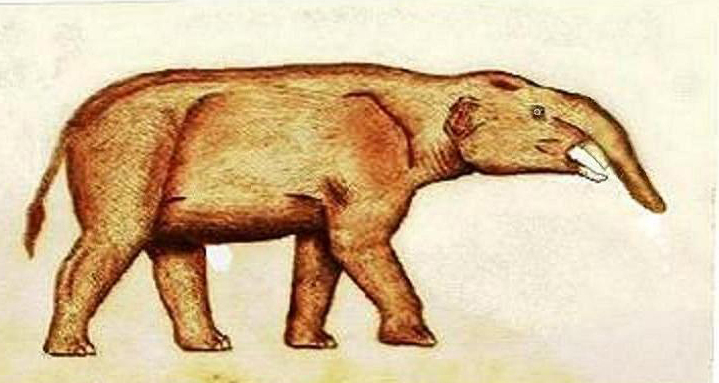 North America had a saber-toothed tiger.

So did South America. 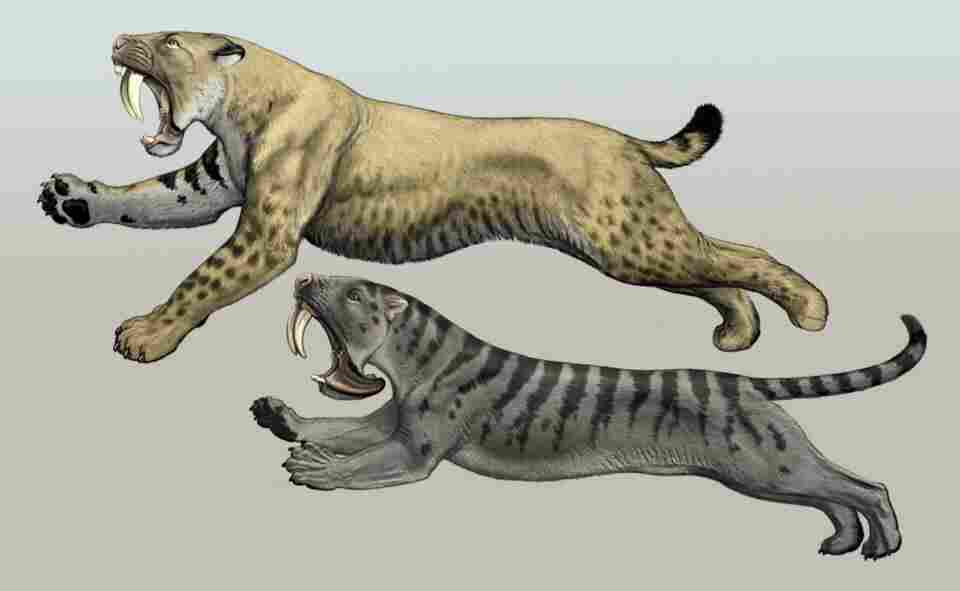 Again, while they looked the same, on close inspection you'd find the northern one carried its fetuses in a uterus, while the southern tiger was marsupial; its fetuses grew in an outside pouch.

"This evolutionary convergence was the greatest on land that the world has ever seen," writes biologist E.O. Wilson. The two continents had their own versions of shrews, weasels, cats and dogs. And then 2.5 million years ago, the two continents attached.

Long, long before any humans prowled the hemisphere, the Isthmus of Panama emerged, and all of a sudden it was possible for mammals in the north to meet (and compete) with mammals from the south.

So, as Ed Wilson puts it: "What happens when two full blown, closely similar dynasties meet head on?"

Well, it had to get rough. There was no accommodating everybody. Some of these animals lived in the same kinds of places and ate the same kinds of foods as their new competitors. The land couldn't support both, unless each side somehow managed to avoid the other.

Yet neither side had any obvious natural advantage. They'd survived and struggled to dominate their respective continents. Any gambler would have said, "I'm figuring half the time the northern mammals will prevail, half the time the southerners."

Which is why what actually happened is such a mystery.

According to Ed Wilson, "In general, where close ecological equivalents met during the interchange, the North American elements prevailed." In group after group, the southerners succumbed. Big cats with pouches lost out to big cats with none. South American toxodonts fell away, to be replaced by northern style tapirs and deer.

It wasn't a total rout. South American anteaters persist, so do tree sloths, monkeys. Armadillos have moved deep into Texas.

But overall, the northern mammals were better at invading and adapting. At this point nearly half the mammals in South America (if you count large groups, families and genera) come from lineages that came down from North America over the last 2.5 million years. The losers suffered a losers fate: they disappeared.

But why? What did the northern mammals have that the southern ones didn't?

"No one knows for sure," says Wilson. This is one of those puzzles that biologists keep coming back to, he says.

But they have a notion. The northern continents, America, Europe and Asia have spent eons attaching and detaching. Russia with Alaska, Canada with Greenland, Greenland with its eastern neighbors, Europe with Africa. Northern lands, therefore have regularly exchanged animals, and those animals have had to diversify, compete, adapt. They've had to deal with fierce winters and ice.

South America, on the other hand, since edging off from Africa, spent a long time as an island continent, untouched by other lands. And like Australia, it has produced highly unusual creatures, like kinkajous, guinea pigs, piranhas, weird frogs, toads, turtles, boa constrictors and tall, running birds like rheas — who can thrive because there aren't regular invaders to cope with.

What the northerners have that southerners lack, perhaps, is a tougher life. Northern animals have competed against more, different animals, accommodated more parasites, tested their immune systems in more ways; they've learned to expand more quickly, producing more babies when they need to — and it's that Northern worldliness, say some biologists, that gave them an edge.

But this is only a hypothesis. It's only begun to be tested. Thinking about it, I realized there is one southern mammal, a plains creature that stepped out of the southern forests that's been monstrously successful, spilling its offspring everywhere, north, south, east, west, even up...to the moon. We are that creature.

And while we weren't involved in the north/south encounter in the Americas, (we arrived later), technically, we are of African, that is southern, origin, so ... before biologists get too giddy about successful northern mammals, they might remember where they came from.

E.O. Wilson summarizes the North/South encounter in his book Letters to a Young Scientist. And special thanks to Carl Buell whose drawing of northern and southern big cats demonstrates, yet again, that he is king of paleo-illustration. I feel embarrassed to have my scribbles anywhere near his.

Read an excerpt of Letters To A Young Scientist