Accessibility links
The Subtle Mysteries Of Dinosaur Sex : Krulwich Wonders... This we know: that dinosaurs had babies. This we also know: that to have those babies, dinosaurs had sex. But here's what we don't know: with their size, their spikes, their scales, their genital equipment, how did they manage to do the deed? This doesn't prevent us from wondering.

The Subtle Mysteries Of Dinosaur Sex

The Subtle Mysteries Of Dinosaur Sex

They dominated our planet for 130 million years. You can't do that without having babies, and to have babies, dinosaurs had to have sex. The mystery is — and this is still very much a mystery — we don't really know how they did it. 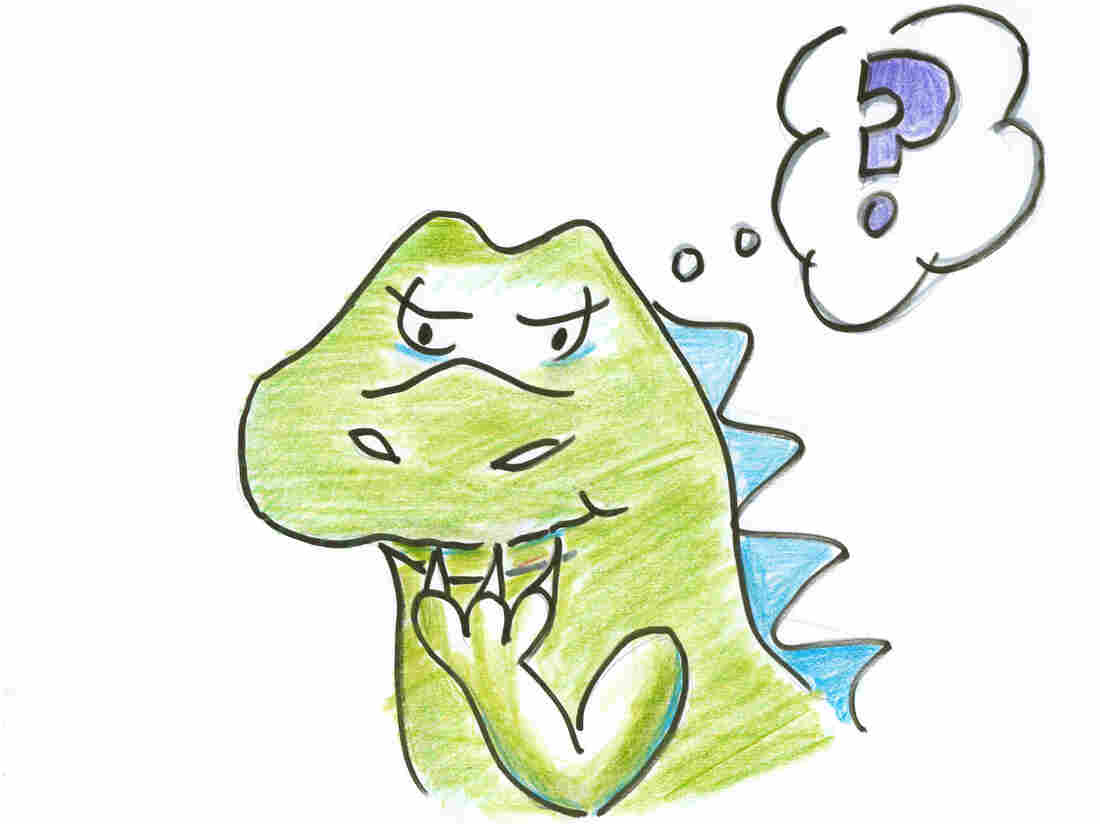 The key problems being:

First, dinosaur ladies and dinosaur gentlemen were roughly the same size. No big/little asymmetry as with spiders. With spiders, the little fellow mounts the big lady. There are no body-crushing weight issues.

Second, dinosaurs often had huge tails right above where the opening would be. What do you do with those tails? Where do you put them that's out of the way? They're huge.

And third, some dinosaurs are covered with spikes, plates and barbs. So it's the porcupine problem: How do you make contact without getting hurt?

In his book My Beloved Brontosaurus, Brian Switek considers all these questions, and I find the details fascinating ...

Let's Not Talk About It

... even though, for a long time scientists didn't want to talk about it in public.

When George Murray Levick, a naturalist on Captain Scott's famous 1910-1913 trek across Antarctica, saw dinosaur descendants (that is, Adele penguins) having sex, he was so skittish about it, he decided to send his notes directly to a few scientists rather than put it in a science journal. He'd seen a penguin trying to mate with a dead partner and that was so shocking to him, he wanted to protect ordinary folks (especially ladies) from knowing this. It wasn't until 2012 that his observations (which were real discoveries back then) were made public. So, says Brian, "whatever dinosaurs did on hot Jurassic nights was kept behind the shroud of prehistory." As in: "Shhhhhhhh."

The Fossil Record Is Blank

We have no fossil evidence of ancient reptile sex.

Well, that's not quite true. Someone in Germany found two 47-million-year-old turtles mating, one well inside the other. As they were doing this, a big hunk of mud fell on top of them and froze them in place. You can see them on a blog post I wrote a while ago here.

Other than that, "no dinosaur skeletons have ever been found articulated in the act," Brian says.

Imaginations, of course, run wild on this subject. Male dinosaurs, in particular, "must have been as grotesquely fantastic and terrifying as the rest of their anatomy, right?" says Brian. 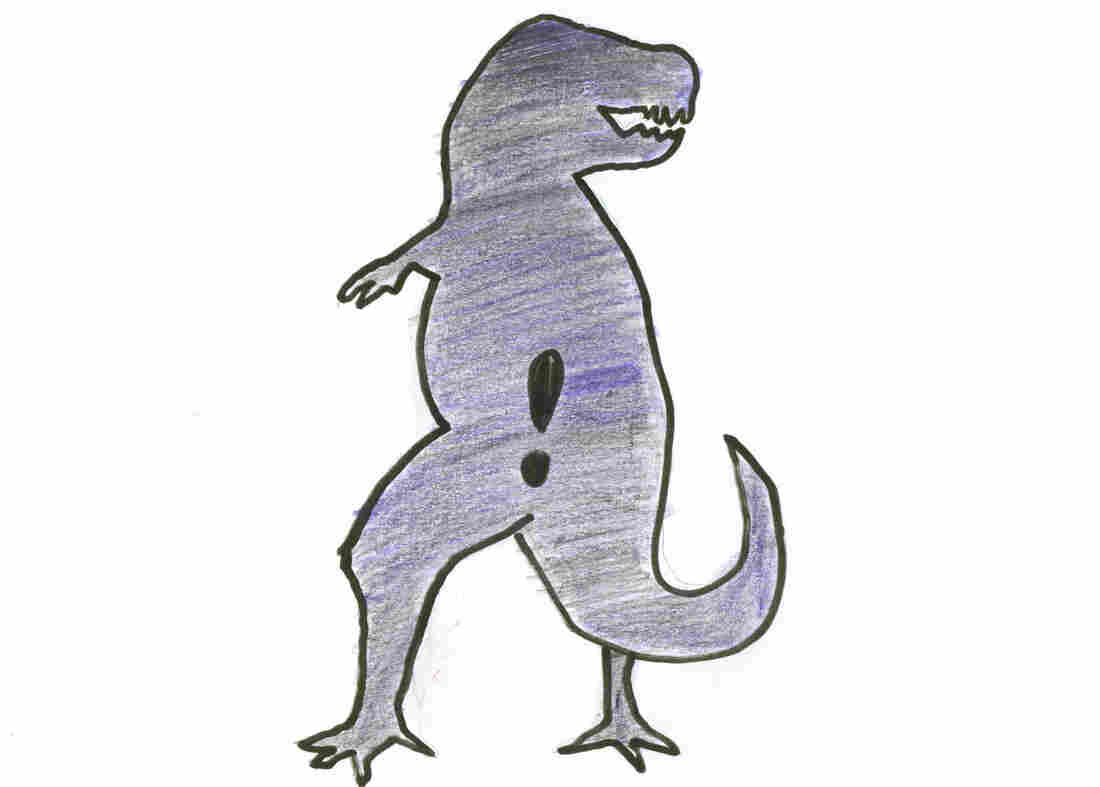 Can Bird And Crocodile Sex Give Us A Clue?

Birds and crocodiles don't look the same, but they both descend from the dinosaur line. Birds have been called "living dinosaurs." Crocodiles also are modern cousins of dinosaurs. We can watch both these modern animals have sex. If they do it the same way, with the same anatomical parts, mimicking each other's behavior, logic says maybe they got their equipment from their common great, great, great grandparents. So scientists asked, what do crocs and birds have in common? 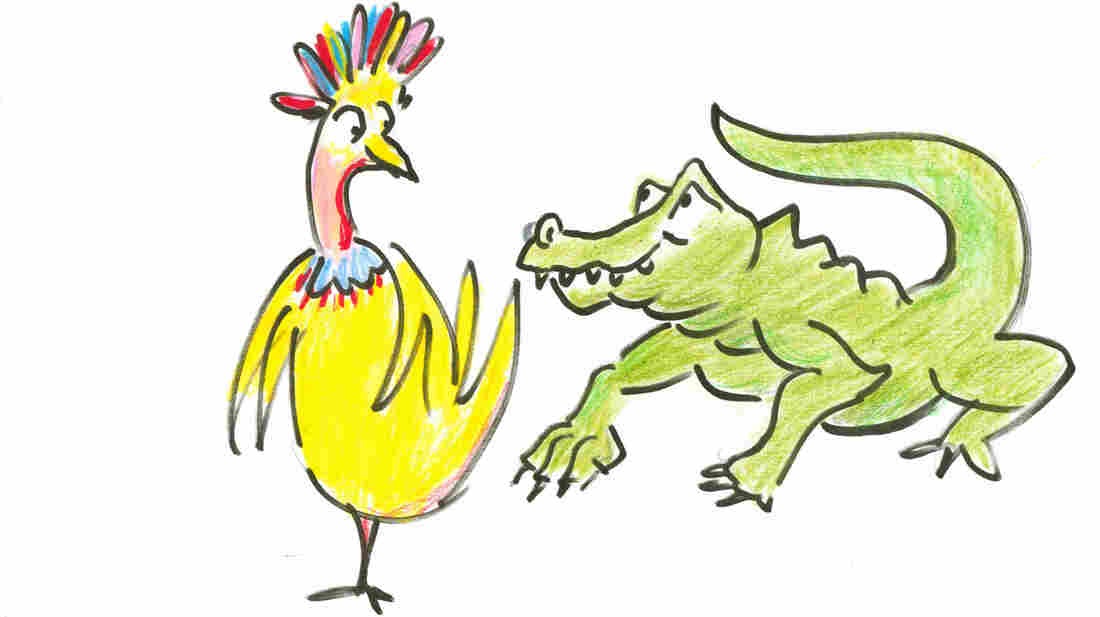 They both have cloacas. That's a cavity between their legs that allows poop to go through, but also contains, hidden inside, their sex organs. So it's a multi-purpose bottom pocket. Since crocs and birds both have cloacas, that suggests dinosaurs had them too.

Which means, says Brian, that most of the time male dinosaurs had their stuff tucked inside. "You wouldn't be able to see anything hanging low, or wobbling to and fro, as a male Apatosaurus plodded by." The big guy's big guy would be inside the cloaca, which would have looked, from the outside like a slit beneath the dinosaur's tail. The female's sex parts would be inside her slit. So when not turned on, there'd be nothing a dinosaur observer to see.

What About The Sex Act?

This takes us back to our three problems listed above. How do you manage the weight issues, the spikey issues, the tail problem?

Checking back with the birds and crocodiles, most male birds don't have a penis at all. They do what's called a "cloacal kiss," meaning, I think, there's a gentle touching of slits, no penetration, then a squirt.

Crocodiles, (and ducks) on the other hand, do have penises — sometimes very long ones — and they do penetrate their partners. Brian says the oldest lineages of birds are penis-bearing. Modern birds, it is thought, have gradually sloughed off penises, going for the "kiss" — leading scientists to guess that when a male dinosaur had sex, a penis would emerge from the cloaca and extend across a space.

So how big a space would that be? 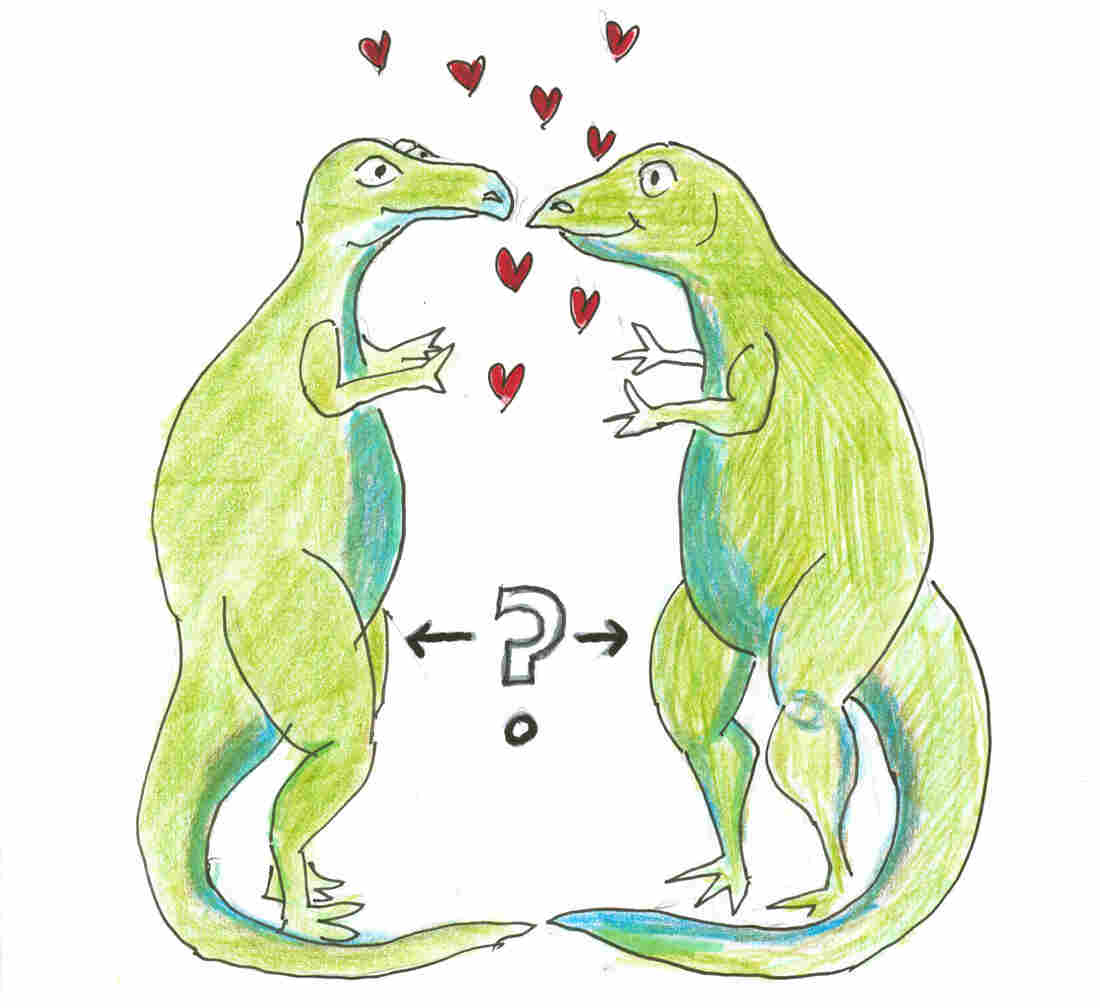 Nobody knows. (I'm thinking of footage I've seen of whale penises, and they are really, really big.) But Brian, ignoring the fantasies of his 14-year-old readers, says the super long appendage is not likely. He — and many dinosaur scholars — have chosen to favor up close and personal sex involving a (relatively) small penis.

How Did Dinosaurs Cuddle?

Thinking about a huge, long-necked sauropod (what we used to call a Brontosaurus), the image that comes to mind is a doggie-style approach, male in the rear, upright, female crouched forward.

But if you know your dinosaur physics, you immediately ask, how did these guys go upright on such skinny back legs? The weight of that monstrous head, neck and midsection is enormous. Wouldn't, Brian asks, those back limbs snap "like toothpicks"? 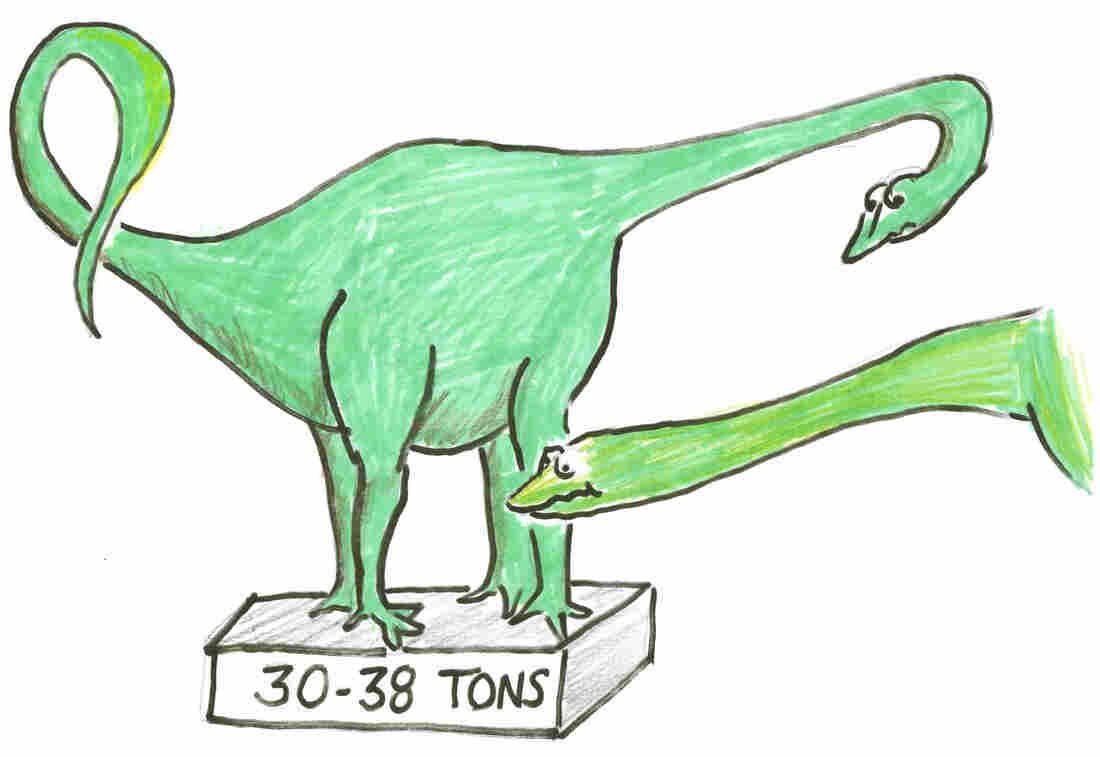 "And how," Brian goes on, "did the dinosaur's heart mange to pump enough blood up to the sauropod's [upright] head?"

Biomechanics expert R. McNeil Alexander argues that female dinosaurs, like female elephants, can manage the weight of a male on top, since the male is not crushing all of her, just her rear, and is doing it, often, with just one leg on top, not both. It's not comfortable, but it is possible, he thinks.

The big problem is "those big, relatively stiff tails". Where do you put them? Palentologist Beverly Halstead has proposed a giraffe-like scenario, where sauropods somehow entwined their tails, the way giraffes sometimes embrace with their necks, but I'm having trouble envisioning that.

What About Those Spikes?

This, you should excuse the expression, is the thorniest problem of all. Stegosaurs, for example, were covered with hard plates "that transitioned rearward into paired sets of huge spikes." 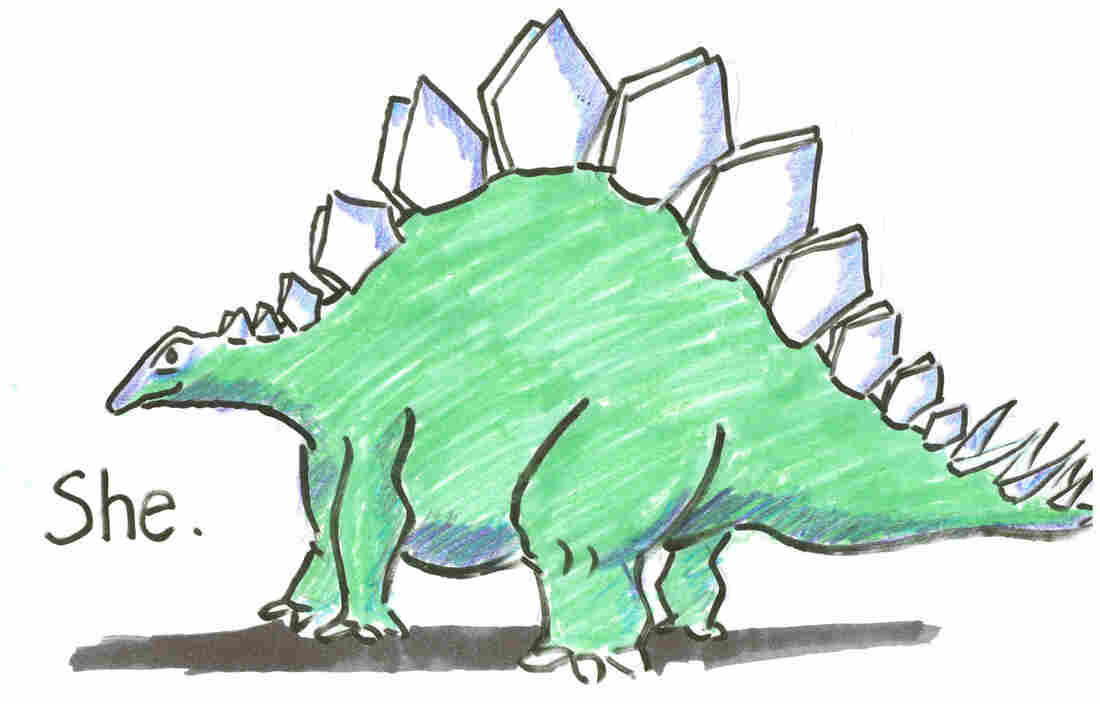 Brian asked paleontologist Heinrich Mallison to imagine two Kentrosaurs (a kind of Stegosaur) doing a rear mount, one leg over the female — as described above — and after modeling the act on a computer, Mallison said, nah, it can't happen. Any male trying that would "castrate himself on her sharp spikes. One hip spike, in particular; it seemed to be positioned just right to strike fear into the hearts of stegosaur suitors." 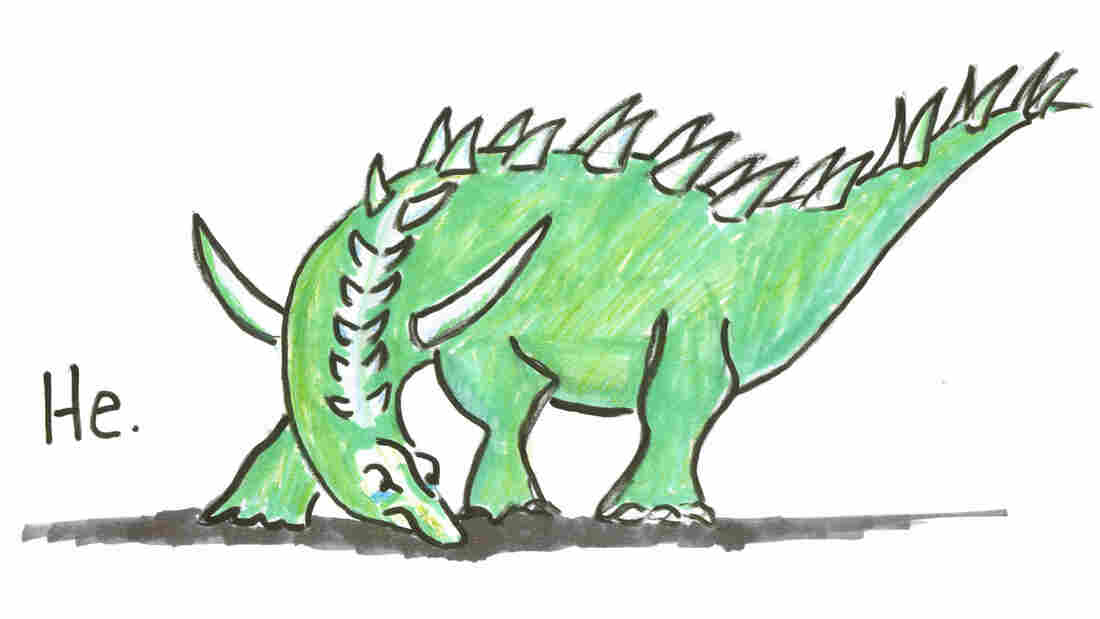 So the "ouch" problem hasn't been solved. I mean, the dinosaurs solved it — obviously. But we, with our big subtle brains and our computers and our wonderful imaginations, we are stumped. By reptiles with famously small brains.