Accessibility links
How To Disappear When Someone's Spying On You : Krulwich Wonders... A New York design team has just produced an invisibility cloak for your cellphone. Pop it in and no government, no merchants, no friends, no one knows where your phone is. Another design team in Canada says it could do stuff like this — but it won't. Who's right?

How To Disappear When Someone's Spying On You

How To Disappear When Someone's Spying On You

Whenever your cellphone is on, "They" know where you are, and I mean all the Theys — the spooks, the merchants, the drone pilots, the private detectives, probably even the Chinese. If you want your privacy, says artist/designer Adam Harvey, you can go to the back of your phone, pry out the battery and break the connection, but that takes time (and long fingernails). Why should it be so hard to disappear when you want to? It shouldn't, he says. So he's been designing privacy accessories — spaces to hide in.

With his pal, the fabricator Johanna Bloomfield, this summer Adam went on Kickstarter to raise money for the newest design, the "OFF Pocket." It's a privacy product, a little cloak of invisibility ... 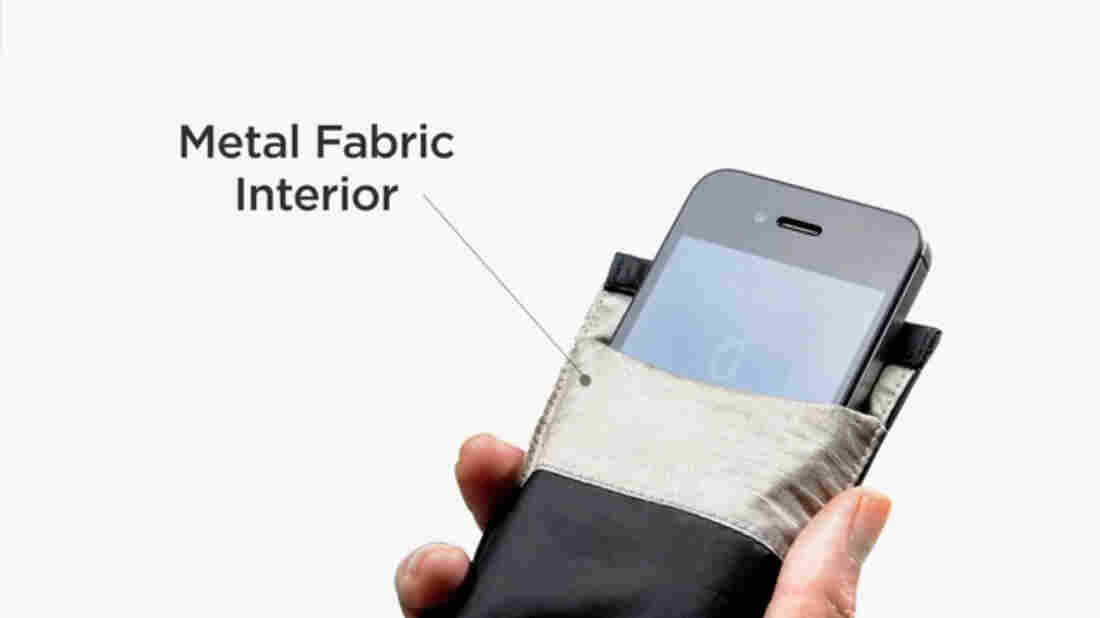 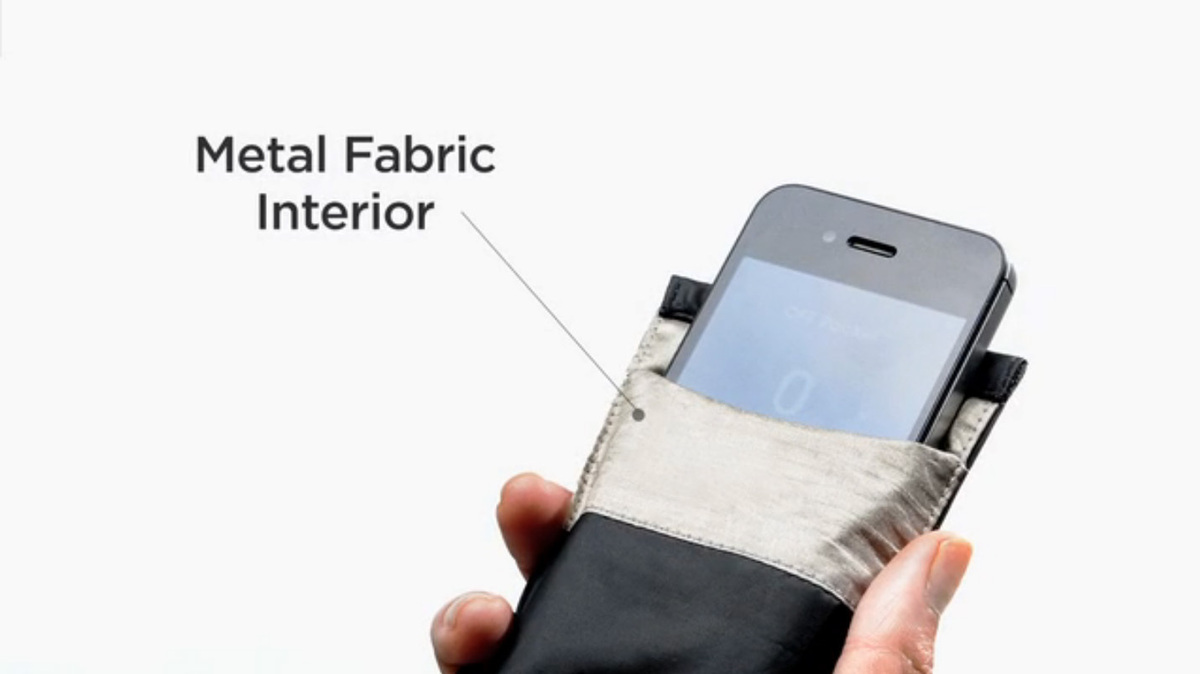 ... in this case, a purse made of "specialized metal fabric" that he says will block all incoming phone signals, Wi-Fi, GPS and Internet connections. Just slip your phone in this little bag, adjust the straps, and advertisers, your government, or, if you're Pakistani, that drone in the sky can't track you to your hip pocket. This was their video pitch ...

This appeal worked. More than worked. Adam and Johanna were looking for $35,000, and Tuesday, when the money-raising period ended, they had $56,447 from 668 people — which I don't think they could have done a year ago.

A year ago, we hadn't seen Edward Snowden's NSA leaks, showing how our government collects this stuff wholesale from all of us, no warrants necessary. We didn't know the FBI may be asking phone companies to track our calls, or that camera-bearing drones are becoming more and more popular, not just with law enforcement agencies, but with private businesses and teenagers who use them to peer through each other's windows, or that people now walk around with "Google Glass" glasses that shoot photos and videos of friends without much evidence that there's a camera on. At some point, all these devices, multiplying and multiplying, make us wonder, even if we'd never wondered this before, "Who's watching me?"

And once we start wondering, it's only natural to think about protecting ourselves — and that's the change, I suspect, that has just begun. How else to explain Adam and Johanna's success this month on Kickstarter?

After all, I don't think any independent appraiser has measured the effectiveness of the OFF Pocket. In their video, Adam says the signal-proof purse works better than hiding your phone in a refrigerator (which is where Edward Snowden asked visitors to put their phones when they visited), or than dropping your phone into a cocktail shaker (something James Bond might have done).

That's nice, but a sensible customer might want to know more, like has Consumer Reports taken one of these things to a test lab and zapped it? Or shouldn't we worry that if we put a live phone in an out-of-the-way place, it will frantically try to find a tower to connect to, exhausting its battery? What if using an OFF Pocket drastically shortens the utility of your phone?

What's in the "specialized metal fabric" that's worth $85 a pop? If you wrapped your phone in tinfoil (3 cents a pop) would this work just as well?

Normally, I'd be a suspicious buyer, but the times are not normal. Adam and Johanna's first edition of the OFF Pocket sold out. The second edition, I'm guessing, will go fast. People now want these things.

That wasn't the case when Adam launched his campaign to help people "dress appropriately for a society of mass surveillance." Last winter, Adam and Johanna teamed up to create a line of "Stealth Wear": hoodies, cloaks, hijabs and burqas, all made of an "anti-drone" fabric, coated to keep the wearer from being seen by a spybot circling above. 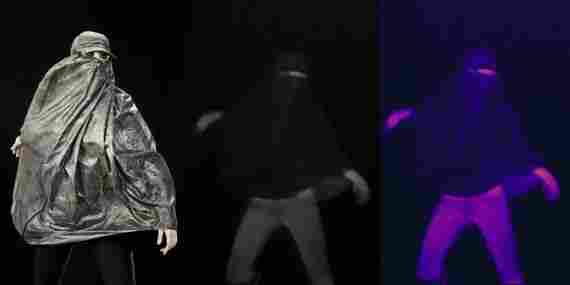 He sold a single scarf. Though the price, $565, may explain that. (The burqa was listed at almost $2,300.) To be fair, Adam wasn't trying to start a business. He's an artist and his job, at least some of the time, is to provoke.

In that mood, he offered camouflage tips for people who don't like facial-recognition cameras. This involved breaking the facial silhouette with dagger-like coifs of highly moussed hair, like this: 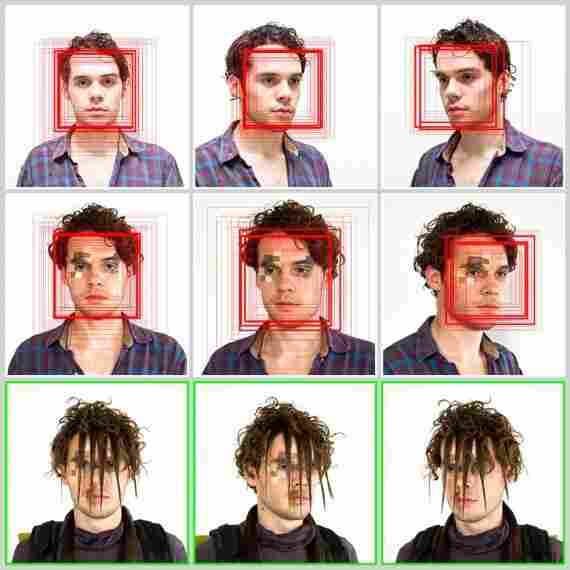 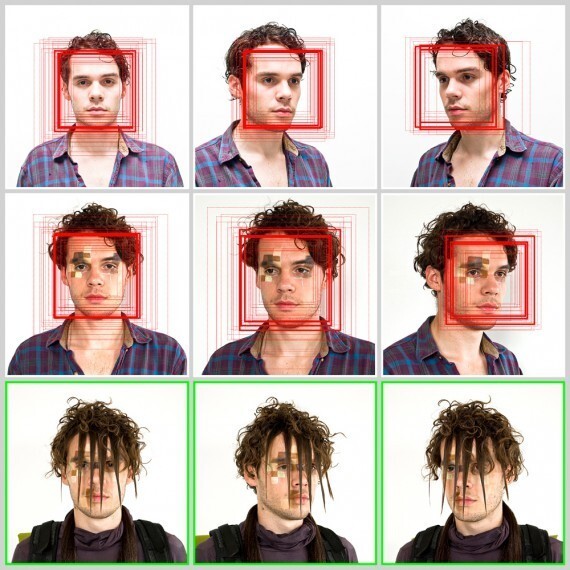 My favorite is Adam's neat little handbag, loaded with LEDs. It's intended for paparazzid-out movie stars looking for revenge. When a pack of photographers closes in, you press a small button on your evening bag and zap them (and their cameras) with a blast of white light. Ka-POW! As you don't see here: 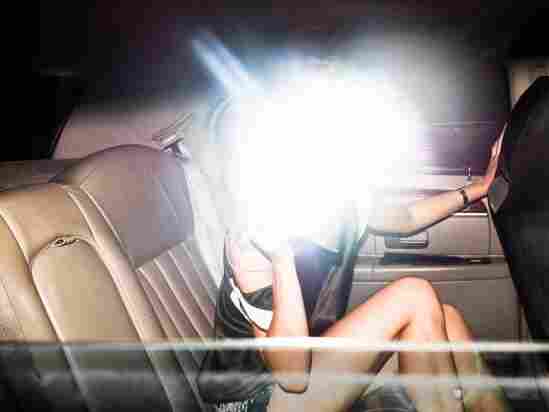 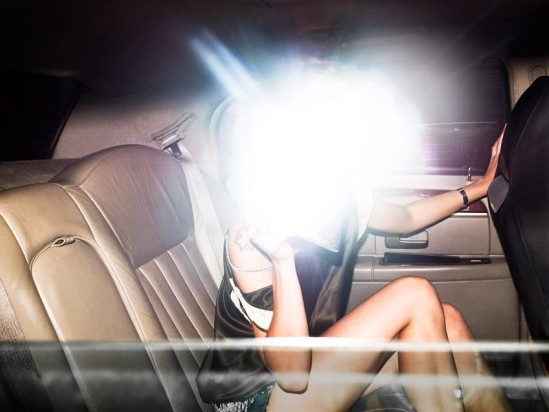 None of these found a big market, or any market, really, but the OFF Pocket might. For the first time Adam and Johanna may be entertaining serious thoughts about going commercial.

What About The Bad Guys?

But here's a little problem. There are already real businesses run by serious businessmen who say they know how to protect us from government surveillance, but so far, they don't want to. They fear they might end up helping the Bad Guys.

Guy Cramer runs a Canadian company with a wonderfully ridiculous name, HyperStealth Biotechnology, plus an even better logo, "Shh. We Were Never Here." But his company is big and very successful. It makes camouflage clothing for hunters (I've blogged about their amazing "Optifade" bet-you-can't-see-me outfits) and for many of the world's armies. Last year he caused a stir when he claimed to have built an "invisibility cloak" using light-bending optical camouflage that, he said, makes soldiers in the field vanish. London's The Guardian newspaper says only "top brass [officers] have been permitted to see the cloak in action," the reason being, Guy Cramer doesn't want terrorists to figure out how it works.

Cramer, unlike Adam Harvey, worries more about terrorism than about privacy. His company has created products that could hide civilians from civil or military authorities, but he won't market them. HyperStealth has a product called "Smartcamo" that makes people or things very hard to see. There have been demonstrations elsewhere of how a version of this might work ...

but as Cramer told the Guardian, he deliberately leaves an essential ingredient out when he sells to civilians.

"When we sell to the commercial market, we use special inks that actually don't work under infrared conditions. It looks identical but you show up on the infrared as a big white target." So infrared detectors will see you. Cramer says he's not alone. His competitors, with similar products, won't sell them to you and me, because some of those you's and me's are likely to be our enemies. "It would cost me pennies more to add the infrared but I wouldn't want to give the bad guys that advantage," he says.

This is getting interesting. On the one hand, I have no doubt there are going to be more and more people who will pay for a garment that ensures their privacy, but I don't know which way to go on this — in Adam's direction, where ordinary citizens get technologies that protect them from government surveillance, or in Guy's direction, where small rogue teams of terrorists might appropriate these same technologies to do us harm. Which is the priority — our safety or our privacy?

Where do we draw the line?