Accessibility links
Drone It To Me, Baby : Krulwich Wonders... Drones are for spying, right? Right. But if Jasper van Loenen's idea works, drones will also become private moving vans. Crows won't like this. Trees won't like this. I'm not sure I like this. But you've got to see Jasper's instant-drone deliver a bicycle wheel across campus ...

Spies used them first, then the Air Force, then cops, then mischievous civilians; drones, for some reason, are what gawkers use to gawk. They're spy accessories. But not only spy accessories. Thanks to Jasper van Loenen, drones are about to expand their repertoire. The word "drone" is about to become a verb, as in "Drone it to me"... 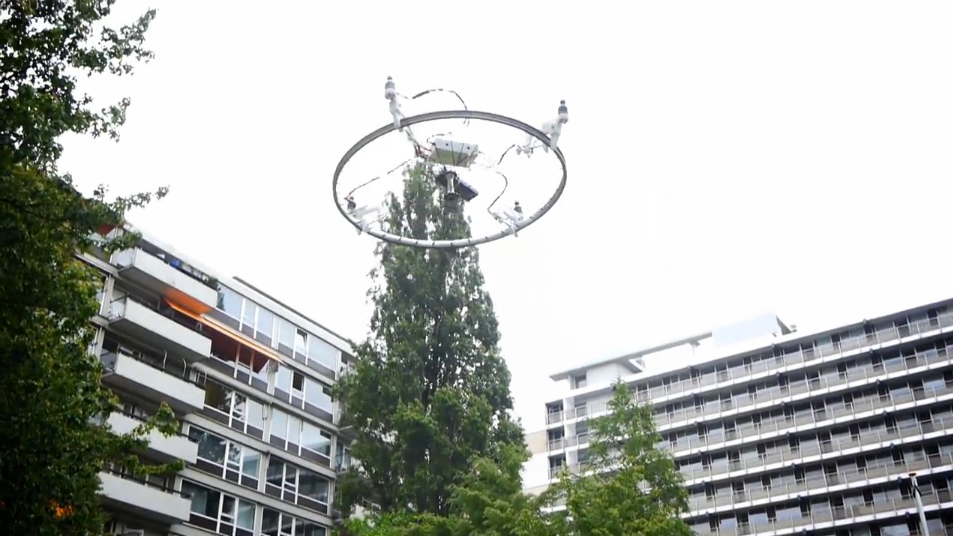 For his graduation thesis at Piet Zwart Institute in Rotterdam, Netherlands, Jasper, a young artist/designer, came up with a handy-dandy, easy-to-use assembly kit that lets you send small objects through the air to a nearby recipient — a sort of UPS of the sky.

I don't want to ruin this before you see it, but if you know somebody across campus who needs a telephone, a keyboard, a spare bicycle wheel, a surfboard, and you don't want to get out of bed and walk it over, with Jasper's kit all you have to do is open your window and do this ...

"I like programming," Jasper writes on his home page. "I'm interested in taking stuff away from the computer screen and finding ways to look at and interact with information." Since it is already possible, he says, to download an open-source gun, generate your own currency — why not a do-it-yourself drone? Why not, he writes, "claim your piece of sky"?

Well, I know one reason why. Because videos are not like real life. If I tried something like this, a propeller would fall off, the plugs wouldn't work, the cargo would slip, dangle and crash to earth — something, different things, but always something would go wrong. Jasper knows this, too. Snooping around on his Vimeo site, I found a video of one of his earlier attempts to get a drone into the air. (That's what it looks like, anyway.) It's labeled "Quad in the Snow," because that's where he ends up, upside down ... in the snow:

But over the months, he apparently got better, and so, I suppose, might I. The real question here is how much room is there in our sky for all the ideas now being contemplated? Spybots, toybots, little moving vans, not to mention whatever Jasper and his pals think up next. Crows, sparrows and tree-perching birds (not to mention trees) can't go to court, but if they could, they'd be asking some judge: "Come on! You guys can't hog all the space. A little respect, please! We all need to share."