Accessibility links
When The Dutch Keep Secrets, Everybody Notices. A Google Puzzle : Krulwich Wonders... Suppose you wanted to slip into a space quietly, secretly. Would you wear a dazzling, many-colored ball gown? I think not. So how do we explain what the Dutch government is doing on Google Maps? Is this any way to keep a secret?

When The Dutch Keep Secrets, Everybody Notices. A Google Puzzle

When The Dutch Keep Secrets, Everybody Notices. A Google Puzzle 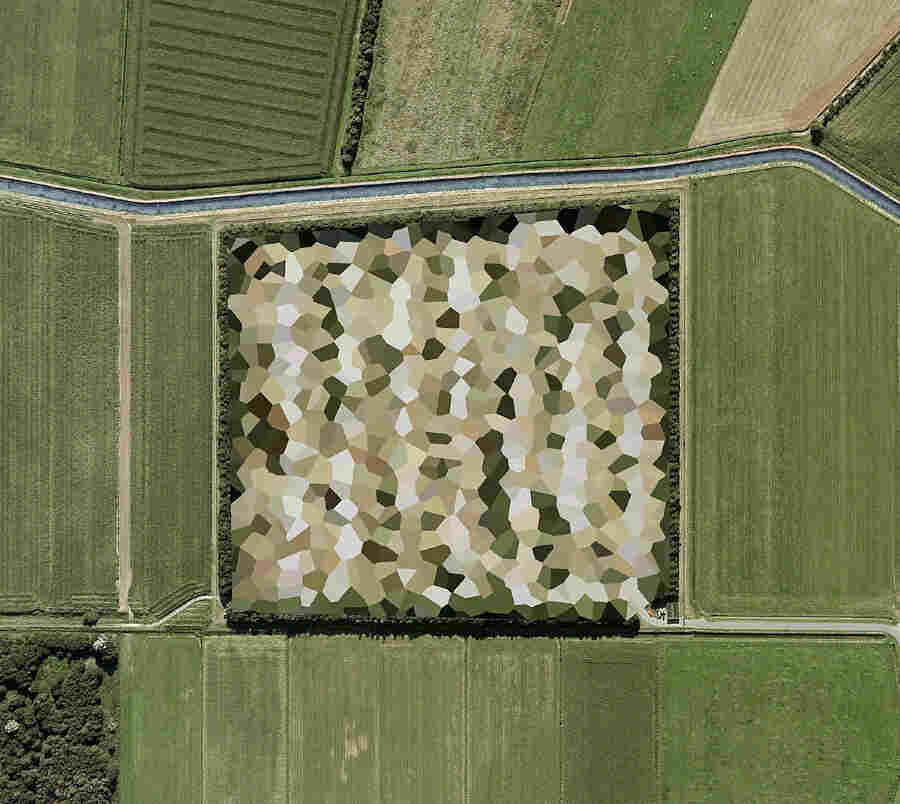 When I saw it for the first time, here's what I knew: It's a Google image found on Google Maps, taken by a satellite, plucked and blogged by photographer/sleuth, Mishka Henner. It's a patch of land near a town called Coevorden, in The Netherlands. There's a road on one side, plowed farmland all about, some trees on the lower left and then, weirdly, grey, black, white, golden, green and brown patches crunched together in an almost-rectangle. Those couldn't be natural, I thought.

They aren't. The Dutch government superimposed them on Google Maps to disguise what's underneath. They've changed it since, but what's underneath is a storage facility that serves NATO. This is how, Mishka says, The Netherlands like to keep secrets.

Google allows countries to block out neighborhoods or buildings for security purposes. North Korea has chosen to block its entire self. But the Dutch are, in their way, almost as peculiar. In a normal country, like France, if they don't want you to see Reims Air Base, they just plop big pixels on it, like this ... 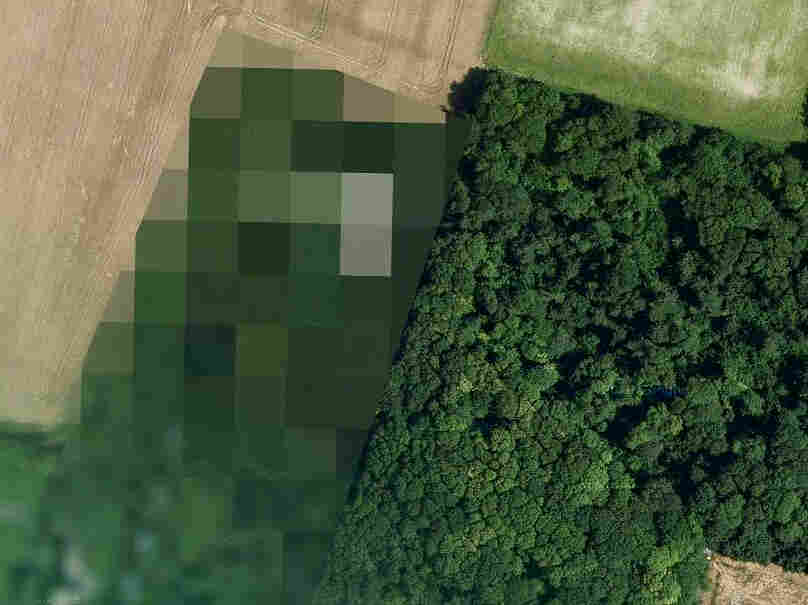 But here's what the Dutch did with their base, Volkel Air Base near Uden. To hide this place from prying eyes, they chose those same eye-catching, artful polygons, which had the completely wrong effect; these polygons made me want to look more. Why, I wonder, would they do this? Especially when truTV reports they really had something to protect: "WikiLeaks did publish a diplomatic cable that confirmed the presence of nuclear warheads at this base." 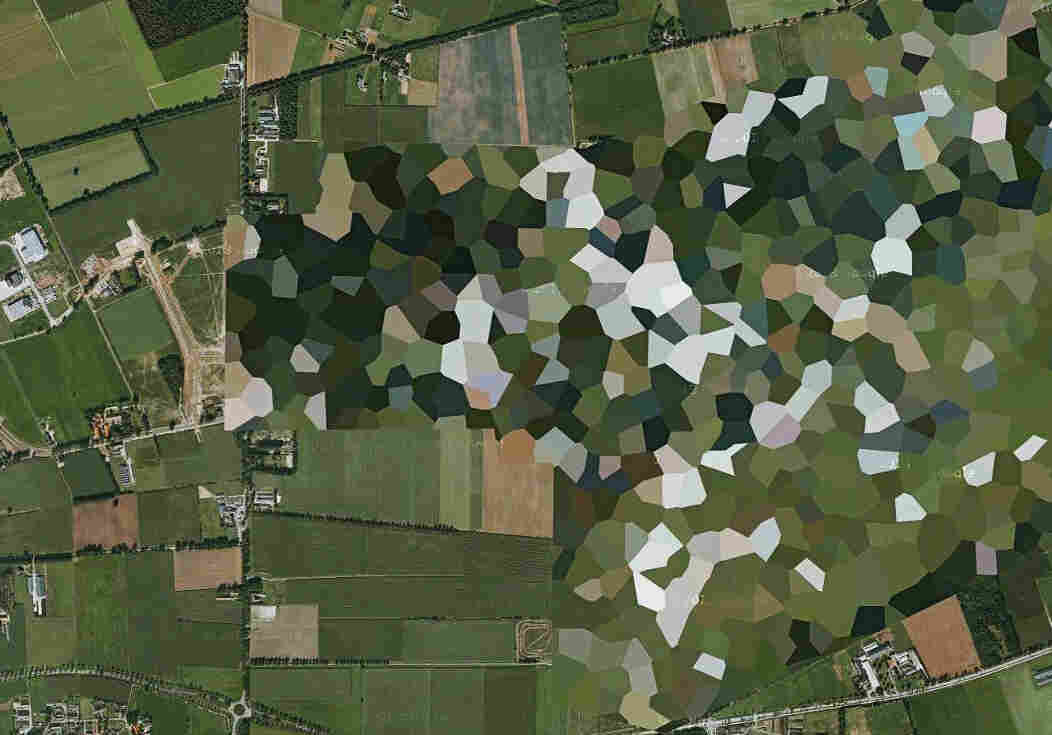 So this is a puzzle. The way to avoid attention is, well, to avoid attention. There are so many ways to be bland. In Hungary, the government for a while wanted to hide its Szazhalombatta Oil Refinery — which it did (they seem to have changed this now) by creating a dull green parking lot, with markings here and there. It's crude, but boring ... 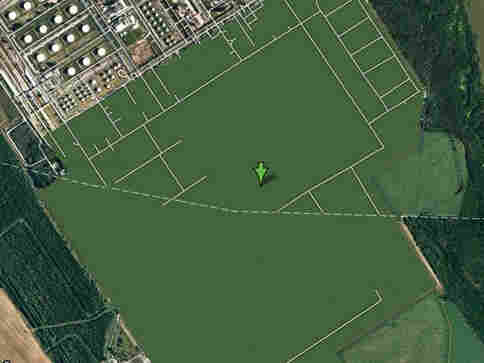 ... but when the Dutch decided to hide a Space Research and Technology Center they slapped this razzle-dazzle soccer ball over the complex to keep people from noticing — which makes it so noticeable. To add to the puzzle, truTV on its blog says this complex "has a visitor's center open to the public, so it's not like we aren't supposed to know it's there." 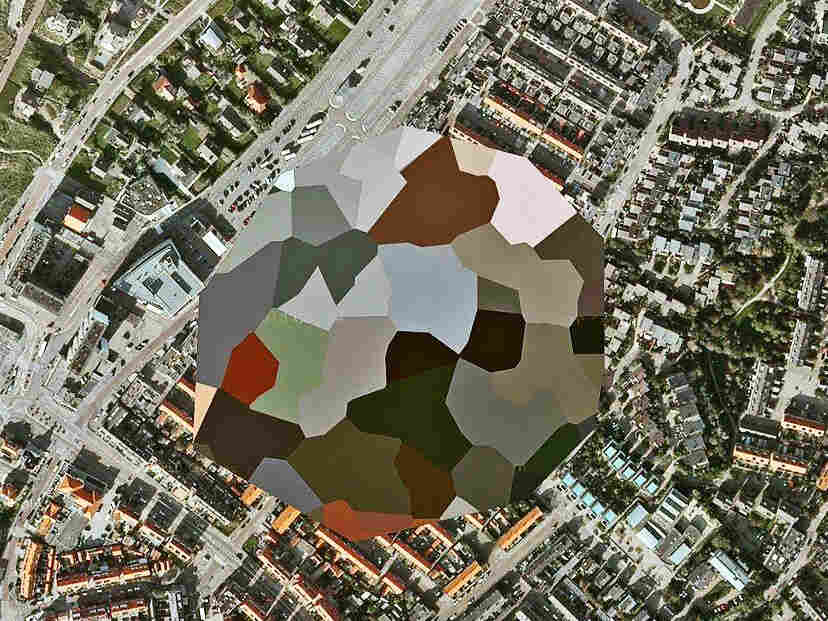 So what is going on? Are the Dutch (home to Rembrandt, Vermeer and Van Gogh) so in love with beauty that they can't help themselves? They want their secrets to look dashing? Beautiful?

Mishka Henner isn't sure. Writing in Granta Magazine last year, he admits there is "an absurdity to these censored images since their overt, bold and graphic nature only draws attention to the very sites that are meant to be hidden." Yup. That's clear. But the question remains ... why?

Anybody have a notion? If you live in The Netherlands, maybe you can explain what your government is thinking ...