The Good Fishermen, Story No. 1

The first is set in a town in Pakistan that sits next to the Arabian Sea. Machar is a city with 500,000 people mostly young, crowded into a squatter's settlement, "almost like cans of sardines," says one resident. The adults work as fishermen, shrimp peelers, fish cleaners or guys who break big tankers into scrap.

There's a little village not too far from Machar called Kakapir. Standing on the beach there, you can see mangrove trees out in the shallow ocean, growing on the mudflats, where there are spits of sandy land covered by trees. Those trees help defend the shore from incoming typhoons, so they are protected by the government.

The local harbor is filthy. So filthy, in recent years, crabs, prawn and shrimp have been getting harder to find, so when a group of local fishermen complained a few years ago, after being ignored by their city government, they asked more distant organizations for help.

The U.N. and the World Wildlife Fund jumped in. They sent money to two local groups. One team of fishermen, says writer Alan Weisman in his book Countdown used its money to plant mangroves, clean the water and start an ecotourism project. They bought two lagoon cruise boats, advertised in nearby Karachi for city folks to come and marvel "at this placid oasis, filled with flamingos and frogs" out at the edge of their harbor. Soon, says Weisman, they were "attracting 250 people" on weekends to see wonders "that most never knew [were] at the edge of their churning city."

The other group behaved very differently. Also local and nominally made up of fisherman, it had become a front for gangsters, the "timber mafia." Instead of protecting mangrove trees, this group paid squatters to cut them down, paid police to look the other way, began moving building materials onto forest land, sold the wood, and "divided the protected land into lots to sell to Saudi and Dubai sheiks for beach and harbor view vacation homes." Local officials stayed quiet.

The first group complained, and complained loudly. Not long after, they got their comeuppance.

On a January night in 2011, their Fisher Forum community center was invaded, computers smashed, life jackets for tourists shredded and, says Weisman, "the office was riddled with bullets."

So they moved. The police were informed, but did nothing.

On May 5, 2011, their new office was hit again, this time by a grenade that blew off its roof "bending the steep I-beams into parabolas." Both tourist boats were burned. A U.N.-funded jetty was destroyed. Armed men appeared at the house of the ecotourism project's founder, Abdul Ghani, fired guns into the air, causing Ghani and his colleague Haji Abu Bakar to flee with other fishermen into the mangroves.

At three the next morning, most of the fishermen filtered back to town, but not Ghani, not Abu Baker. Their bodies were found floating in a lagoon, "Bakar's hands were tied behind his back, and his neck was broken. Ghani was mauled and strangled."

I found a police report in the Balochistan Times, dated May 7, 2011, which says briskly that both men ...

" ... were abducted from Docks Thana, within few minutes, and their dead bodies were discovered from Machar Colony. The Fisher Forum communities lodged a strong protest against the issue, blocking IIC Bridge for quite some time, resulting in worse traffic jam. However after successful pursuance by administration the blockade was lifted and the crowd dispersed, peacefully."

The Islamabad Pulse reported that news of the murders traveled up and down the Pakistani coast and many fishermen declared a day of mourning and wouldn't go out to sea.

But two years later, there've been no arrests, no prosecutions. This tale reminds us that there are places in this world — too many places — where for a few quick bucks, bad guys will just grab what they want and the good guys, without the muscle, without the organization, without support from public officials, can't push back. So, acre by acre, fish by fish, tree by tree, we keep losing ground. It's demoralizing to read stories like this, because we all know they go on every day, but that said, I've got another one, and in this one turns out a bit differently ...

The Good Looters, Story No. 2

We all remember when the National Museum of Iraq got invaded by looters, just after the Americans took over Baghdad. In his book Finders Keepers, writer Craig Childs says the U.S. Army had orders to protect the Mesopotamian treasures inside. The Museum was "No. 2" on their security list (The Ministry of Oil ranked No. 15), but somehow, he writes, "the military must have read the list upside down;" U.S. tanks showed up at the Oil Ministry, none at the Museum. The looting began. 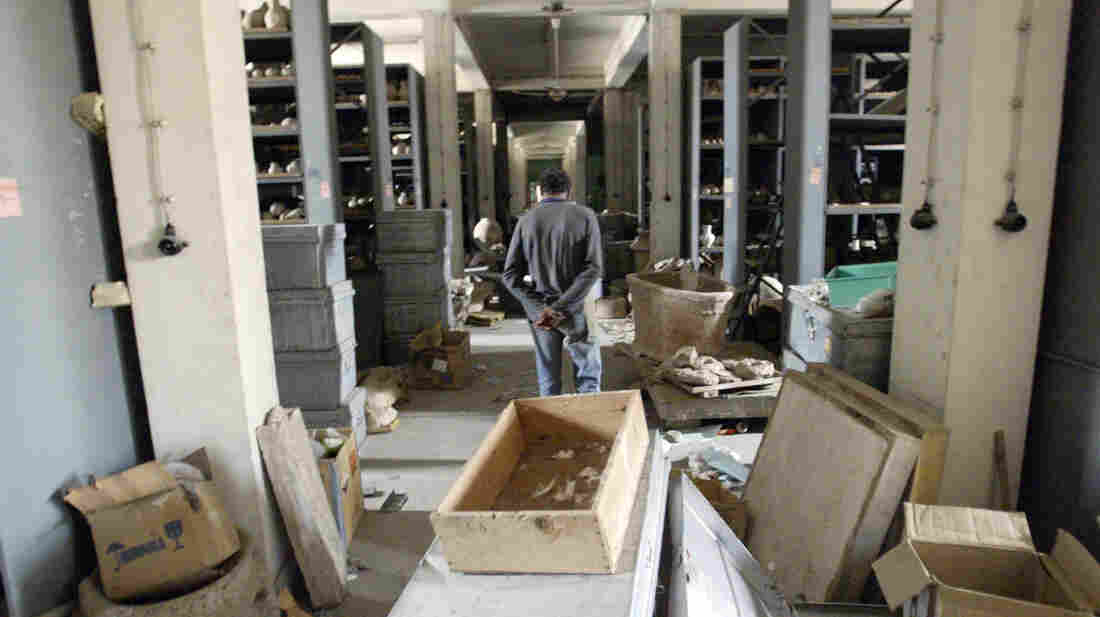 An Iraqi civilian walks through the vault of the National Museum in Baghdad, Iraq, on April 12, 2003. Looters opened the museum vault, went on a rampage breaking ancient artifacts stored there by museum authorities before the war started. Jerome Delay/AP hide caption

They Knew Exactly What They Were After ...

The late Donny George Youkhanna, director at the time, told Craig most of the invaders were amateurs, filling sacks with jewels, vessels, whatever looked promising, but a few of them, an organized few, were far more methodical, "showing up with glass cutters and keys. These men knew exactly what they were after ... [They] walked past replicas of artifacts that would have tricked the general public" and went straight for the good stuff, shattering glass cases, ramming through locked doors. They were armed with guns and knives and no one got in their way. To do so would have been more than dangerous.

But in disguise, also in the museum that day, were the good guys. They were mostly young, dressed like all the others, carrying bats, satchels, trying to look greedy like everybody else, but they too had a plan. They'd targeted nine objects, principle pieces in the museum's collection. They got to the Museum early, got in, grabbed what they wanted, and got away. Then, Youkhanna reported, they came back.

A few days after the invasion, Youkhamma told Craig he was visited by one of them who said, once the museum was safe again, he and his friends would return what they'd taken. And they did, bundling their finds in ordinary looking fabric so no one would notice. Then a man and his brother came to Youkhamma to say the same thing. Vases, statues, figurines, seals, scrolls, coins began filtering back. Within five years, "over half of what was originally stolen," Craig says, was returned. 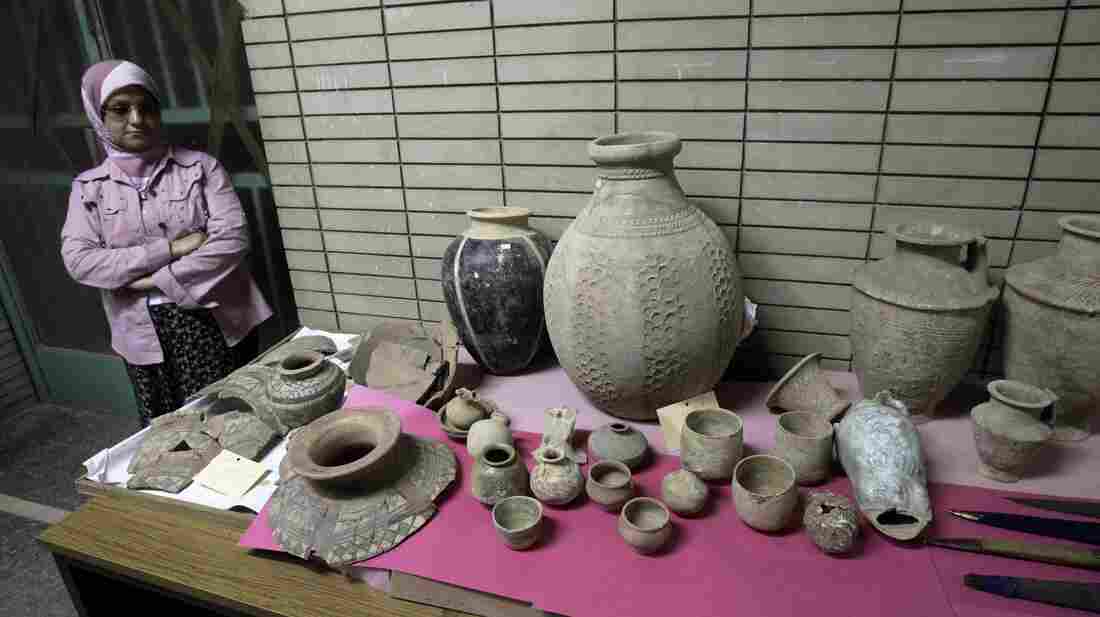 Some of the loot was confiscated in police raids, by Jordanian customs, by prosecutors, but some very important items are back on display because a sly group of people slipped in ahead of the bad guys and "stole" them before they could be really stolen.

They had no motive but the common good, and they did what they did because they wanted to, and that's why this second tale matters. It gives me hope. It's evidence for my hunch, (and that's all it is, a deep hunch) that while the world is full of bad guys who are always, always waiting to pounce, there are always, always good guys too, sometimes hanging back slyly, waiting for their chance to make things right, sometimes winning, sometimes dying — but always, always there.

Alan Weisman's new book explores how our exploding human population is dangerously affecting our air, land and sea. It's called Countdown: Our Last, Best Hope for a Future on Earth? and Craig Childs' book about stealing, buying and selling ancient objects is called Finders Keepers, A Tale of Archeological Plunder and Obsession.