Accessibility links
Watch Daniela. She's Up To Something Big : Krulwich Wonders... Daniela Rus' lab at MIT is inventing new, ever more remarkable "reconfigurable robots." Don't know what they are? Well, take a look at what her grad students have made and prepare to be frightened — or delighted. Me? I'm kinda delighted.

Watch Daniela. She's Up To Something Big

Watch Daniela. She's Up To Something Big

In a nutshell, they are letting machines design themselves — guided, at least for now, by humans. 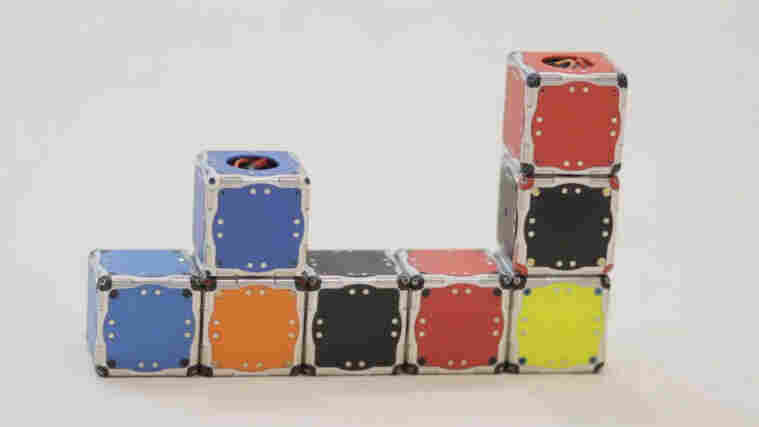 They're not teaching machines to copy themselves. No, it's bigger than that. They are building robots that can rearrange their parts when they need to do something new. Suppose, for example that you see an apple high up on a tree — too high to reach. What if you could grow extra long arms to get what you want? That's the notion here. As your goals change, your body can change too.

Step by step (I've already blogged about their magical bag-o-sand toolkit) they are creating the basic building blocks of what's called "a reconfigurable robot." And to my amazement — robot bits have learned to leap through the air! 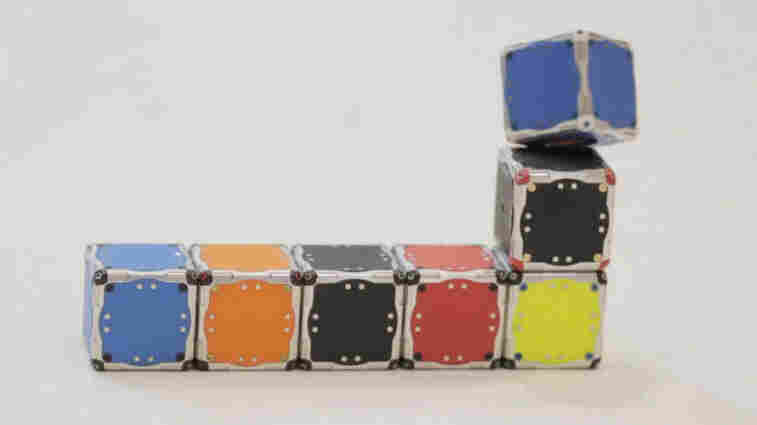 The concept of a reconfigurable robot is simple: Make a cube that can move to sit on another cube, then another, so that it can build different shapes. Sometimes like this ... 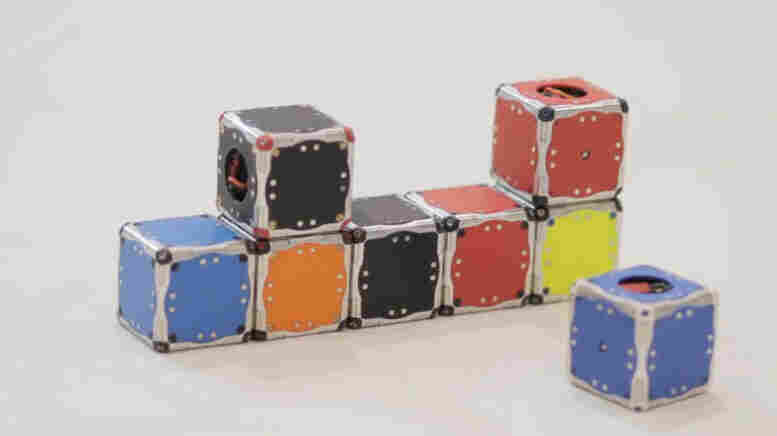 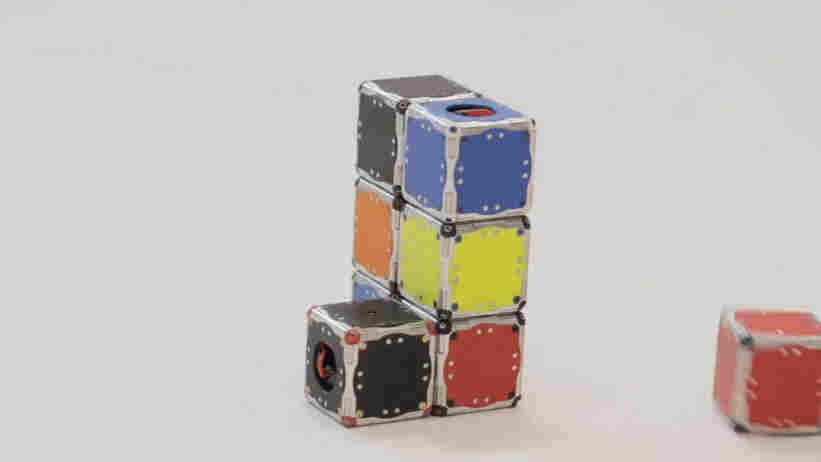 And eventually, the bits can turn themselves into a chair, a support beam, a tool, or a Terminator robot that saves little boys from being killed so they can save the future world.

Snap In, Snap Off, Move

The hard part is getting the bits to do this on their own. First off, they have to learn three basics: How to snap into place, unsnap, and move.

John Romanishin, who's been building robots and competing in robot derbies since he was a baby geek, figured out how to slip an itty bitty flywheel into the cube. It looks like a miniature desk fan that rotates up to 20,000 revolutions per minute — it comes with a battery, and when the flywheel is on, the cube has momentum: it can climb, roll across the ground, crawl up another cube, even leap through the air. "Which is pretty exciting," John says, "because it allows robots to jump on top of each other and go places that they couldn't go if they were only moving directly on the structure."

It has no moving parts on its outside. The motion comes from within.

When the fans turn off, a series of magnets on all six cube surfaces allow it to snap into place wherever it is, onto the cube it's next to, which creates an enormous number of possibilities ... Just take a look.

Daniela Rus, who has a knack for finding very whizzy whiz-kids, even for MIT where the whiz population is pretty high, says her grad students John Romanishin and Kyle Gilpin are still telling the cubes what to do, sending instructions via wifi — but one day, they won't have to.

[They] decide how, when and where to move.

In the future, we envision putting the algorithms on the modules themselves so they completely autonomously, in a distributed fashion, decide how, when and where to move, so we want to be able to take a large group of cubes and tell them, "form this shape" and give those instructions at a very high level, and then have the cubes decide on their own how to go about accomplishing that task.

As long as these thingies do our bidding, all this is good. At Daniela Rus' lab, they talk of bridges that repair themselves, tools that assemble when you need them, robots that can explore, rescue and adapt to changing conditions. Part of me, of course, doesn't completely trust an increasingly autonomous, increasingly inventive machine, but I think for the moment, the plusses way outweigh the minuses, so I say "Keep goin', Daniela!" On rainy days when I'm am desperate for an umbrella, I'll be thinking of you.

Here's the MIT press release that describes what Rus' guys are doing. Thanks to Erik Olsen for sending this my way.