Accessibility links
Science Reporter Emily Graslie Reads Her Mail — And It's Not So Nice : Krulwich Wonders... Reporter Emily Graslie explores natural history museums, showing us what's going on behind the scenes. Her viewers write her, of course, and in this video, she reads some of those letters. They're not about science. Or Museums. They're about Emily. And it's embarrassing.

I've said it before, so I'll say it again: Emily Graslie's "The Brain Scoop" is one of the warmest, slyest video blogs on the web. She's where I go to find out what museum scientists are up to — and right now she's at the Field Museum in Chicago, where she wanders from department to department, exploring, delighting, asking questions that you and I would ask if someone gave us a free pass to gawk our way through one of the great natural history museums in the world. So I was more than a little surprised to catch her recent post, a meditation on the mail she gets. 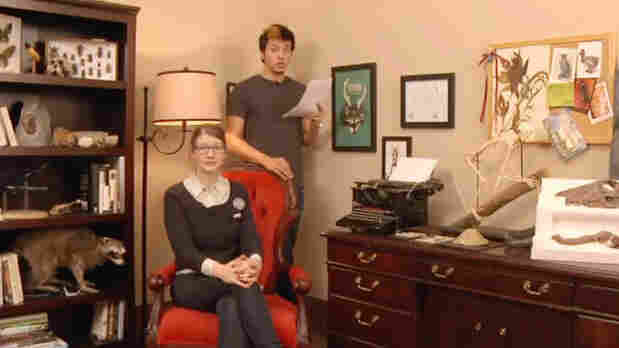 It turns out her mail is, well, troubling.

Many of the folks who write her, write not about the science, but about her body, her looks, her clothes, and do so without any apparent embarrassment. She's a science reporter who happens to be a young woman, and her woman-ness is the thing they focus on. The science, to her chagrin, often takes second place.

In her new video, Emily (with help from director and video editor Michael Aranda) gives us samples from her mailbox, She's not mad, not exactly. Instead, she just explains why these matter-of-fact little letter bombs make it harder for her to work, and how they hurt — every single day. And, being Emily, she explains it very well.