Accessibility links
How Important Is A Bee? : Krulwich Wonders... When bees disappeared from central China years ago, Chinese apple farmers had to pollinate by hand. Embarrassing — people doing bees' work, but then came the big discovery –- a surprise that still haunts the conservation movement. What if people outperform bees?

How Important Is A Bee?

How Important Is A Bee?

This is an alarming story, not because it ends badly. It's alarming because it ends well. It shouldn't have, but it did, and biologists (and especially conservationists) now have a puzzle to ponder. 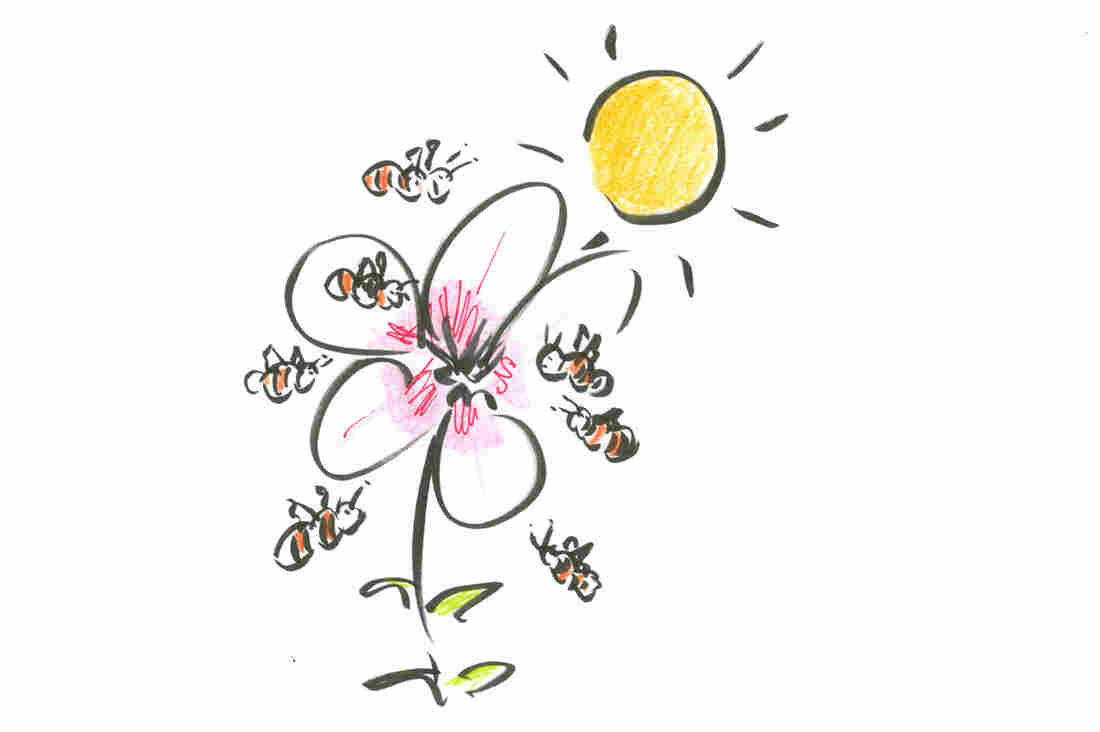 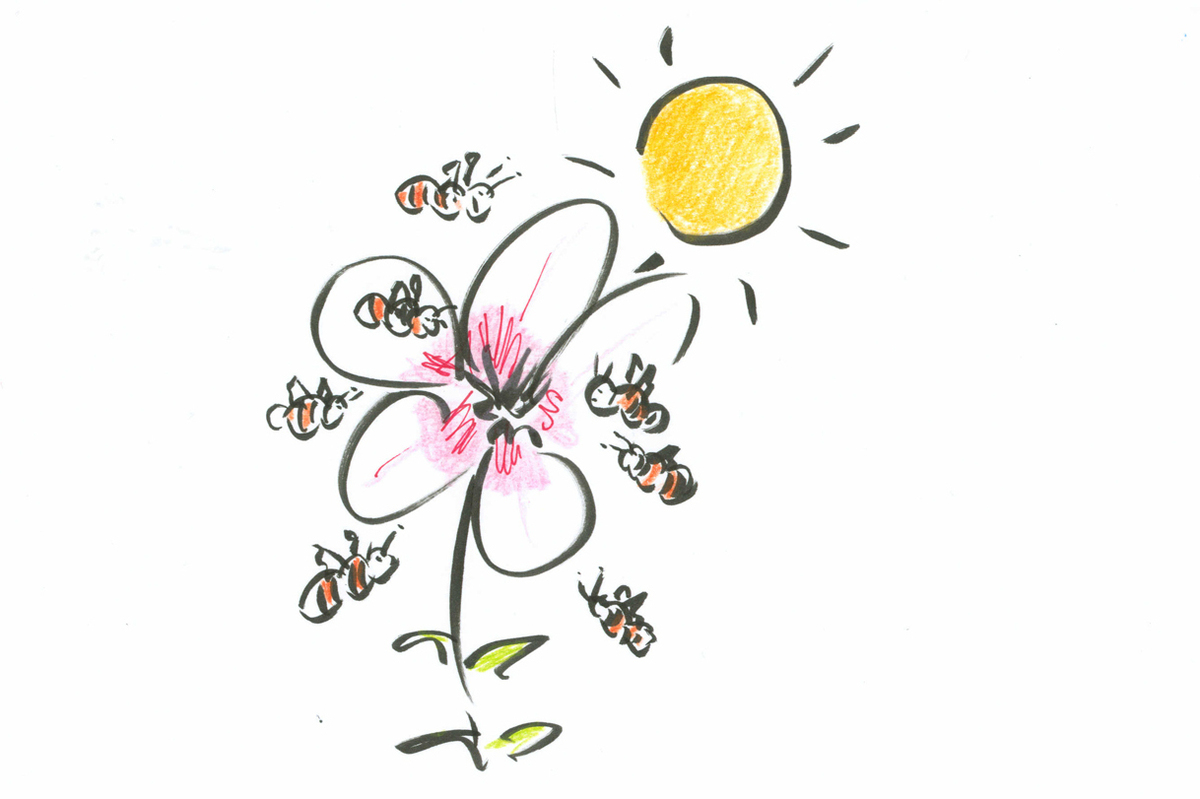 The story begins in central China, in an apple-growing region called Maoxian County, near the city of Chengdu. In the mid-1990s, the bees that regularly showed up there every spring suddenly didn't. Apple farmers, obviously, need bees. Bees dust their way through blossoms, moving from flower to flower, pollinating, which helps produce apples in September.

What happened to the bees? 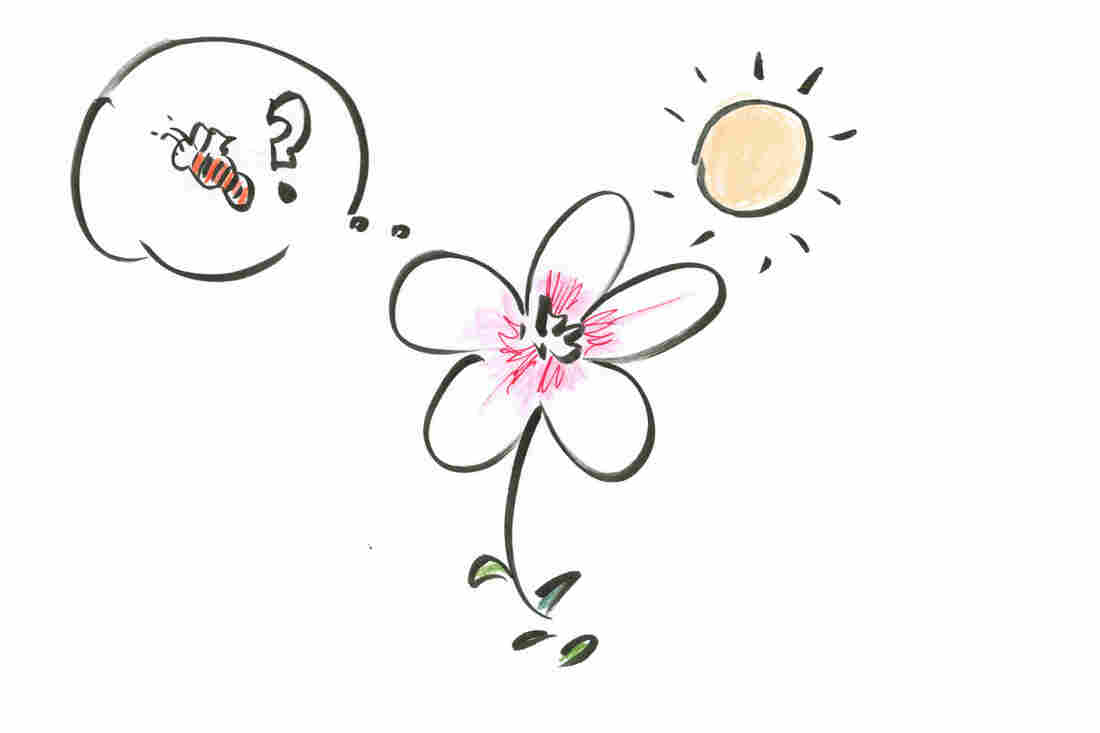 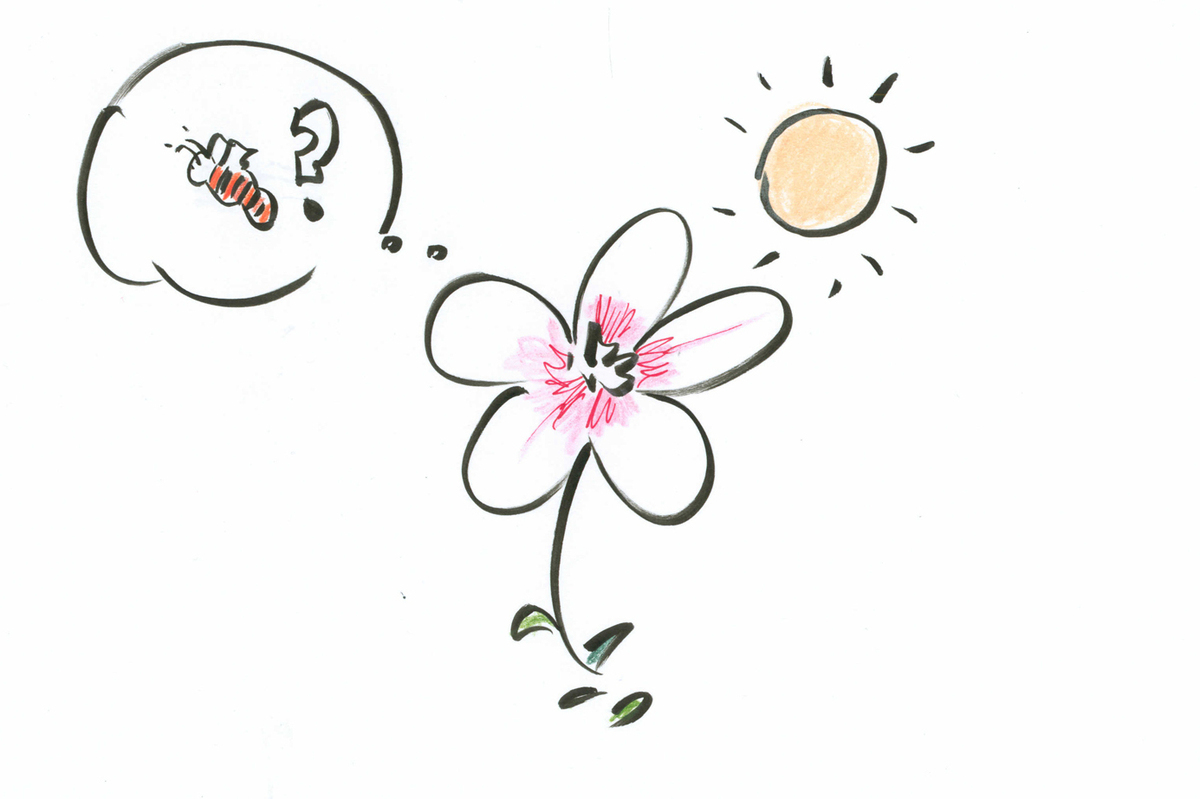 Science writer J.B. MacKinnon, in a book, blames pesticides, in part. But there's no single explanation. He also says "(h)oney hunters were taking too much honey. People were chopping down too many trees."

Whatever the reason, the bees went missing and the farmers had to do something, and do it quickly. So they decided to replace bees with humans. They pollinated by hand. 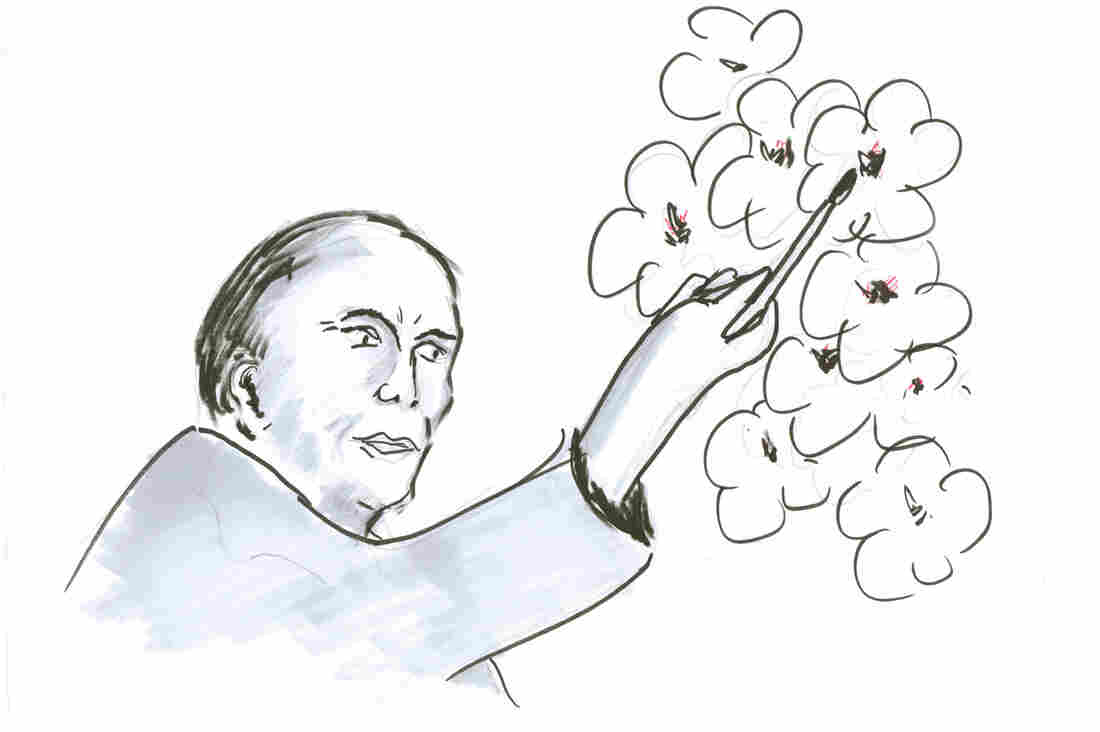 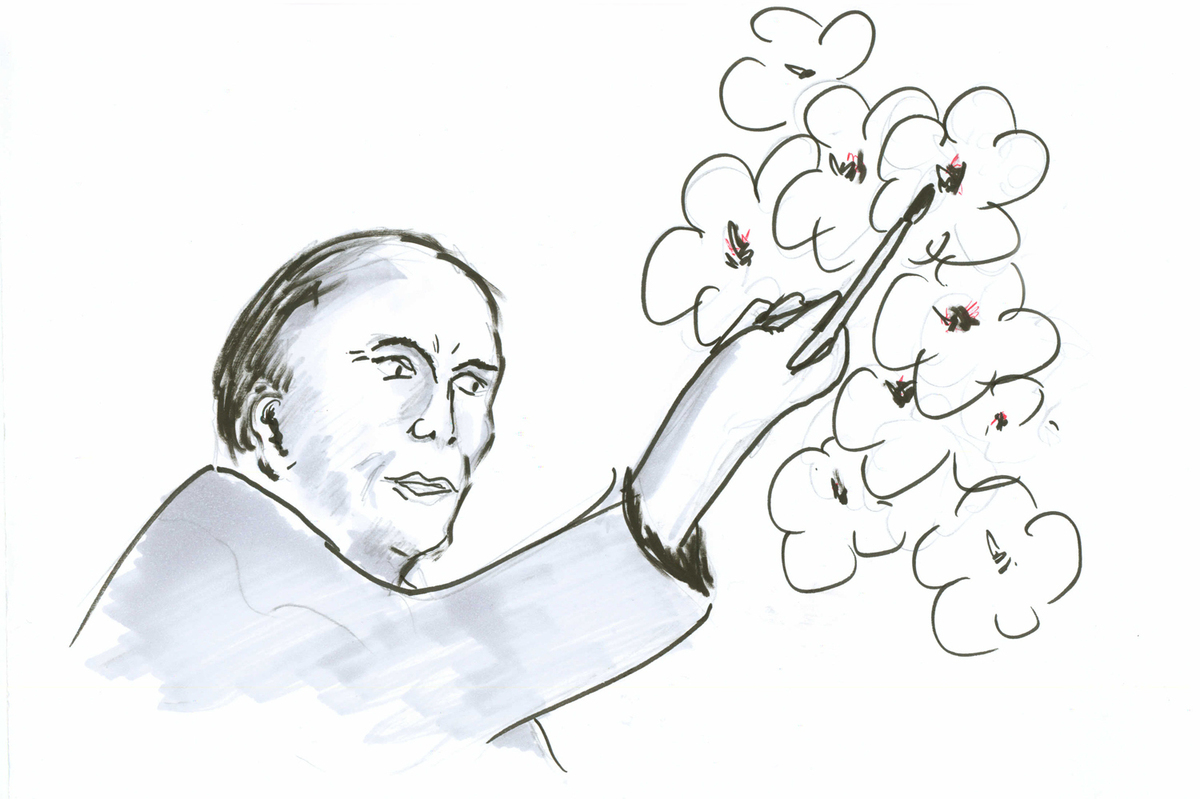 In 1997, Maoxian apple growers, using brushes made from chopsticks and chicken feathers (and sometimes cigarette filters), went from blossom to blossom — just as bees do, to spread pollen. People worked full shifts, moving up the hillsides as each orchard hit blossom-time. News stories were written about this, with the obvious conservation moral: See, biologists said, this is what happens when we don't take care of the smaller creatures, the pollinators, the leaf eaters, the beach cleaners — the little critters we depend on! When they disappear, the work they did for free suddenly becomes expensive. That was the moral of the Bee Story — until three economists took a second look.

The Economists' Version of the Bee Story

John Gowdy, of Rensselaer Polytechnic Institute in Troy, New York, along with colleagues Lisi Krall and Yunzhong Chen, arranged interviews in Mao Xing county with the local farmers — first early in the 2000s, and again (when Chen went back) in 2011.

What they learned (and published) was a shocker. First, the apple farmers reported that apple production was not hurt by the absence of bees. In fact, the apple harvest was "30 to 40 percent greater" when humans did the pollinating. "Human pollinators," wrote J.B. MacKinnon, "were better at getting to every blossom, performed cross-pollination more efficiently, and could work in windy, rainy weather."

Bees, you should know, are less dependable. They don't like working when it's wet. 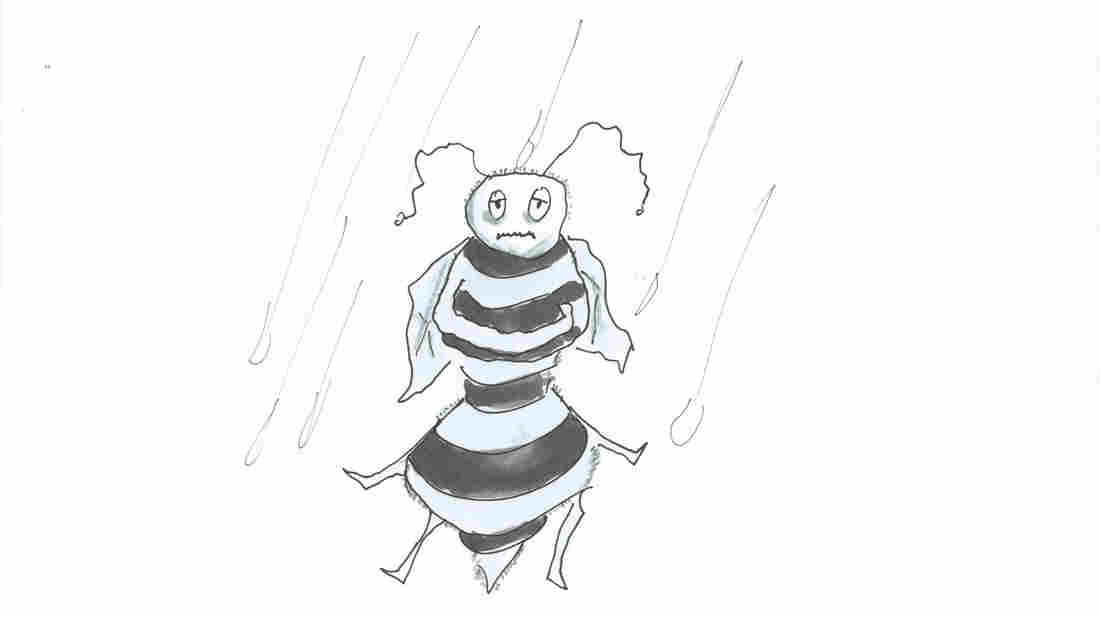 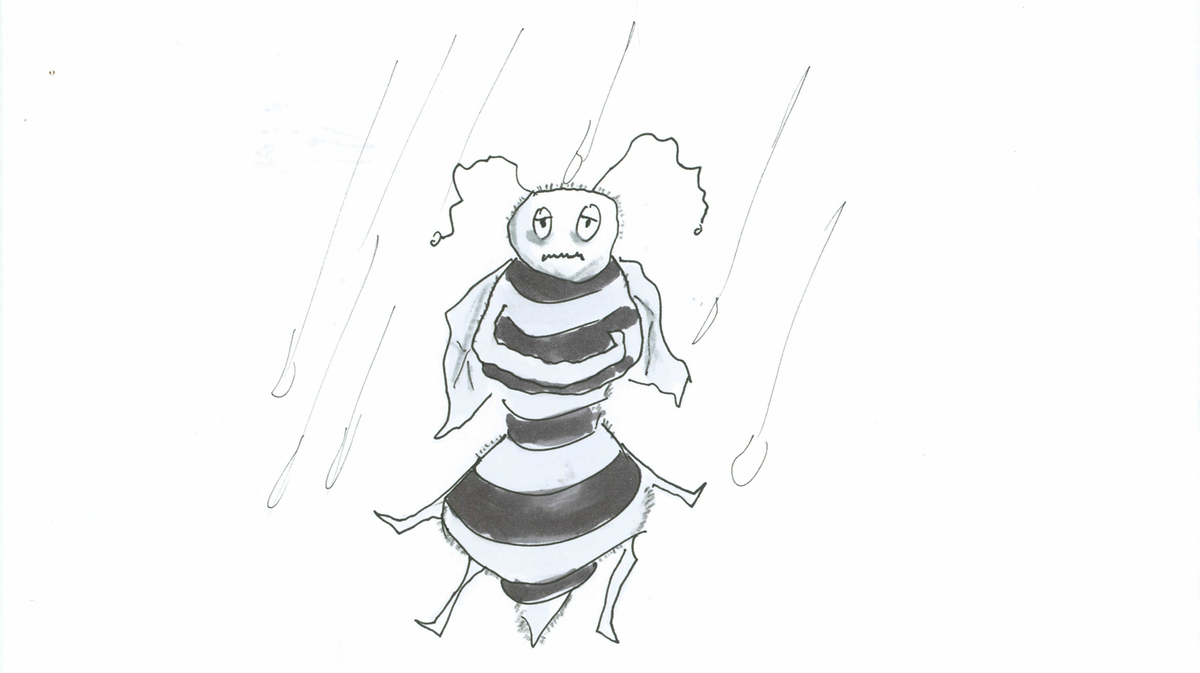 They sleep a lot. 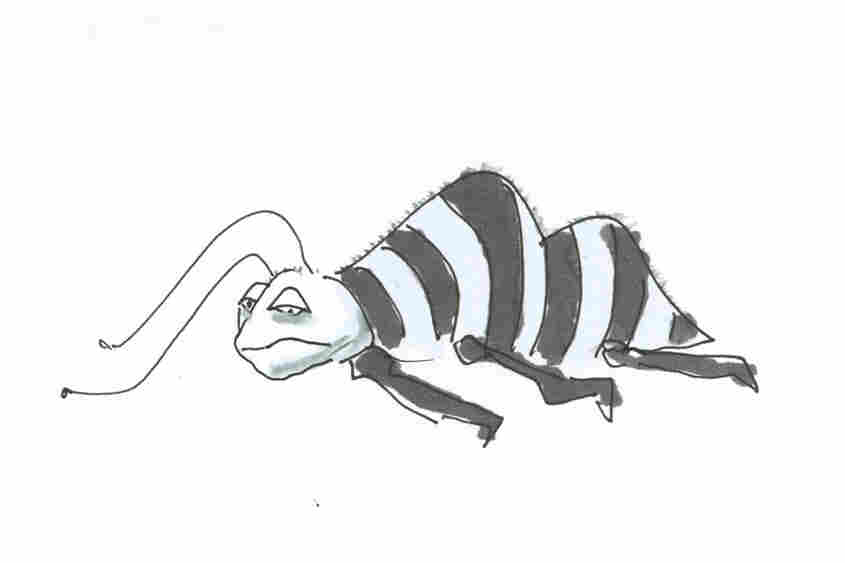 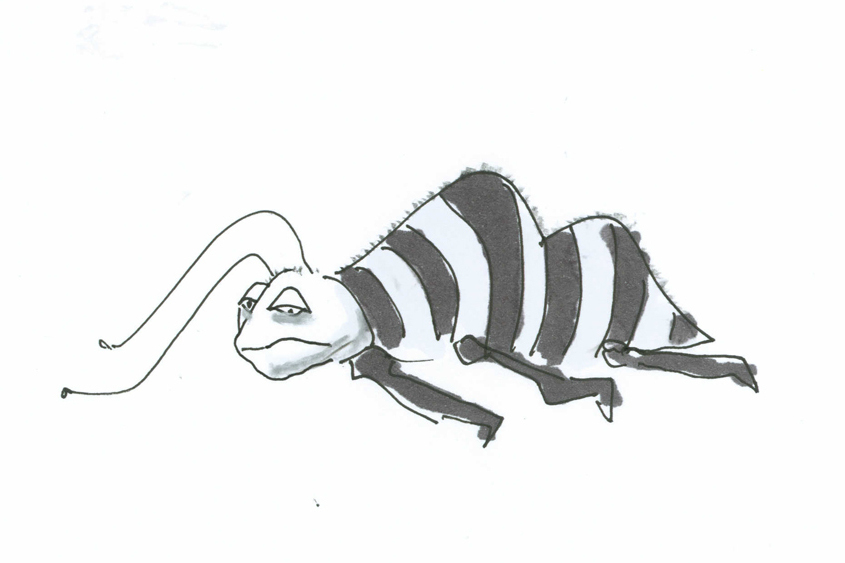 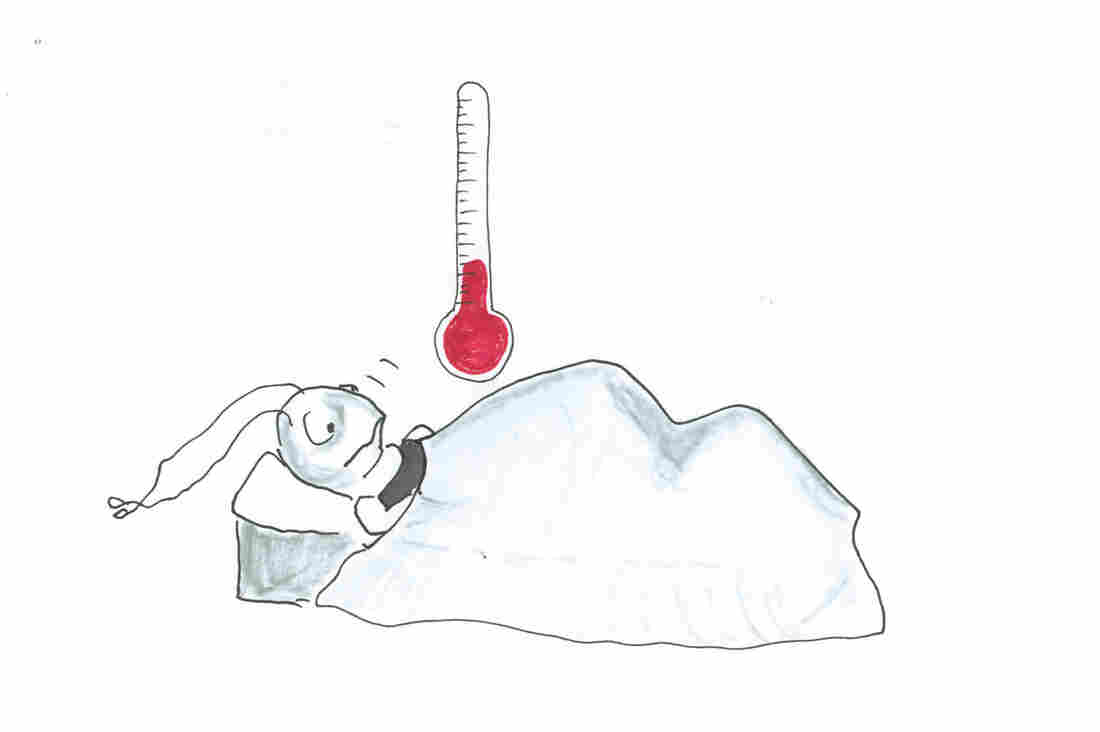 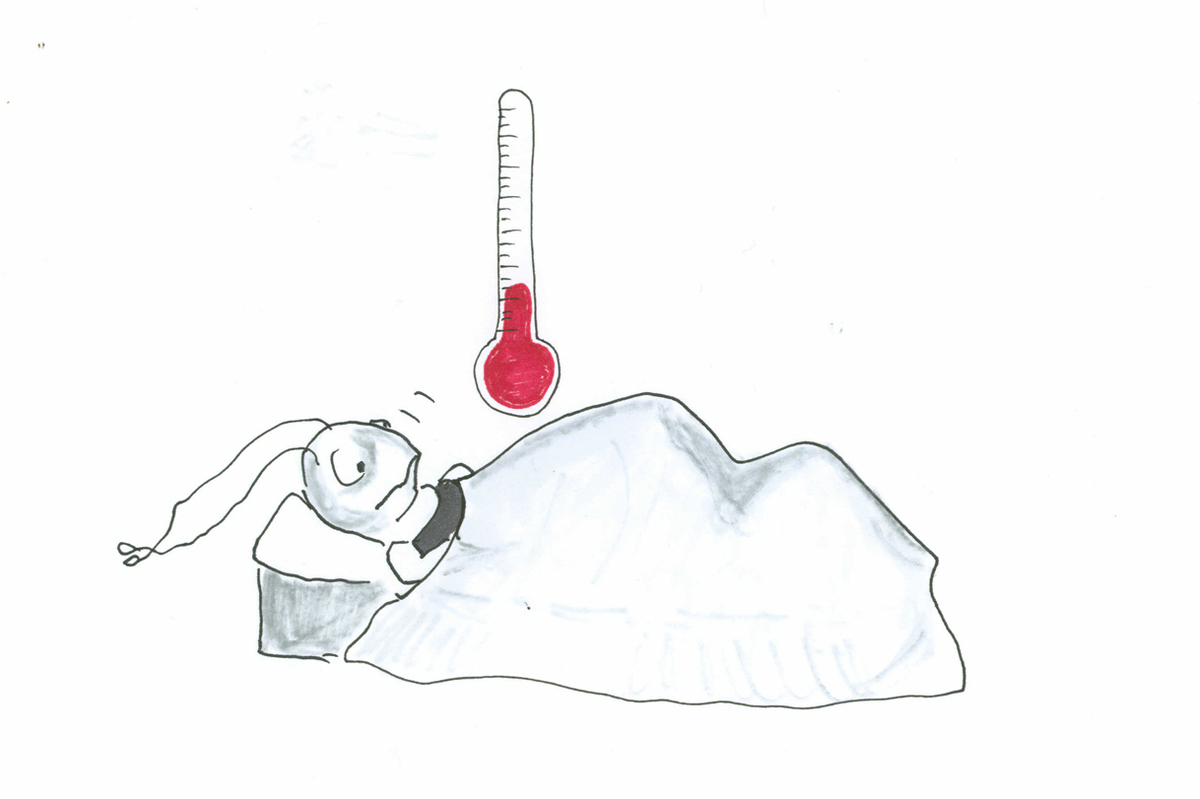 What's more, from an economic perspective, people contribute more to the local economy than bees do. When Chinese workers get paid (even though in this case much of the work was bartered), they use their money to buy food, get haircuts, and pay rent. And those payments employ other people. "Worker bees don't head off to the bar or the grocery store when their day is done," writes MacKinnon.

Which is why in a paper they called "The Parable of the Bees," the economists seemed to turn the moral of the Bee Tale on its head. They declared,

Using the example of apple tree pollination in Maoxian County, China, we argue that destroying and replacing the free gifts of nature can be an economic benefit.

Apple farmers, they concluded, "prefer to use human beings because ... with [the increase in yield and fairly low labor costs] it makes economic sense to use people instead of bees."

Woah! Well, you can imagine what biologists must have thought. This paper sounds as if the economists said there are some critters we humans don't really need to have around to lead a good life. So let's not get hung up on biological diversity, because we can live fairly well — maybe even be better off — in a less diverse, biologically shrunken world.

The next question being, what other animals don't we need? 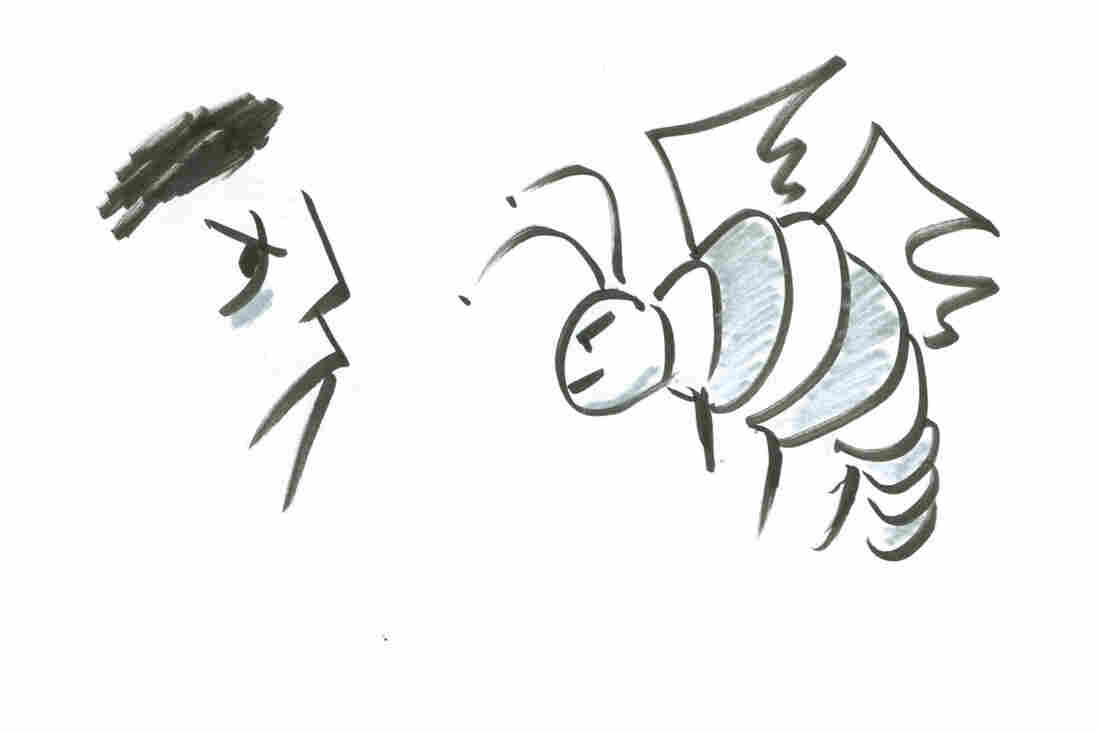 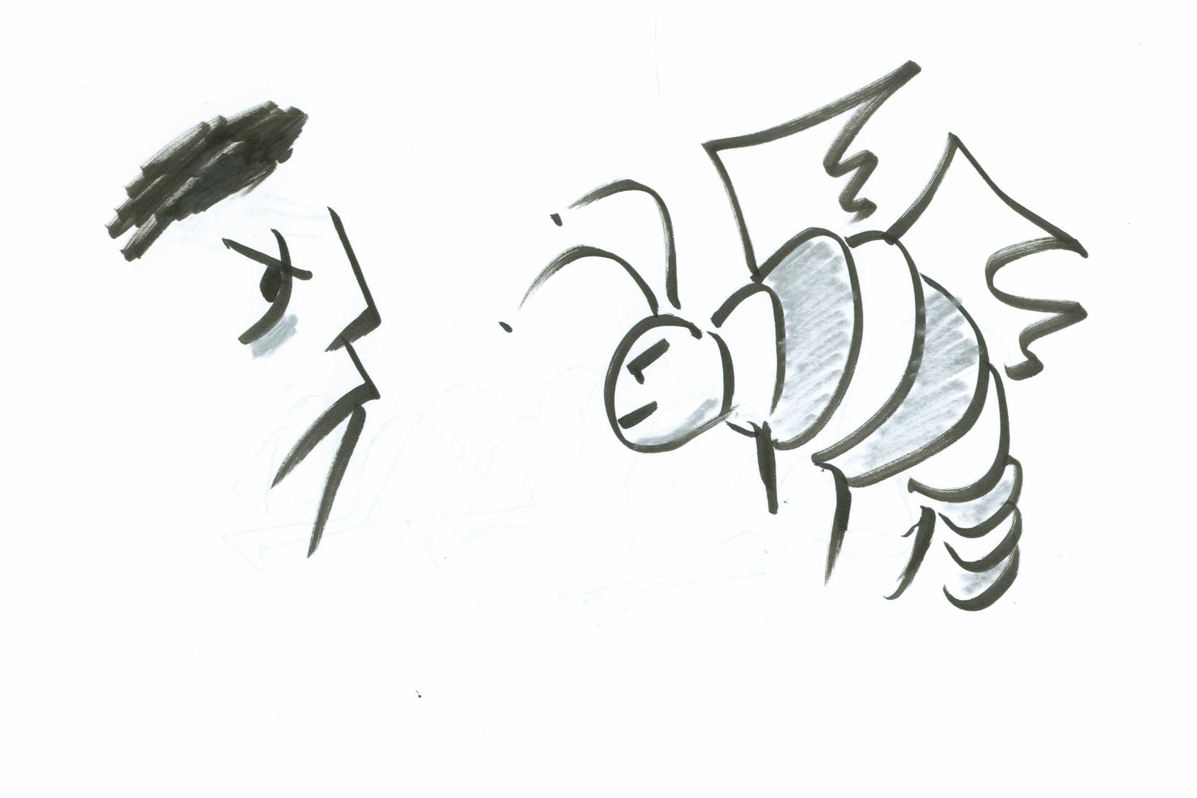 All of us think about this from time to time. In a world with 28,000 different species of beetles, is it so terrible to imagine living perfectly well with a few hundred or even a few thousand fewer? Beetle lovers and conservationists believe the right thing to do is to save as many as we can — all of them if possible. But in a practical way, with an extra billion new humans on the planet every 13 years, we know there's going to be habitat loss. Somebody's got to go, but who? Which ones do we sacrifice? If three endangered species of beetle differ by the number of red dots on their abdomens, what do we do? Roll dice? 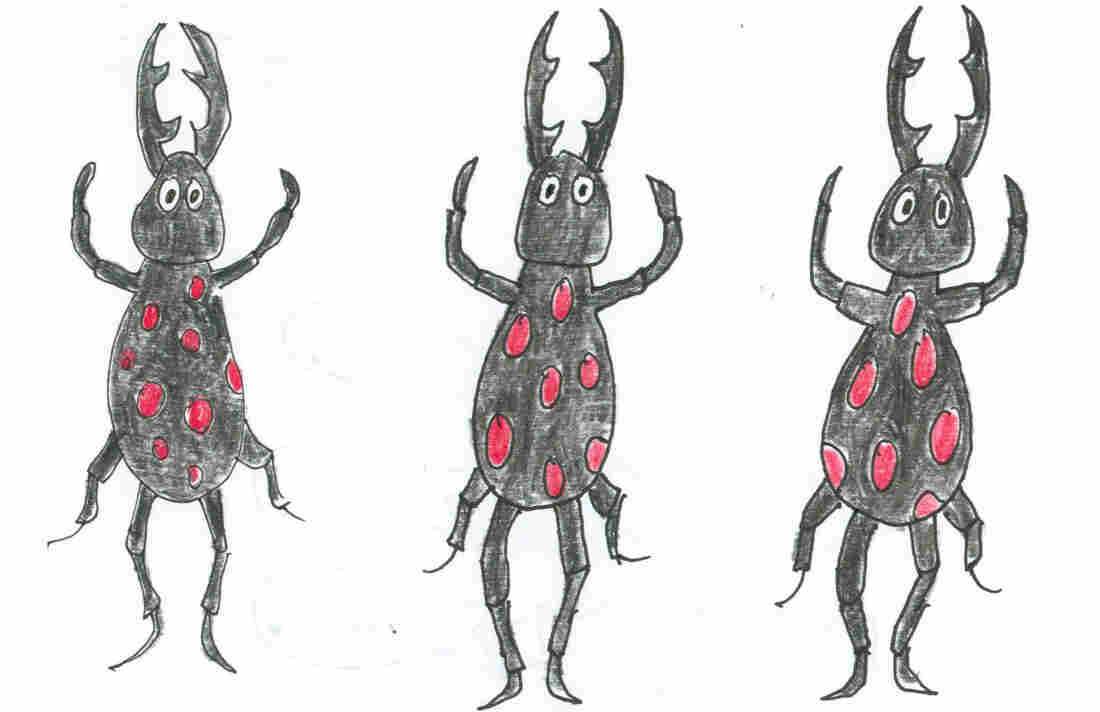 One approach, of course, is to put a dollar value on living creatures. If worms regularly aerate and turn the soil in a pasture, what would it cost to replace them if they disappeared? For years, economists have been asked to measure the "ecosystem services" of trees, insects, and animals, big and small. A dollars-and-cents evaluation feels like a more rational, more businesslike way to make decisions about what's worth protecting.

The 'Real' Lesson of the China Bee Story ...

The problem is, it's not easy to do. It may be impossible. Yes, we can measure a bee's contribution to the apple business. But bees also make honey and can see things we can't (with eyes that may one day teach us something about vision). Bees might one day evolve habits or chemistries that will help our great-great-grandchildren. There is also a value to simply having bees to look at, buzzing out the window in the garden. How do we know what our grandchildren will value, will want, will need? Economists can't measure things that haven't happened yet. And while apple farmers might profitably replace a honeybee, what would it cost to replace a redwood tree, assuming we could ever build one?

The three economists — Gowdy, Krall and Chen — end their "Bee Paradox" paper saying that even though people outperformed bees in apple orchards, that should not argue for their elimination. On the contrary, they say, the Maoxian case study "illustrates the danger of allowing the logic of the market to drive conservation policy ... [The Bee Story shows] the danger of leaving the fate of nature to the whims of the markets, even if prices are "correct."

In other words, they're saying, don't come to economists to resolve this. Life is not reducible to cash equivalents. Those missing bees weren't valuable in Maoxian County, but that doesn't mean they don't have value. These decisions are much more complex.

So what's to be done? Conservation groups have spent the last 60 years saying, "Don't touch that beetle! Or that one! Or that one!" And it hasn't worked. The group that tracks these things, the International Union for Conservation of Nature, shows with its Red List of Threatened Species that species of mammals, birds, amphibians and corals keep declining.

"We know absolutely that something has to be different," says Jon Hoekstra, chief scientist at the World Wildlife Fund.

And so, for a number of reasons, one by one, prominent conservation groups are shifting to the "money matters" side, and stepping away from a strong defense of biodiversity. As environmental journalist Hillary Rosner reports in the magazine Ensia,

Chat with a conservation leader today and you're likely to hear some fairly surprising things. We can't do it species by species. Protected areas aren't going to be enough. Saving the last place or the last of the species is not our focus.

The exact messages may differ ... but the theme is constant: Something needs to change.

The change that's coming has different names. It's called "people friendly" or "business friendly," or "adaptable." It seems to be consciously less confrontational, and more willing to find a middle ground, to work with big companies, and local communities and to concentrate on finding new, economic, or practical rationales to keep plants and animals going. Instead of the old conservation war cries, "More Parks!" or "Every Beetle Matters!" this message tilts strongly in the opposite direction.

... a new vision of a planet in which nature — forests, wetlands, diverse species, and other ancient ecosystems — exists amid a wide variety of modern, human landscapes. For this to happen, conservationists will have to jettison their idealized notions of nature, parks, and wilderness — ideas that have never been supported by good conservation science — and forge a more optimistic, human-friendly vision.

Did he say "jettison?" And "idealizied?" Those are fighting words. More traditional conservationists were horrified, calling this a surrender, an indefensible, inchoate, dangerous position that will hurt the cause of biodiversity, and condemn more living creatures to a quicker extinction. So the pot is now boiling, with angry back and forths on the chatlines at the Nature Conservancy, the World Wildlife Fund, and across the conservation world. This is getting wild, and very interesting.

There is a lesson to be learned from those missing bees in China, but what that lesson is has become a big, angry question. I'm going to come back to this ... often.