Accessibility links
Why We Need Grandpas And Grandmas (Part 1) : Krulwich Wonders... The idea seemed sensible: Send young elephants from a crowded national park in South Africa to an emptier one, where they could form a new herd and thrive. The problem? Elephants need elders. Without them, all hell breaks loose.

Why We Need Grandpas And Grandmas (Part 1)

Why We Need Grandpas And Grandmas (Part 1) 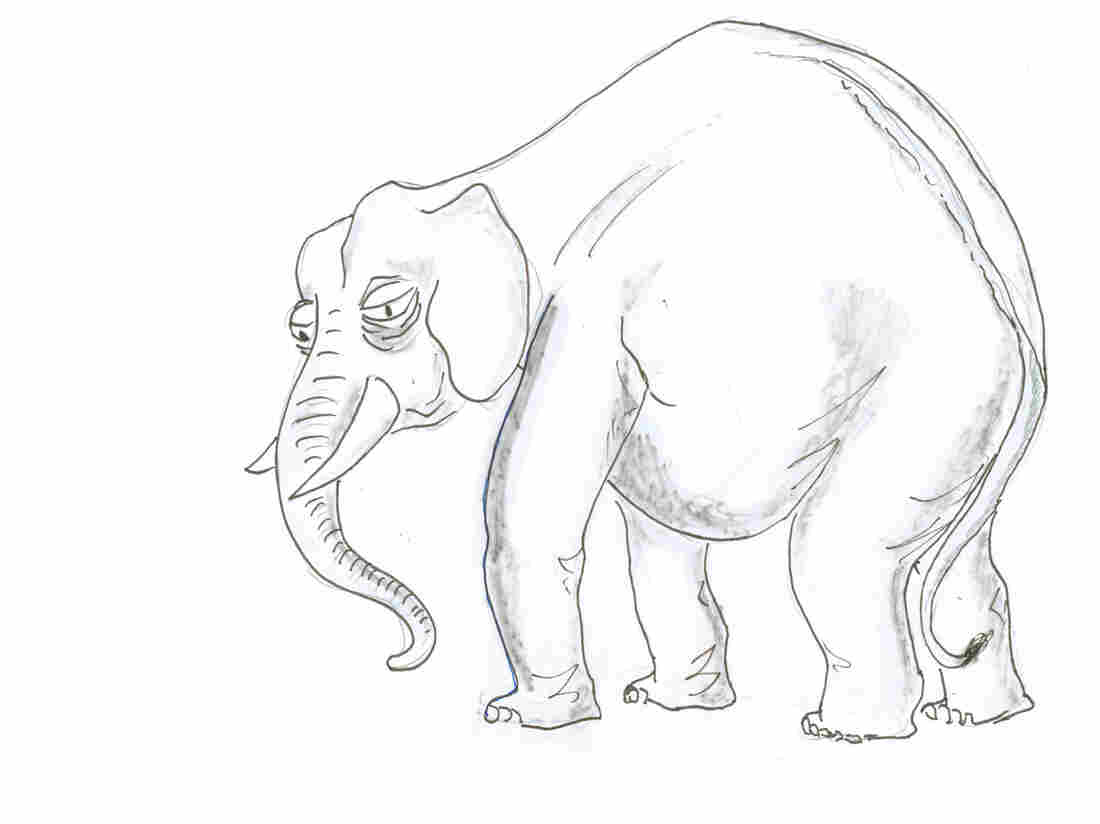 Oldsters, it turns out, matter. They matter a lot. And not just in human families. I've been reading a new book called The Once and Future World, by J. B. MacKinnon, which points out that when we humans hunt game, when we fish the sea, we often prize the biggest animals because they have the biggest tusks, or the most protein, so they're the ones we kill first. But in many species, the biggest animals are also the oldest, and if we eliminate too many grandpas and grandmas, pulling them out of the mix can unravel the social order around them — often with totally surprising consequences. But — restore those elders to their proper place, and things can get better. Here's an example. It's an elephant story. (Tomorrow, I'll talk about fish, but today is Elephant Day.) 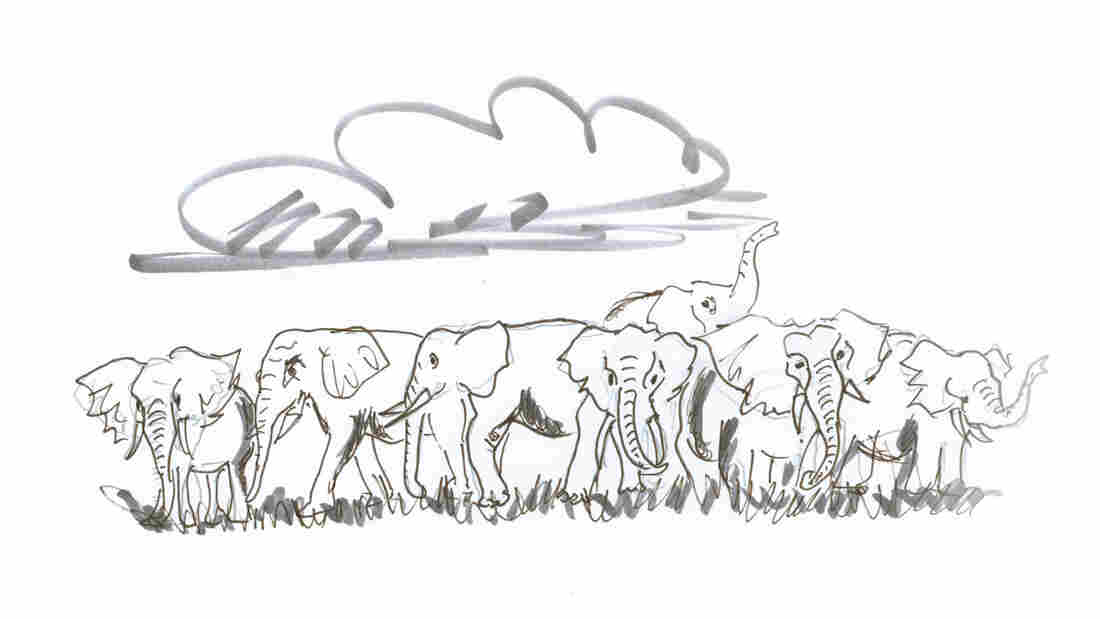 Our tale begins in Kruger National Park, a giant game reserve on the plains of South Africa, one of the world's most famous and visited nature preserves. Kruger is home to 8,000 elephants — or, rather, 8,000 is the optimum population for the park. But the elephants, unaware of this, have a tendency to make more elephants, and the population keeps swelling, which upsets the natural balance, and so for years, park rangers have had to "cull" the surplus, which they did by darting the older animals from the air, and then shooting them to death on the ground, often in front of younger members of the herd.

Gamekeepers, I'm sure, couldn't have liked this part of their job. So it was decided, back in 1994, to round up some of the surplus animals and ship them to other parks — to sort of spread the elephants around rather than eliminating them. 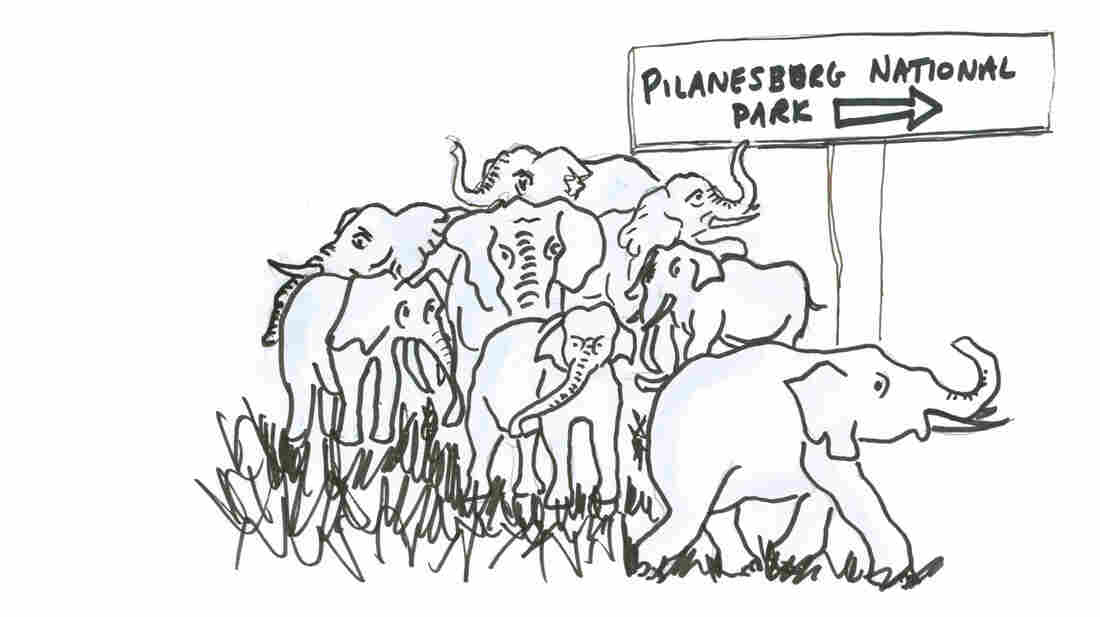 And that is why, in the 1990s, about 40 young elephants were taken a few hundred miles closer to Johannesburg, to a newly constructed nature reserve called Pilanesberg National Park, where they were to establish a new herd. Time passed, and after about ten years, rangers and biologists began reporting what science writer J.B. MacKinnon calls a "novel situation."

The male elephants that had been transferred became unusually violent. They were attacking each other much more frequently, sometimes attacking people, pushing cars off the road (which, in a tourist center, is more than a little concerning), but most of all, rebuffed by older females, they were going after female white rhinos, the largest available pachyderm in the neighborhood, and raping them. Then killing them. 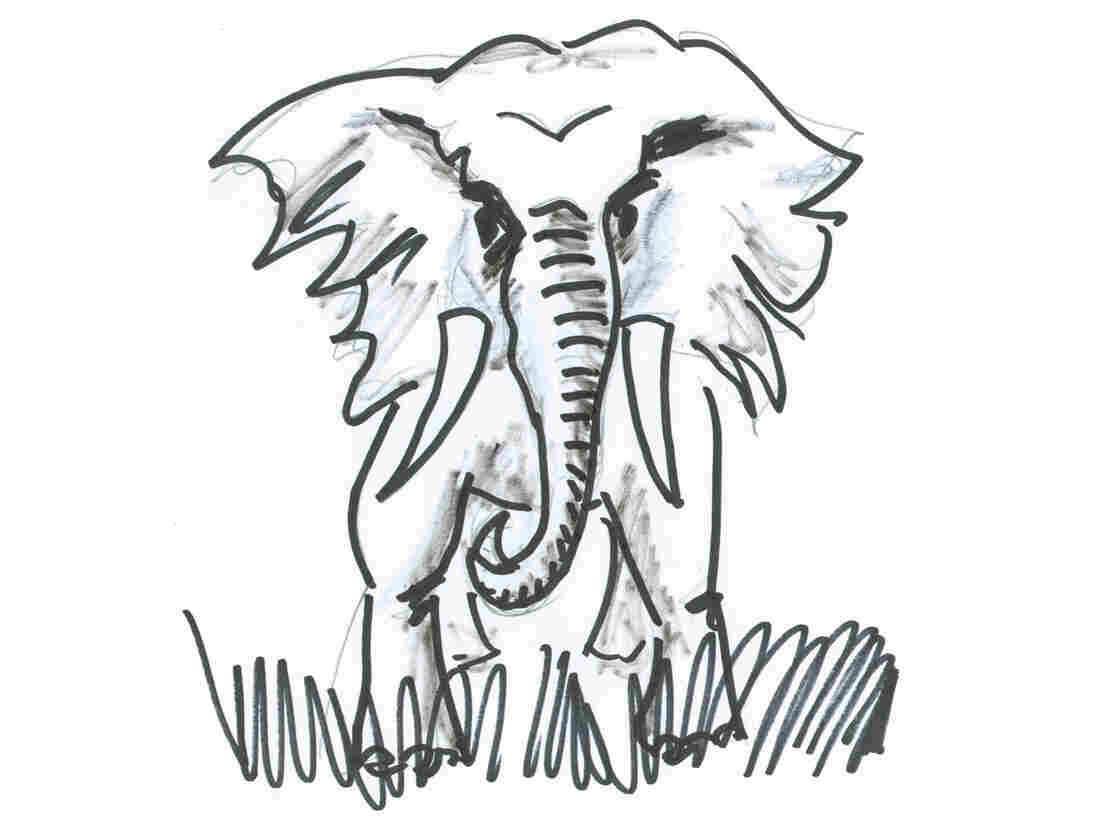 The New York Times reported that in one month in Pilanesberg Park, officials "shot three young male elephants who were responsible for the killings of 63 rhinos, as well as attacks on people in safari vehicles."

Park biologists tried to figure out what was going on, and while some scientists believe this is a case of youngsters permanently changed by watching their parents "culled," others have decided something simpler is going on.

When young male elephants approach sexual maturity, they go through a phase called "musth," where testosterone floods in at up to 60 times the usual levels, making them highly aggressive, irritable and dangerous. This usually lasts a short time — but not for the Pilanesberg Park males: They entered musth earlier and stayed in it longer, much, much longer. Instead of weeks, their frenzies lasted months — in one case for "as many as five months," reports J.B. MacKinnon. Why were these episodes happening for so long? Why weren't they un-happening?

That's when elephant scientists had a suggestion. In ordinary herds — where there are lots of big, older, respected male bull elephants around — when a teenager goes through his wild phase, he will get slapped down by a larger, older male. The younger male will attack, and when he's beaten ... something chemical happens ... 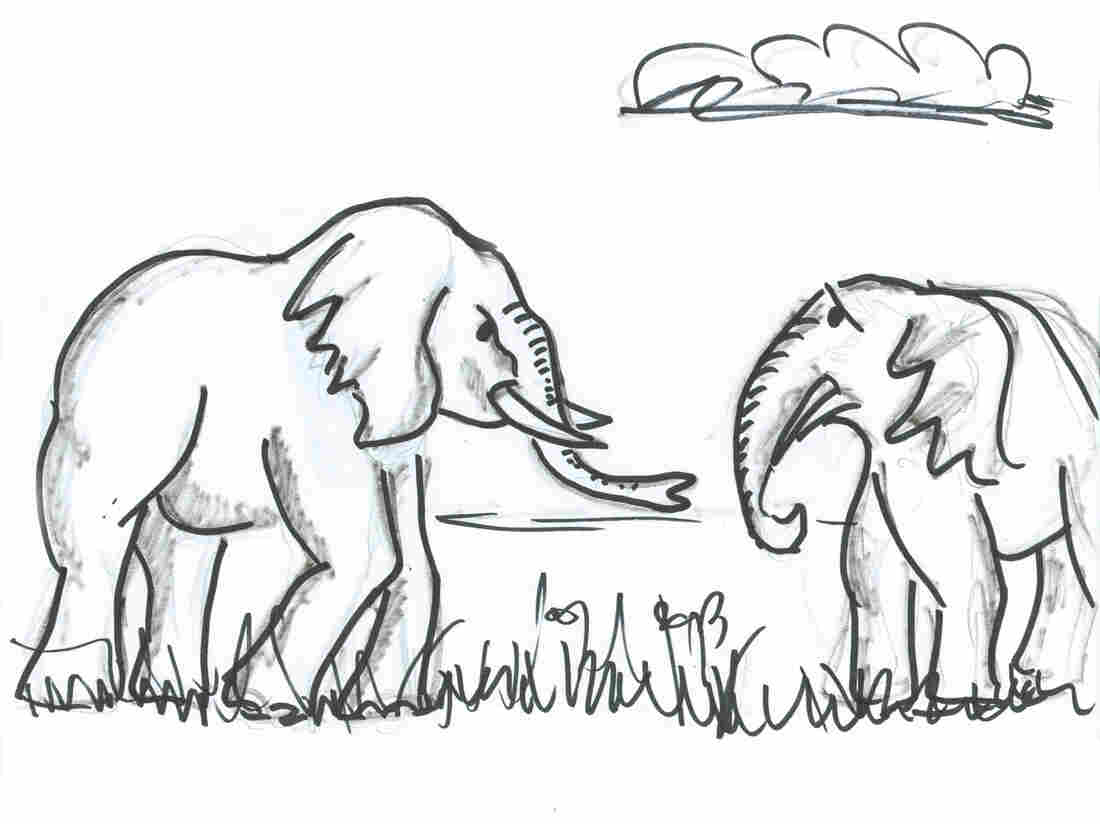 Says J.B.MacKinnon: "After standing down to a dominant bull, the rush of hormones in the younger male stops, in some cases in a matter of minutes." The cue to turn off the testosterone comes from getting bonked. So biologists suggested reintroducing a group of elders into Pilanesberg.

Six older elephants arrived, did what oldsters do to rambunctious youngsters, and not long thereafter, says MacKinnon, "the killing of rhinoceroses stopped." The verdict: The young elephants went wild mostly because there were no older elephants around to keep them in check.

The moral of this story is more subtle than, "Don't cull the oldsters." MacKinnon quotes a zoologist, Anne Innis Dagg, who argues that in our hunt for ivory, for whale oil, for fish protein, for trophy lions and tigers, we have eliminated so many older animals in so many species, that we have reshaped the natural world. Today, when biologists go into the field to look at elephants or fish (check back here tomorrow), what they are seeing is not the natural behavior of animal society, but the warped behavior of animals who have lost their elders, and who are now flailing in a diminished, disarranged world. Those missing grandmas and grandpas, far from being a luxury, are essential if we want to keep the world in balance. 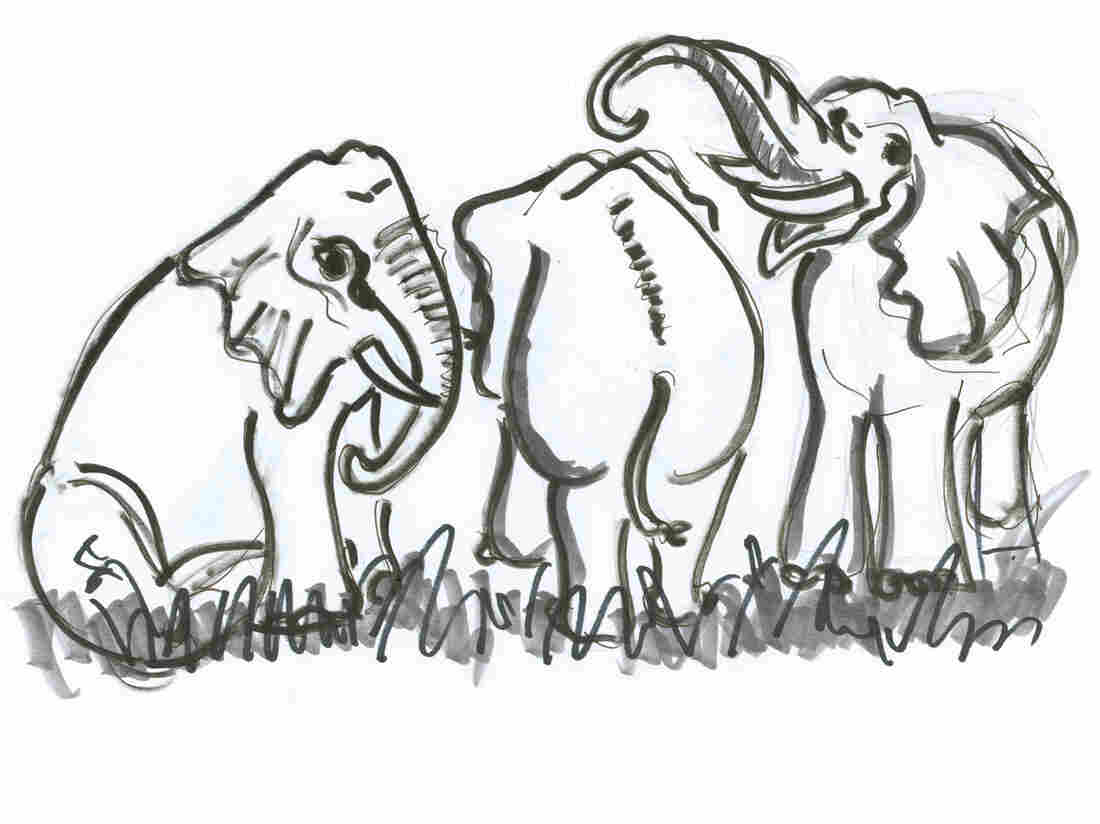 For a good grandma (as opposed to grandpa) elephant story, go to any search engine and ask about the 1993 drought in Tanzania, where elephant clans led by the most elderly matriarchs were able to find waterholes and survive. The older the leader (who remembered from previous droughts where to find water), the higher the survival rate of calves in the clan.