Accessibility links
Go Where Raisins Swell Into Grapes, And Lemons Light The Sky : Krulwich Wonders... Come to a place where peppers are so hot, fire trucks come to douse them. Pomegranates explode like grenades there, spaghetti threatens innocent sailors, and the moon is made of cinnamon. Two French food photographers imagine all this, and then let a polar bear water-ski through a plate of marshmallows.

Go Where Raisins Swell Into Grapes, And Lemons Light The Sky

Go Where Raisins Swell Into Grapes, And Lemons Light The Sky

There's a book by the novelist China Mieville that describes two cities plopped one on top of the other. One is large-scale, the other smaller-scale, and while they live in entangled proximity, both cities have the same rule. Each says to its citizens, pay no attention — on pain of punishment — to what the "others" around you are doing. See your own kind. "Unsee" the others.

In the novel, most people comply. They may be in the same place at the same time, but learn to not notice. A few, of course, break the rules and watch — even talk to one another — but they are cursed with restless, wandering eyes.

When I was seven, I had those eyes. I was keenly aware of a world superimposed on mine. It was littler than mine. But I knew it was there. I could imagine it at will. In my version, I could see my little people. But my little people rarely saw me.

I'd be in my bedroom with a toy speedboat. I'd add passengers – small railroad figures (also from the toy store), the ones sold by model railroad companies. I'd place my little people on the boat, or into the "water" (made of crinkly cellophane sprayed with Gillette "foaming" shaving cream to make tumbling waves, which hid tentacles of giant squid — my dad's pipe cleaners — looking scarily for something to squeeze to death). And I'd watch beautiful ladies with luggage spilling into the sea, getting oh-so-close to disaster ... unless I decided to rescue them, which, sometimes, with my giant hands, I did.

I spent hours and hours with my little people. That was my world.

Pierre Javelle and Akiko Ida live in this same world. But they are much, much better at it than I was. That's because they're adults living in Paris, and they've got wonderfully ridiculous imaginations, so, for example, they too will go to sea and imagine a brave sea captain staring out at the restless water: 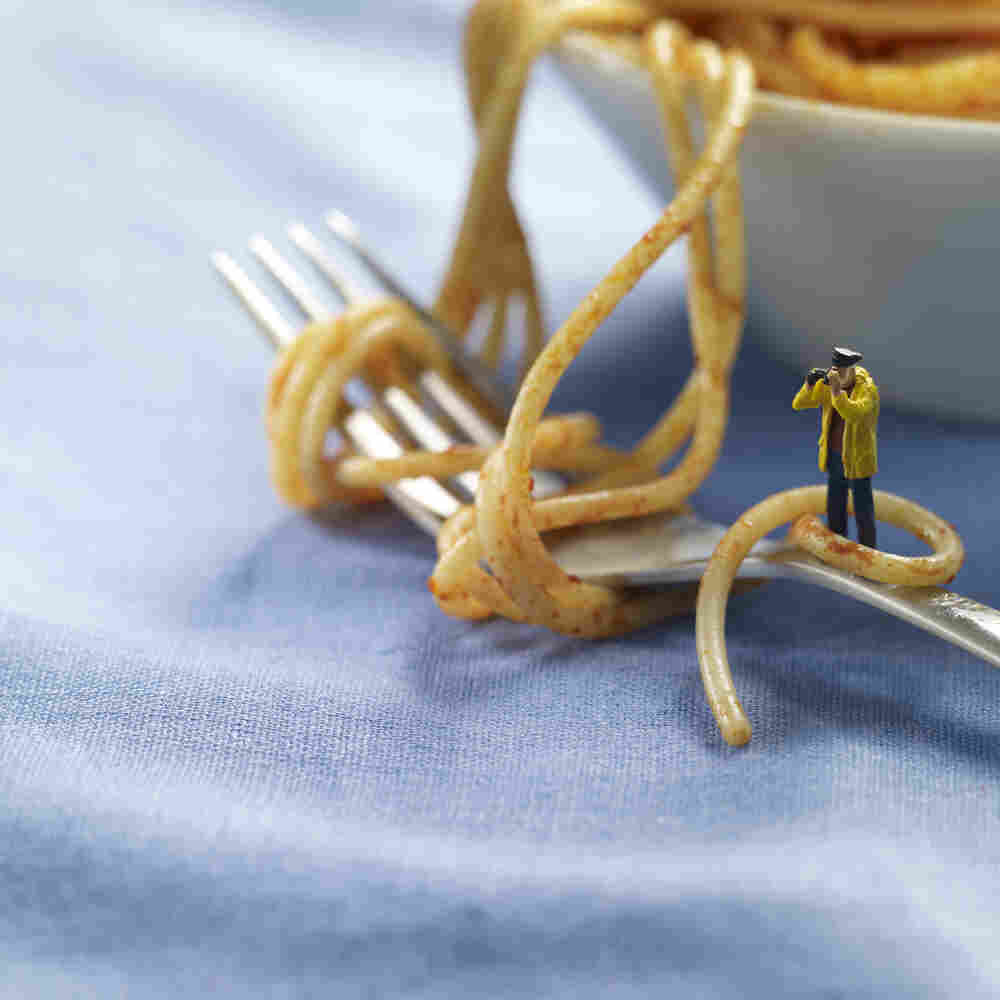 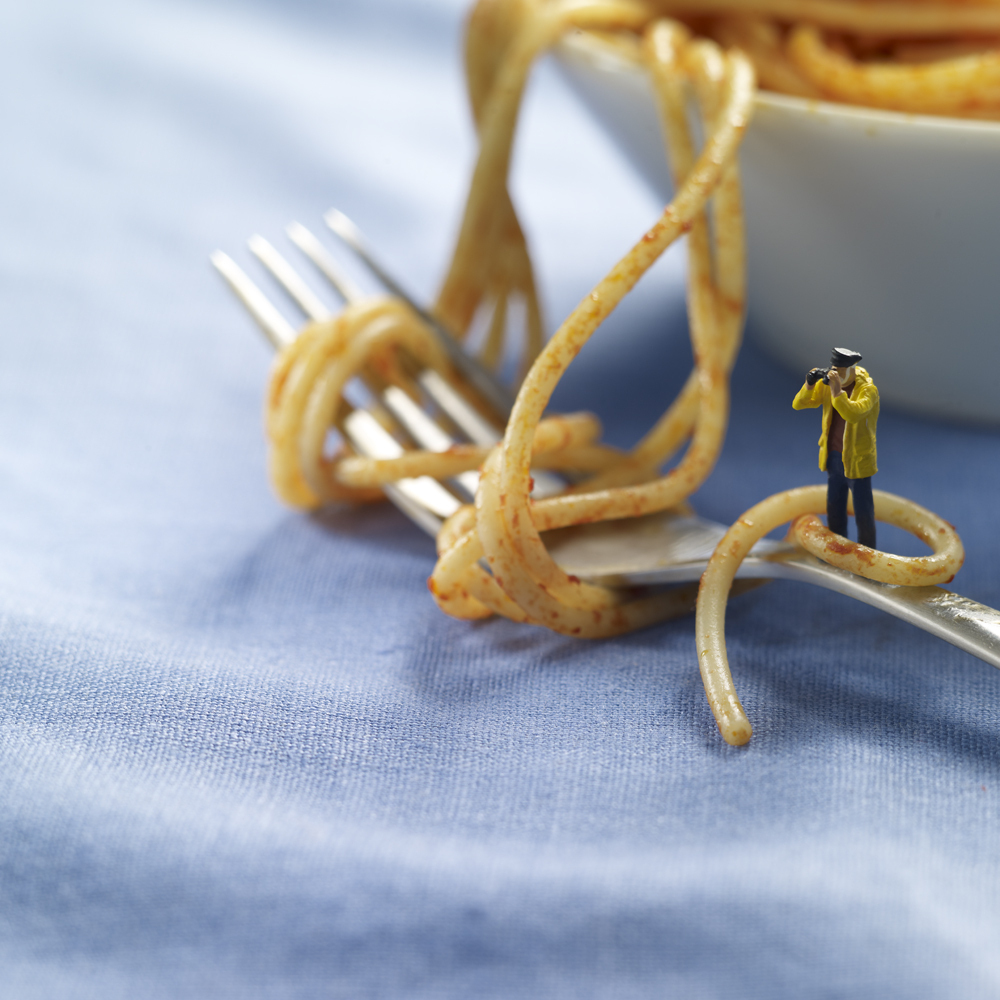 But in their version, the sea monster is scarier, meatier, with olive eyeballs: 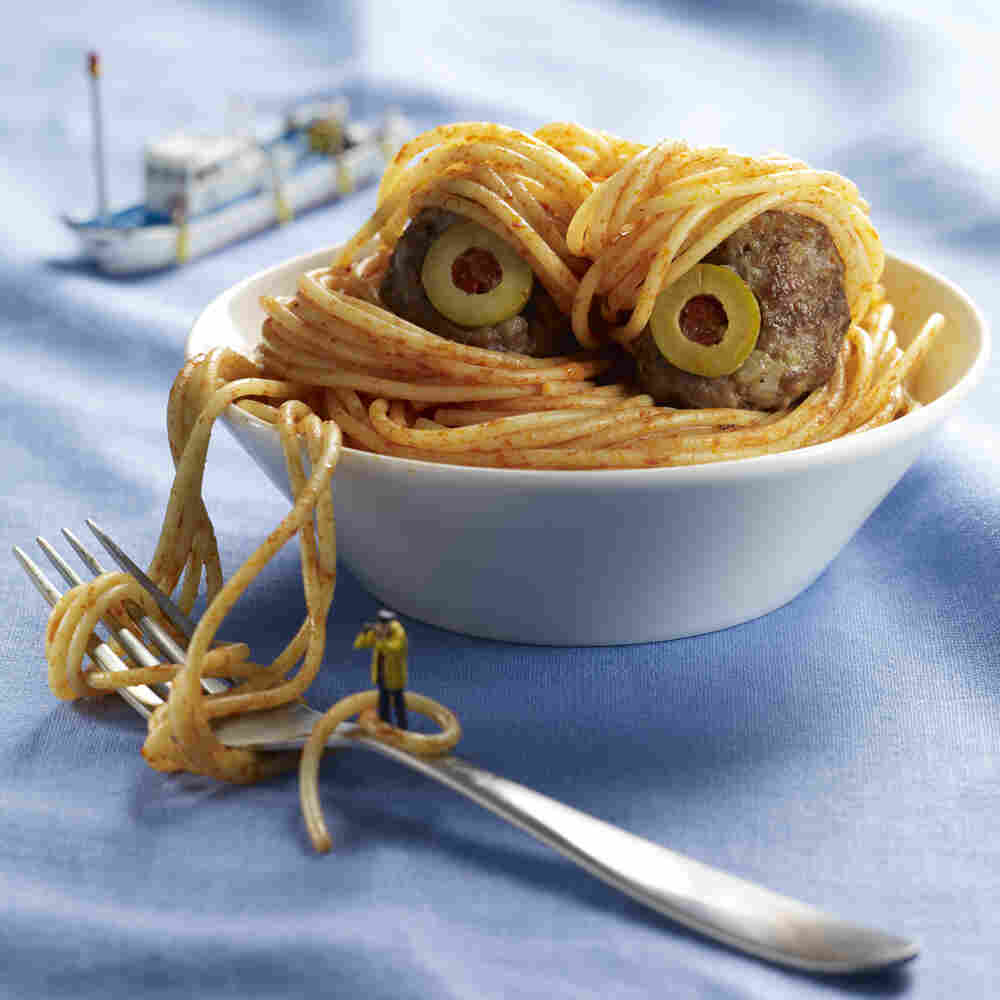 Pierre and Akiko have another advantage. They're commercial food photographers, so they think about food constantly, which makes their food fantasies much more dangerous. Peppers in their world aren't just hot. They're fiery hot... 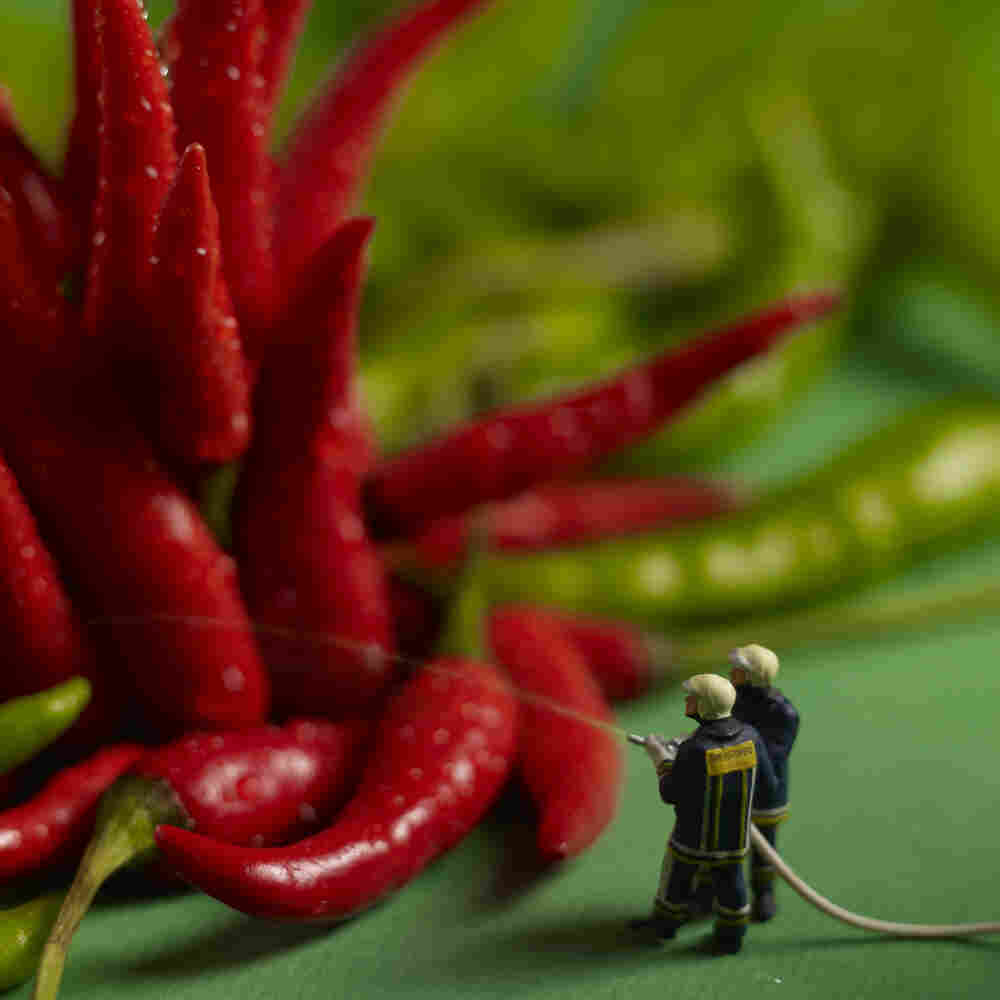 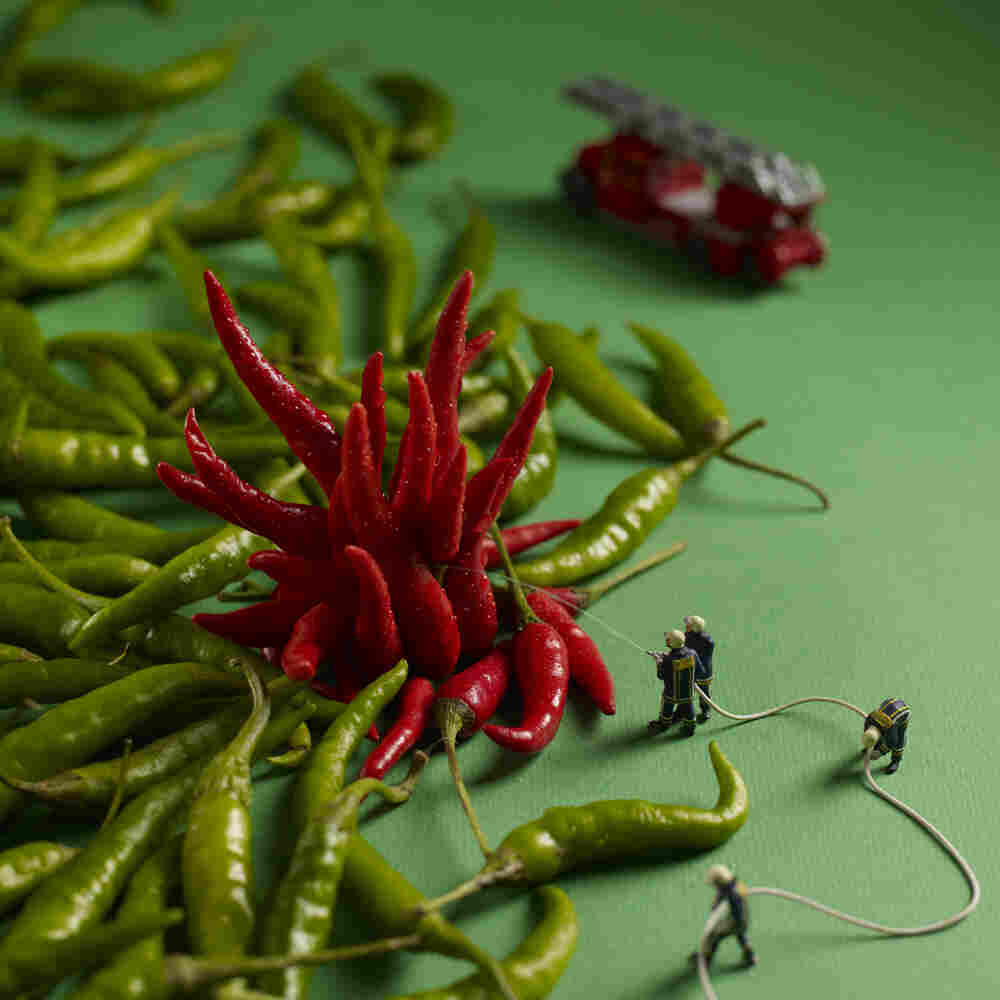 Pomegranates can blow up at any moment ... 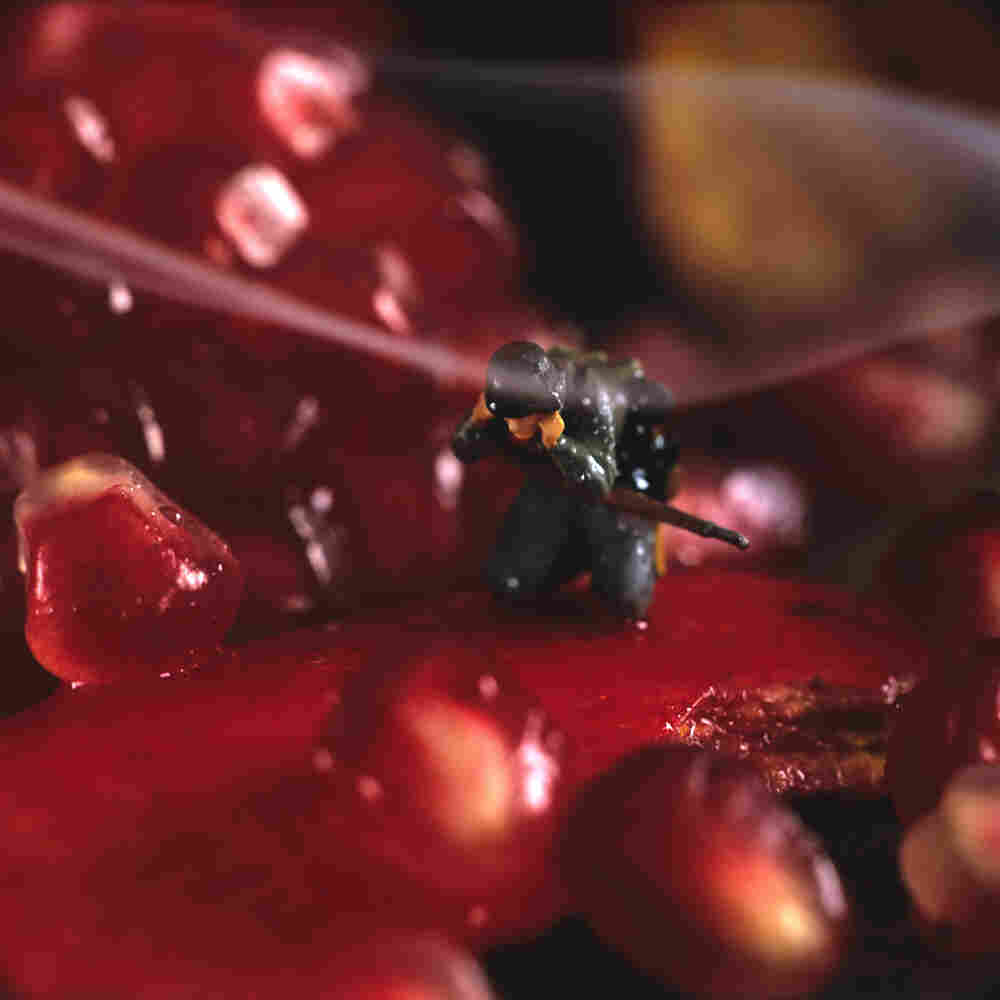 ... maybe because the French word for "pomegranate" sounds so much like the English word "grenade." 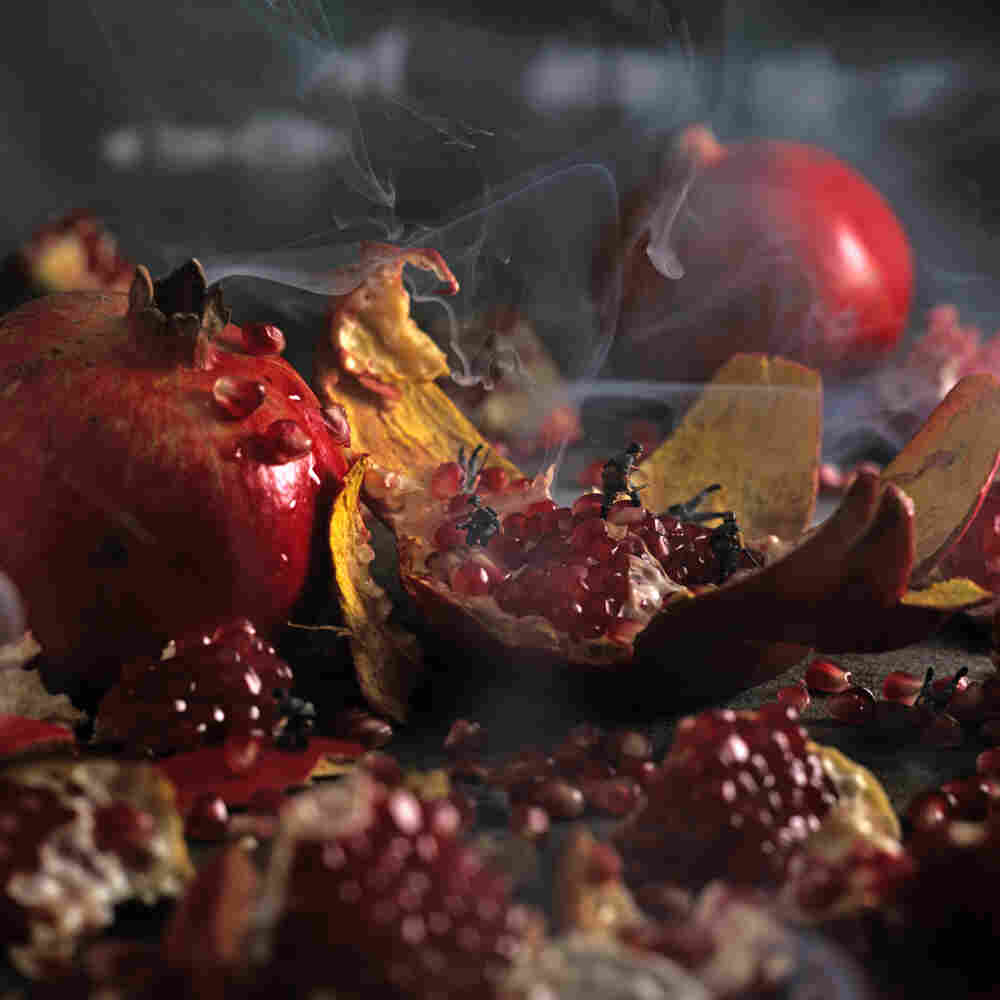 Things in their world are different. We all grew up believing that grapes dry in the sun to become raisins. That's wrong, apparently. When we're not looking ... 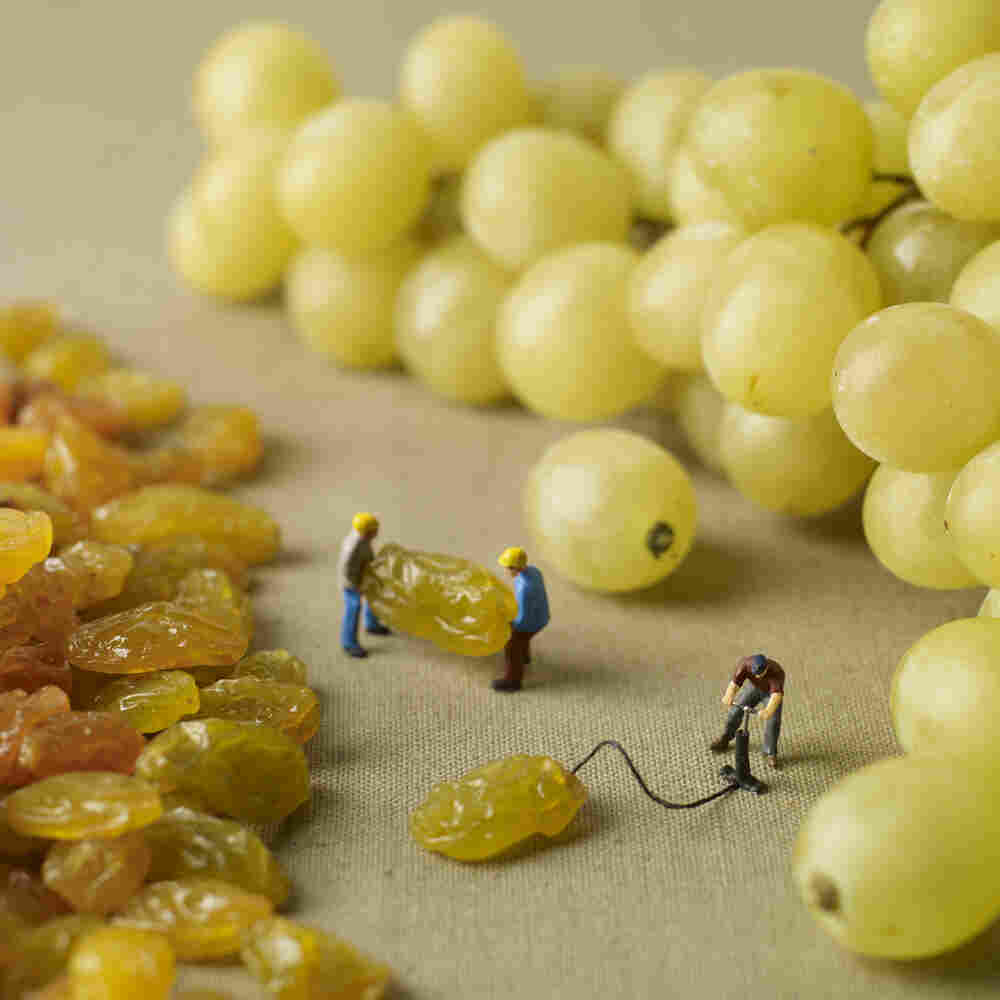 ... exactly the opposite happens: 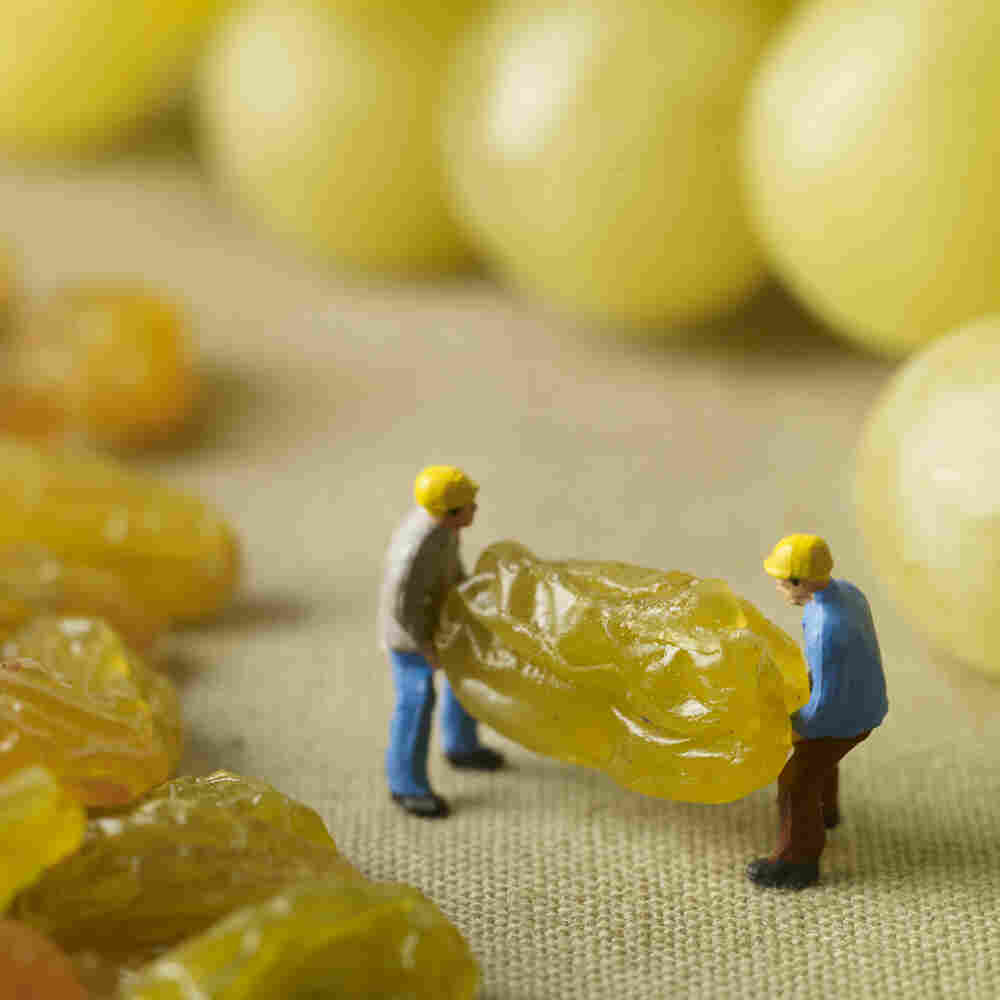 The Moon, it turns out, is not made of cheese. It's made of cinnamon (or maybe cocoa): 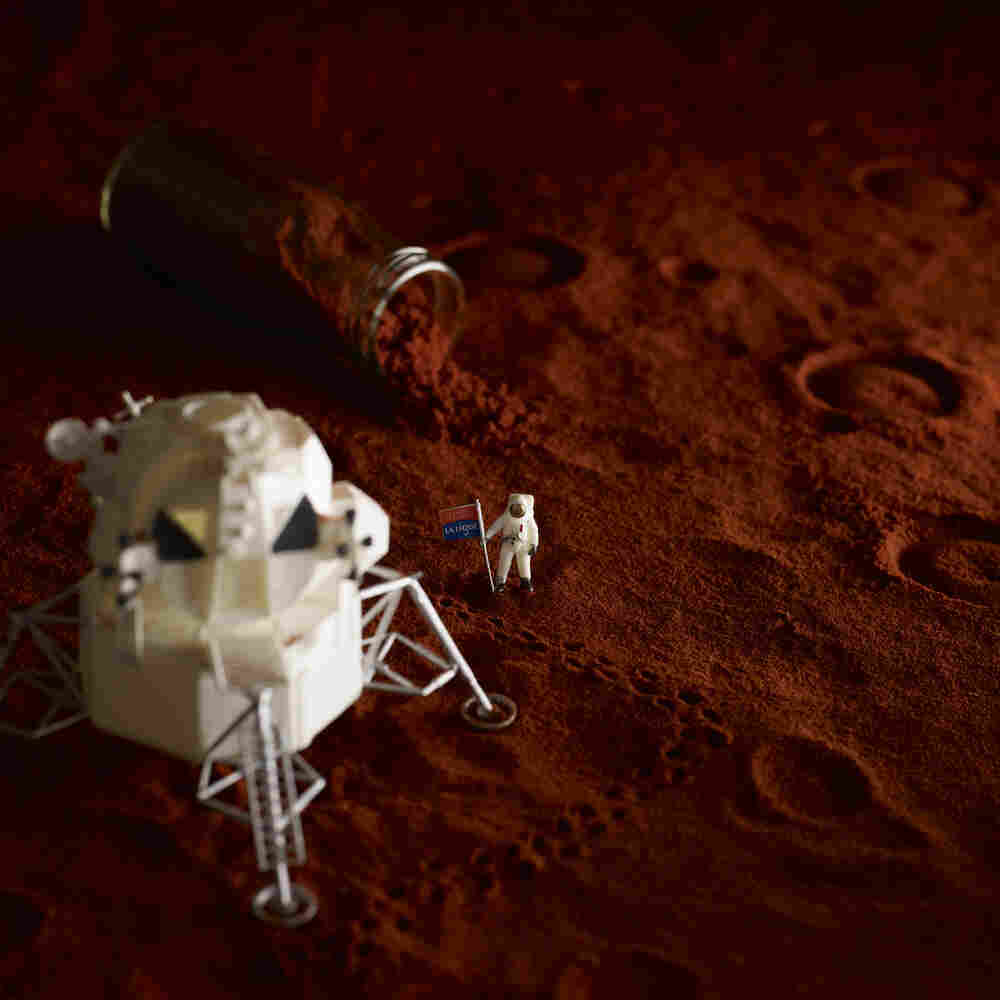 Winters, in this little world, are much like ours, only better: 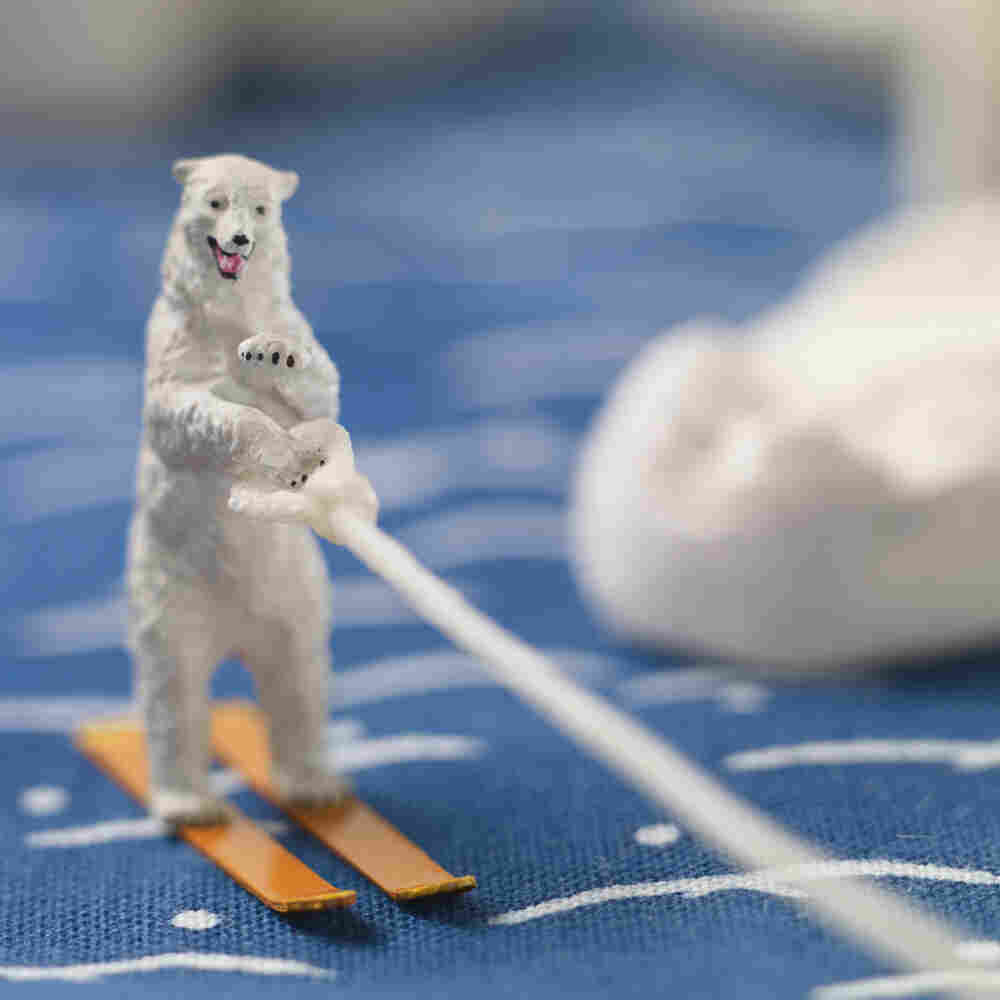 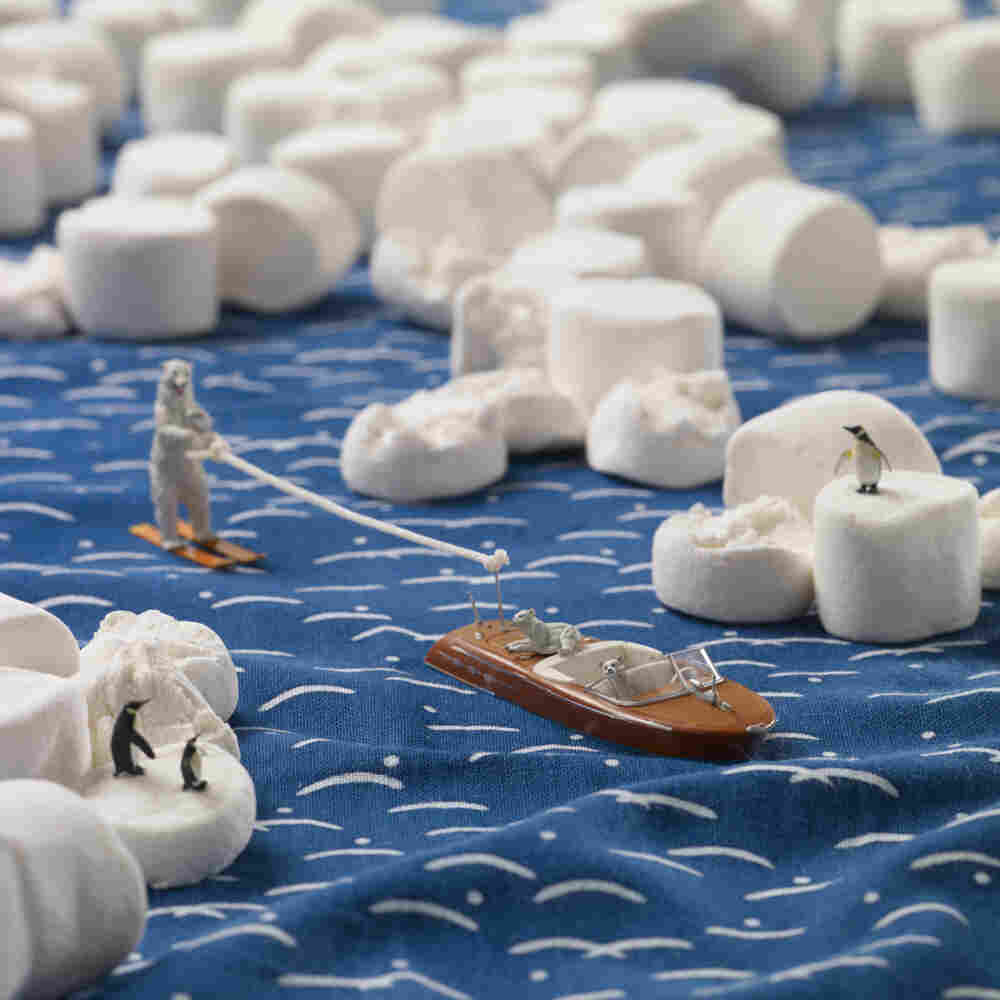 Construction workers, on the other hand, still have to get by with short lunch breaks in high places: 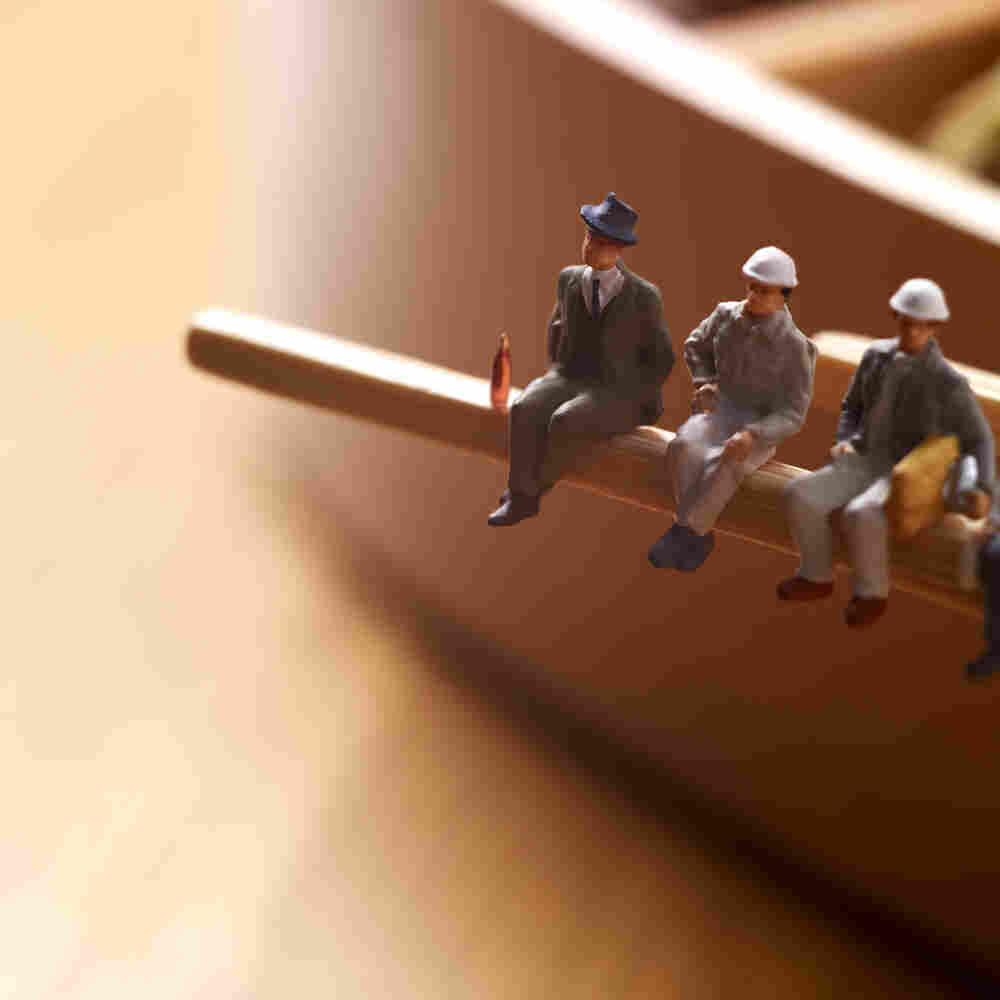 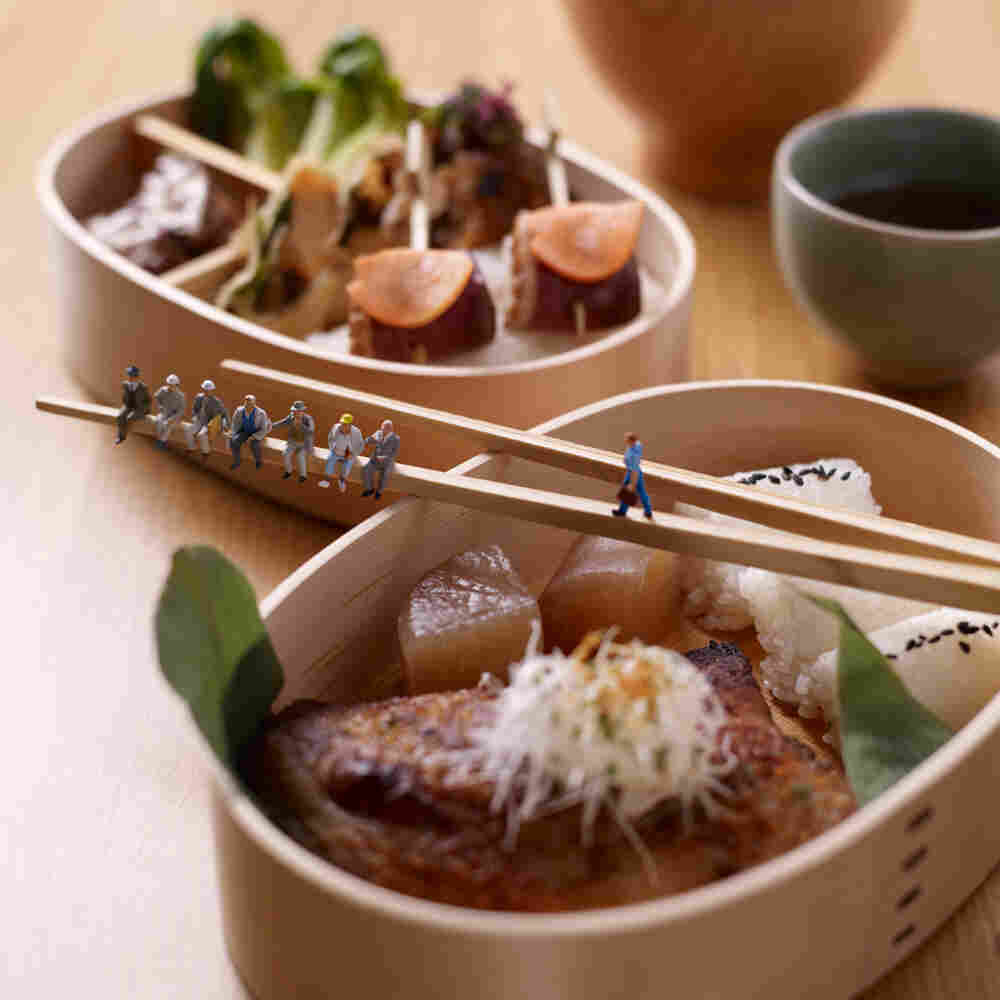 But happily, superheroes, even with their extraordinary talent for jumping, soaring and climbing ... 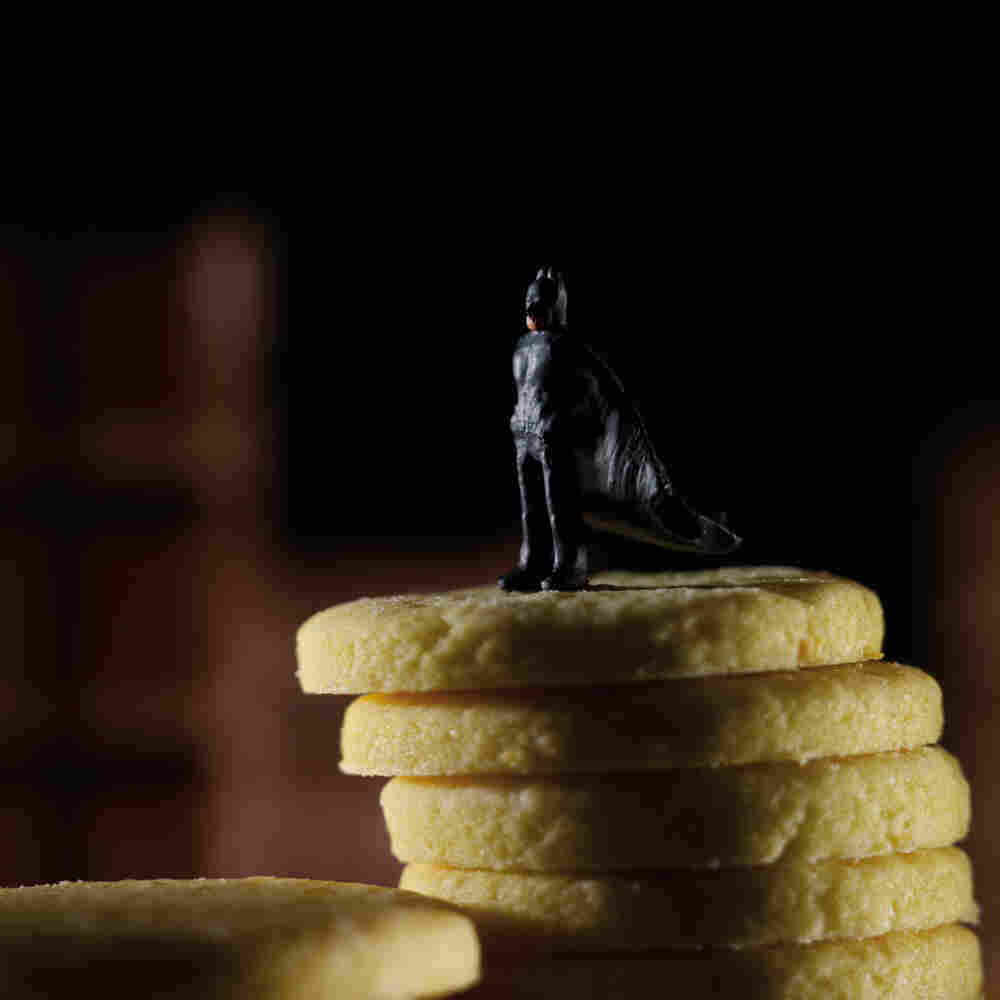 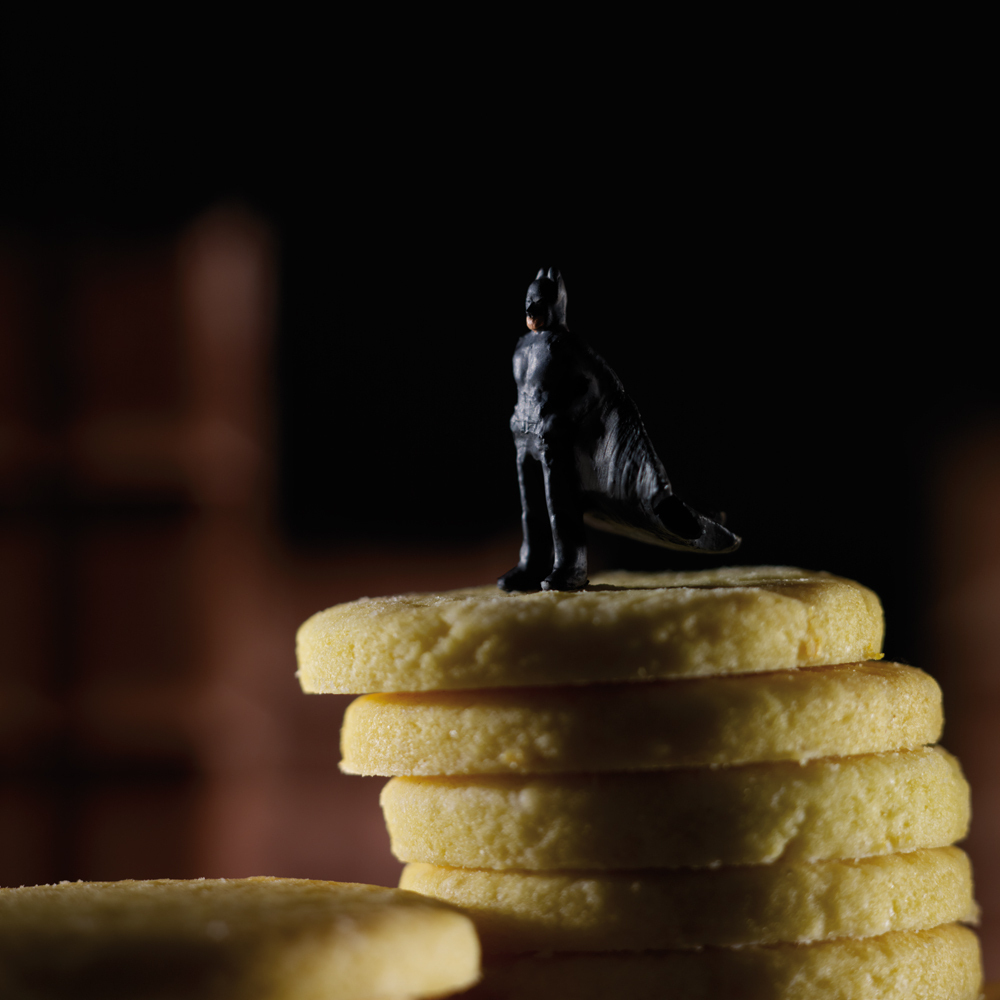 ... in this world have taken time out to think hard about electromagnetism and its possible implications for urban lighting, and have developed ... yes, the lemon-powered lamp. Thank you, Batman. We've been waiting for the LemonLamp for a long, long time. 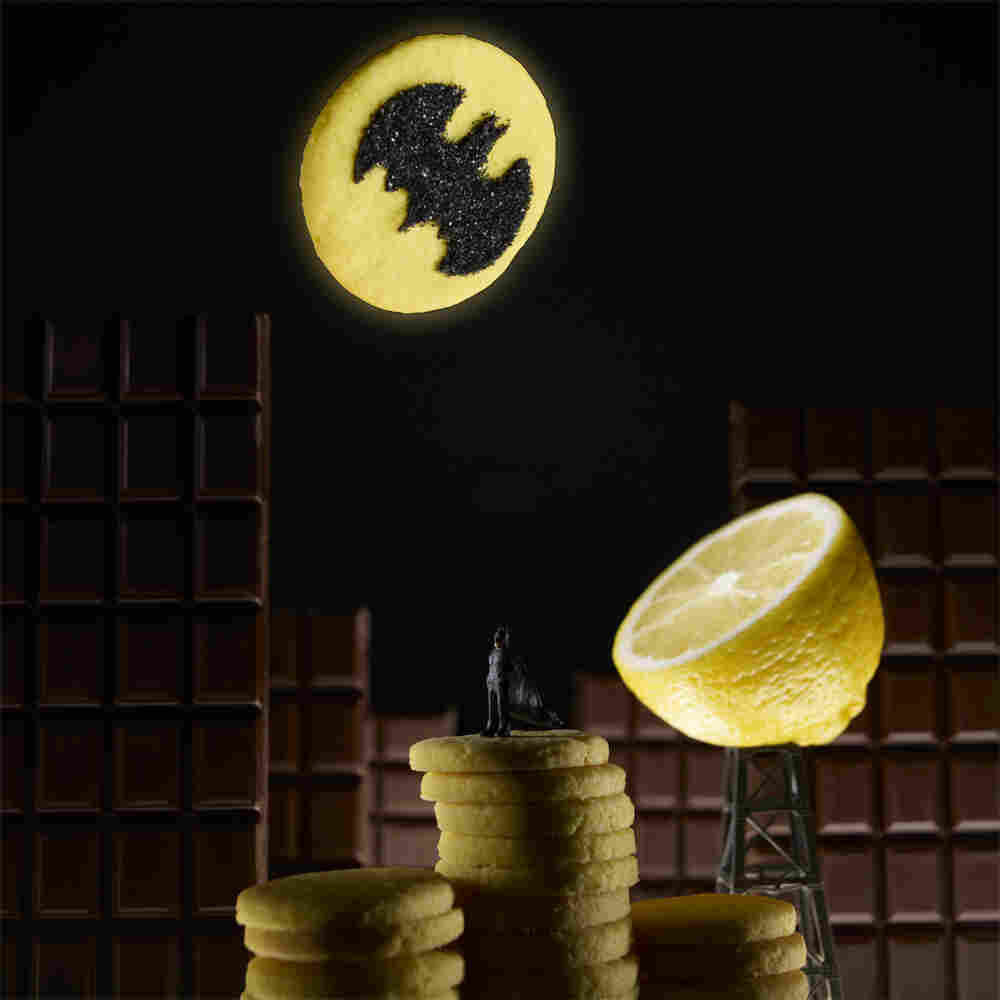 And thanks to Akiko and Pierre — who've been making these images since 2002. They now have scores and scores of them, on display here at a site they call Minimiam. They've also got a video, which takes you on a train ride through their various creations, themed "milky" and featuring a city of milk bottles, cows, and whiteness. They will be at the International Agriculture Show in Paris next month, if you are reading this (lucky you) in Paris.