Accessibility links
Thomas Jefferson Needs A Dead Moose Right Now To Defend America : Krulwich Wonders... There are no moose in America, said the French count to Thomas Jefferson. They don't exist there. Americans see a reindeer and just call it a new name, saying it's bigger. But the only thing that's big here is your American imagination. Jefferson was incensed. You are an ignoramus, he said tactfully. Then he promised to deliver an American moose to Paris. Here's what happened next.

Europeans, peering across the ocean at this new place — this America — wondered why, after 200 years, the American colonies (and now the new American nation) had produced no other men of Franklin's stature, no world class intellectuals, no military geniuses, no great poets or artists. There was something "off" about America, they thought, something not quite right. 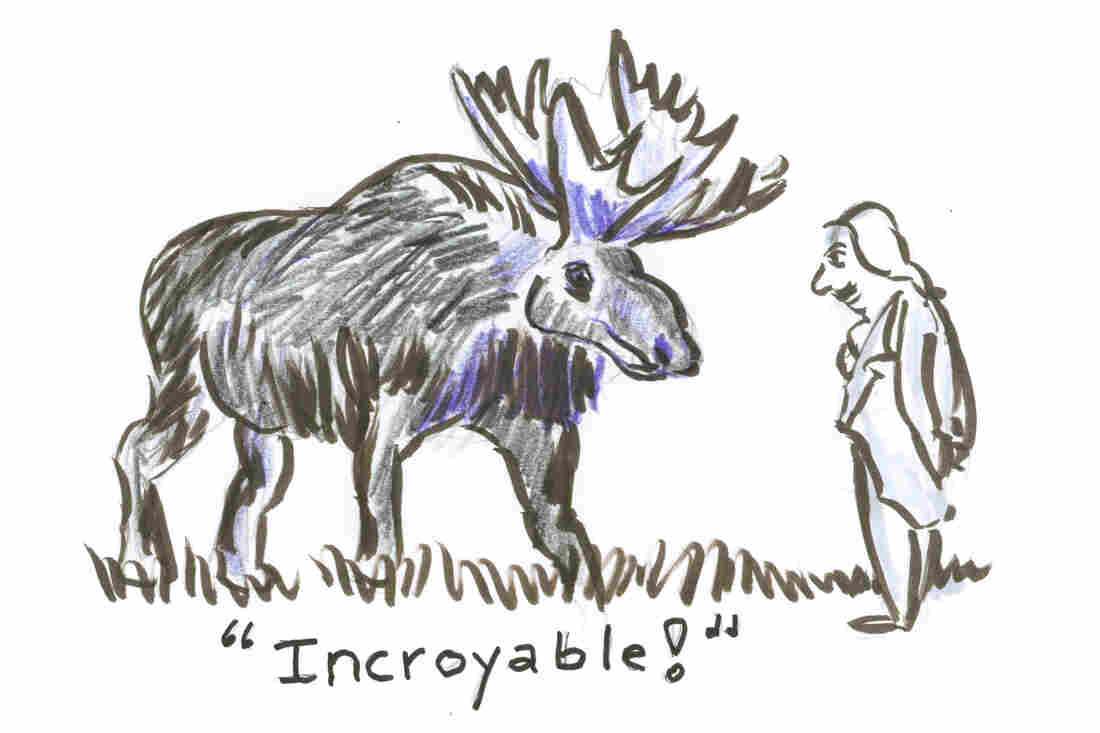 America Is A Swamp – That's The Problem

A French nobleman, Count Georges-Louis Leclerc Buffon, had an explanation. He was a great Parisian intellectual, a writer. And though he'd never been to America, he'd read travel accounts, made notes, and decided that America's flaw was built-in, deeply environmental. The continent, he declared, was mostly swamp and had only recently lifted itself up out of the sea. It was still drying out, so anything that lived there could not compete with the drier, hardier, more bracing climate in Europe. That's why, he claimed, American animals and plants were smaller, more fragile and less diverse. His book included comparative tables cobbled together from written accounts. Life in America, he concluded, was a diminished, second-best version of Europe — a "degenerate" copy. 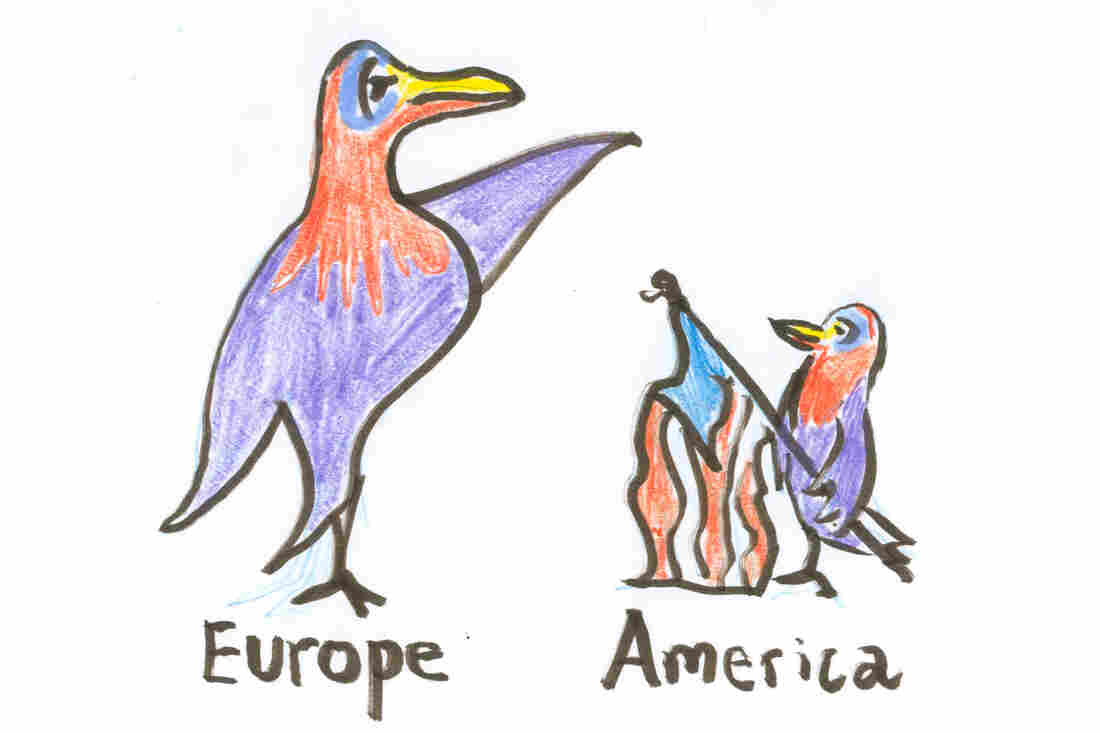 He went further. If someone were to transfer European animals or plants to America, once on the new continent the animals or plants would catch whatever was in the poor American air and regress to a pitiable, less than virile size. Which is why, he said rather Frenchily, American lamb doesn't taste nearly as good as French lamb.

If this sounds silly to you today, it wasn't at all silly in the 1780s. Count Buffon had lots of readers who inevitably enlarged on his theme. And, says Jon Mooallem, in his new book, Wild Ones, it was said in Paris "that Europeans who immigrated [to North America] would have inferior kids — that their bloodlines would degenerate just like the livestock's." 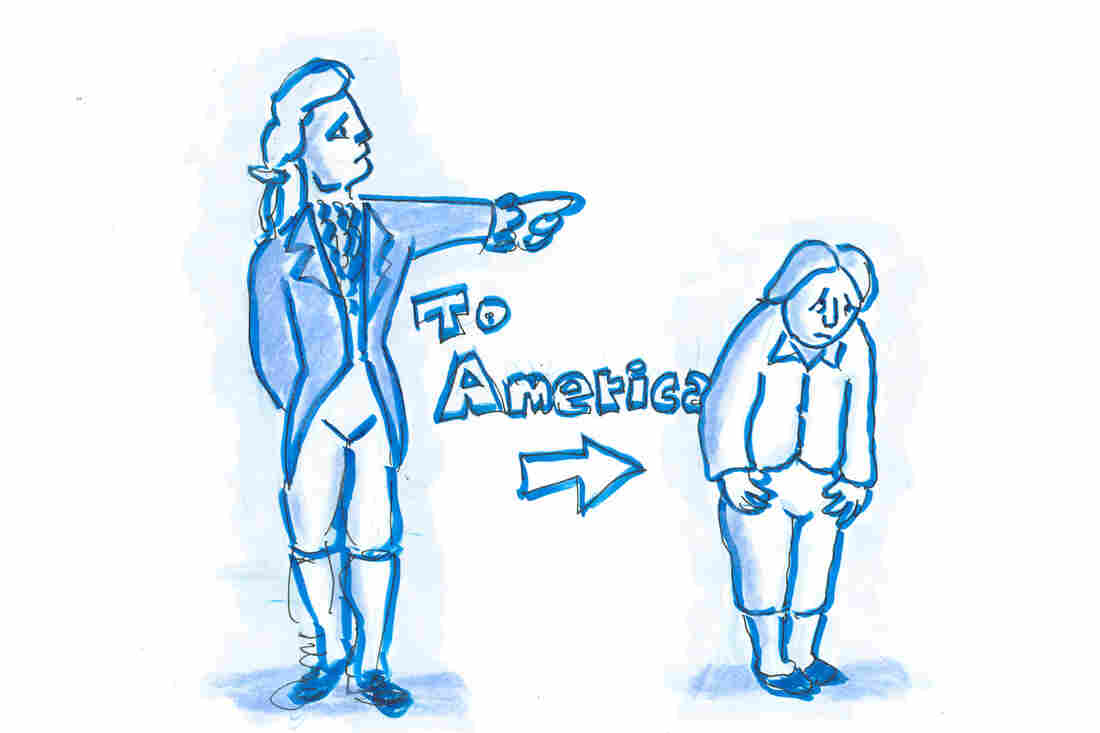 These were dangerous notions. America's standing — its appeal to potential immigrants — was being threatened, its potential for greatness questioned. The new U.S. ambassador in Paris, Thomas Jefferson, decided to pounce on Buffon — contradict him with hard evidence of American bigness.

Show Me Some Bigness

So, from his residence in Paris, Jefferson wrote his colleagues — Franklin, Madison, and others — asking them to go out and measure American animals, so he could create his own data set. As biologist Lee Alan Dugatkin describes it in his book, Mr. Jefferson and the Giant Moose, the Founding Fathers quickly responded. Madison sent Jefferson a precise description of a local Virginian weasel, measuring all the parts — down to the "distance between the anus and the vulva."

Jefferson put all these measurements into a table, and published it years later in his Notes on the State of Virginia, comparing a 410-pound bear from America to Europe's 153.7-pound version, America's 12-pound otter to Europe's 8.9-pounder. Mooallem describes Jefferson as a man obsessed. He had to prove Buffon wrong, and (this being an Enlightened Age) he wanted to prove it scientifically — by measuring, describing and building his argument.

Dinner And The Moose

The two men met in the 1780s at Buffon's home in Paris, and it was ... well, an upsy/downsy evening. Jefferson arrived armed with data, ready for battle. But Buffon one-upped him, plopping a new manuscript into his hands and announcing, "When Mr. Jefferson shall have read this, he will be perfectly satisfied that I am right." That move diplomatically shushed the American guest. He had to read the thing, which presumably postponed the argument until — during dinner — somebody mentioned a moose.

There are lots of moose in North America. In Europe, they're usually called elk. Count Buffon decided that animals that size couldn't exist in such a diminished environment. He figured some local must have seen a reindeer and morphed it into a grandly oversized, cartoon animal with big antlers.

Jefferson begged to differ. More than differ, he told Buffon that a reindeer is pitiable next to an American moose. As he recounted the conversation later, he told the count, "the rein deer could walk under the belly of our moose."

Buffon apparently scoffed. Jefferson left that dinner determined to find a moose and deliver it — skin, antlers and all — straight to Buffon's chichi house. As Mooallem describes it, "Jefferson started issuing a flurry of letters home, pleading for someone in America, anyone, to kill and stuff the largest moose he could find and ship it to him in France."

Send Me A Moose, Quick. Make It Big

The moose, Mooallem goes on, "became a fixation." Dugatkin writes that for the better part of a year "in the midst of correspondence with James Monroe, George Washington, John Adams and Benjamin Franklin over urgent matters of state, Jefferson found time repeatedly to write to his colleagues — particularly those who liked to hunt — all but begging them to send him a moose."

The governor of New Hampshire found one. It was shot 20 miles from the nearest road, had to be dragged through the snow for 14 days. And when it was mounted for shipment, its skin had flaked, its carcass decayed, its meat putrified, its antlers vanished. So the governor included alternate sets of deer, elk and caribou antlers "for Jefferson to affix to the head or mix and match as he saw fit." 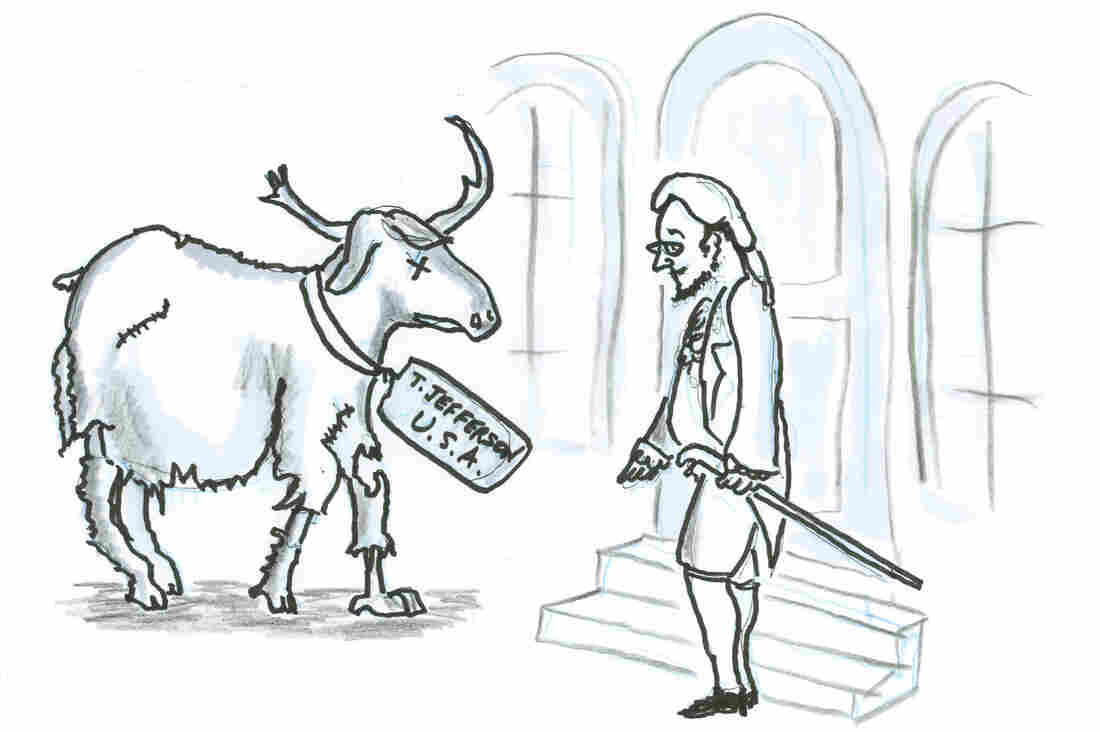 By the time the moose arrived a year later in Paris, it was, says Mooallem, "more than a little pathetic."

OK, This Moose Is Not Typical

But Jefferson delivered it anyway. He apologized for its appearance, told Buffon that on the day it died its fur was full and glorious. And though it was wearing substitute antlers, Buffon should imagine them bigger — because they were. "I have certainly seen of them which would have weighed five or six times as much," Jefferson wrote.

Jefferson's moose campaign, Mooallem says, may seem like the story of a guy who doesn't know when to stop, who pushes too hard, like "an early American George Costanza" (from Seinfeld) who never quite convinces and can never calm down.

Yes, Jefferson may have had a little Costanza in him, but this tale also describes a turning point, a new way of thinking about the American wilderness. Instead of being afraid of all those wild bears hiding in the woods, these young American statesmen decided to celebrate the raw American wilderness and think of their country "as a land full of big and beautiful things; and Americans as a people tied to nature's rhythms — and hunting, rather than sitting in European parlors." This is where the seeds of Kit Carson, Davy Crockett and Buffalo Bill are first planted. This is the start.

Meanwhile, what happened when the moose arrived at the Buffon household? It did arrive. We know that. Was Buffon startled? Did he laugh or fall back in surprise? As Mooallem writes: "It is impossible to know what impact Jefferson's moose had on Buffon's thinking. Not long after receiving it, the Count died."

I imagine him dying from an acute attack of awesome mooseness — but hey, that's just a guess.

Writer (and sometime Radiolab contributor) Jon Mooallem gets interested in how people have come to think about animals in his short meditation on bears, birds and butterflies. That's where I found the Jefferson story. The book's full title is Wild Ones: A Sometimes Dismaying, Weirdly Reassuring Story About Looking At People Looking at Animals in America.

Read an excerpt of Wild Ones

Read an excerpt of Mr. Jefferson and the Giant Moose