Accessibility links
You're The Last. The Very Last One. Now What Happens? : Krulwich Wonders... When "Benjamin," the world's last captive Tasmanian Tiger, died in 1936, a 23-million-year run of marsupial (pouch-bearing), doglike animals very likely disappeared from the planet. But before Benjy went, he had his revenge on the humans who hunted his kind to extinction.

What happens if you are the last (the very, very last) of your species and you die — and humans notice?

We live, increasingly, at a time when extinctions are recorded, remembered, and the last animal (or plant) in its line, by virtue of its being last, becomes a kind of celebrity. Its finality becomes a thing to honor. If it's an animal, its body can be stuffed, embalmed, and, like Lenin in Moscow, displayed for all to see. One would think that, as modern celebrities, the Last Ones would be celebrated, mourned, fussed over. But, curiously, that's not what happens. Consider these three cases:

The last known auk — a plump, penguinlike seagoing bird — had a reserved seat on an Icelandair flight from London to Reykjavik in 1971. It was placed next to the director of the Icelandic Institute of Natural History — in its own seat. Which is curious, because the bird was dead. It had been dead for 150 years, having been killed somewhere in Iceland in 1821 for a Danish nobleman who wanted a great auk in his taxidermy collection. 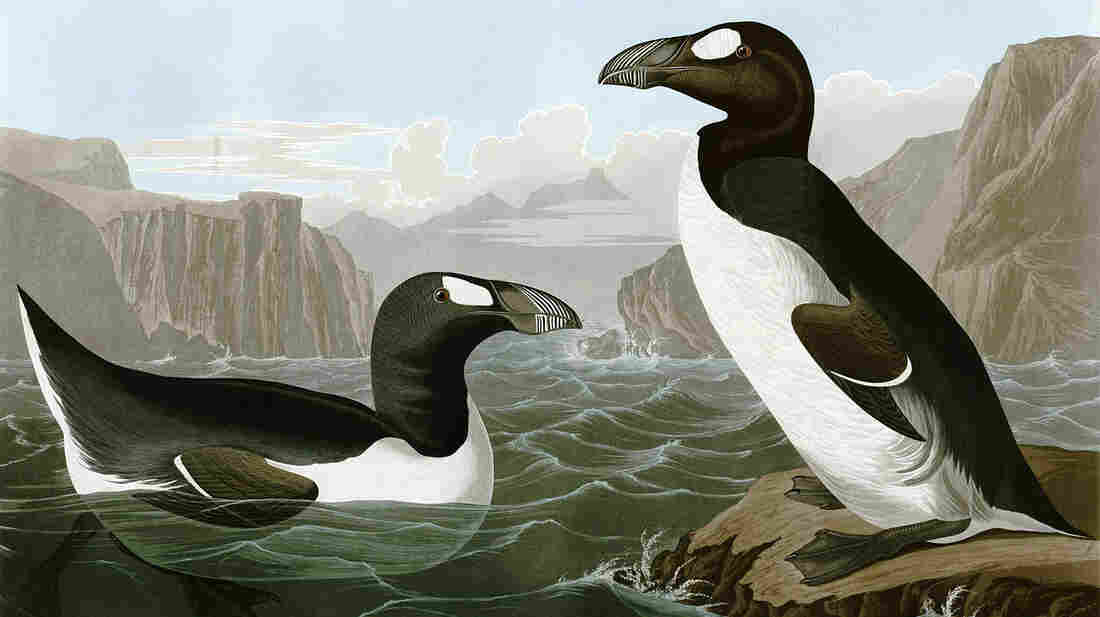 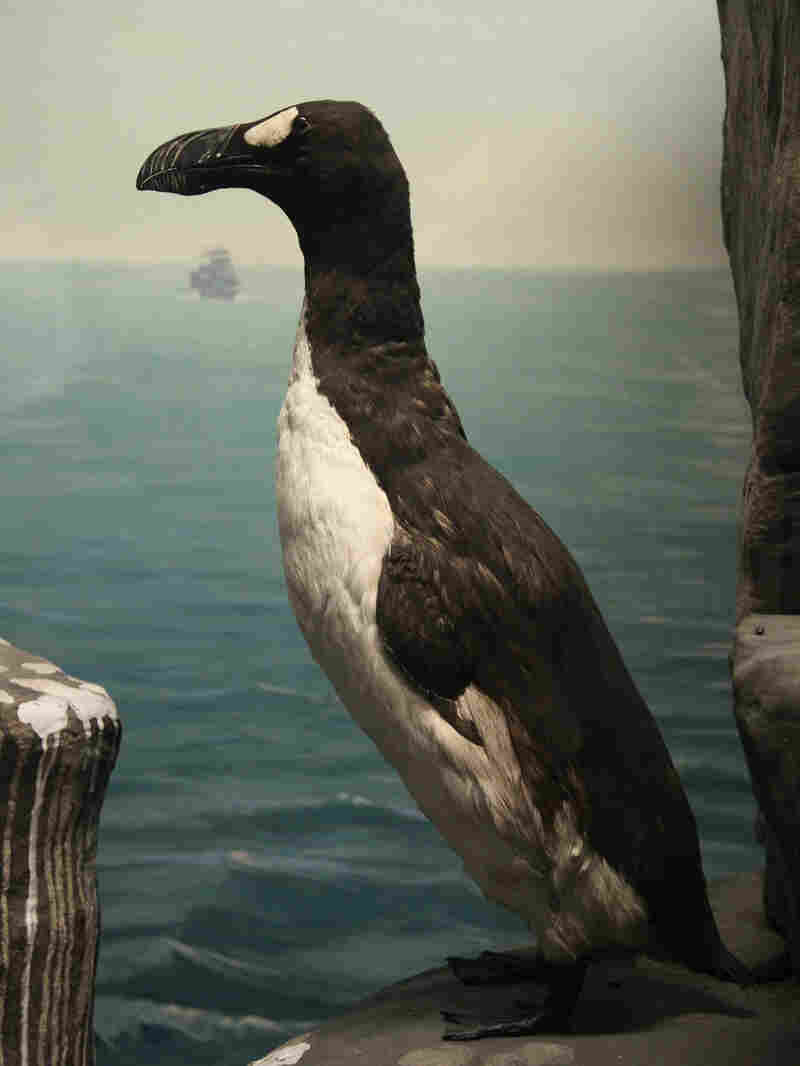 Once upon a time, millions of auks had waddled on thousands of shores and islands from Norway to Florida; but once it became clear that Count Frederik Christian Raben's auk was the last of its line, it achieved a certain ... singularity. The private families who kept it (stuffed and mounted in a case) eventually decided that it might fetch a good price at sale.

When Sotheby's announced an auk auction in 1971, Iceland's Natural History Museum decided to bring it "home." The public was asked to contribute, and within three days, writes Elizabeth Kolbert in her new book, The Sixth Extinction, "Icelanders contributed the equivalent of ten thousand British pounds to buy the auk back." The bird had become an Icelandic hero — worthy of its own seat on the plane.

So, What Happened To The Last Auk?

Where is it now? For a while the last auk was on exhibit in Reykjavik, but in 2008, after Iceland suffered a series of financial reversals, money got tight and the museum had to scratch plans for a bigger exhibit space. The auk was removed. When Kolbert went to see it, she was escorted to a backroom, a storage facility, she says, and found it "standing off by itself, in a specially made Plexiglas case. It was perched on a fake rock, next to a fake egg" — out of view, all alone.

Martha, the last (that we know of) in a long line of passenger pigeons, died at the Cincinnati Zoo in 1914, was packed in ice, sent to the Smithsonian, stuffed, mounted and exhibited, oddly enough, alongside a great auk. They shared a room dedicated to the taxidermy of extinct birds, along with an ivory-billed woodpecker and the world's last heath hen. 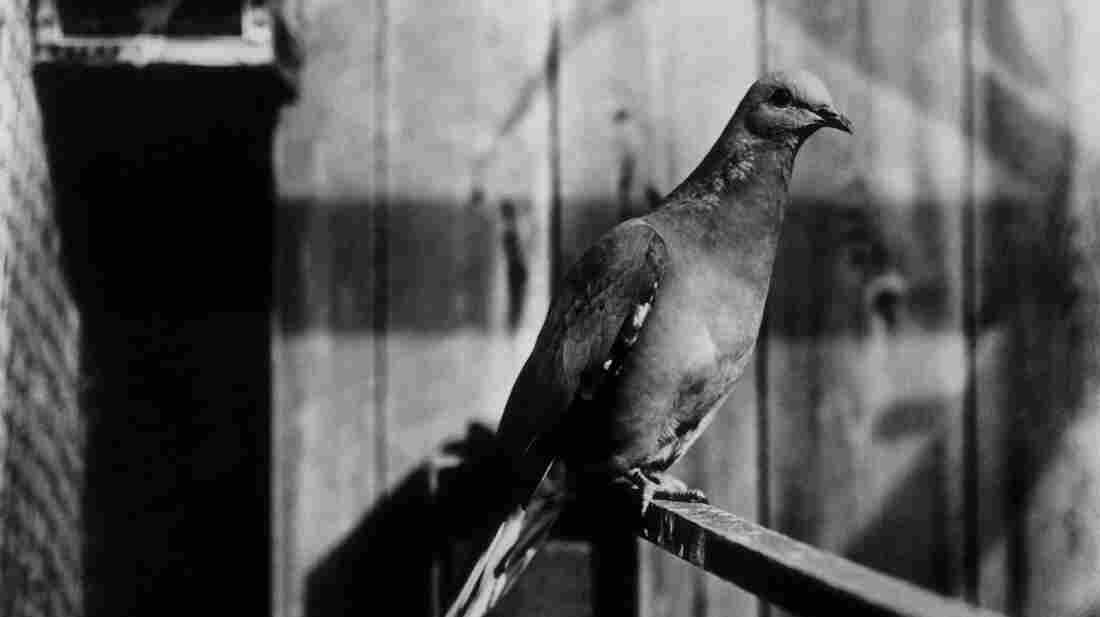 Like the last auk, the last passenger pigeon was herself a passenger. In 1966, Martha was flown to San Diego, to a science meeting of wildlife conservationists. The organizers, says writer Jon Mooallem, "just wanted to see her there, as a mascot, as they plotted ways to save the earth." Unlike the auk, she didn't get her own airplane seat. "A dedicated (American Airlines) stewardess held Martha on her lap the entire transcontinental flight," Jon writes in his book Wild Ones.

Then, some years later, the Smithsonian decided to replace the bird display with a new Hall of Mammals exhibit. The mammals went up. The birds came down.

What Happened To The Last Passenger Pigeon?

So what happened to Martha? She too, is no longer on display. Jon reports in The Wild Ones that James Dean, the Smithsonian's collection manager, was told the public wasn't interested in seeing a case of extinct birds, so, writes Jon, "Martha is now kept on a Styrofoam block in a metal cabinet labeled Z-11-C, a vast climate controlled warehouse full of metal cabinets, reminiscent of that last scene of Raiders of the Lost Ark."

Jon says he went to see her there, asked that the storage cabinet be opened; and when Mr. Dean took out the world's last passenger pigeon, as he handed it to Jon, he said, quietly, "Poor Martha." 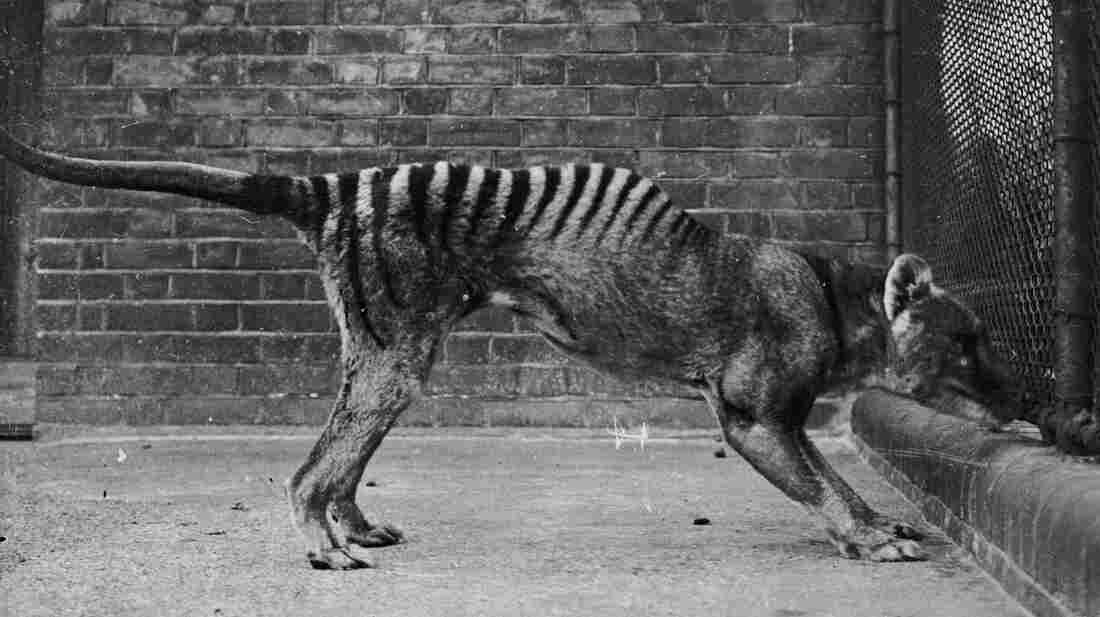 Tasmanian tigers weren't tigers. They were pouch-bearing (like kangaroos), doglike animals with tiger stripes on their backs. The last one was captured in 1933, we think, in southwestern Tasmania, south of Australia, taken to a zoo, and put in a cage. Here it is, three years before it died, in a 42-second film. As you'll see, it shows not the slightest sign of winking out: It's alert, very present, pacing about:

The footage, you'll notice, opens with what appears to be a yawn. That's not a real yawn, says Cameron Campbell, curator of an online site about Tasmanian tigers, the Thylacine Museum. It is a "threat-yawn response," Cameron says, a Tasmanian tiger's way of showing fear; the "yawn" is meant to be menacing. When zoo curator Arthur Reid and cameraman/zoologist David Fleay entered the enclosure with an array of equipment and began setting up, the animal at one point got behind Fleay, crept close, and then — "in the species' most memorable final act," as reporter J.B. Mackinnon writes in his book The Once and Future World, "it bit Fleay on the ass."

This is a very short film.

What Happened to The Last Tasmanian Tiger?

Benjamin (that's what "he" was called; his sex is still being debated) spent his final days in the Hobart zoo in a wire-topped cage, exposed to the weather, protected by a solitary tree that was not yet in leaf. It was early spring in Australia, and the weather very changeable, writes MacKinnon: "[N]ighttime temperatures dropped below freezing and soared as high as 108 degrees Fahrenheit by day. One witness reported hearing the [tiger's] ululating cry of distress. It died in the night on Sept. 7, 1936."

And the body? This time, this Last One was not preserved. Benjamin's corpse, says MacKinnon, "was apparently thrown away." But almost 80 years later, you can still see him on YouTube — eyes bright, pacing nervously, mouth in full yawn, with rows and rows of teeth ready to bite irritating humans — where he's been visited 1,923,071 times.