Accessibility links
Trees On The Move As Temperature Zones Shift 3.8 Feet A Day : Krulwich Wonders... To keep pace with the present rate of temperature change, plants and animals have to migrate poleward a few feet a day, according to a team of ecologists. If they can't, they may not survive.

Trees On The Move As Temperature Zones Shift 3.8 Feet A Day

Trees On The Move As Temperature Zones Shift 3.8 Feet A Day

You are a snail. You are a plant. You like where you are. The temperature's right. It suits you. 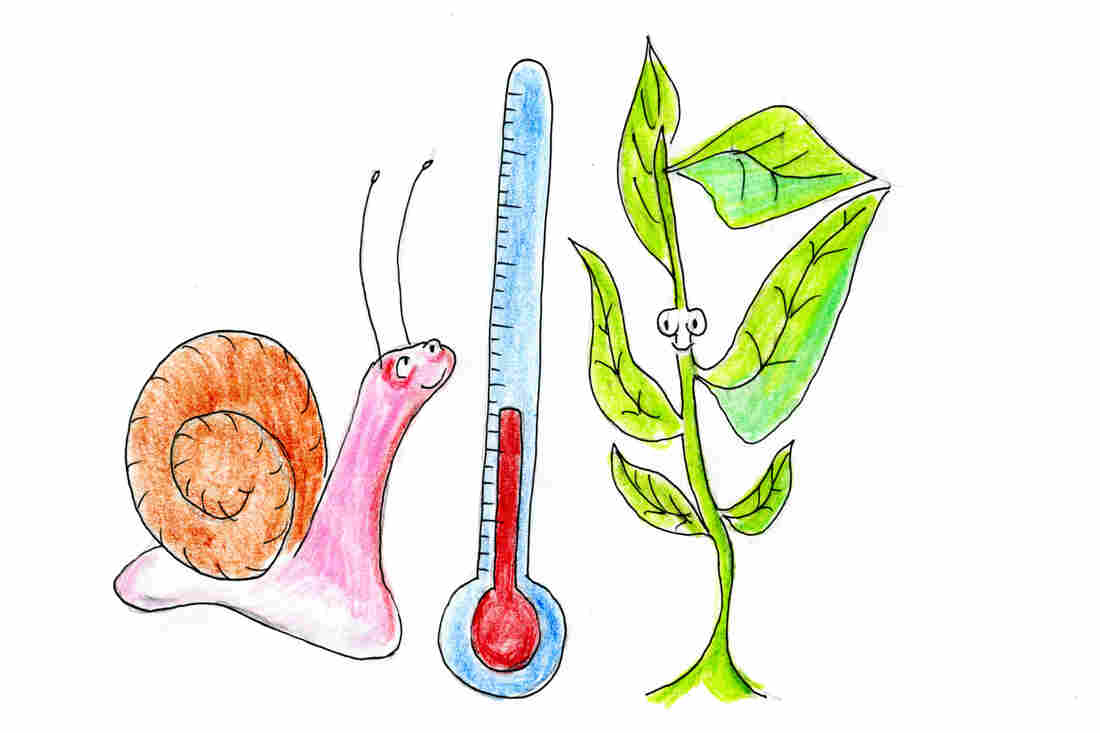 But then, gradually, over the years, it gets warmer. Not every day, of course, but on more and more days, the temperature climbs to uncomfortable highs, drying you out, making you tired, thirsty. 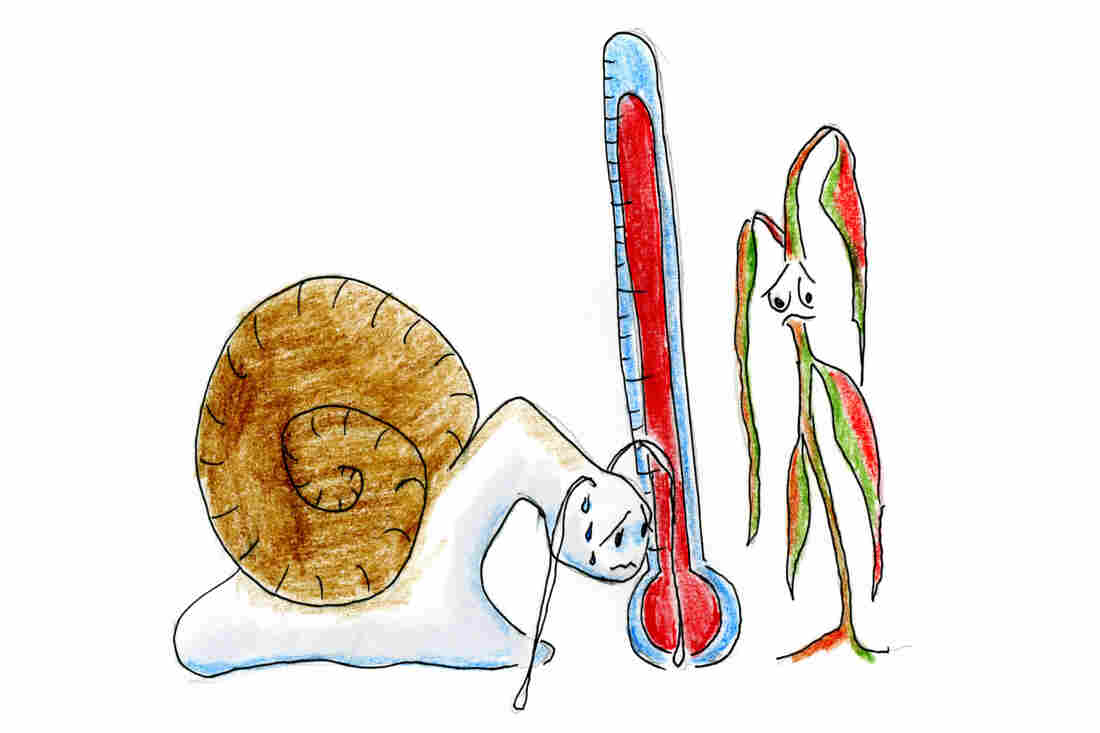 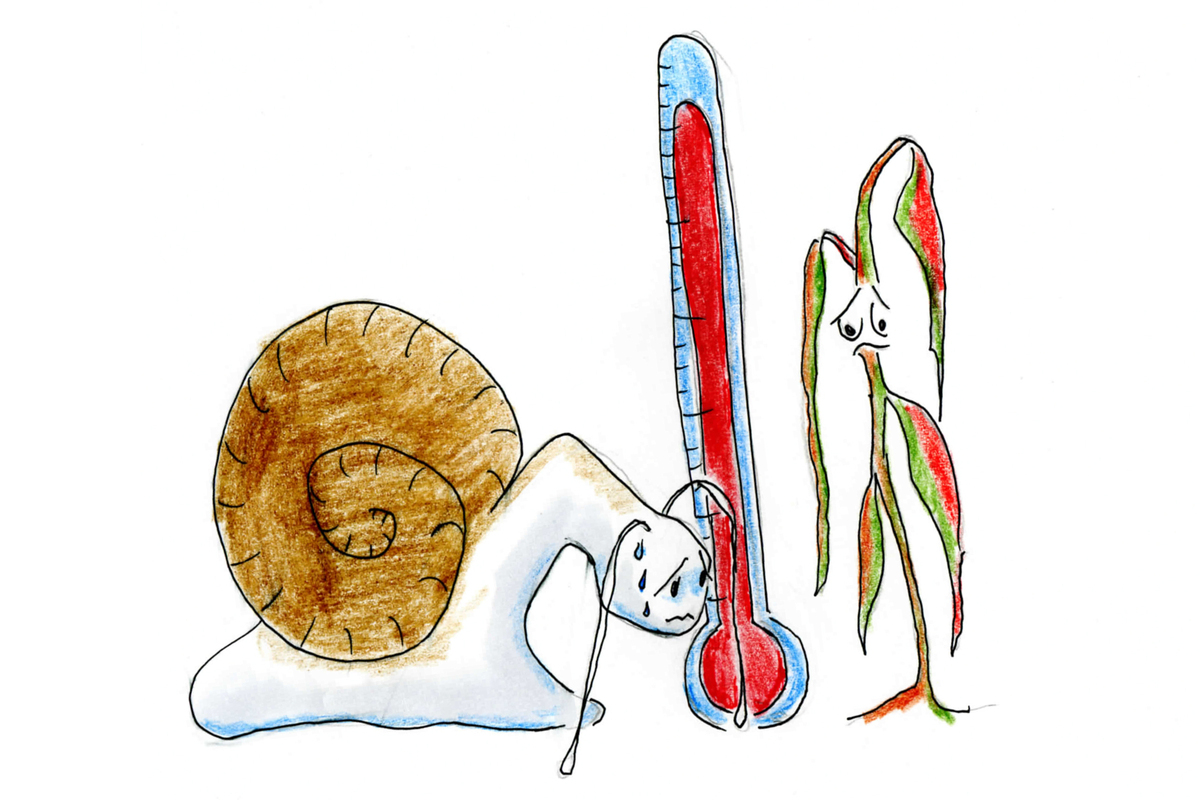 Something is not right. And though you can't know this, there's a reason: The whole planet is getting warmer, which means that temperature zones are shifting. Warmer areas are expanding, pushing cooler zones closer to the North and South Poles, so that the meadow, the forest, the tundra, the desert, the plains — wherever you live — your ecosystem is beginning to shift. Over the decades, the climate you prefer has started to migrate away from you, which raises an intriguing question: "If I'm standing in a landscape," asked Stanford ecologist Scott Loarie a few years ago, "how far do I have to travel in order to change my temperature" – to get back to the climate that suits me? Loarie, Chris Field, and their colleagues at the Carnegie Institution for Science gathered all the data they could from climate change studies in order to measure "temperature velocity," or, as Scott put it in a podcast at the time, "How fast is temperature change sweeping across the Earth's surface?"

In 2009, they came up with an answer, published in the science journal, Nature. As a global average, they said, temperatures are changing at a rate of 0.42 kilometers — or roughly, a quarter mile a year, which means that if you are standing on a patch of earth, climate zones are moving at a rate (on average) of about 3.8 feet every day. 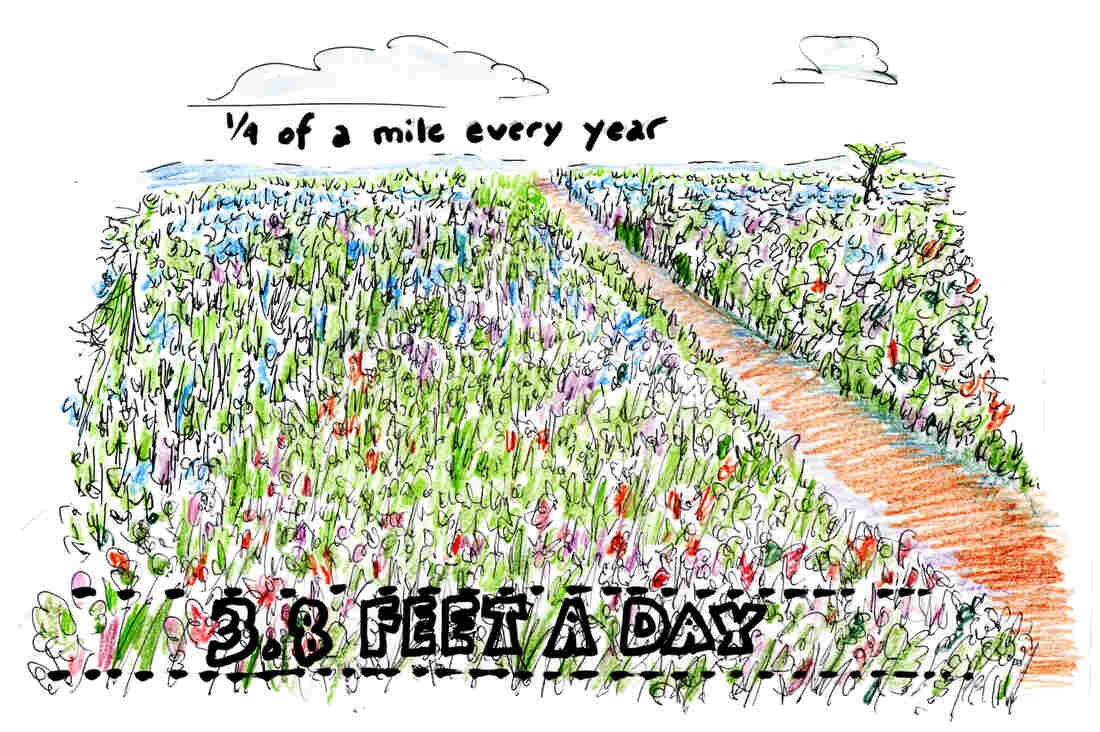 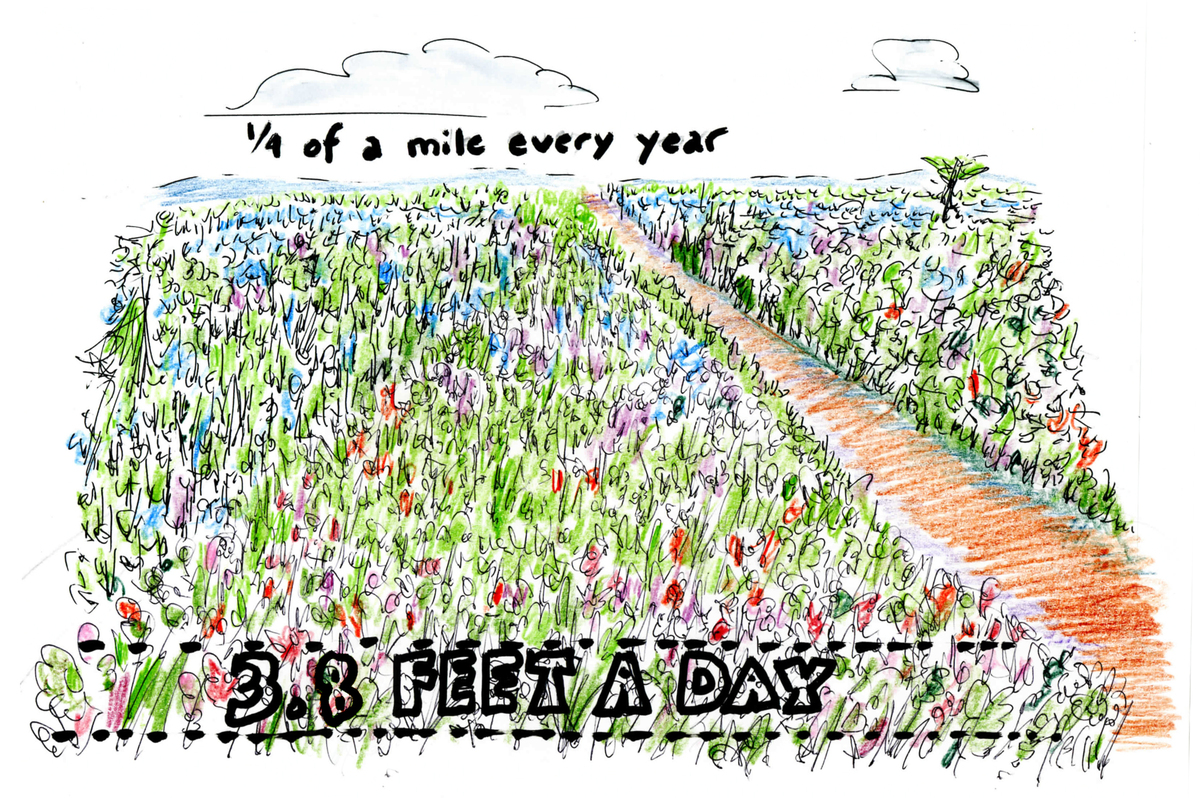 Think about this for a moment. For birds, butterflies, bears — critters with legs and wings — catching up with your old climate (as it moves away from you at 3.8 feet a day) seems very doable. If you're a lot smaller — a snail, a beetle — it's harder. And if you can only wiggle, like an earthworm, it's even rougher. 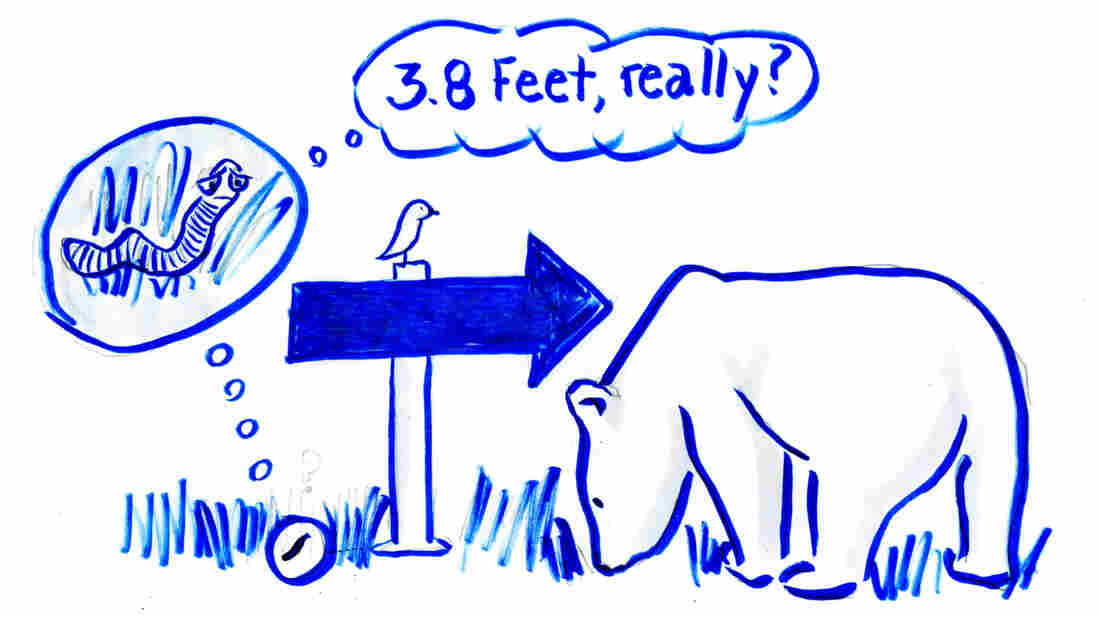 But, in general, a 3.8-feet-a-day rate seems hard, but not impossible. Remember, however: This is an average, and averages can mask very different underlying rates. Everybody knows temperatures change very fast when you are climbing a mountain. Mountains are change-friendly. To get a little cooler, all you have to do is climb a small distance. But to get a degree or two cooler on flatter land (on the plains, grasslands, in a rural area), you may need to travel a half mile or more every year to keep your climate constant. For a beetle, a snail, that's a hike. And if there are highways, fences, shopping malls in your way, the trip may be impossible.

Even mountains have their problems. The higher you go, the narrower it gets. Some critters can move up, but not everybody. It'll get too crowded. 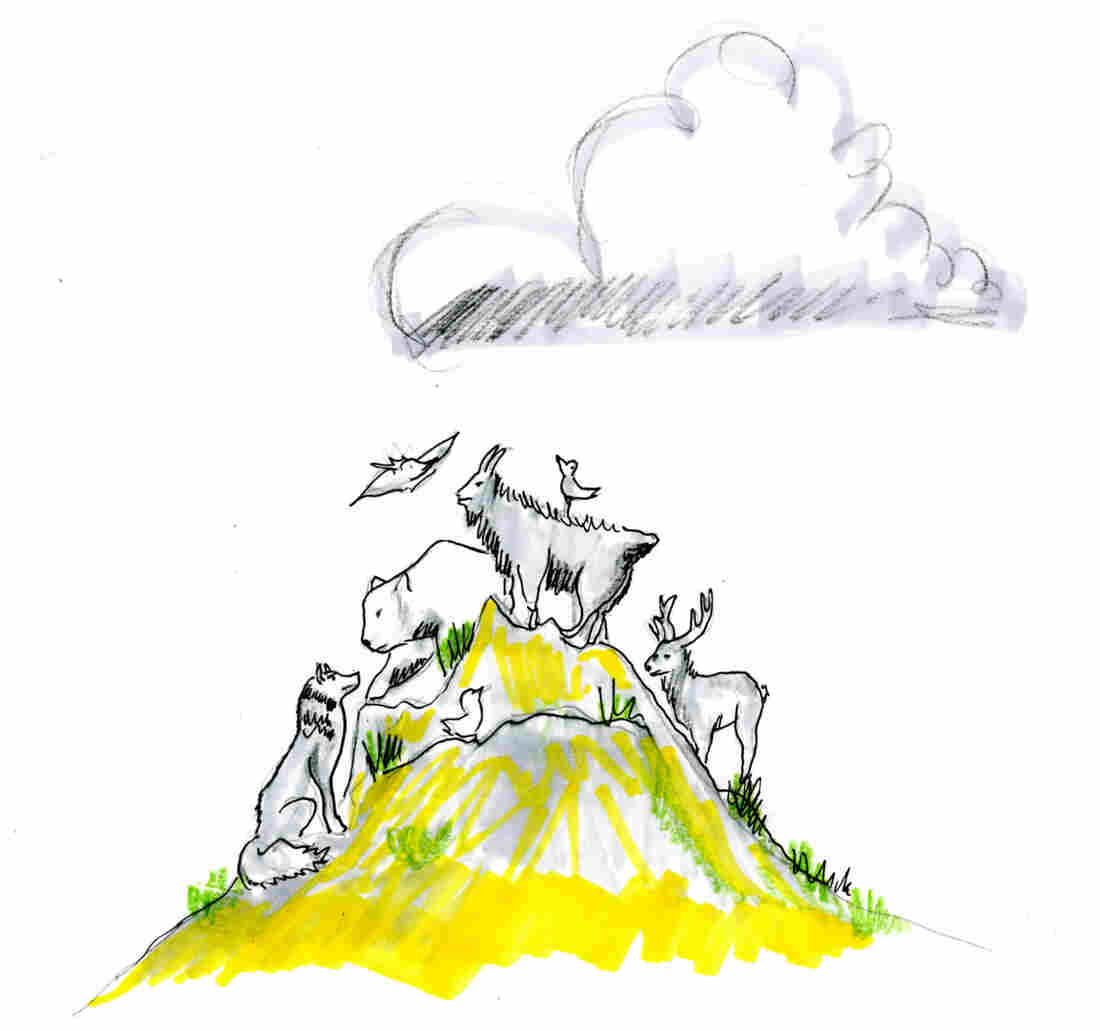 So far I've only mentioned animals, but animals have to eat, nest, seek shelter. It's no good moving to a place where the berries you need, the leaves you need aren't available. Some moving animals need moving plants. Can plants do it too?

Well, in a way they can. Trees, for example, can push their seeds in a desirable direction. After the last great ice age, as it warmed, temperate forests (with help from birds, wind and berry-eating bears) moved north at a rate of more than half a mile per year. This time, can the plants keep up?

Miles Silman, a forest ecologist at Wake Forest University, has been pondering this question. He (and others) have been looking hard at patches of forest on the slopes of the Andes mountains in Manú National Park in Peru. The trees in each patch have been counted, measured, watched, providing a good baseline to see how things have changed. As described by Elizabeth Kolbert in her new book, The Sixth Extinction, one of Silman's grad students, Kenneth Feeley, and his colleagues discovered that trees on these mountain slopes are already in motion. Not all trees, though. Just some.

Feeley looked at changes over a 4-year period, and found that trees have been moving up to get cooler at an average rate of 8 feet a year; but some, Kolbert writes, were "practically hyperactive." Trees from the genus Schefflera, (which we know as part of the gingseng family) were "racing up the ridge at the astonishing rate of nearly a hundred feet a year." Wow! 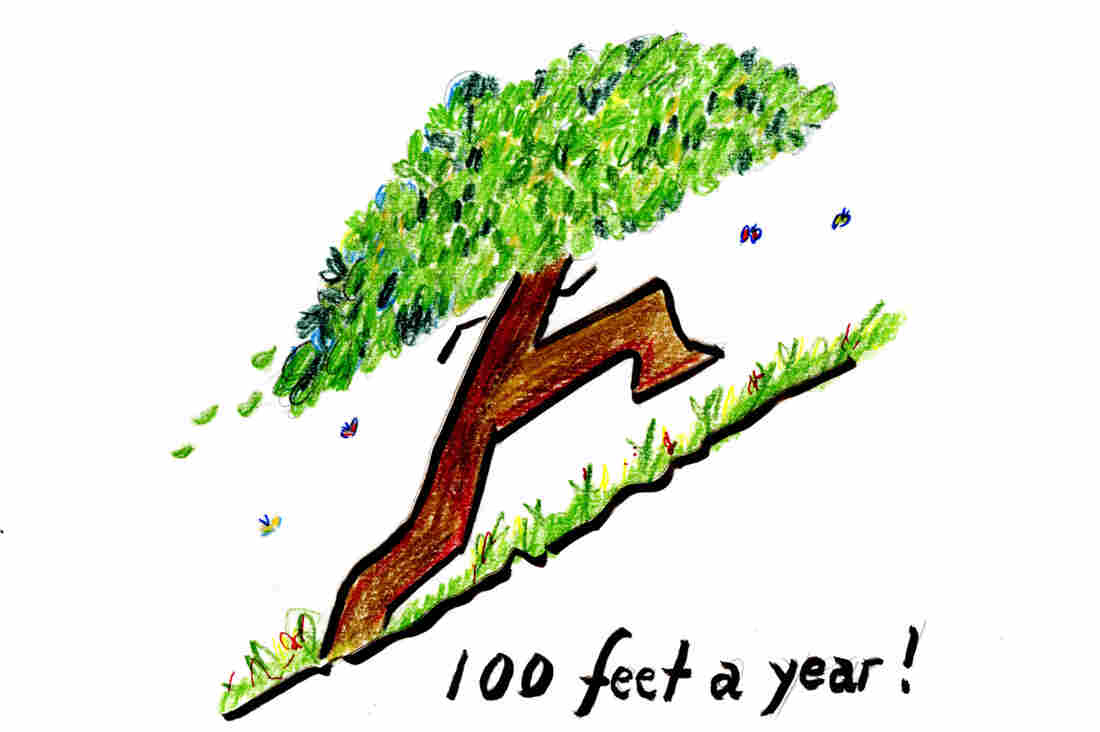 On the lazier side, when the scientists looked at the genus Ilex (a group of trees that, in North America, include the Christmas holly), those trees weren't moving at all, essentially. They'd spent the four years, "more or less inert." 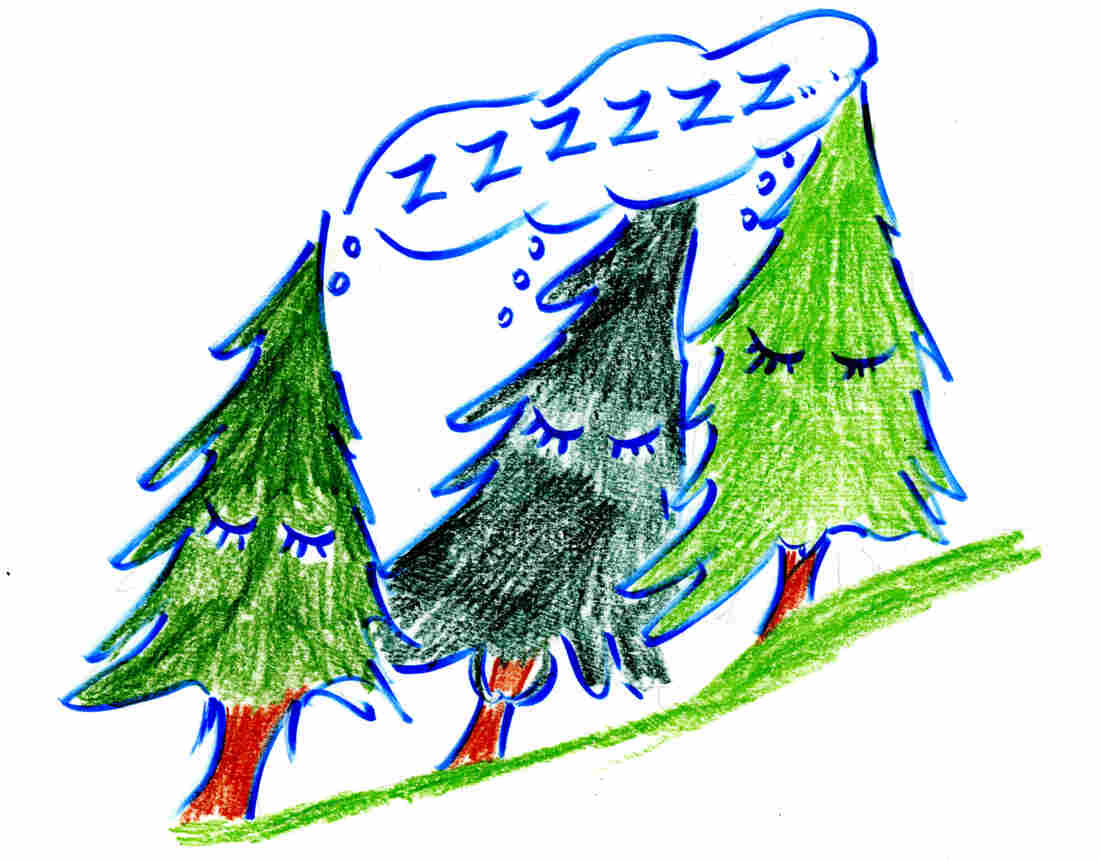 "As the climates change," Chris Field said in the podcast, "plants and animals, at least in principle have the potential to stay in the climate they're in now. ... But the conclusion from our study is that they have to move pretty fast in order to be able to do that." And a lot of them, Field thinks, won't make it.

Some animals will migrate north, but won't find the food they need. Trees may find new zones, only to be inhabited (or attacked) by a new set of animals and pests. Old arrangements will break down. The key, say the authors of this study, is to make sure movement is possible.

What about our National Parks?

We have, of course, set aside huge swaths of land to protect plants and animals. We've got Yellowstone, and even bigger African preserves. But the temperature zones are moving so fast, the Carnegie scientists say, that even in these immense spaces, less than 10 percent of protected areas globally will maintain current climate conditions within their boundaries 100 years from now.

That's going to be a problem. Picture a whole lot of animals (and plants) moving north (or south), trying to stay cool, until eventually they come to the edge of their Canadian, African, Russian or American national park, which is bordered by hotels, motels, car parks, guide centers, roads, power lines.

We humans, having tried to stay out their way, are now back in their way. We need to back off and let them through — but will we? 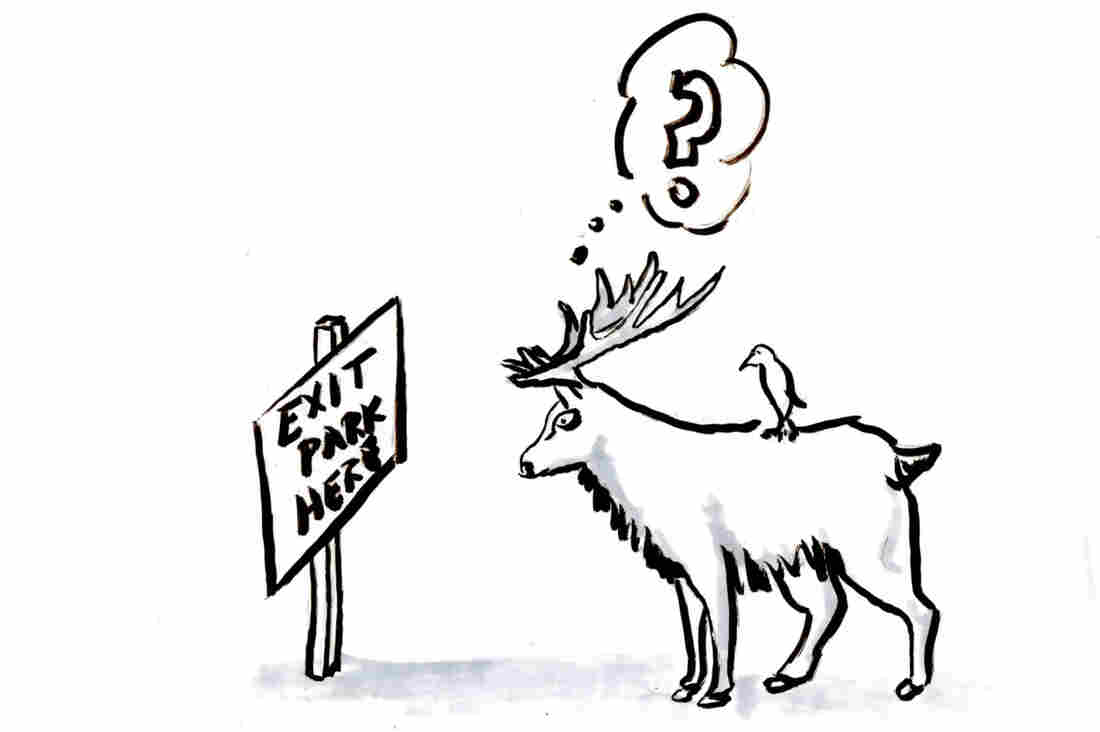