Accessibility links
An Imaginary Town Becomes Real, Then Not. True Story : Krulwich Wonders... Two mapmakers made the place up. It wasn't real. Then, oddly, it popped into being. I am not making this up. It happened. Then it un-happened.

An Imaginary Town Becomes Real, Then Not. True Story

An Imaginary Town Becomes Real, Then Not. True Story

This is the story of a totally made-up place that suddenly became real — and then, strangely, undid itself and became a fantasy again. Imagine Pinocchio becoming a real boy and then going back to being a puppet. That's what happened here — but this is a true story.

It's about a place in upstate New York called Agloe. You can see it here, circled in blue ... 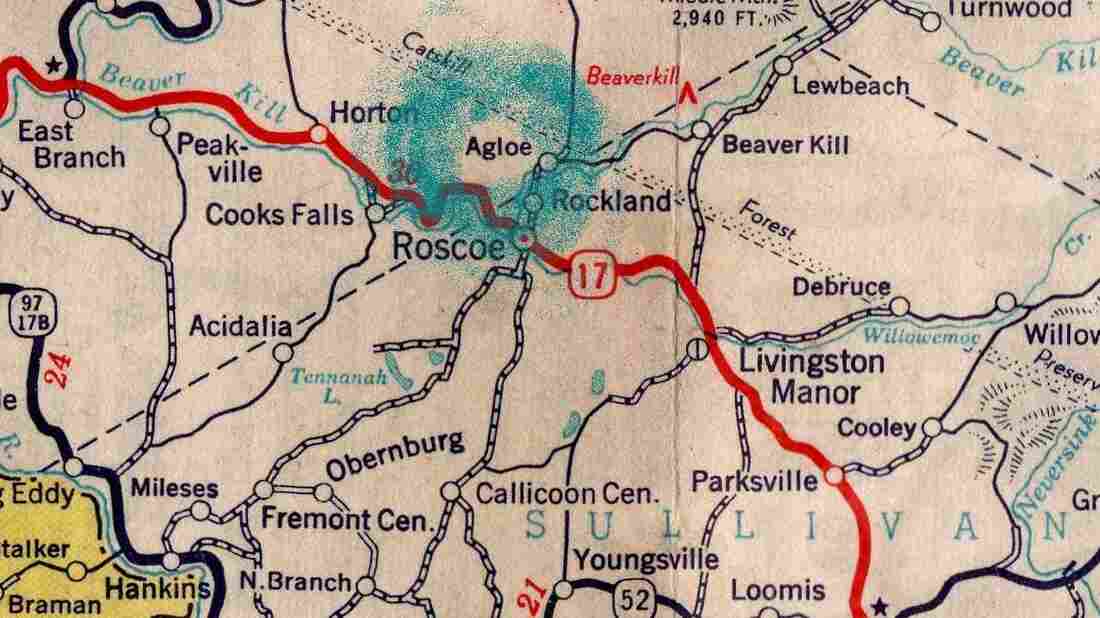 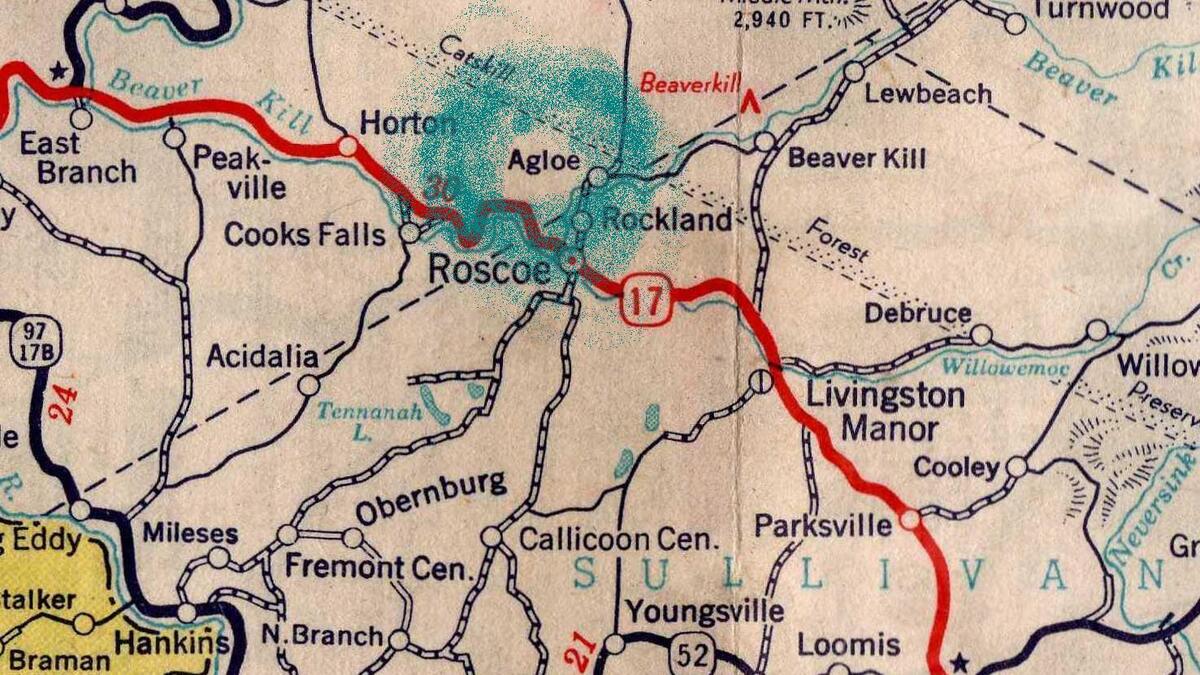 ... just up the road from Roscoe and Rockland.

In the 1930s (I learned from Frank Jacobs' excellent blog, Strange Maps), there was no town on that stretch between Rockland and nearby Beaverkill — just a dirt road. This wasn't an important or often visited place, which made it a perfect spot for what's called a "paper town," or a map "trap."

Companies that create maps get their work copied all the time. You hire a draftsman. You check spellings, you work on the colors, you get all the cities in the right place, and along comes a gas company, or a tourism agency; it takes what you've done, slaps its own name on it. You cry, "Piracy!" and take it to court.

The pirates say, "Prove it." It's a map, they say. It describes what is. Because there's a real world out there, obviously maps are going to be identical. So we're only guilty of describing the same world the other map described. Jurors think, "Hmm, sounds reasonable," and the pirates get away with it. Unless the mapmaker runs a little scam.

That's what Otto G. Lindberg, director of the General Drafting Co., and his assistant, Ernest Alpers, did in the 1930s. They were making a road map of New York state, and on that out-of-the-way dirt road, they created a totally fictitious place called "Agloe." The name was a mix of the first letters in their names, Otto G. Lindberg's (OGL) and Ernest Alpers' (EA). 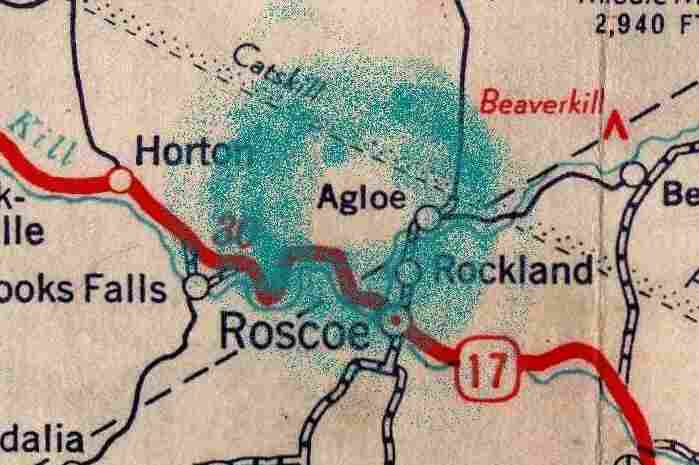 A few years later, Rand McNally, the famous map company, issued its own New York state map, and, guess what? Right there in the same place — same spelling — was the exact same Totally Made-Up Town, "Agloe."

"Gotcha!" cried Lindberg. "No," said the Rand McNally lawyers. And they offered this totally startling defense.

Rand McNally told the court that its designers went to the official map of that county, looked up the coordinates, and on the spot called Agloe they found a building, and that building, they told the judge, is the Agloe General Store. So there is an Agloe. Otherwise, where'd the owners get the name?

Good question. Here's the ironic answer. The owners had seen Agloe on a map distributed by Esso, which owned scores of gas stations. Esso had bought that map from Lindberg and Alpers. If Esso says this place is called Agloe, the store folks figured, well, that's what we'll call ourselves. So, a made-up name for a made-up place inadvertently created a real place that, for a time, really existed. Rand McNally, one presumes, was found not guilty.

Then the store closed. It isn't there anymore. Decades passed.

Now, writes Frank Jacobs, you can go to your computer, "Turn to Google Maps, and type in Agloe ..." and — oh my gosh — there it is! 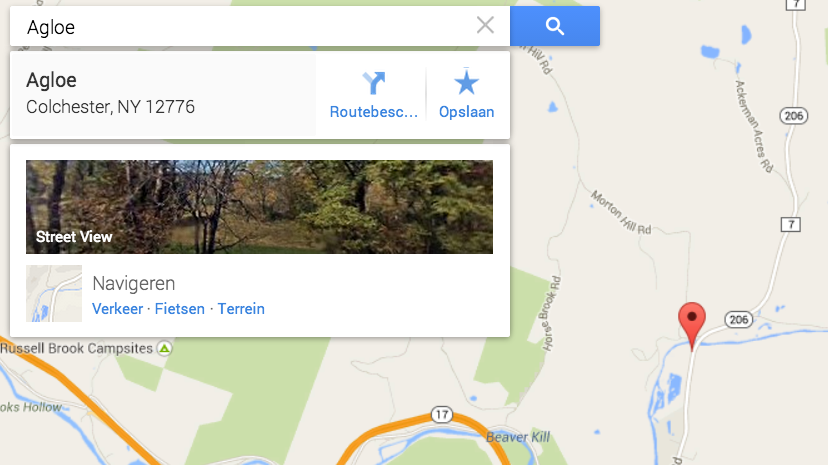 Jacobs says, "[A]n arrow still lands in the spot where Messrs. Lindberg and Alpers placed it, long after the general store there has gone. And long after the General Drafting Company itself has gone. One of the 'Big Three' in road map publishing, [Mr. Lindberg's company] was absorbed into the American Map Company in 1992 and its state maps amalgamated with that company's catalog."

So, as of last week, when I wrote this post, Google was perpetuating an 80-year-old fantasy that for a short time turned real, then unreal. But then, just as this story was to be published, to be extra sure, we went to Google Earth, typed in "Agloe" one last time, and, whaddya know? It isn't there any more!

It was removed this week. And so, instead of a Google Gotcha post, you are now attending an instant online funeral for a town that never was, then was, then wasn't and now isn't. So, I ask you to stand silently, think of the late Otto Lindberg and the late Ernest Alpers, who gave their initials so that Agloe might be; think of the proprietors of the Agloe General Store, and of the Somebody at Google, who, apparently, reads Frank Jacobs' blog, Strange Maps, and reacts faster than I do. Damn that Google guy. And let us say ... Amen.