Accessibility links
The Power Of Poop: A Whale Story : Krulwich Wonders... Whales are famous for spouts and blowholes. Turns out there's another whale opening that's just as important, but I'm too polite to mention it.

The Power Of Poop: A Whale Story

The Power Of Poop: A Whale Story 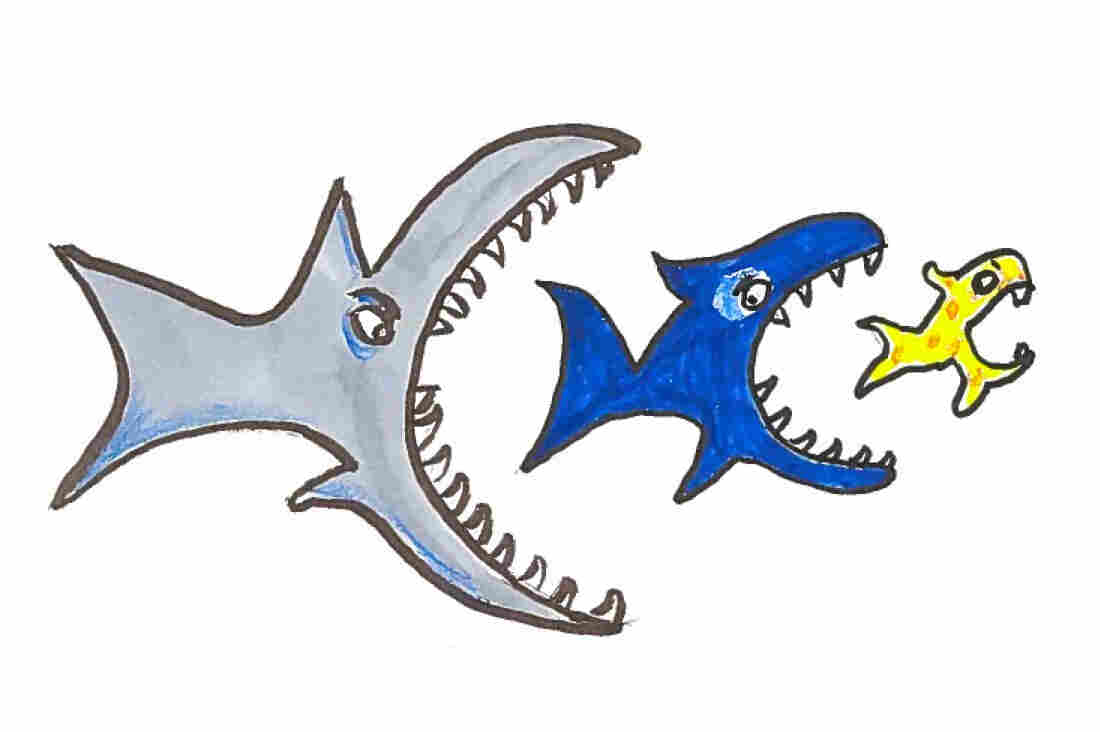 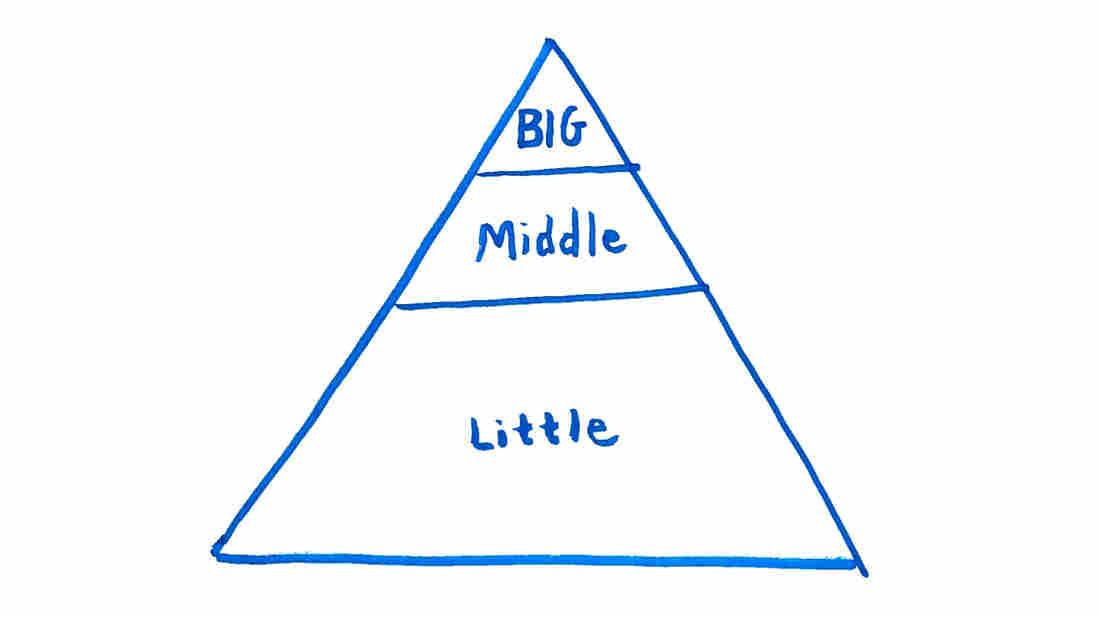 Which brings me to a curious exception — a real life mystery — discovered a few years ago. A marine biologist, Victor Smetacek, was thinking about giant whales — blues, humpbacks and especially the baleens. Baleen whales eat lots of krill, little crustacean critters that look like itty-bitty lobsters. Krill, in turn, eat even smaller, almost microscopic varieties of plankton, diatoms and zooplankton. 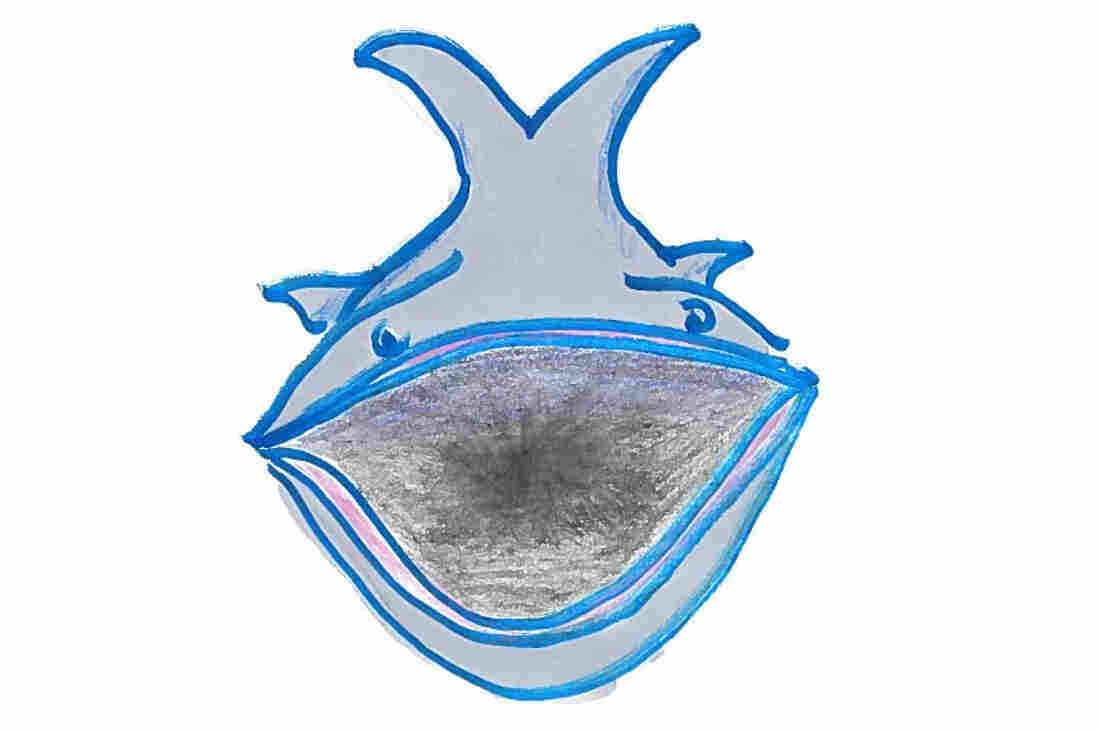 So that follows the classic "biggies eat the littlies" pattern. But what about the few-to-many pyramid? Well, here, when Smetacek looked closely, something wasn't right.

The problem was with the middle group — the krill. 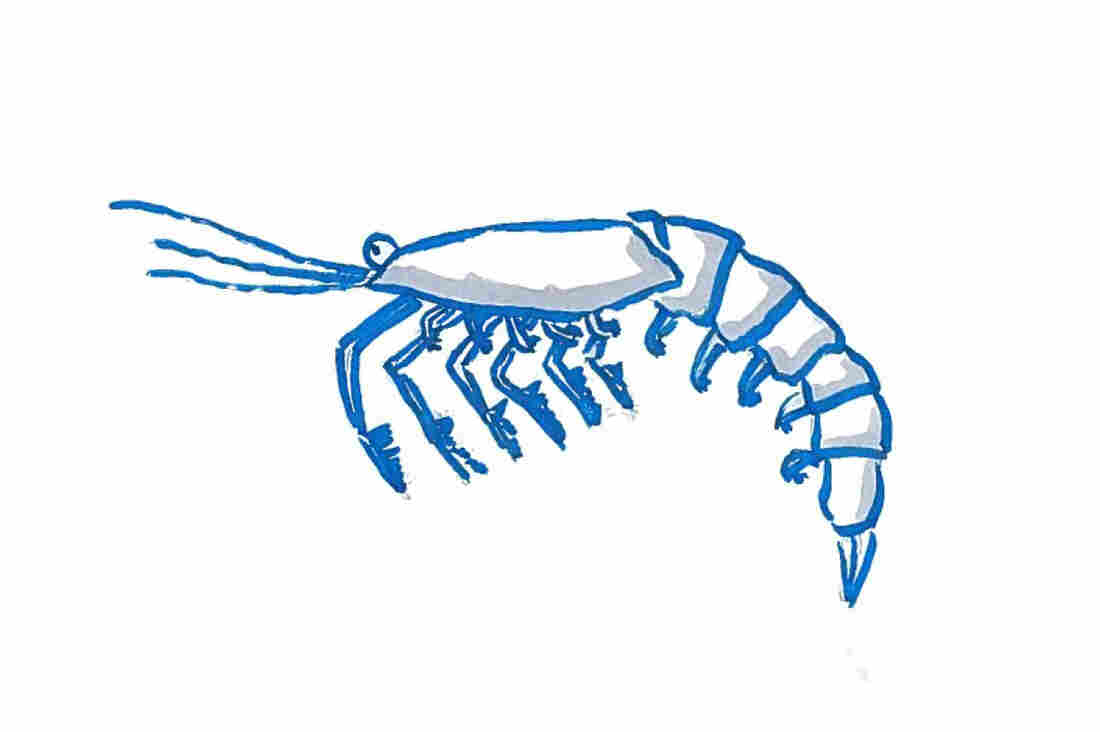 We know how much whales eat today. We know that a hundred years ago, there were lots more whales in the southern oceans. We can guess what the whale population was in 1910. If we multiply the number of whales back then times the size of their meals, we can imagine how much krill had to be in the ocean. It comes out to 1.5 billion tons of krill. As it turns out, that's a whole lot of krill.

Too much for Professor Smetacek.

Krill need iron to grow and multiply. Given what we know about ocean chemistry, Smetacek wrote, there's not enough iron in the southern ocean water to support that many krill. So either the whales had smaller meals a century ago, or somehow the oceans got an extra kick or boost of iron to create more krill.

Nobody was willing to consider a food pyramid that looked like this: 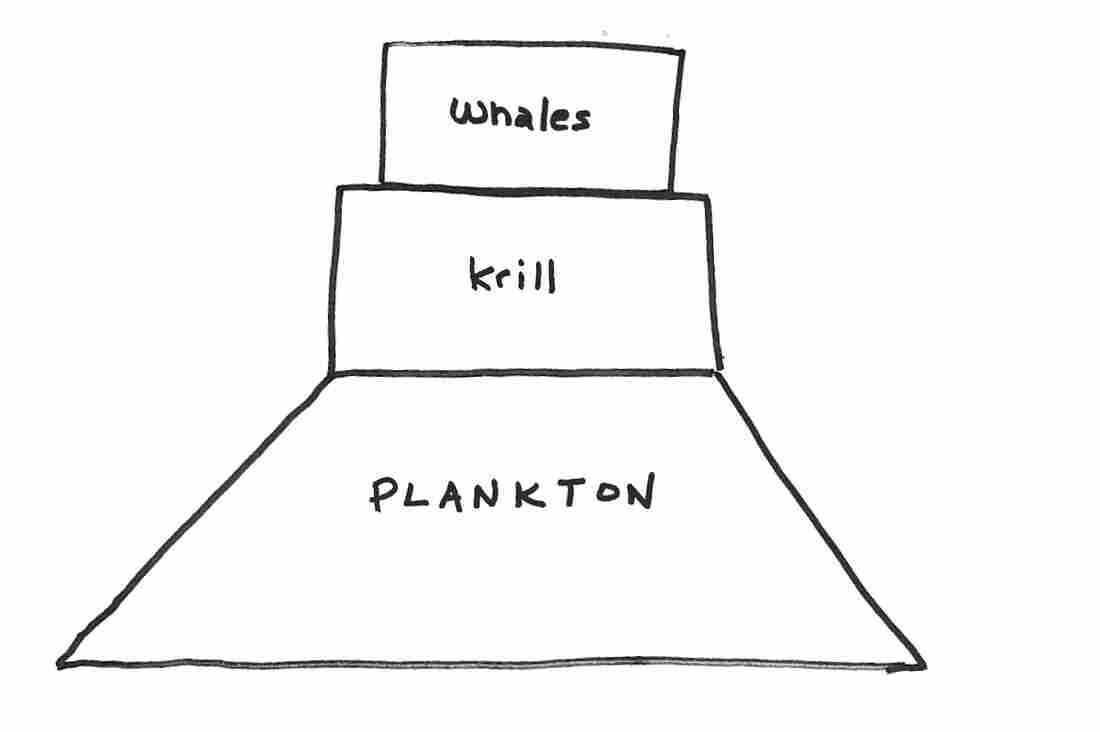 ... with too many big animals on top, and not enough animals in the middle.

And that's when Smetacek proposed what he delicately called in his paper, the whales' extra nutritious "manuring mechanism." (Or, as it's come to be known, his "whale poop hypothesis.") It begins with this obvious observation: Whales poop. In fact, they poop mightily. 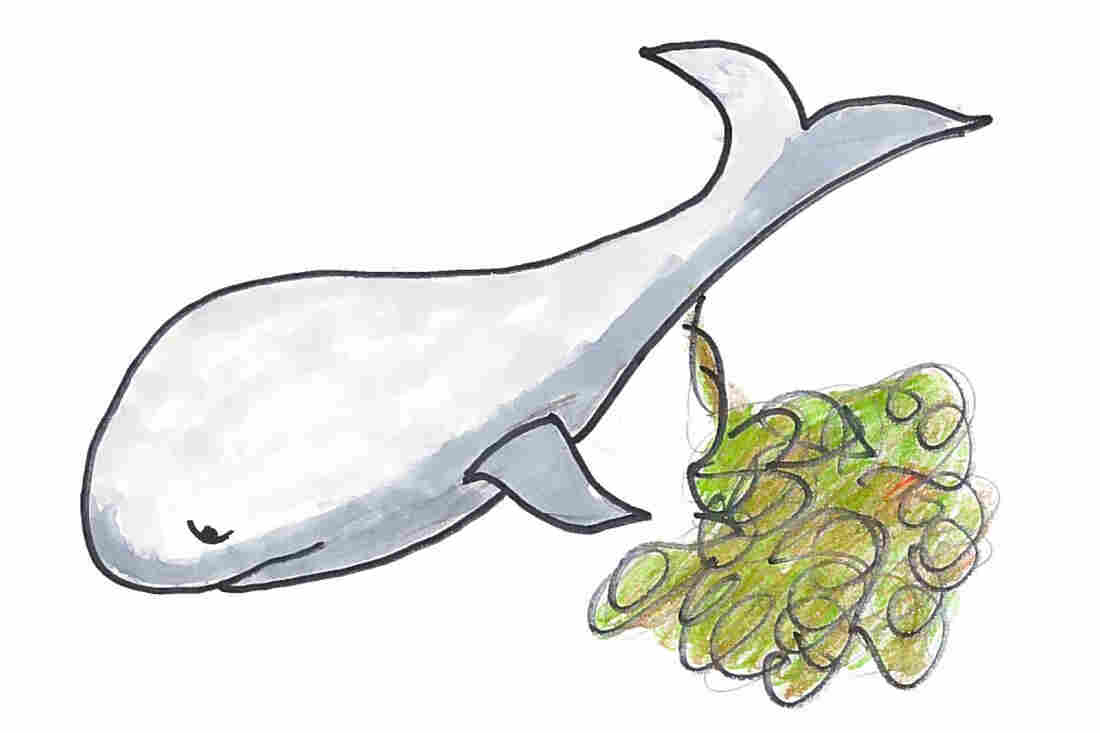 Smetacek proposed that because baleen whales prowl the seas consuming immense quantities of krill, they might, during digestion, concentrate their food into iron-rich deposits which, when the time comes, they eject back into the ocean. Nobody had looked closely at whale poop, but following Smetacek's article, marine biologist Stephen Nicol found, to quote him, "huge amounts of iron in whale poo."

Nicols' team analyzed 27 fecal samples from four species of baleen whales, reported New Scientist. "He found that on average whale faeces had 10 million times as much iron as Antarctic seawater." Basically, that's iron concentrate. And strategically emitted — which would have to be up near the ocean surface, where the sun shines — that extra iron would create blooms of phytoplankton, which would then be eaten by krill, leading to a boost in the krill population, leading to ... yes ... bigger whale dinners! 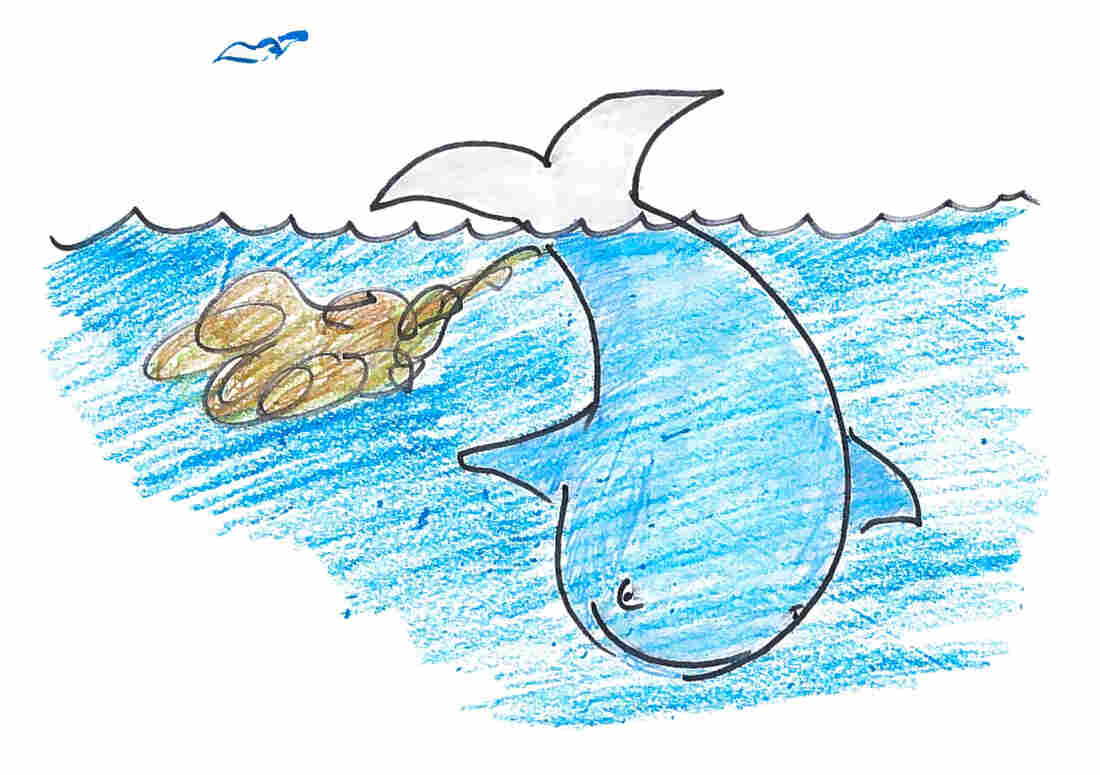 Then, if something nasty were to happen, like ocean-going terrestrials invent boats, harpoons, trawlers, nets and kill masses of whales — instead of the krill population expanding ("Hooray! Those giants who eat us are gone — let's multiply!"), the krill population might shrink. ("Oh no! Those big animals who gave us iron are gone! We're going to starve.")

And guess what? When Antarctica's great whales were nearly destroyed in the 1960s, the krill population, instead of expanding, collapsed, by some 80 percent.

Smetacek got it right. Whales do, in fact, garden the ocean, fertilizing the seas to grow their own food.

Whales recirculate the iron. Even the bits that slip down to the dark bottom get pulled back up by whales. Sperm whales dive to terrifying depths, 3,000 feet below, to hunt iron-rich prey like giant squid. Pressed by the weight of the ocean, their digestion stops; they don't excrete. They consume the iron below, hold it in, climb back to the surface, and that's where they poop. Every sperm whale, it is said, draws 50 tons of iron to the surface every year.

Recycling Yourself Into Abundance

So who knew? A couple of centuries ago, the southern seas were packed with baleen whales. Blue whales, the biggest creatures on Earth, were a hundred times more plentiful than they are today. Biologists couldn't understand how whales could feed themselves in such an iron-poor environment. And now we may have an answer: Whales are extraordinary recyclers.

What whales consume (which is a lot), they give back. As science writer J.B. MacKinnon writes in his book The Once and Future World, "Whales may have been boosting the productivity of the entire ocean, making their own extraordinary abundance possible." 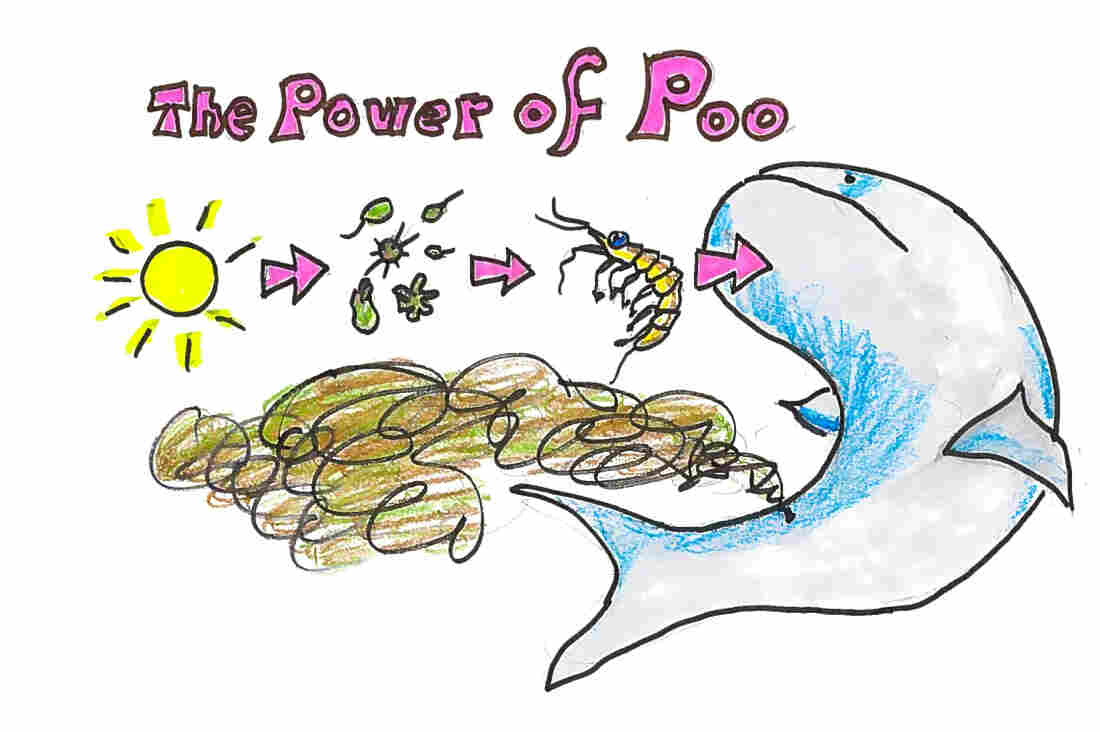