Accessibility links
How To Cross 5 International Borders In 1 Minute Without Sweating : Krulwich Wonders... Nations need borders for security, for revenue, for defense, for identity. But for fun? Introducing borders that giggle.

So many nations are breaking up. Ukraine is in pieces. Moldova is teetering. Libya has no government to speak of. Sudan broke in two last year; now both sides are fighting. Yugoslavia is seven countries. Nigeria has a Christian/Muslim split. Syria has split so many ways it's barely there. Even Scotland is thinking of ditching Great Britain. With every break, we get new lines, new fences, new borders — further evidence of our failure to amalgamate, to get along.

The more borders we have, the more quarrels, the more wars. That's one way to think about borders — they're trouble.

But here's an alternative view. This one celebrates borders. It says, the more the merrier — that under the right conditions borders add spice to our otherwise ho-hum lives, that borders can be fun.

This is, of course, a minority view. Very much so. But border boosters have one extraordinary case for their side, so extraordinary it's almost unbelievable, like a fairy tale. Still, what I'm about to tell you is not made up. I've got maps; I've got pictures. It's true. 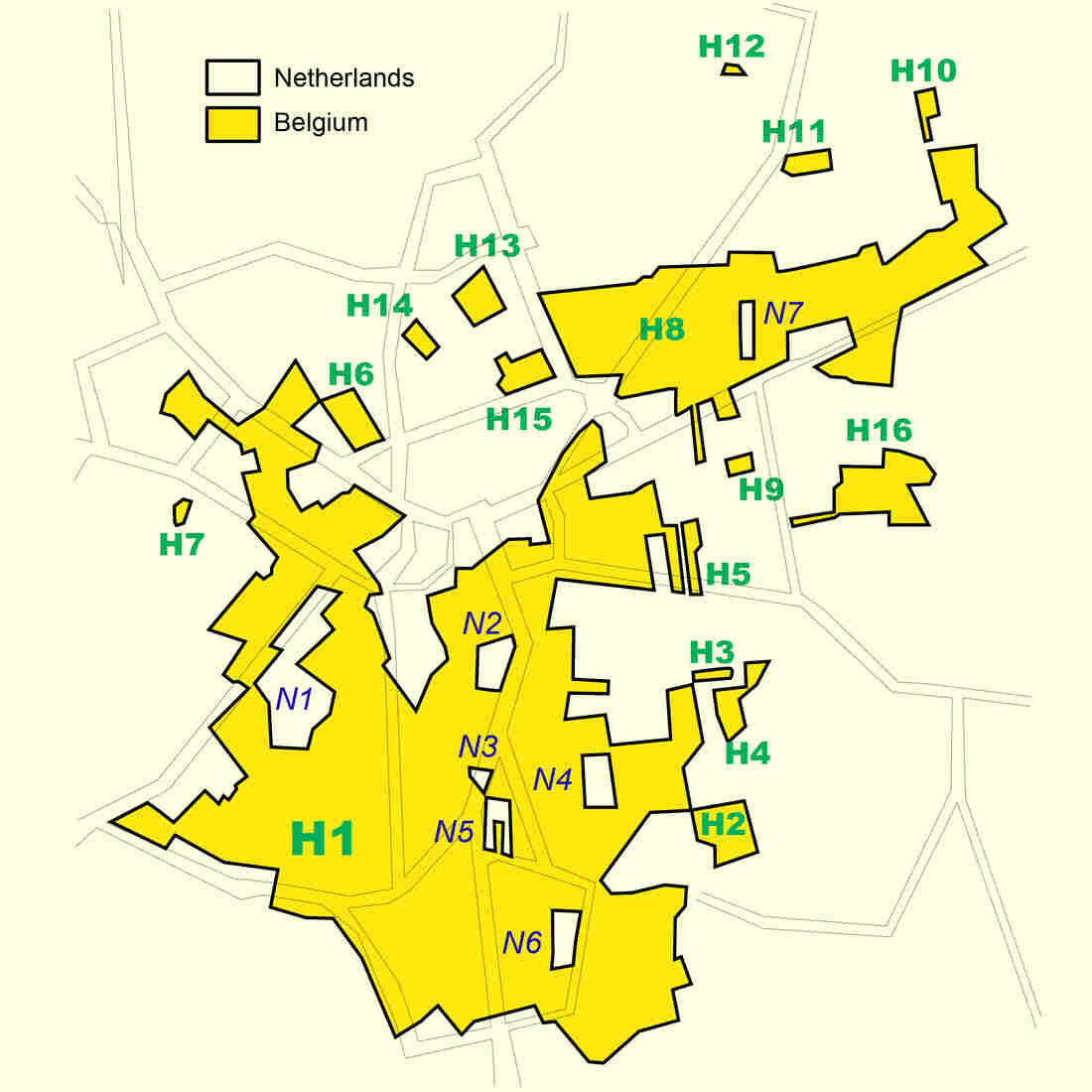 The hunky yellow bit labeled "H1" (for Hartog) toward the bottom is mostly the Belgian town. But notice those little white bits inside the yellow — labeled "N1, N2, N3" — those are little patches of the Dutch town (N for Nassau). The two towns are not geographically separate. Instead, they're like M&M's in a candy bowl. There are 22 distinct Belgian bits, and a dozen or so Dutch bits, and they are sprinkled together; so sometimes you've got bits of Belgium inside Dutch areas, and sometimes Dutch patches inside Belgian neighborhoods. They vary in size. The largest is 1.54 square kilometers, the smallest, an empty field, is 2,632 square meters. 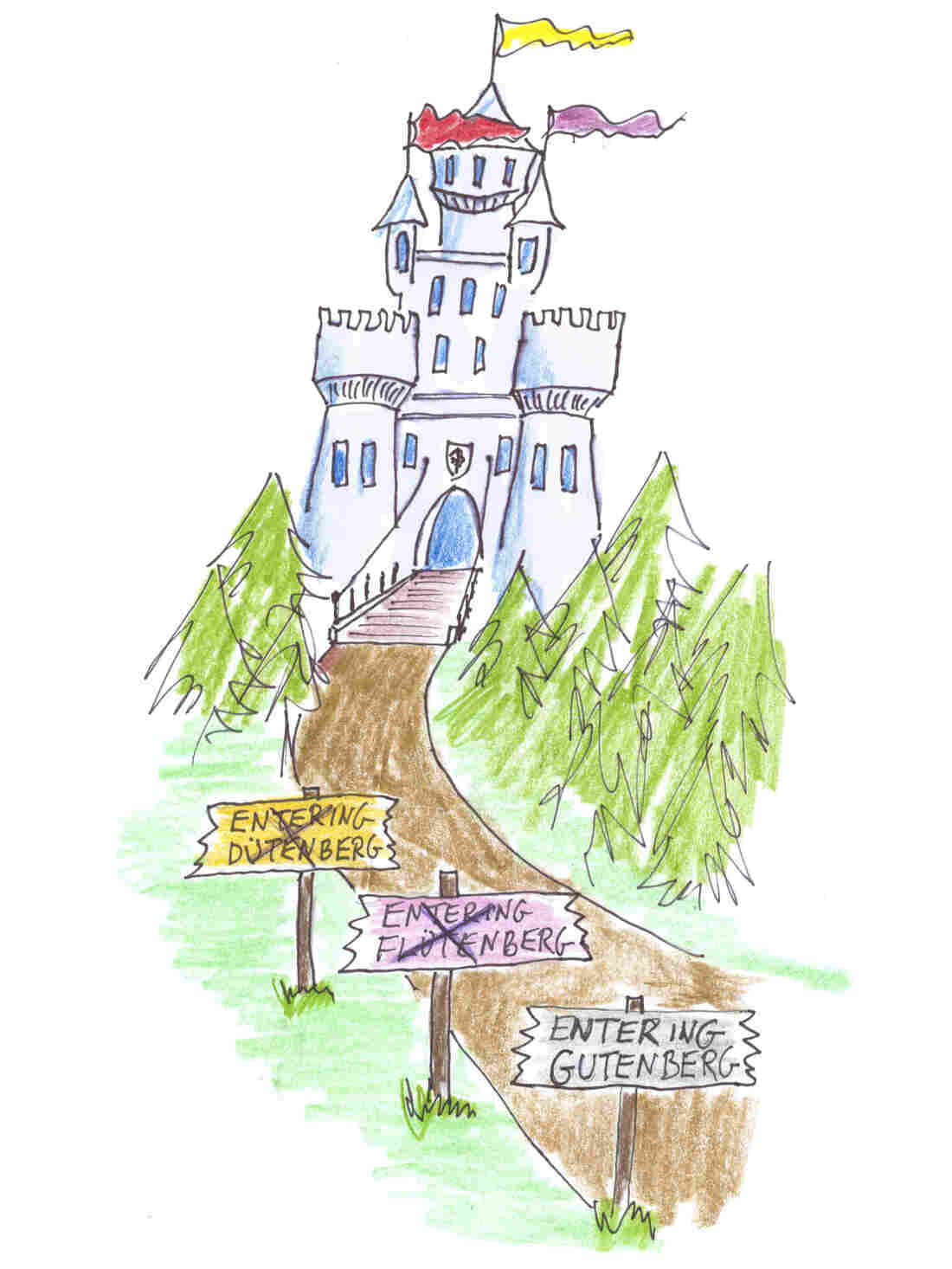 In the Middle Ages, much of Europe was a crazy quilt like this. Princes would control a bunch of fields and forests. They would swear fealty to one king or emperor, then switch to another, marry a neighbor's daughter, adding land, then produce sons (who would divide the land). Sovereignty, in those days, was very fluid. A forest might belong to Prince A, then to Prince B, then later become a mishmash, but nobody was overly concerned. In the Middle Ages, power was sprinkled among minor princes, secular or holy. Checkerboard maps were common.

But then, with the Renaissance and the Enlightenment, princes yielded to kings, kings to laws and parliaments; nations solidified, and wiped away the clutter of little borders within, to defend against threats from without. Local differences were suppressed or erased.

That's what should have happened to our two towns.

But for some reason, writes Alastair Bonnet in his new book, Unruly Places, it didn't. During Napoleon's time, villages were swept cleanly into one nation or another, the borders tidied up, but apparently — and no one can quite explain why — Baarle-Nassau and Baarle-Hertog escaped the broom. Maybe they were too small, too unimportant, but they made it through, their mosaic-ness intact, becoming, Bonnet says, a "living laboratory of medieval micro-borders."

'I Object!' Said The Cattleman

Some folks complained. In 1959, a Belgian cattle dealer, Sooy Van den Eynde, sued to reclaim a Dutch patch for Belgium, and the International Court of Justice, at The Hague, ruled in his favor, transferring 12 hectares of Holland back to Belgium. Presumably to avoid future litigation, a border commission looked at all the various bits and announced that while they were indeed unusual, all these microborders were now known, fixed and legal.

That should have been the end of the story. But there are ways — many ways, Bonnet writes, "of complicating an already complex situation."

"How wide is the border itself?" people asked. "How many centimeters thick is it?" If someone found a rare treasure (a buried necklace and beautiful teacup, say) in a flower garden directly inside the border line, would it be Dutch? asked the Dutch tax man. Or is it Belgian? 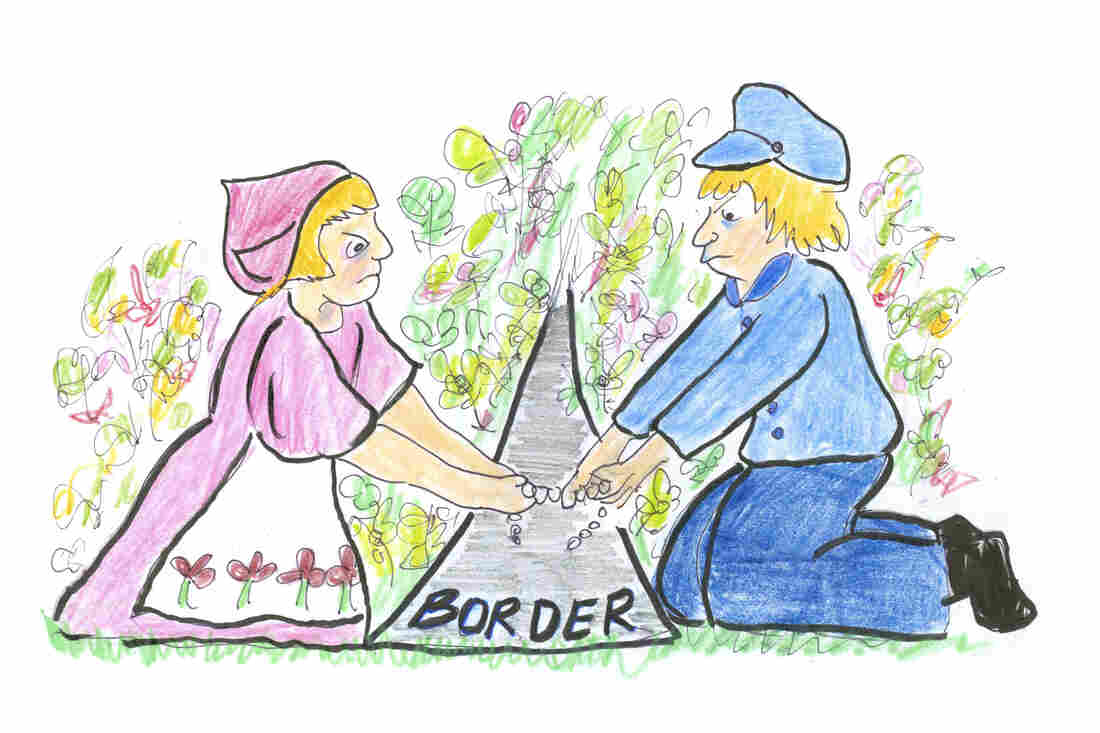 What can a border line pass through? Can a restaurant be half-Belgian, half-Dutch? Can a classroom? A living room? A bedroom?

In (the two Baarles), Bonnet writes, "the custom has been that a property belongs to the country in which its street door is located. 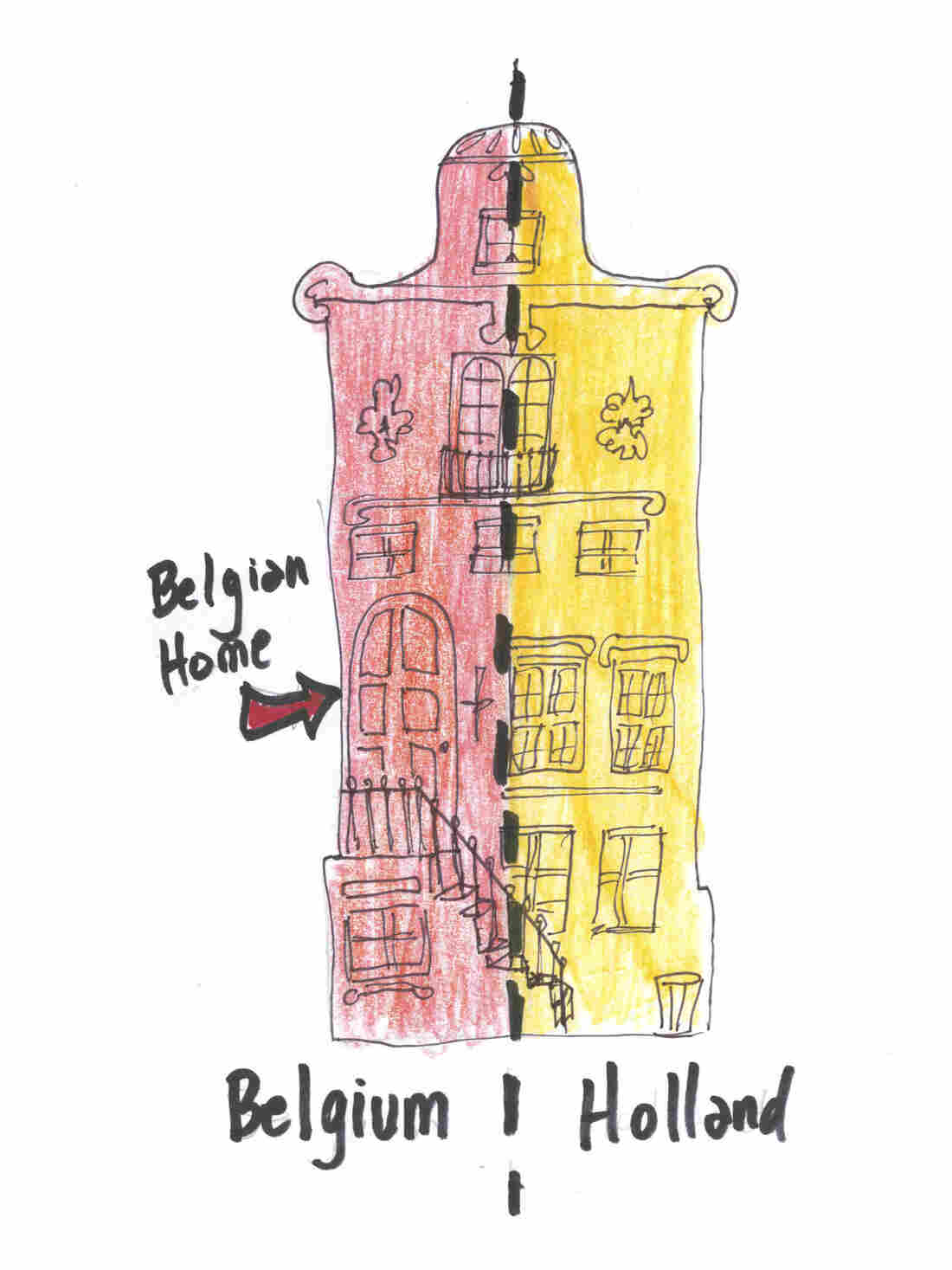 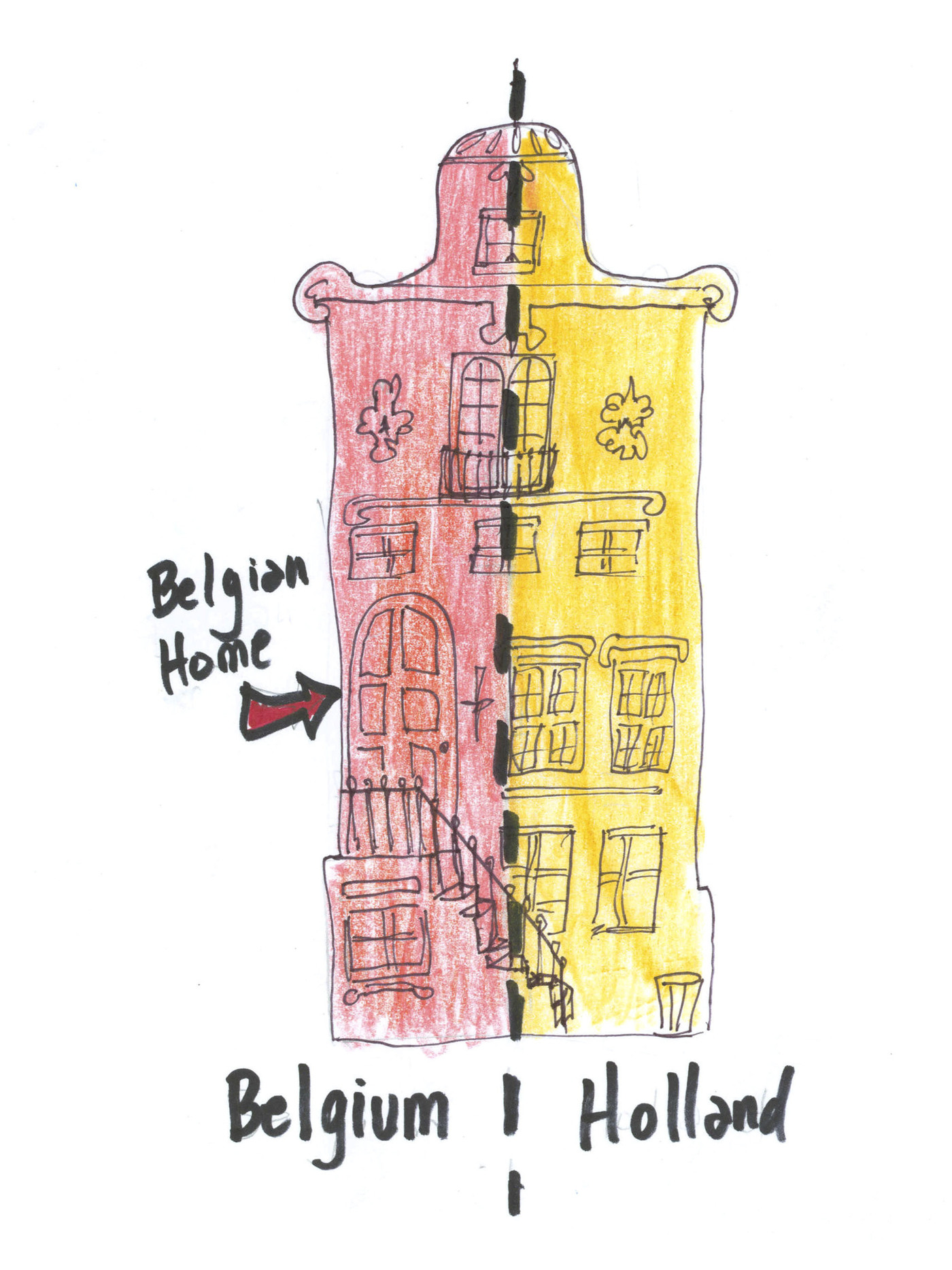 "But what if the border runs through the door? In that case," Bonnett writes, "the unsatisfactory outcome has been that the two parts of the building belong in different nations." (One imagines an angry spouse slamming a spoon on the table, shouting, "I'm leaving for Belgium!" And then walking one step to the left.) 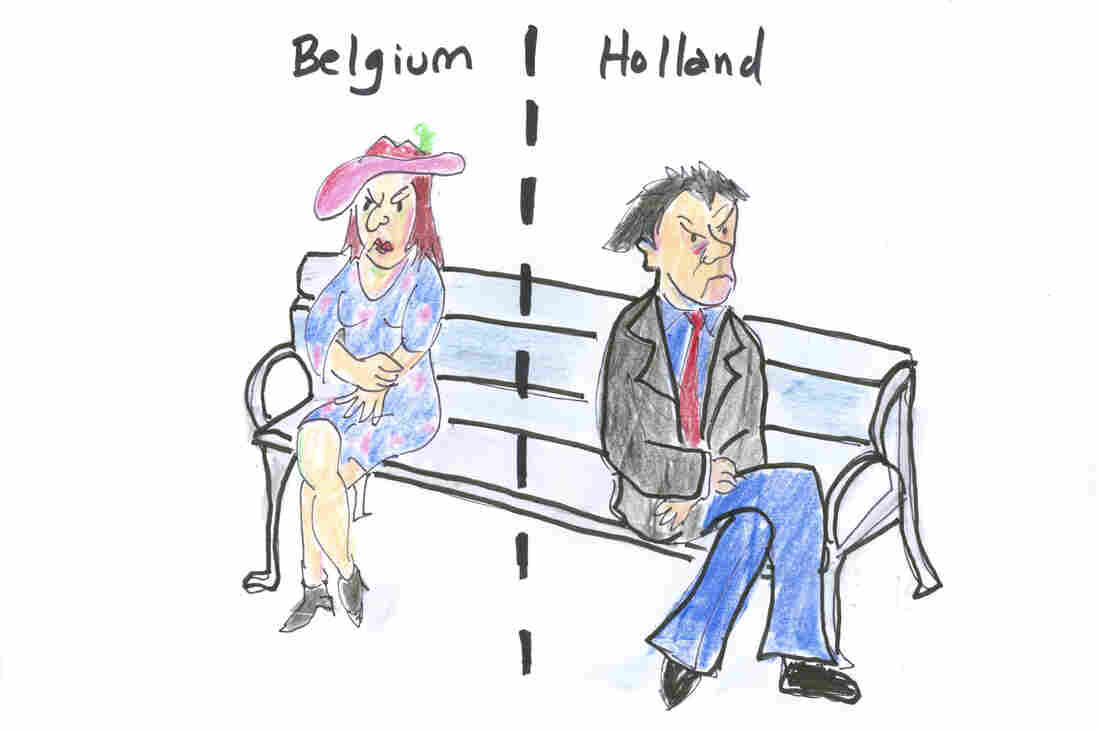 Front doors, of course, can be moved. When the tax rate in Holland became disadvantageous, that's what people did; they shifted their doors "a few feet to the cheaper country." That is happening less often now, as Belgium and Holland are both members of the European Union, which has smoothed out tax rate differentials. So, these days, instead of being serious, borders have become a form of play.

If you visit the Baarles (and Alastair Bonnett did) you wander the streets constantly wondering what country you're in. Sometimes the sidewalk tells you. On many street corners, "the borders are marked, by white painted crosses on the pavement." 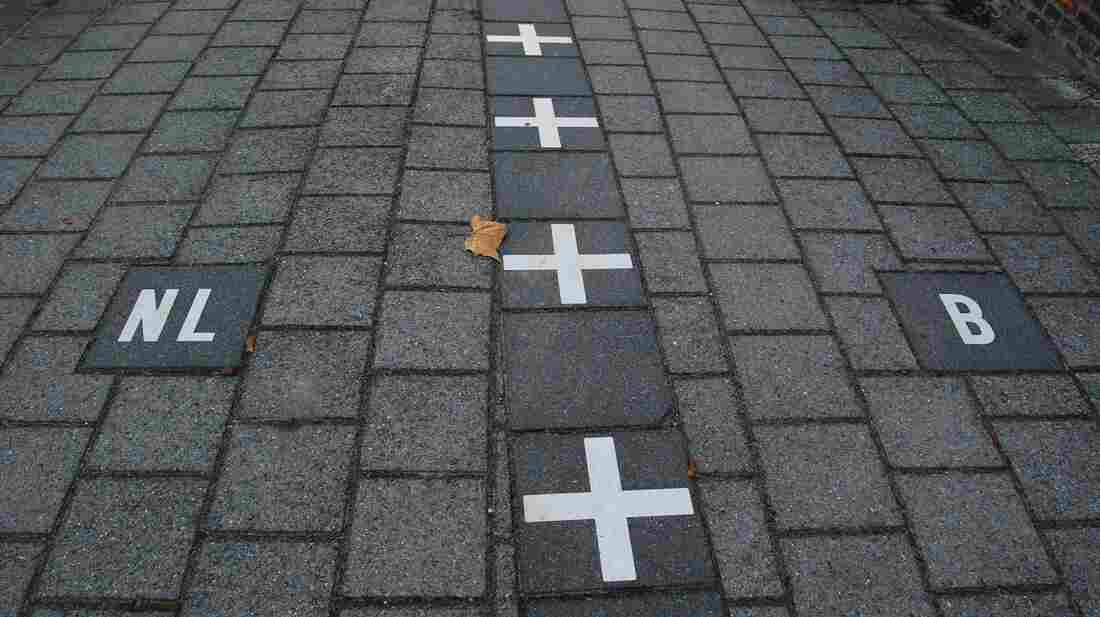 But not all. That's why some homes fly national flags, or have them affixed to their doorfronts. And still you can't be sure: "On one 160-meter stretch of Kapelstraat, where visitors leave one large Belgian enclave only to pass through the borders of two nearby rectangular Belgium slivers, I was able to walk in a straight line across five international borders in a minute," Bonnett writes.

For some folks (me, me, me!) this seems like wonderful fun. For others, (many, many others) a walk through the Baarles would be a kick for 10 or 20 seconds, and then ... not.

Both villages have applied to be listed by UNESCO as a World Heritage site, because they believe they are a living monument to cartographic complexity. "It's a worthy bid," writes Bonnett, "but I'm not sure [the Baarles] will ever attract many visitors ... for, apart from the quirkiness of the borders, there isn't a lot to see."

But maybe it's what you don't see that UNESCO should honor. Here are two sets of people, with two different histories, two different cultures, who choose to point out their differences by drawing lines — more borders than almost anywhere else on Earth — and instead of keeping folks apart, these lines are for sharing. Instead of a snarl, they come with a giggle. Small as it is, that's an accomplishment.

Read an excerpt of Unruly Places

This post originally described Myanmar (also known as Burma) as having a "Muslim/Hindu split." That is incorrect. As the CIA World Factbook notes, Myanmar's population is nearly 90 percent Buddhist, with most of the remaining population Muslim or Christian.