Accessibility links
Building Me: A Puzzlement : Krulwich Wonders... I am made of atoms — 7,000 trillion trillion of them. How did I teach them to tie my shoes? Or did they teach me?

Building Me: A Puzzlement

Building Me: A Puzzlement 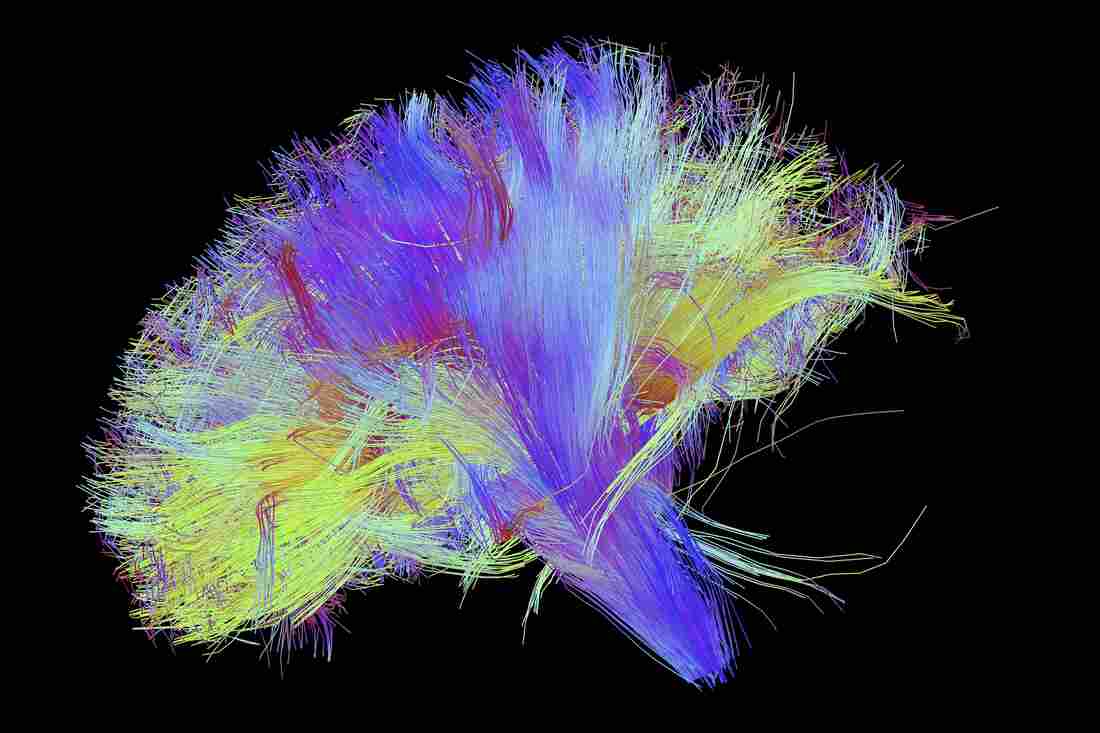 It's a puzzle — the deepest puzzle I know. The question is: What are we?

One answer, from physicist-novelist Alan Lightman, is we are stuff. Just stuff.

"Let me explain. A highly unpleasant idea, but one that has been accepted by scientists over the last couple of centuries, is that we human beings, and all living beings, are completely material. That is, we are made of material atoms, and only material atoms. To be precise, the average human being consists of about 7 x 1027 atoms (7,000 trillion trillion atoms) — 65 percent oxygen, 18 percent carbon, 10 percent hydrogen, 3 percent nitrogen, 1.4 percent calcium, 1.1 percent phosphorous, and traces of 54 other chemical elements. The totality of our tissues and muscles and organs and brain cells is composed of these atoms. And there is nothing else. To a vast cosmic being, each of us would appear to be an assemblage of atoms. To be sure, it is a special assemblage. A rock does not behave like a person. But the mental sensations we experience as consciousness and thought are purely material consequences of the purely material electrical and chemical interactions between neurons, which in turn are simply assemblages of atoms. And when we die, this special assemblage disassembles. The total number of atoms in our body at our last breath remains constant. Each atom could be tagged and tracked as it subsequently mingled with air and water and soil. The material would remain, scattered about. Each of us is a temporary assemblage of atoms, not more and not less. We are all on the verge of material disassemblage and dissolution."

OK. But poet-writer Diane Ackerman wonders, how do atoms, inert spinning clumps of matter, produce the feeling, the deep feeling of being ... me?

"After all, the mind is such an odd predicament for matter to get into. I often marvel how something like hydrogen, the simplest atom, forged in some early chaos of the universe, could lead to us to the gorgeous fever we call consciousness. If a mind is just a few pounds of blood, dream and electric, how does it manage to contemplate itself, worry about its soul, do time-and-motion studies, admire the shy hooves of a goat, know that it will die, enjoy all the grand and lesser mayhems of the heart? What is mind, that one can be out of one's? How can a neuron feel compassion? What is self? Why did automatic hand-me-down mammals like our ancestors somehow evolve brains with the ability to consider, imagine, compare, abstract, think of the future? If our experience of mind is really just the simmering of an easily alterable chemical stew, then what does it mean to know something, to want something, to be? How do you begin with hydrogen and end up with prom dresses, jealousy, chamber music?"

Yes, how do you? There is no deeper puzzle.

Alan Lightman's meditation comes from an article he wrote in last month's Nautilus Magazine, the August 2014 issue about nothingness. He called his essay "My Own Personal Nothingness: From a childhood hallucination to the halls of theoretical physics," and you can read the whole, lovely thing here. Diane Ackerman's puzzlement comes from her book The Moon By Whale Light, published back in 1992. It is still my favorite version of the question everybody, at some point or other, asks.