Accessibility links
Souls Tumbling In The Light : Krulwich Wonders... Every fall, birds head south and, around Sept. 11, New York sends two beams into the sky. When birds and lights collide, that could mean trouble — but New York is surprisingly gentle.

Souls Tumbling In The Light

Souls Tumbling In The Light 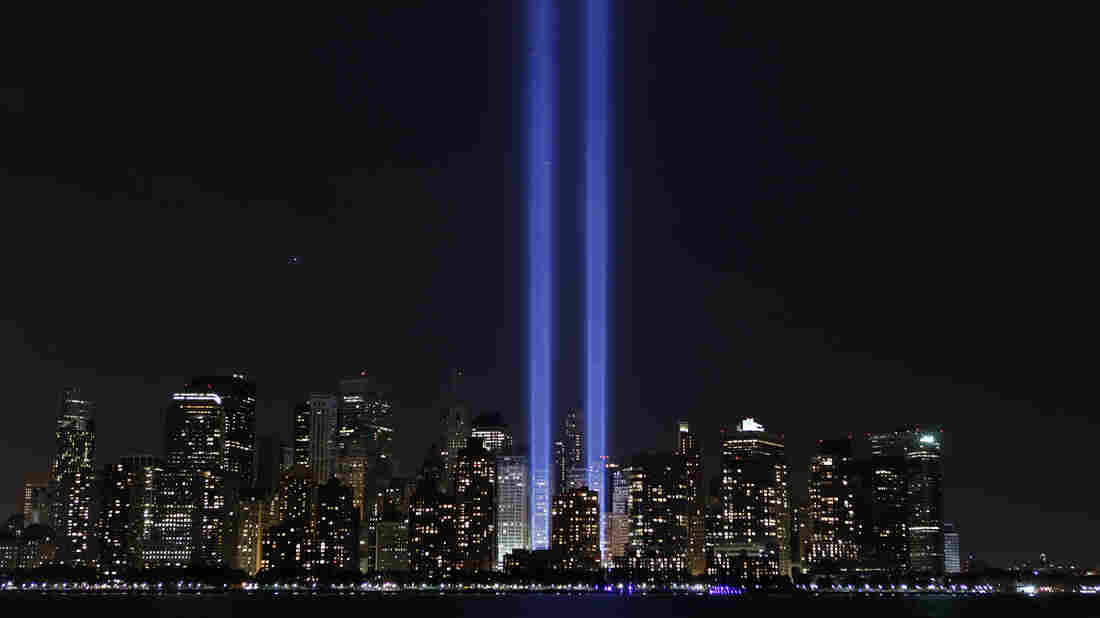 When it gets dark, New York City turns on 88 7,000-watt xenon light bulbs to produce two powerful beams that shoot up, side by side, to remind us that once upon a time, two towers stood here, and then didn't, and this is how we remember the day they came down — by looking up.

They are beautiful, these beams. Fragile. Elegant. Heaven-bound, but they have an unfortunate side effect. They attract migrating birds. The light pulls warblers and thrushes and orioles and tanagers off course, beckoning. And once they enter the columns, many of them stay, swirling round and round, apparently unable to leave.

In 2002, writer Craig Childs and a friend were in lower Manhattan when the lights went on. In his book The Animal Dialogues, he writes that as they walked closer, "we realized the lights were filled with movement. Countless birds raced in and out, bright, meteoric paths cutting the sky. ... Never had I seen such a gathering, plumes of birds billowing upward, multiplying upon themselves until they appeared infinite, as thick as Milky Way stars."

From the street below, he could hear them crying out, making their night calls. Multiplied by thousands, their cries were louder than the city traffic. "As we walked closer, the birds became more brilliant and numerous, a mass of charged, speeding particles. As each crossed into the light, it was suddenly branded white, turned into pure light." Here (from Cornell ornithologist Andrew Farnsworth), is what they look like ...

"They must be feeding," Craig decided. "But few species of birds besides whip-poor-wills and nighthawks are night feeders." So, no, they were just stuck. The birds "were fixed solely on these two lights. ... Many would probably die because of this, their energy diverted, wings exhausted. We were killing them."

That was back in 2002. The folks who run New York's Tribute in Light noticed all those birds and didn't want their memorial, this memorial especially, to harm innocent beings going about their daily lives; so, ever since, they have worked with volunteers from New York's Audubon Society to check on the number of birds caught in the beams. When the sky gets too crowded, the Municipal Arts Society turns the lights off, for 20 or 30 minutes. That gives the migrants a chance to scatter, and resume their trips south.

"[A]s soon as the lights were off," reports Cornell's Andrew Farnsworth, "the calling activity dropped to almost zero." The birds calmed, and went their various ways. Some years there's little or no need to flip the switch; only a few hundred birds pass through every hour. But when the wind is blowing the right way, when a weather front is signaling "time to fly," tens of thousands of birds will show up; and in 2004, and again in 2010, the lights were shut down five separate times.

That's as it should be. Lives were lost on that bright dark day, 13 years ago. When we turn our giant candles to mark their passing, we don't want to hurt anybody. Those little winged flashes of white tumbling through the night look too much like souls. They need their rest.

Ornithologist Andrew Farnsworth's work over various Sept. 11 memorials is chronicled in Paul Bogard's The End of Night: Searching for Natural Darkness in an Age of Artificial Light; Craig Childs' trip to the World Trade Center shows up in his remarkable, raucous, totally wonderful essay collection, The Animal Dialogues: Uncommon Encounters in the Wild.