Accessibility links
This Blog Is Ending Soon : Krulwich Wonders... Krulwich and his Wonders are packing up, and before I go, I'd like to shake all your hands, each and every one of you, and say thank you. This is my goodbye.

This Blog Is Ending Soon

This Blog Is Ending Soon

NPR (in the form of a super-top executive) sat me down and, after four years of generously supporting this blog, told me it can't anymore. It needs to cut costs and — you know the phrase — it has chosen to go "in new directions." So at the end of this month, Krulwich Wonders will no longer appear on NPR's website.

Things change. Needs change; fashions change. You can't stand still. Not in this business, not now. I've been hanging out at NPR, full time, part time, missing, then back again, for almost 40 years. I have watched it grow from a crazy, mad notion. ("Let's make radio do serious journalism" — this said at a time when Casey Kasem's Top 40 Music Countdown was radio's most conspicuous achievement.) It's hard to explain what a nutty idea NPR was when it started.

Let's Do This Totally Unlikely Thing ...

In the 1970s, The Washington Post was toppling presidents; The New York Times was everywhere and always dazzling; Cronkite had his Kuralts, his Sevareids, his Rathers, his Schorrs. Anybody serious about journalism could have worked for any of these places (and they were hiring!), but for reasons too dreamy to remember, nomads like Linda Wertheimer, Ira Flatow, Nina Totenberg, Robert Siegel and the glorious Susan Stamberg, along with a team of dangerously talented engineers and editors, decided against all reason to do this utterly unnecessary thing — to go, in a world of plenty, to the abandoned parking lot that was radio and start talking to people in an old but new way, not to their eyes, but to their ears, playing them the sounds of America, the cries, screams, laughs, the roar of the world — and look! It worked. People driving, people on StairMasters, people in hammocks, people in cubicles and people parked in their driveways stayed and listened. I was part of all that. I moved on, moved back, and then, ridiculously, asked if I could serve the Radio Gods by writing multiweekly posts and drawing pictures. 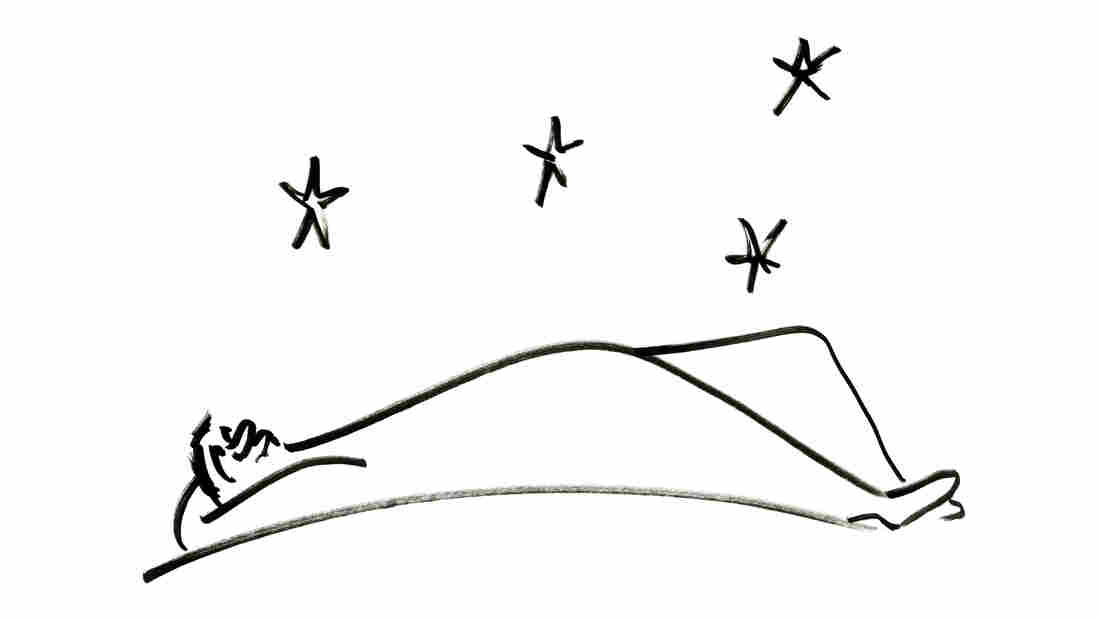 Writing and drawing — neither are radio arts. But, gambling yet again, NPR said yes. And so, for the past four years, with a box of colored pens and pencils and the endless ("you want to do what?") help of younger co-conspirators, I've gotten to write about beetles, astronauts, artists, dinosaurs, chemistry, math — pretty much anything that caught my eye.

It's been crazy fun. I even got an admiring but chiding email from (oh, my God!) Neil Armstrong, when I wondered out loud why he had stayed so close to his lunar lander while "exploring" the moon. You weren't there, he wrote, let me tell you how it was. ... That message is now tucked in a special place on a high shelf in my living room, with a bunch of others, from you — you who've been reading this blog.

When you work in radio (or TV), it's hard to know what the audience is thinking. You talk; they listen. There's a gap, a quiet, between us. True, when I began at NPR, I'd get a steady trickle of letters, 10 a week maybe, and had a wispy notion of what was going on in your heads. Then, in the 1980s came 800-numbers. I'd get off the air, and people would just call toll-free; there'd be a twinkle of lights on the phone, I'd pick up and "continue" what you thought was our conversation ("Why didn't you talk to so-and-so? Have you read my brother-in-law's article? You didn't?" ... ); but now, in this digital space, it's so different. When I post the blog, it feels like I've landed at some grad school cafeteria, where people slam down their trays, chide, offer advice or sometimes just quietly reach under the table and hold my hand.

Angrier And Friendlier, Both

It's wilder, much wilder, than it used to be; noisier too, but that's good. I've been hammered, stroked, quizzed, but I've learned, been humbled or fought back. Those backs and forths are sometimes painful, but people don't just shout, they tell me things I didn't know, send me videos, drawings, edit stray misspellings. All this backing and forthing has led to new friendships, introduced me to people on the bleeding edge of animation, design, storytelling. Nobody likes getting smacked, but maybe it's worth it if you learn more than you hurt. What I learned over the past four years is the news world has become both angrier and friendlier, both at once. And what digital NPR is becoming (what Radiolab, my other gig, has become even more) is a forum, a place to learn, to talk, yell and sometimes — the best times — to giggle. On its best days, it's a place to reflect.

I can't pretend. I'm sorry to have to move on, and what I'd like to say to all of you who've stopped by, not knowing what to expect, not always satisfied, not always quiet about it, is: I've loved being here, doing this, playing as hard as I can with ideas that excite me. It's good to have playmates, and I hope, wherever I go to next, you'll join me there and we will keep happily wrestling with the world, as NPR does so wonderfully every single day.

I will be here till the end of the month.

Here's who's gotten my pictures in the right order, my ideas straight, my misspellings corrected, my grammar righted, my inane ideas thrown out, my moods managed, my downs upped, my drawings color-corrected, my ideas illustrated; it's a nice, nice group, led by (because she was there when we began and has been by my side ever since) the wonderful Maggie Starbard and her many-splendored colleagues, Deb Franklin, Jessica Goldstein, Andrew Prince, April Fehling, Maria Godoy, Jason Orfanon, plus a host of artists, Josh Kurz, Adam Cole, Ben Arthur, Vin Liota, Connie Sun, Aaron Birk, Will Hoffman, Todd Rosenberg, plus my brainy backfield, Ezra Block, Aatish Bhatia, Ed Yong, Jonah Lehrer, Carl Zimmer, and huzzahs to the New York bureau's Manoli Wetherell and Brian McCabe, the Radiolab gang — especially Brenna Farrell, Arianne Wack and Jamie York — and, in Washington, Alison Richards, Vikki Valentine and Anne Gudenkauf.

Editor's note: While Robert's Krulwich Wonders blog may be coming to an end, his unique brand of storytelling won't be lost to public radio. Robert expects to still be co-hosting WNYC's award-winning program Radiolab with Jad Abumrad, heard by millions of public radio listeners each week.