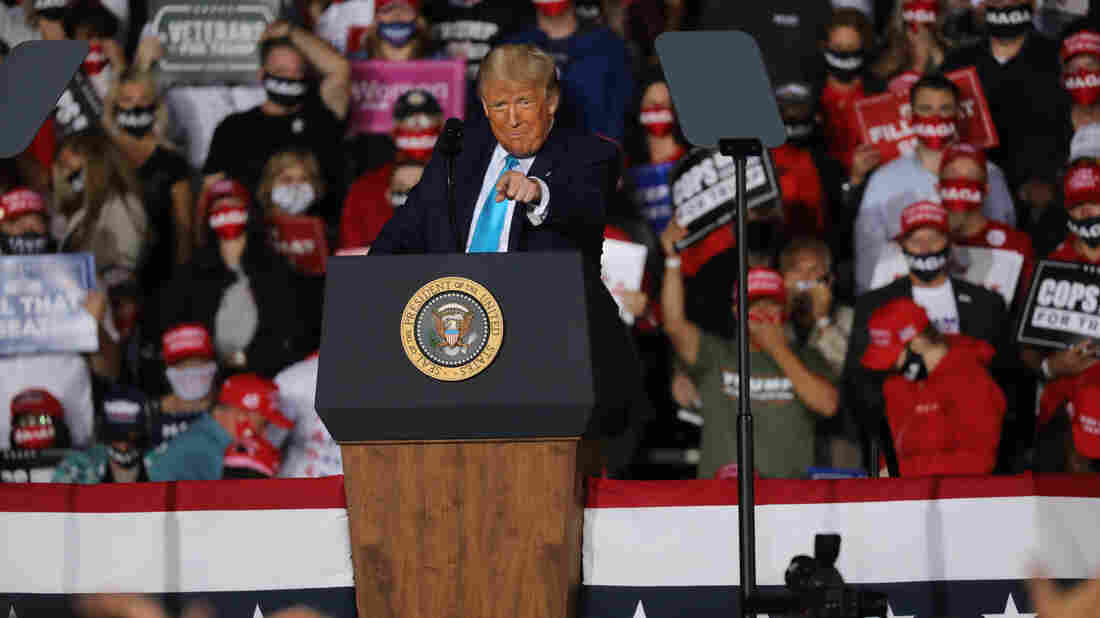 President Trump speaks at a rally at Harrisburg International Airport on Saturday in Middletown, Pa. The president has tested positive for the coronavirus, but it is unclear when he contracted it. Spencer Platt/Getty Images hide caption 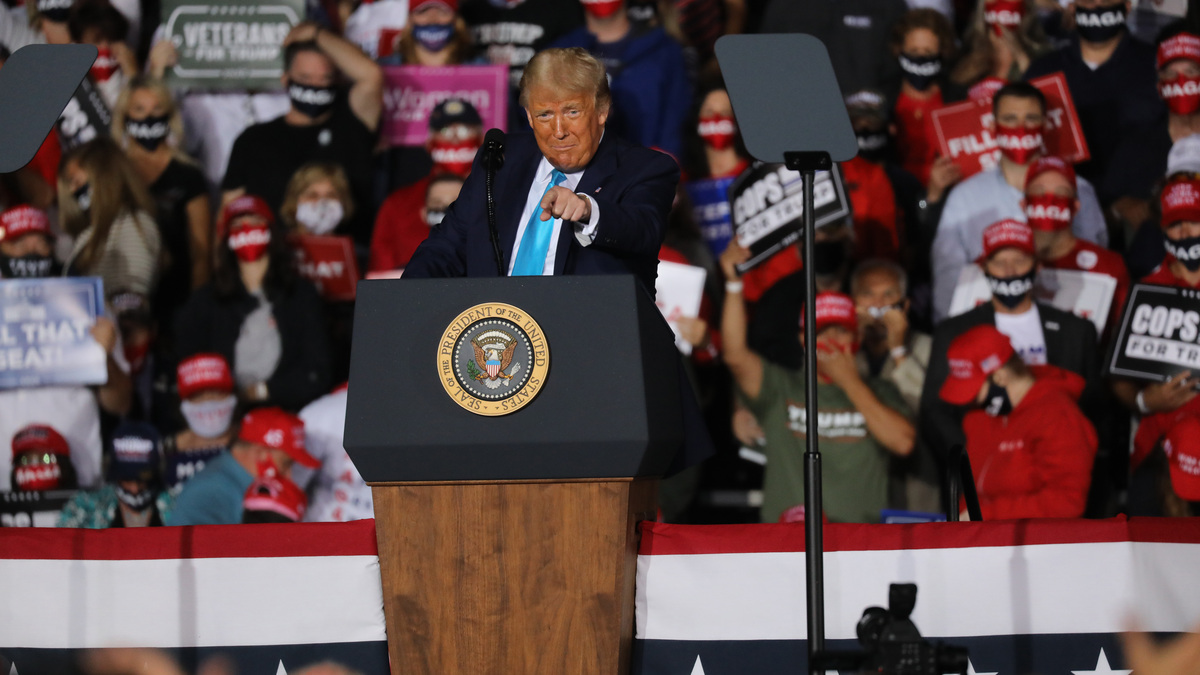 President Trump speaks at a rally at Harrisburg International Airport on Saturday in Middletown, Pa. The president has tested positive for the coronavirus, but it is unclear when he contracted it.

President Trump and first lady Melania Trump have tested positive for the coronavirus amid a busy week of events and during the height of the presidential campaign.

The president is expected to remain under watch of doctors at the White House but intends to continue carrying out his official duties.

The White House updated Trump's Friday schedule, canceling a campaign rally in Sanford, Fla. On Saturday he had planned to hold two rallies in Wisconsin, which is seeing a spike in cases.

The first lady said in a tweet that she has postponed "all upcoming engagements."

But the president's schedule over the past week was packed — from rallies in Florida and Pennsylvania to the presidential debate in Cleveland on Tuesday, where he shared the stage with former Vice President Joe Biden.

Trump has also been in close contact with White House officials, supporters and Supreme Court nominee Amy Coney Barrett within the past seven days. Vice President Pence has tested negative for the virus, as has Barrett, according to the White House.

Biden wished the Trumps a "swift recovery" on Friday, but it's not yet clear whether Biden was tested after the debate or in light of the news about the president.

It is still unclear when or how the president contracted the virus, though Trump confirmed Thursday night that close adviser Hope Hicks had tested positive.

Here are some of the places the president has been over the past week: 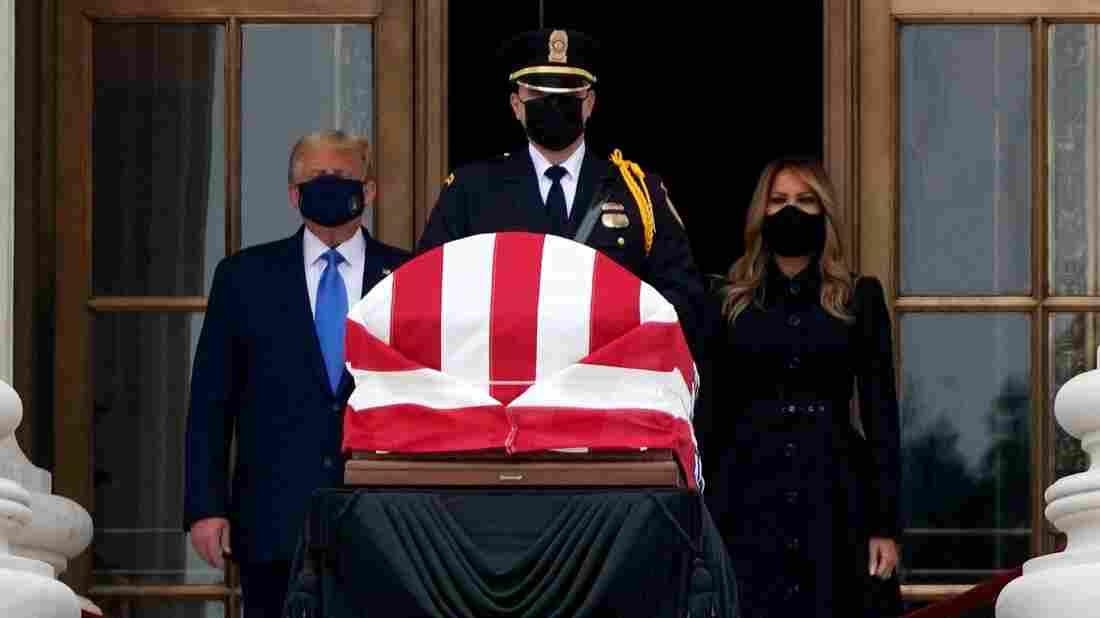 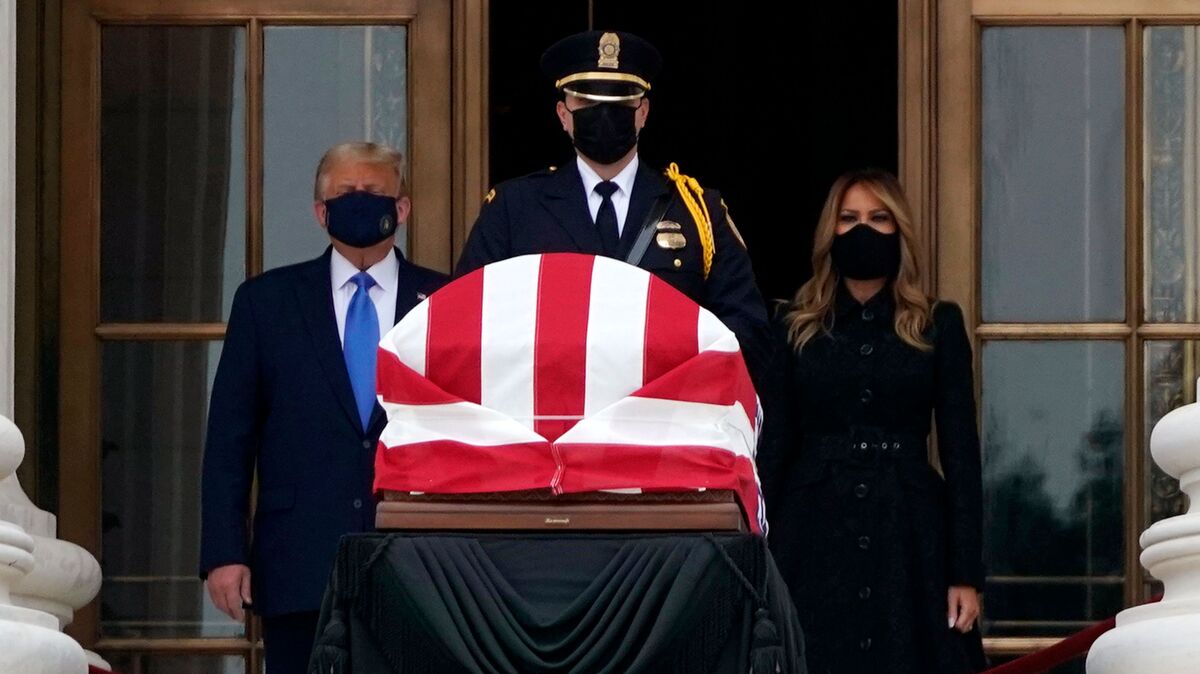 President Trump and first lady Melania Trump pay their respects to Supreme Court Justice Ruth Bader Ginsburg as she lies in repose in front of the Supreme Court on Sept. 24.

In the morning, the president and first lady paid respects to the late Justice Ruth Bader Ginsburg outside the Supreme Court before Trump traveled to Charlotte, N.C., to deliver a speech on health care. That evening, he held an outdoor rally at Cecil Airport in Jacksonville, Fla.

Friday, Sept. 25
The president attended a Latinos for Trump roundtable in Miami, a Black Economic Empowerment event in Atlanta, and a meeting with supporters in Washington, D.C. That night, he held a rally outside Newport News/Williamsburg International Airport in Virginia. 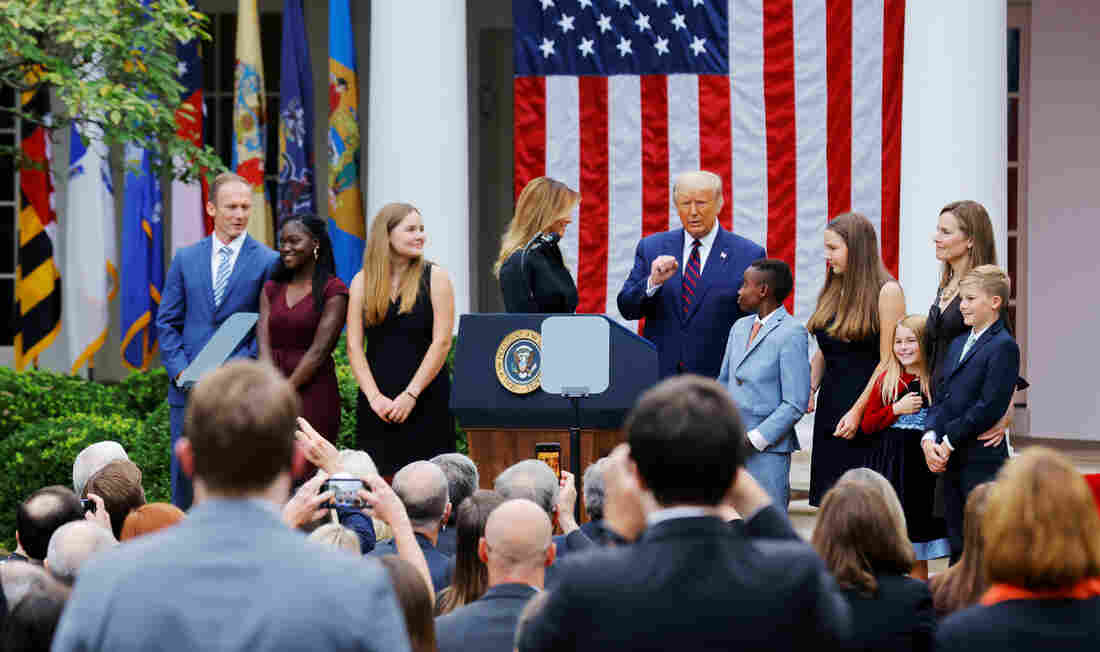 President Trump poses with Supreme Court nominee Amy Coney Barrett and her family at an event to announce her as his nominee on Saturday. Carlos Barria/Reuters hide caption 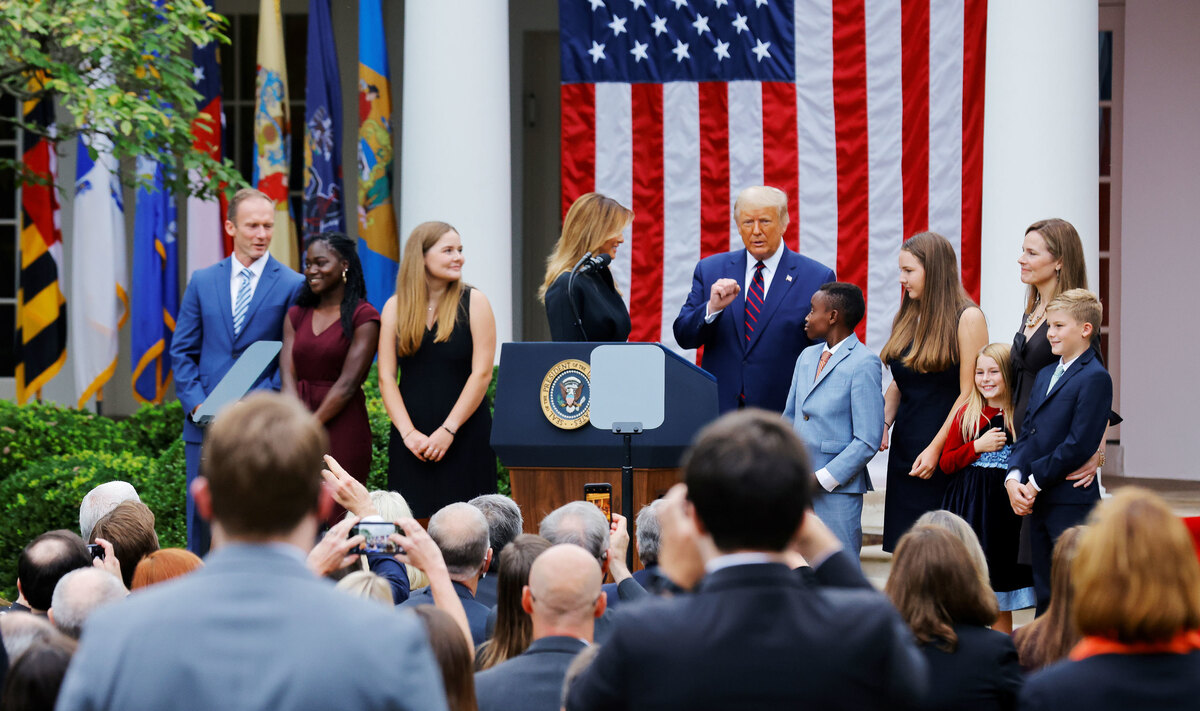 President Trump poses with Supreme Court nominee Amy Coney Barrett and her family at an event to announce her as his nominee on Saturday.

In a ceremony at the White House Rose Garden, the president announced his Supreme Court pick, Judge Amy Coney Barrett, in front of a crowd of about 200 people. (Since the ceremony, Judge Barrett has met with senators ahead of her confirmation hearing slated to begin Oct. 12 — including Senate Majority Leader Mitch McConnell, R-Ky.) That evening, the president held another rally at Harrisburg International Airport in Middletown, Pa.

Sunday, Sept. 27
The president's schedule included a visit to his golf club in Potomac Falls, Va., in the morning and a White House reception for Gold Star Families in the evening.

Monday, Sept. 28
Trump held two events at the White House: an address from the Rose Garden on national coronavirus testing strategy and another congratulating an Ohio-based manufacturer on a new vehicle. 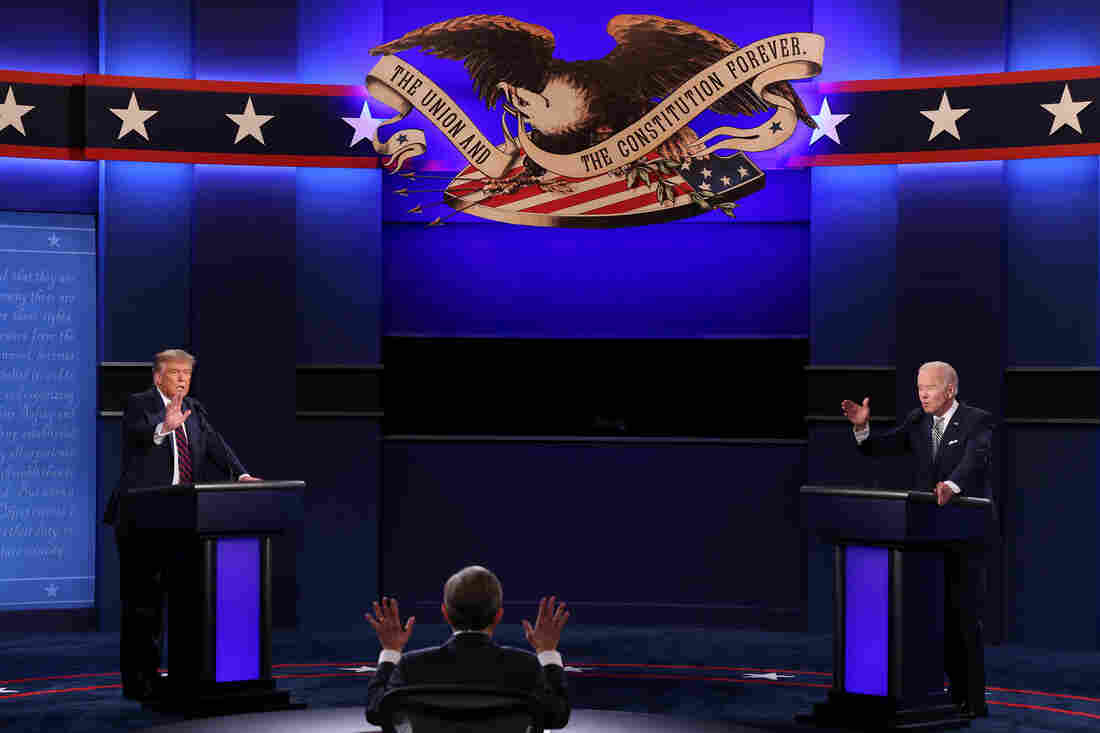 Trump and Biden faced off for the first time in a chaotic debate at Case Western Reserve University in Cleveland, where the two maintained social distance onstage and did not shake hands, but they did not wear masks onstage. During the debate, Trump said he wears a mask "when needed," citing frequent testing, and mocked Biden for having one "every time you see him."

Wednesday, Sept. 30
The president was in Minnesota for a fundraiser at a private residence in Shorewood before heading to a rally at Duluth International Airport that night.

Thursday, Oct. 1
The president hosted a fundraising event at the Trump National Golf Club in Bedminster, N.J. That evening, Trump confirmed reports that adviser Hicks had tested positive for the virus.