Accessibility links
Trump At Walter Reed Hospital After Positive Coronavirus Test : Live Updates: Trump Tests Positive For Coronavirus The president, who tested positive for the coronavirus, "has completed his first dose and is resting comfortably," physician Sean Conley said in a statement. 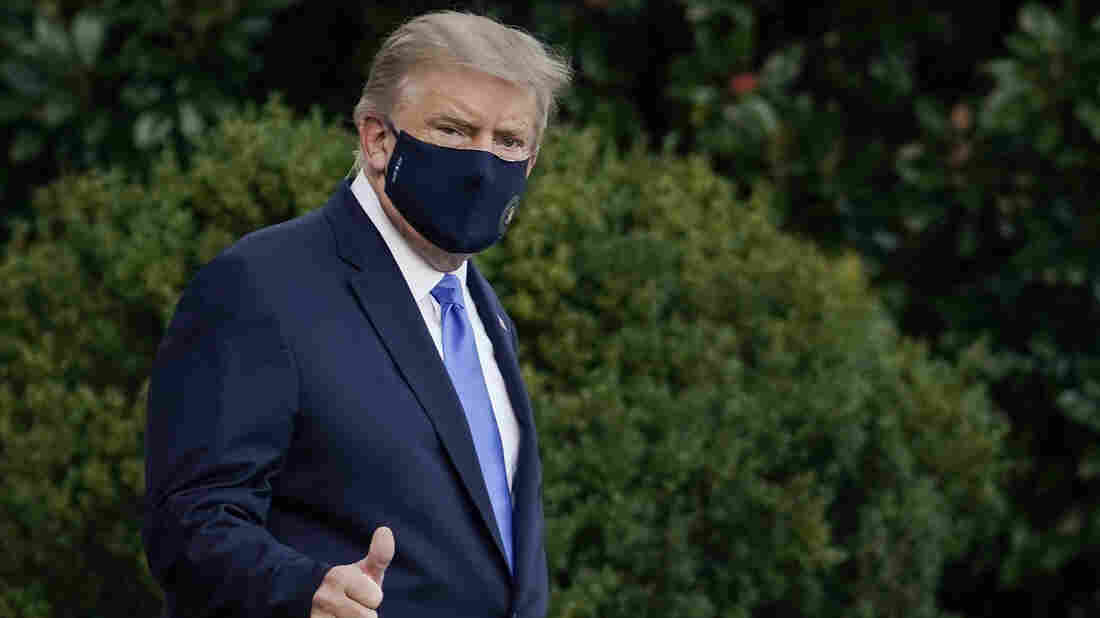 President Trump leaves the White House on Friday for Walter Reed National Military Medical Center, where he is expected to spend a few days "out of an abundance of caution." Drew Angerer/Getty Images hide caption 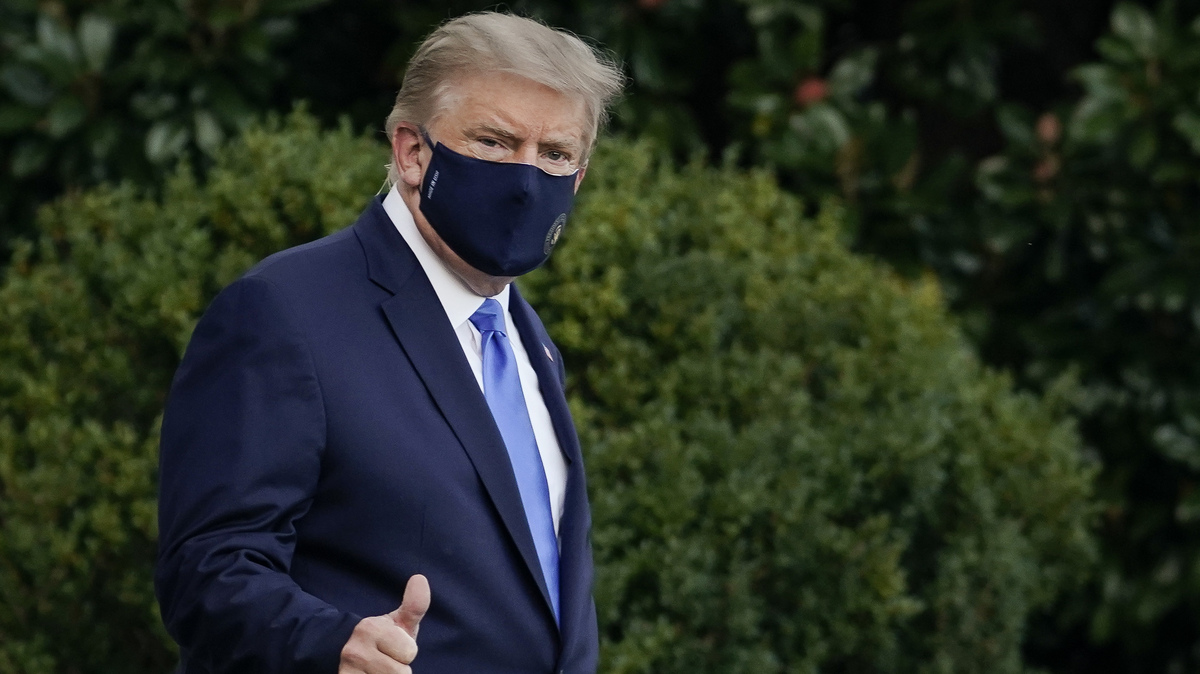 President Trump leaves the White House on Friday for Walter Reed National Military Medical Center, where he is expected to spend a few days "out of an abundance of caution."

Trump was taken to Walter Reed in Bethesda, Md., on Friday after testing positive for the coronavirus.

In a brief video message posted to Twitter about his trip to the hospital, Trump thanked his well-wishers for their support and said he feels that he's "doing very well" in spite of his positive test.

"I want to thank everybody for the tremendous support. I'm going to Walter Reed hospital. I think I'm doing very well, but we're going to make sure that things work out. The first lady is doing very well. So thank you very much, I appreciate it. I will never forget it. Thank you," Trump said in the 18-second video.

The message was the first tweet from Trump – who generally makes frequent use of the platform – since his announcement early Friday morning that he and first lady Melania Trump tested positive.

Press secretary Kayleigh McEnany said the president would be "working from the presidential offices at Walter Reed for the next few days" out of "an abundance of caution and at the recommendation of his physician and medical experts."

Trump "remains in good spirts, has mild symptoms, and has been working throughout the day," McEnany said.

Although the White House characterized Trump's symptoms as "mild," The New York Times reported Friday the president had developed a fever, nasal congestion and a cough.

The White House also provided a brief update on Trump's treatment Friday. Sean Conley, the president's physician, said that Trump received an experimental drug made by Regeneron, which contains two antibodies against the coronavirus.

The medicine is currently in clinical trials and isn't approved by the Food and Drug Administration. How the president's medical team got the medicine wasn't disclosed in the statement.

Trump Receives Experimental Drug For Covid-19. Here's What Doctors Are Watching For

In response to NPR's query about Trump's access to the treatment, Regeneron declined to comment specifically, citing patient confidentiality. But Regeneron said it can make the drug available outside a clinical trial through a "compassionate use program," subject to the approval of a review committee.

The drug, called REGN-COV2, is given as a single dose by injection (an infusion). The president received the high dose — 8 grams — being tested by the company.

The company released preliminary results this week from a test of patients treated outside hospitals. The study found that in patients whose bodies hadn't produced their own antibodies against the coronavirus, the medicine improved symptoms and lowered the amount of virus over time compared with a placebo.

Trump has for months downplayed the severity of the virus and promoted unfounded claims about experimental treatments, at times defying his own administration's public health guidance.

The president has often declined to wear masks in public, citing the frequency of testing for himself and those around him. The habit has contributed to the politicization of masks and has apparently trickled down to his supporters, many of whom at recent rallies have declined to wear masks at the packed, outdoor events.

An August Gallup survey found that Republicans were significantly less likely than Democrats and political independents to wear masks in both indoor and outdoor settings. 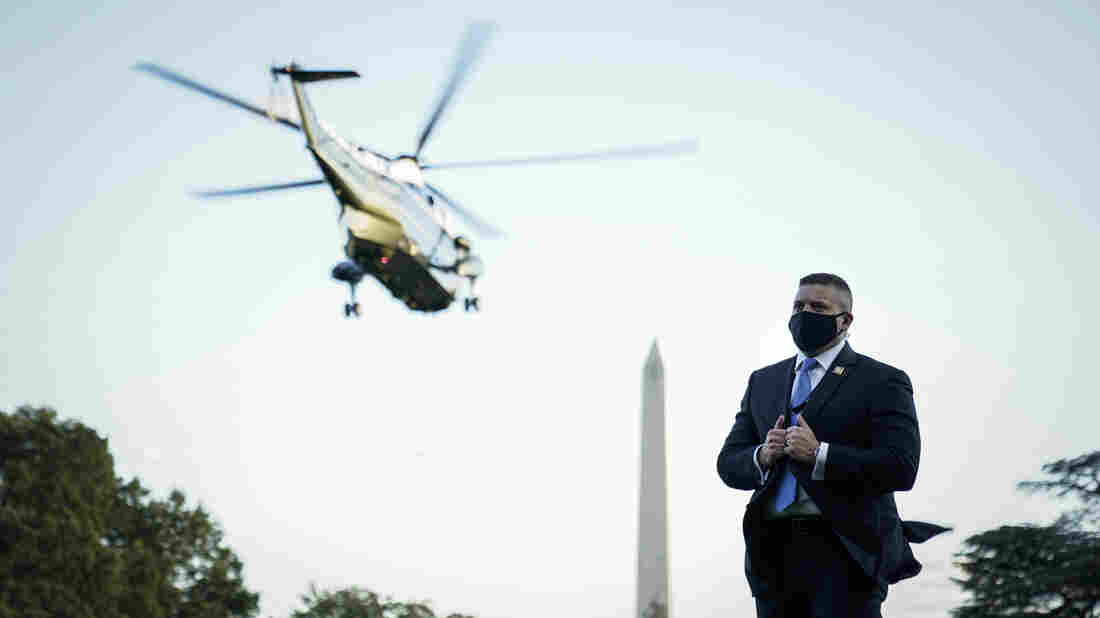 A U.S. Secret Service agent stands on the South Lawn of the White House as Marine One, with the president on board, leaves Friday for Walter Reed. Drew Angerer/Getty Images hide caption 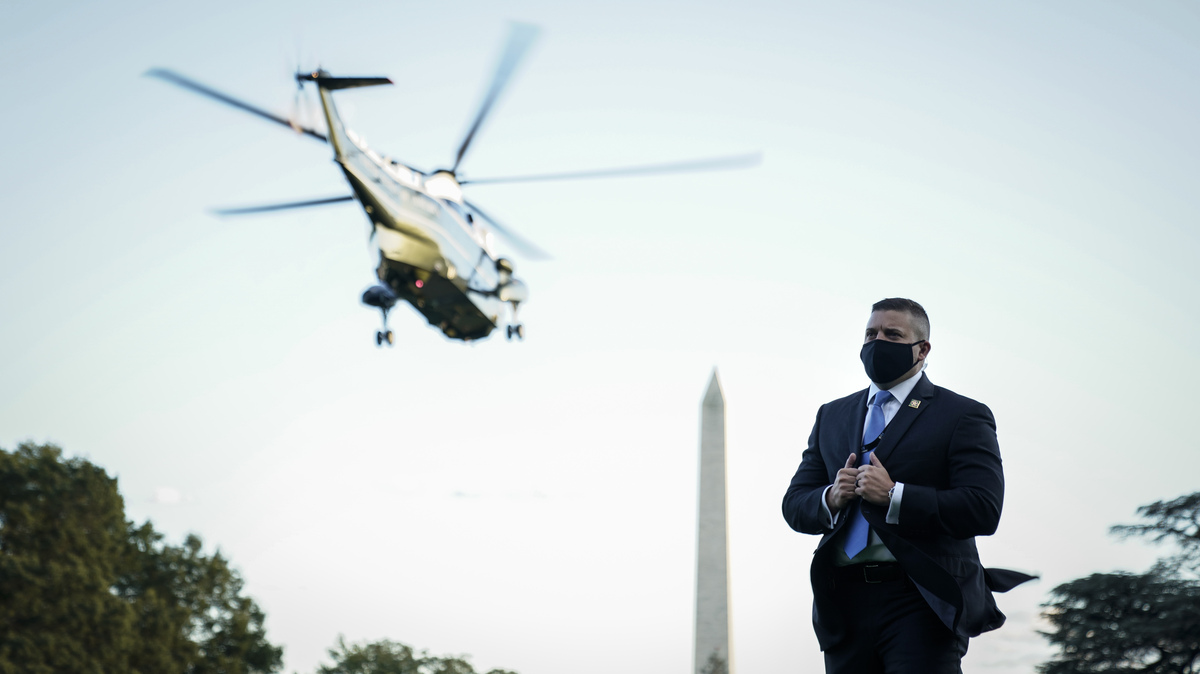 A U.S. Secret Service agent stands on the South Lawn of the White House as Marine One, with the president on board, leaves Friday for Walter Reed.

Robert Redfield, director of the Centers for Disease Control and Prevention, has said that face coverings are "one of the most powerful weapons we have to slow and stop the spread of the virus."

It is still unclear when or how the president contracted the virus. Others who have been in contact with the president recently have also tested positive — including the first lady, adviser Hope Hicks and Sen. Mike Lee, R-Utah.

Vice President Pence has tested negative, however, and is continuing with his normal activities, per the White House physician.