Accessibility links
Remdesivir Makes It Harder For Coronavirus To Spread Within The Body : Live Updates: Trump Tests Positive For Coronavirus President Trump is on day two of a planned 5-day course of remdesivir. The medication, approved for treating COVID-19, works by making it harder for the coronavirus to replicate within the body. 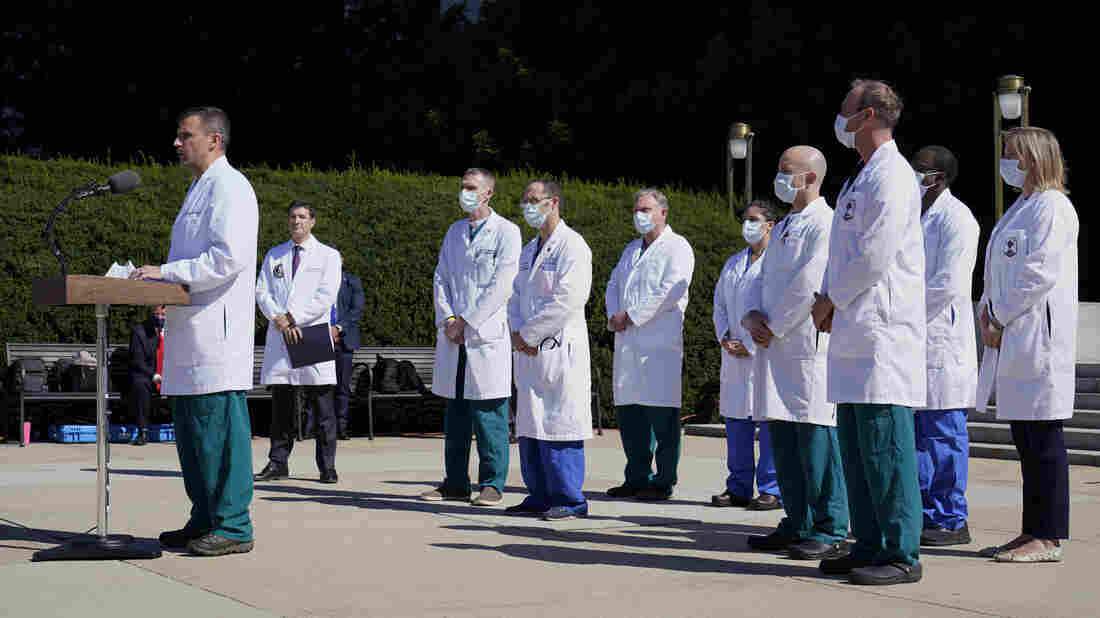 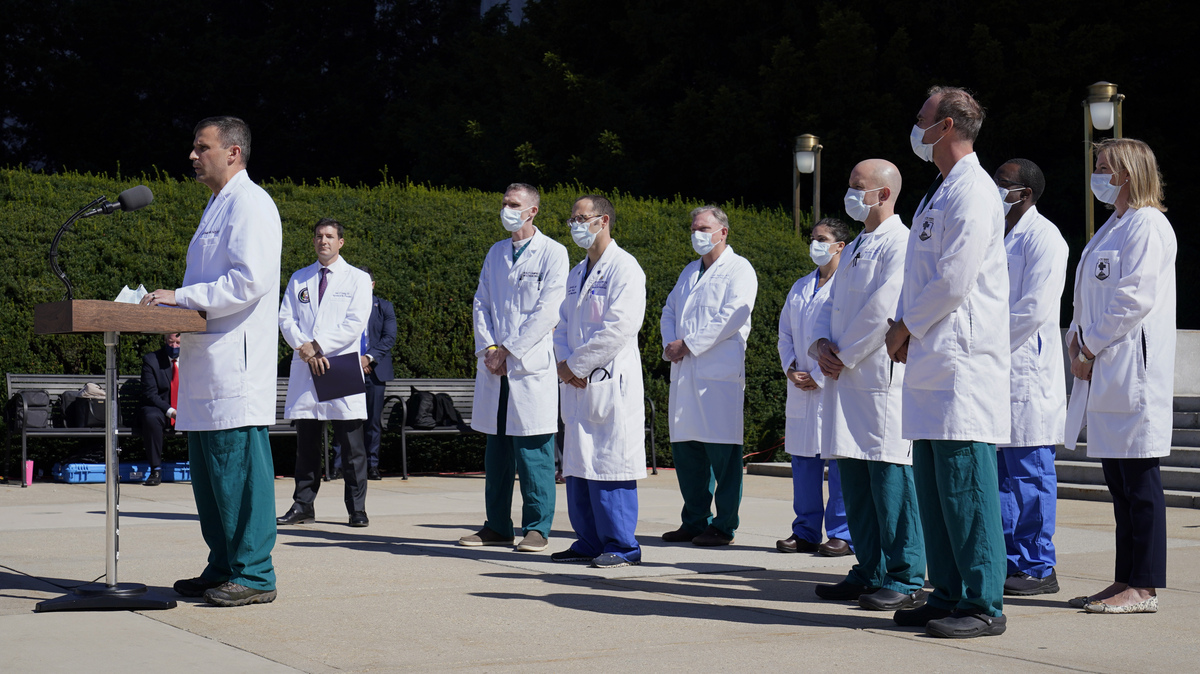 President Trump, hospitalized at Walter Reed National Military Medical Center in Maryland, is being treated with remdesivir, an antiviral drug made by Gilead Sciences. While the drug hasn't been approved by the Food and Drug Administration, it was authorized for emergency use in May for treating hospitalized patients with the coronavirus.

Trump received his first IV infusion of remdesivir on Friday night, and doctors say he'll undergo a five-day treatment course of the drug.

How does remdesivir work? By making it harder for the virus to replicate. Typically, when SARS-CoV-2 invades a cell, it releases a strand of RNA containing its genome — essentially, a genetic blueprint for replicating itself.

In order for the virus to make copies, its RNA needs to latch onto a cell's ribosome. That's a tiny cellular machine that lives in human cells and creates proteins. A single cell can contain millions of ribosomes, which, when things are working normally, help create the normal cells of the human body. But the coronavirus hijacks the ribosome, directing it to make copies of itself — and then copies of those copies.

Each compromised cell can create thousands of copies of the virus, which then infect nearby cells, where replication begins again.

As anyone who has used a Xerox machine knows, when you make copies of a copy, the new copies can get harder to read. A similar phenomenon takes place within the cell, and so normally, new copies of a virus can contain mutations.

One reason coronaviruses are so good at proliferating throughout the body is because they carry a special "proofreading" protein that catches the errors, helping the virus replicate itself correctly.

That's where remdesivir comes in. It helps control the coronavirus by disrupting its proofreading process. To the coronavirus, remdesivir looks like a natural part of the human cell. But when remdesivir gets stitched into the new replicated virus, it gums up the works.

"Now the virus is making a lot of rotten genomes that poison the viral replication process," geneticist Judith Frydman explained this summer to Stanford Medicine.

Remdesivir isn't a perfect copy-blocking machine, but it works well enough to slow the release of the virus and help give the body's immune system a better chance at fighting the invaders. For those who need hospitalization, a 5- to 10-day course of remdesivir has been shown to improve results and reduce hospital stays by a few days.

A study published in the New England Journal of Medicine found that patients receiving remdesivir recovered in 11 days, compared with 15 days for those who received a placebo. However, that study found the medication to be most effective for hospitalized patients with severe disease requiring supplemental oxygen.

The president's doctors said Saturday that he was not on supplemental oxygen "right now," but declined to say whether he had been previously.

Along with remdesivir, Trump is also taking an experimental "antibody cocktail" by the drugmaker Regeneron. In an ongoing trial, the drug — known as REGN-COV2 — has been shown to reduce viral load in the body, as well as the duration of symptoms. Patients given a placebo generally took 13 days to see their symptoms reduced, while those given the cocktail saw results in about half the time. That trial has not examined the interplay between the cocktail and remdesivir.

Doctors said that the president is doing well, with no difficulty breathing. "I feel like I could walk out of here today," Trump told the staff, according to Dr. Sean Dooley, one of the president's doctors. However, a source familiar with the president's health later told White House reporters that "the president's vitals over the last 24 hours were very concerning."

"The next 48 hours will be critical in terms of his care," the source said. "We're still not on a clear path to a full recovery."