Accessibility links
Timeline: What We Know Of President Trump's COVID-19 Diagnosis, Treatment : Live Updates: Trump Tests Positive For Coronavirus President Trump first tweeted that he had tested positive for the coronavirus early Friday morning. But questions remain about what exactly happened before and after. 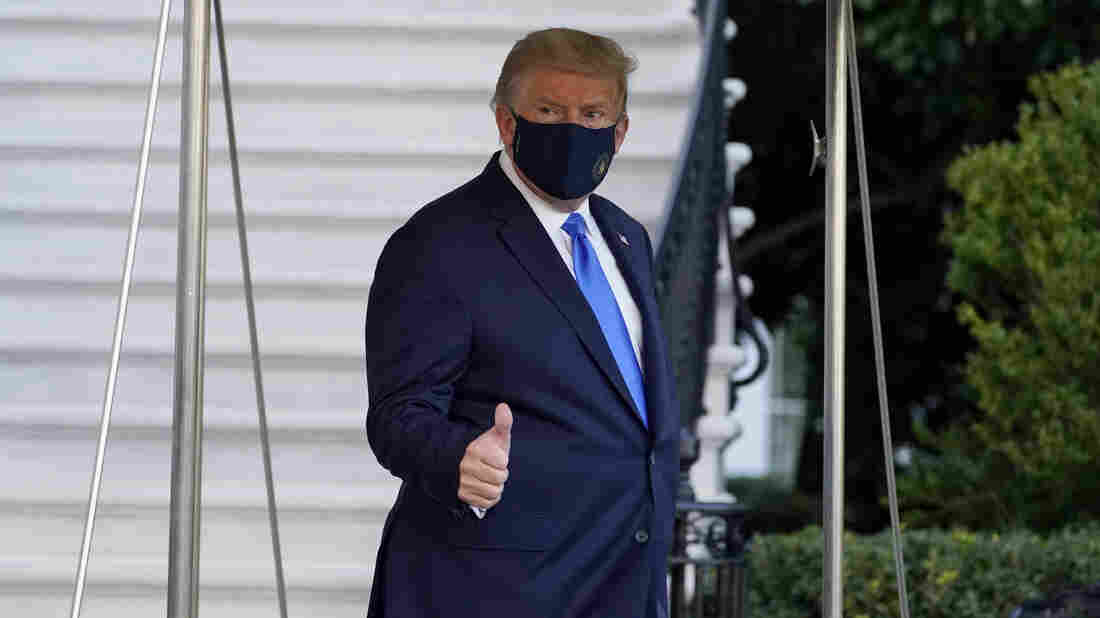 President Trump gives a thumbs-up as he leaves the White House to go to Walter Reed National Military Medical Center on Friday after he tested positive for the coronavirus. Alex Brandon/AP hide caption 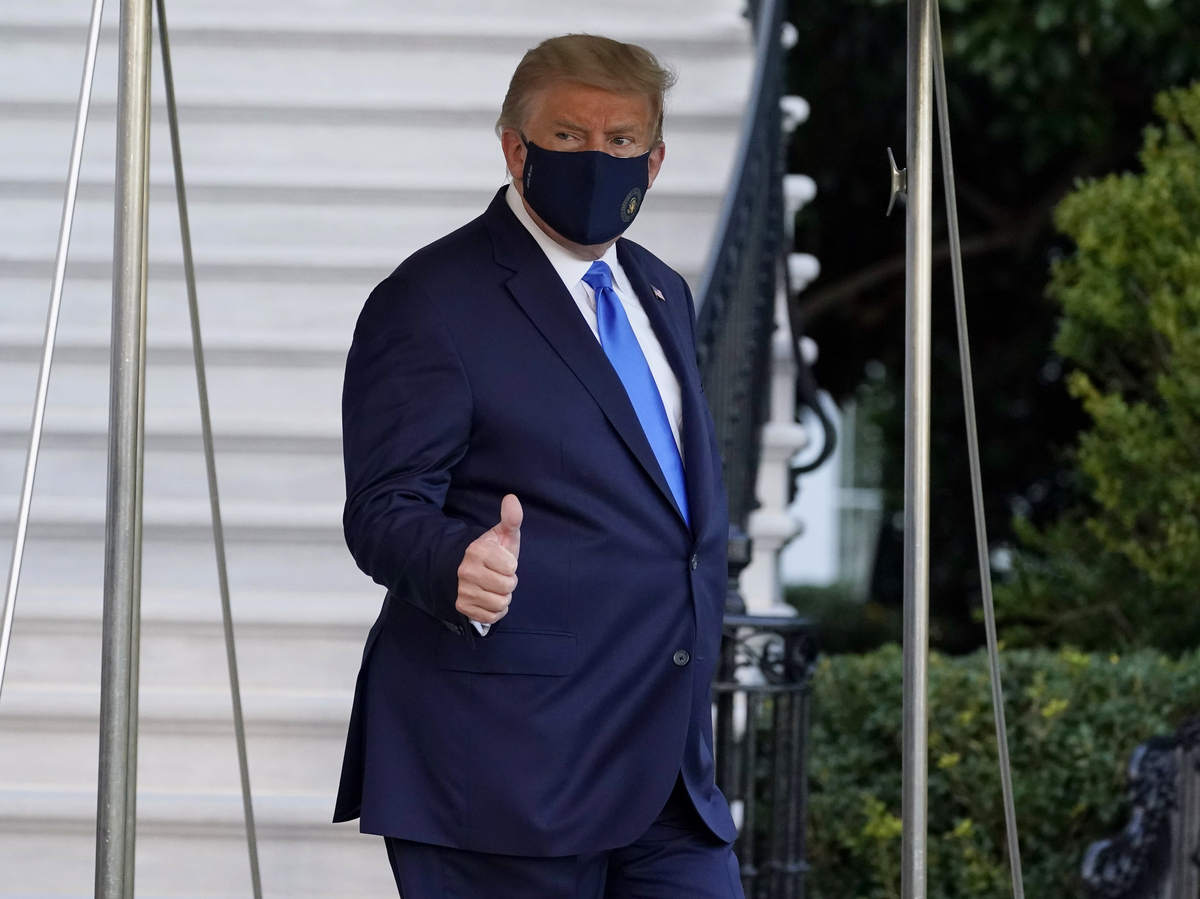 President Trump gives a thumbs-up as he leaves the White House to go to Walter Reed National Military Medical Center on Friday after he tested positive for the coronavirus.

Trump announced early Friday morning that he and the first lady had tested positive for the coronavirus, and he was taken to Walter Reed Friday evening.

The rest of the timeline, as laid out by White House officials and Trump's physician, Sean Conley, has at times been unclear. Here's what we know about what happened when:

Trump hosted a ceremony in the White House Rose Garden to announce his nominee for the U.S. Supreme Court, Amy Coney Barrett. Guests, many without masks, packed into the outdoor space, and some were also photographed together indoors. (The White House has coronavirus testing protocols for guests and members of the press.)

At least eight people who attended the ceremony, including the president and the first lady, have since tested positive for the coronavirus.

Later that night, Trump flew to Pennsylvania for an outdoor rally.

Trump attended the presidential debate in Cleveland. Members of the Trump family and other guests of the president did not wear masks in the debate venue, despite being asked to by Cleveland Clinic staff.

Debate moderator Chris Wallace said on Fox on Friday that Trump wasn't tested before attending the debate because he arrived late. Instead, organizers relied on the honor system, he said.

Democratic nominee Joe Biden and his group at the debate have all tested negative so far. 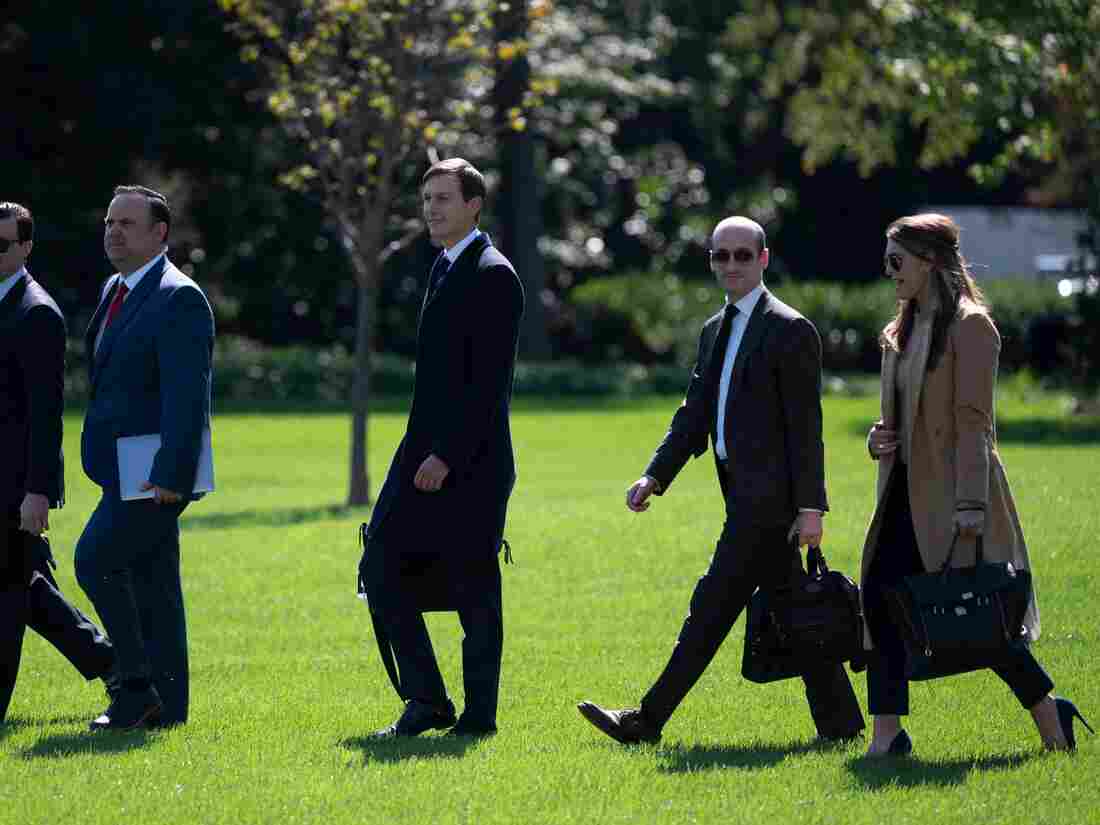 Hope Hicks and other White House staffers walk to Marine One to depart from the South Lawn of the White House on Wednesday. Andrew Caballero-Reynolds/AFP via Getty Images hide caption 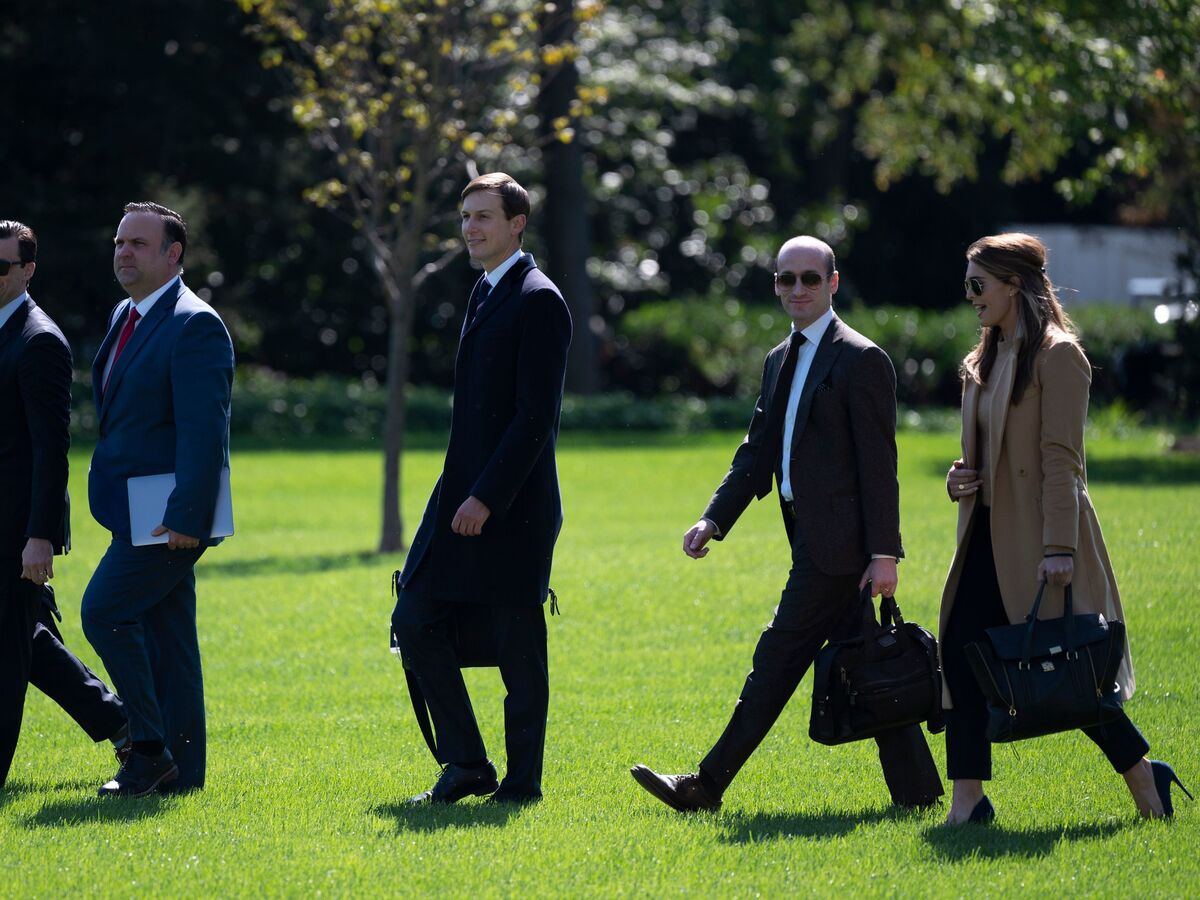 Hope Hicks and other White House staffers walk to Marine One to depart from the South Lawn of the White House on Wednesday.

Trump flew to Minnesota for a fundraiser and an outdoor rally.

Hope Hicks, one of Trump's closest aides, reportedly started to feel unwell and tried to isolate on the Air Force One ride back to Washington.

(On Saturday, White House physician Conley said it had been 72 hours since the president's diagnosis — which would mean midday on Wednesday. Conley later said he had made a mistake, that he meant to say Saturday had been Day 3 of the diagnosis.)

That afternoon, Trump flew to New Jersey for an indoor fundraiser at which few people wore masks.

(At Saturday's press conference, Dr. Brian Garibaldi said the president began an experimental antibody therapy "about 48 hours ago." That would place the beginning of that treatment at midday on Thursday. Conley has also walked that time reference back, saying Regeneron was administered late Thursday.)

That night, Bloomberg News reported that Hicks had been confirmed positive for the coronavirus. In a phone interview on Fox News shortly after, Trump said he and first lady Melania Trump had been tested and were awaiting the results.

Hope Hicks, who has been working so hard without even taking a small break, has just tested positive for Covid 19. Terrible! The First Lady and I are waiting for our test results. In the meantime, we will begin our quarantine process!

Doctors have said Trump had a fever "Thursday into Friday," but didn't say how high it was.

Shortly after 1 a.m., Trump tweeted that he and his wife had tested positive for the coronavirus. White House press secretary Kayleigh McEnany told Fox News Trump had announced his coronavirus test result within an hour of receiving it.

That morning, Melania Trump tweeted that she had mild symptoms, but overall was feeling good.

Tonight, @FLOTUS and I tested positive for COVID-19. We will begin our quarantine and recovery process immediately. We will get through this TOGETHER!

That afternoon, around 4 p.m. ET, the White House announced that the president had received a dose of Regeneron, the experimental drug cocktail that has shown promising results improving coronavirus symptoms.

Conley wrote that Trump was "fatigued but in good spirits."

After 6 p.m. ET, Trump left the White House via helicopter for Walter Reed. The president tweeted a video of himself recorded earlier in the White House thanking supporters for their well wishes. He gave a thumbs-up to reporters as he walked to Marine One.

Throughout the day, additional people who had been in the president's orbit, including Republican members of the U.S. Senate, disclosed positive test results.

Just before midnight, the president's physician released a letter saying Trump had started his first dose of remdesivir therapy.

Doctors later said Trump had a fever Friday morning but not the rest of the day, and that he received supplemental oxygen early Friday. 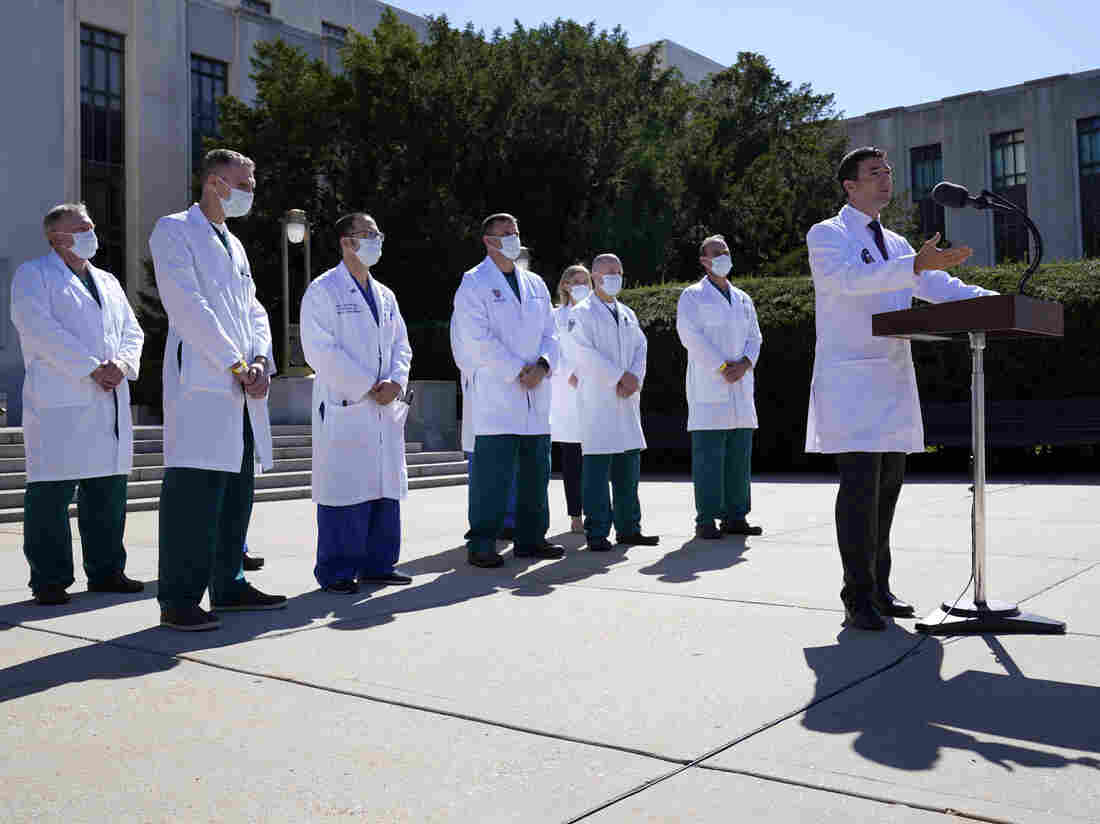 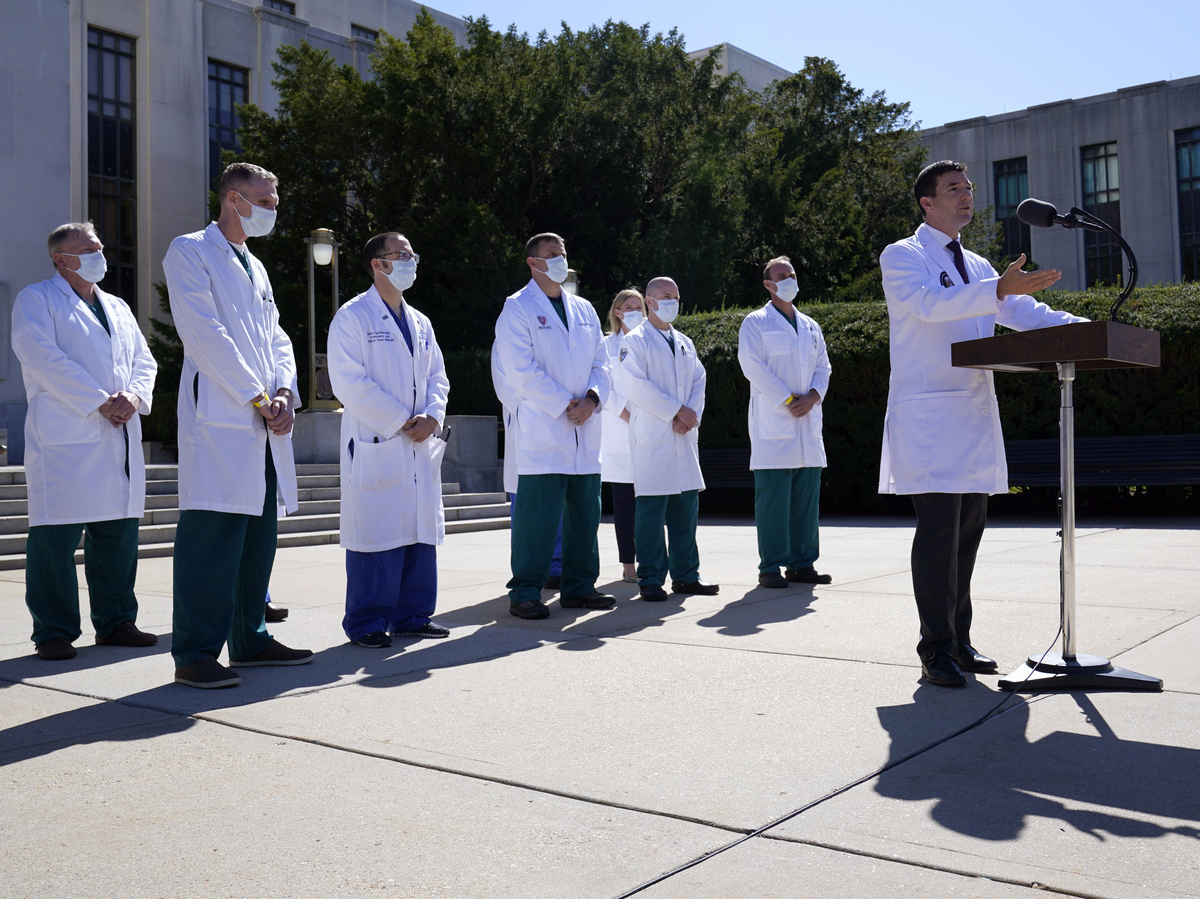 Conley and doctors at Walter Reed briefed the press Saturday morning. Conley said that he was "extremely happy" with the progress being made and that Trump's fatigue and mild cough were improving. He said Trump had been fever free for 24 hours.

However, a White House official then took a less rosy tone, telling pool reporters that "the president's vitals over the last 24 hours were very concerning and the next 48 hours will be critical in terms of his care. We're still not on a clear path to a full recovery."

The Associated Press identified that information as coming from Meadows.

At the Saturday news conference, Conley was evasive on whether Trump had received supplemental oxygen and, as previously noted, offered a timeline that he later had to walk back. (Trump was diagnosed and began receiving treatment Thursday night, the White House says.)

Trump fired off a tweet not too long after, saying he was "feeling well."

Doctors, Nurses and ALL at the GREAT Walter Reed Medical Center, and others from likewise incredible institutions who have joined them, are AMAZING!!!Tremendous progress has been made over the last 6 months in fighting this PLAGUE. With their help, I am feeling well!

The White House said Friday that Trump would be at Walter Reed for a "few days." On Saturday, doctors said that they were evaluating his condition each day and that if he needs the full five-day course of remdesivir, he would stay at Walter Reed to receive it.

Meadows told Fox's Jeanine Pirro Saturday evening that concerns over whether Trump would be able to fulfil his duties after contracting the virus were "irrational."

Meadows added that on Friday morning, "A number of us, the doctor and I, were very concerned."

That's a markedly different picture from the one Meadows painted Friday morning, when he told reporters that the president was showing "mild symptoms."

Conley and doctors at Walter Reed briefed the press Sunday morning, sharing that Trump experienced two drops in his oxygen levels: once on Friday and again Saturday.

Conley said Trump had a high fever and saw his oxygen levels fall while at the White House on Friday morning ahead of being moved to Walter Reed.

The medical team detailed the president's treatment plan, which includes the steroid dexamethasone, of which Trump received the first dose on Saturday, along with a five-day treatment course of remdesivir.

"If he continues to look and feel as well as he does today our hope is that we can plan for a discharge as early as tomorrow to the White House where he can continue his treatment course," Dr. Brian Garibaldi said.

Conley addressed the conflicting comments between him and Meadows on Saturday, saying the chief of staff's statement was "misconstrued."

"What he meant was that 24 hours ago, when he and I were checking on the president, that there was that momentary episode of the high fever and that temporary drop in the saturation, which prompted us to act expediently to move him up here," Conley said.

When asked why he was reluctant during Saturday's briefing to disclose that Trump had been administered oxygen, Conley said he was trying to "reflect the upbeat attitude" of the medical team and the president.

"I didn't want to give any information that might steer the course of illness in another direction," he said. "And in doing so, you know, it came off that we were trying to hide something, which wasn't necessarily true. The fact of the matter is, is that [Trump's] doing really well."

Sunday evening, press secretary Kayleigh McEnany told reporters that Trump's first positive test for the coronavirus was received after he returned from the Thursday trip to Bedminster, N.J.

She would not comment on whether he was tested before the presidential debate in Cleveland on Tuesday, on Wednesday night or on Thursday morning.

"I'm not going to give you a detailed readout with timestamps of every time the president is tested. He is tested regularly, and the first positive test he received was after his return from Bedminster," McEnany said.

President Trump tweeted Monday afternoon that he will leave Walter Reed at 6:30p.m. His doctors confirmed in a briefing to the press that the president would be discharged from the facility and complete his treatment regimen at the White House.

Dr. Conley said that while Trump may not be "entirely out of the woods yet," he believes he is ready to get his care at the White House.

"He's returning to a facility, the White House medical unit, that's staffed 24/7: top notch physicians, nurses, PAs, logisticians, and the unit here...is going to continue to support us in that nature."

Dr. Garibaldi said the medical team had made plans for Trump to receive the fifth and final dose of remdesivir at the White House Tuesday night.

Conley said Trump had not been on any fever reducing medications for more than 72 hours and that his breathing is normal.

He declined again to go into detail regarding the president's lung scans, citing patient privacy regulations, and refused to say when Trump's last negative coronavirus test was, saying, "I don't want to go backwards."

He also would not comment on Trump's tweet, which instructed people not to be afraid of the coronavirus, a striking statement as the American death toll climbs past 209,000.

Wearing a white mask, he paused on the steps and pumped his fist in the air. When he returned to the White House, he walked up the staircase of the South Portico entrance, removed his mask, gave reporters a thumbs-up and saluted Marine One.

In a previous version of this story, we incorrectly said Mark Meadows described the president's symptoms as "mild" on Monday morning. He made that statement to reporters on Friday morning.