Accessibility links
Sunday News Conference On Trump's Coronavirus Treatment : Live Updates: Trump Tests Positive For Coronavirus President Trump has experienced two drops in his oxygen levels over the course of his COVID-19 diagnosis, his medical team said Sunday, but that he "has continued to improve." 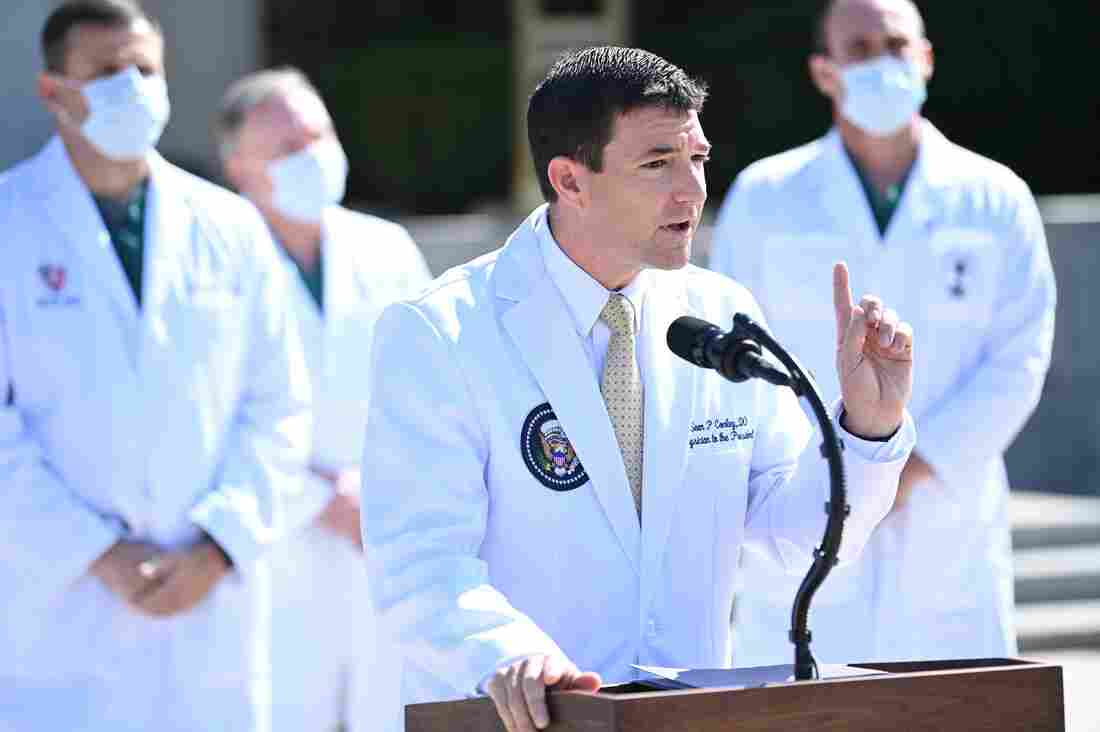 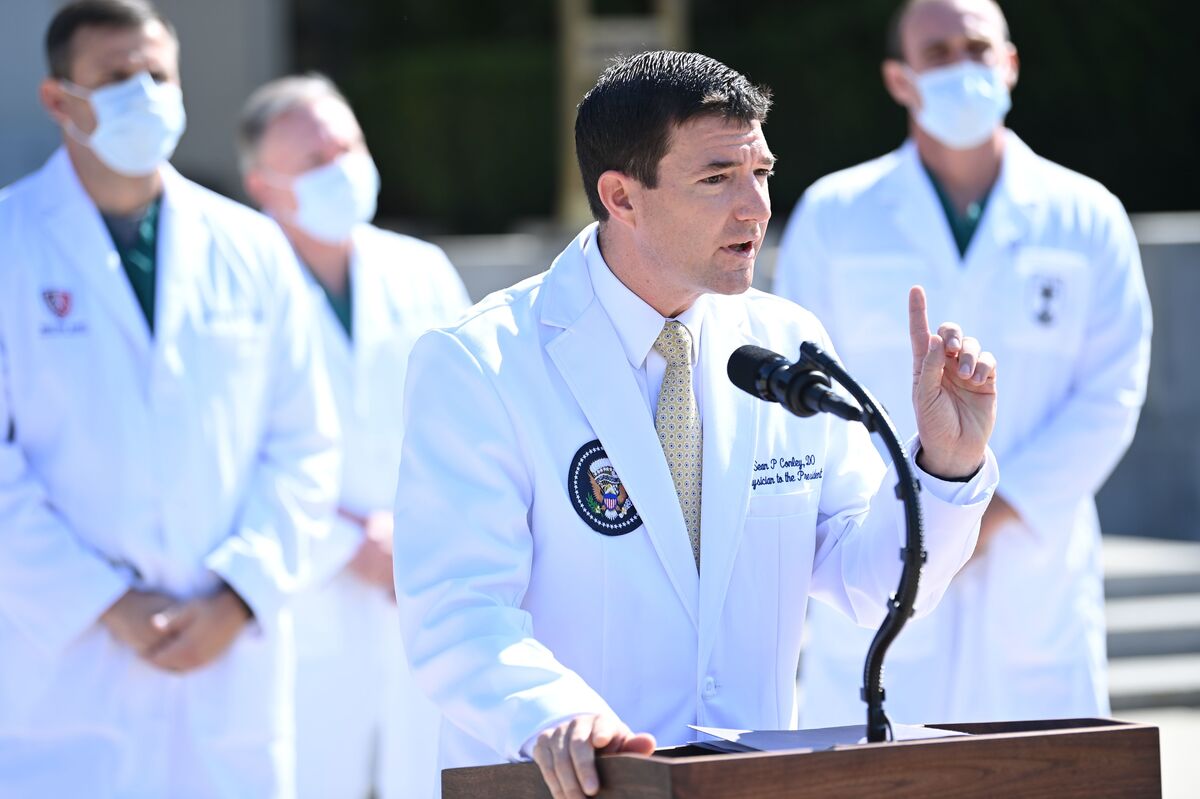 President Trump sought to project an image of vigor in the face of COVID-19, with a surprise motorcade Sunday outside Walter Reed National Military Medical Center, where he is being treated, as his physicians suggested he could be discharged to return to the White House as early as Monday.

The president was admitted to Walter Reed on Friday, hours after announcing that he and the first lady had tested positive for the coronavirus.

On Sunday, the president — masked and waving from the back seat of a black SUV — was briefly driven past supporters gathered outside the compound after promising in a video "a little surprise to some of the great patriots that we have out on the street."

While the crowd of well-wishers delighted in a glimpse of the president, others criticized the impromptu motorcade as "political theater" that needlessly exposed others for the sake of a photo-op.

That Presidential SUV is not only bulletproof, but hermetically sealed against chemical attack. The risk of COVID19 transmission inside is as high as it gets outside of medical procedures. The irresponsibility is astounding. My thoughts are with the Secret Service forced to play.

"That Presidential SUV is not only bulletproof, but hermetically sealed against chemical attack. The risk of COVID19 transmission inside is as high as it gets outside of medical procedures," Dr. James Phillips, chief of disaster medicine at George Washington University and an attending physician at Walter Reed, tweeted. "The irresponsibility is astounding. My thoughts are with the Secret Service forced to play."

"As with any illness, there are frequent ups and downs, particularly when a patient is being so closely watched 24 hours a day," he said.

Transcript: Sunday Update On Trump's Health From His Doctors

Conley explained that the president experienced a high fever and falling oxygen levels at the White House Friday morning. "I recommended [to] the president we try some supplemental oxygen, see how he'd respond."

"He was fairly adamant that he didn't need it," he said. "He was not short of breath; he was tired, had the fever, and that was about it. After about a minute on only 2 liters, his saturation levels were back over 95%. He stayed on that for about an hour."

Inexpensive Steroids Can Save Lives Of Seriously Ill COVID-19 Patients

When asked whether any signs of pneumonia are apparent on the president's X-rays and scans, Conley said, "There's some expected findings but nothing of any major clinical concern."

Trump also received his first dose of the steroid dexamethasone on Saturday, with Conley saying the potential benefits of the treatment outweigh the risks. His care plan also includes a five-day course of remdesivir, which Dr. Brian Garibaldi said the president "tolerated well."

"If he continues to look and feel as well as he does today, our hope is that we can plan for a discharge as early as tomorrow to the White House, where he can continue his treatment course," Garibaldi said at the Sunday briefing.

A similar news conference on Saturday led to more questions, with Conley presenting a timeline to reporters of Trump's diagnosis that was quickly walked back by the White House. A senior administration official — later identified by The Associated Press as Chief of Staff Mark Meadows — contradicted Conley, telling reporters the president's vitals were "very concerning," and that the president was "still not on a clear path to a full recovery."

Conley said Sunday that the statement by Meadows had been "misconstrued."

Timeline: What We Know Of President Trump's COVID-19 Diagnosis

Asked why he was reluctant during Saturday's briefing to disclose that Trump had been administered oxygen, Conley said he was trying to "reflect the upbeat attitude" of the medical team and the president.

"I didn't want to give any information that might steer the course of illness in another direction," he said. "And in doing so, you know, it came off that we're trying to hide something, which wasn't necessarily true. The matter is, is that [Trump's] doing really well."

White House communications director Alyssa Farah expanded on Conley's comments, telling Fox News on Sunday that he was projecting confidence in order to help his patient.

The president himself tweeted a video Saturday evening in which he said: "I came here, wasn't feeling so well. I feel much better now."

But echoing Meadows, Trump added: "You don't know, over the next period of a few days — I guess that's the real test, so we'll be seeing what happens over those ... next couple of days."