Accessibility links
Faith Leaders Reflect On The Proper Response To Trump's Illness : Live Updates: Trump Tests Positive For Coronavirus Even harsh critics of the president have been careful not to wish him ill, and some religious leaders hope he gains wisdom from his experience.

Faith Leaders Reflect On The Proper Response To Trump's Illness

Faith Leaders Reflect On The Proper Response To Trump's Illness 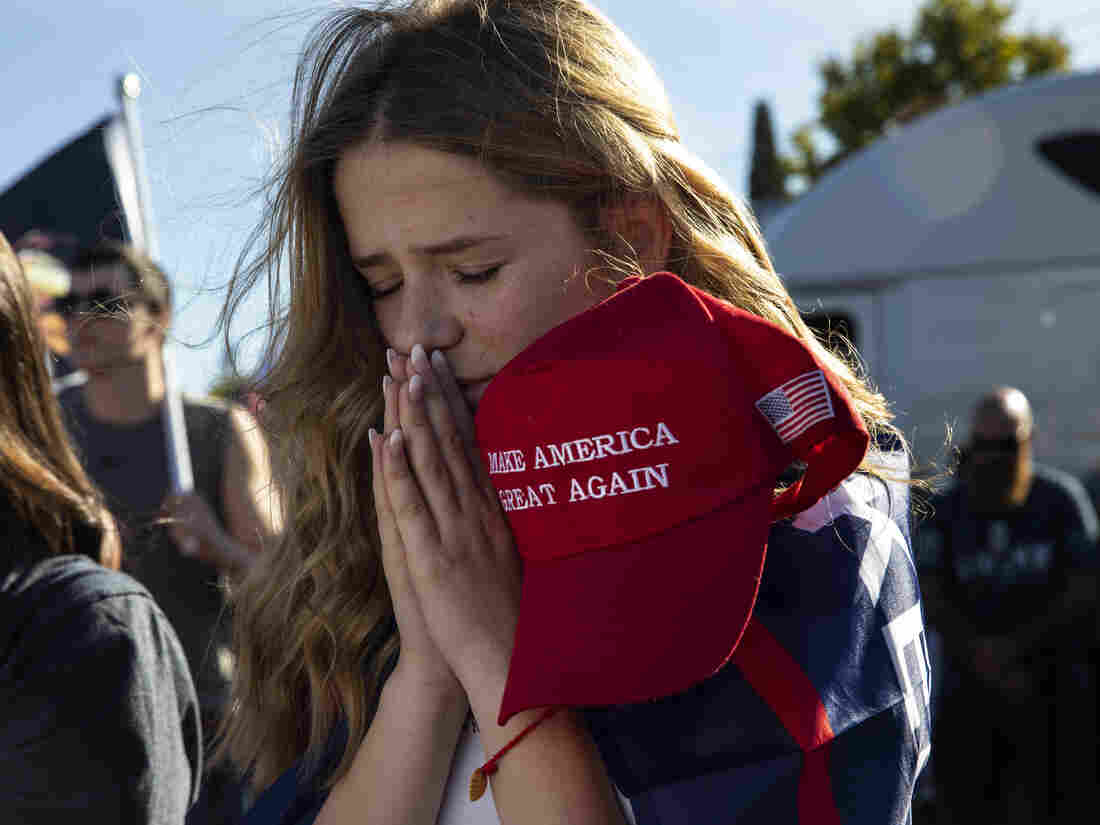 Religious leaders urge people of faith to pray for political leaders, both in general and when those elected officials are ill, even if people disagree with those leaders' policies. Paula Bronstein/AP hide caption 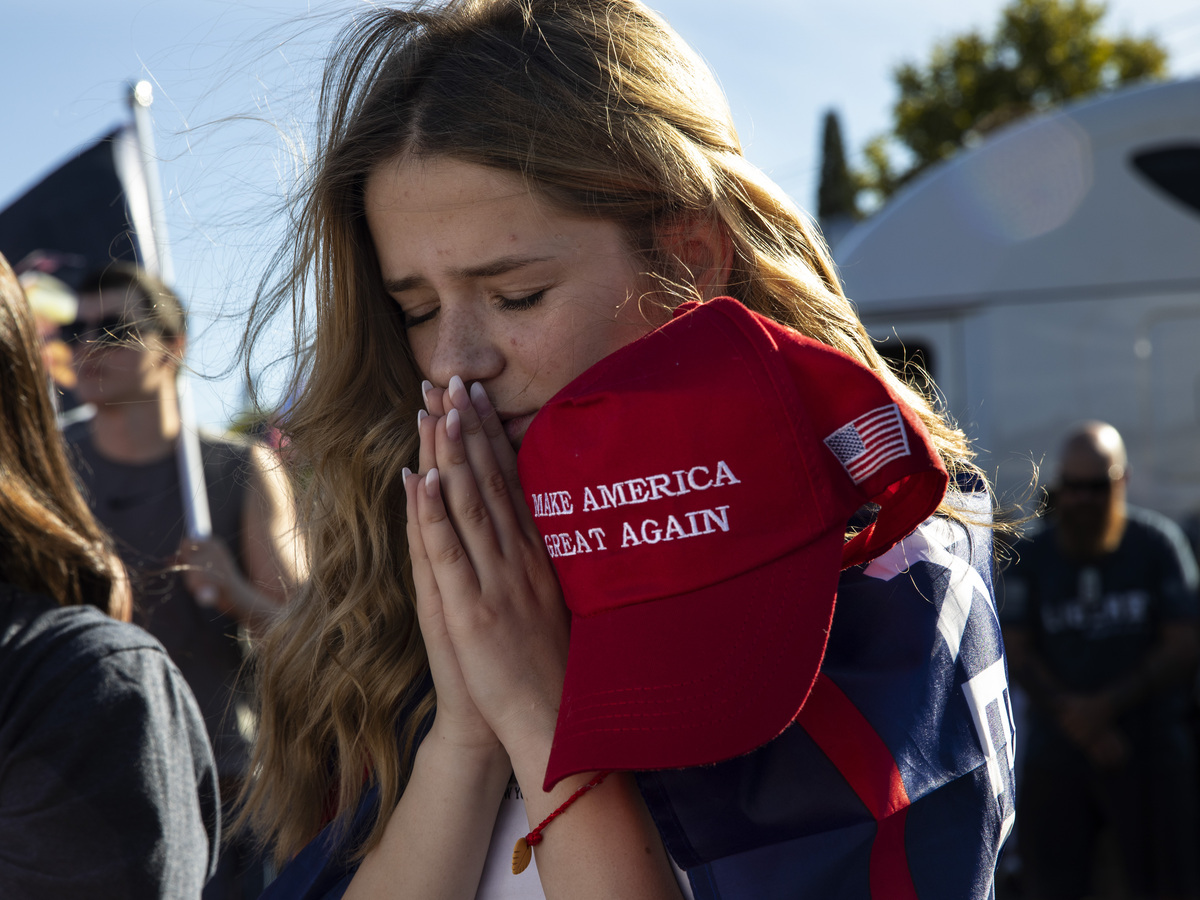 Religious leaders urge people of faith to pray for political leaders, both in general and when those elected officials are ill, even if people disagree with those leaders' policies.

Within minutes of President Trump's announcement that he and his wife, Melania, had tested positive for the coronavirus, he got a compassionate message from one of his harshest critics.

Rachel Maddow of MSNBC tweeted, "God bless the president and the first lady. If you pray, please pray for their speedy and complete recovery. ... This virus is horrific and merciless – no one would wish its wrath on anyone."

Maddow's message was unsurprising. Public figures are often careful to wish their adversaries well when they fall ill, and clergy of various religious traditions routinely ask their followers to pray for their leaders during times of crisis. Trump's coronavirus infection was no exception.

God bless the president and the first lady. If you pray, please pray for their speedy and complete recovery — and for everyone infected, everywhere.

This virus is horrific and merciless — no one would wish its wrath on anyone.

We must get its spread under control. Enough.

Given Trump's record of divisive rhetoric, however, some commentaries have been highly nuanced.

"You should pray for any human being to recover from sickness," says the Rev. William Barber II, co-chairperson of the Poor People's Campaign and an activist minister at Greenleaf Christian Church in Goldsboro, N.C. "But that's not enough. That's not the full dimension of prayer."

Barber considers Trump "an enemy in public policy," but he insists he has no hatred for Trump as a person.

In Barber's own Pentecostal tradition, he says, when members of a congregation pray for someone who has fallen ill, they would offer "more layered" prayers.

Trump failed personally to take precautions against the virus, rejected the advice of public health experts and insisted that the country return quickly to normal activities. Some of his detractors therefore were probably tempted to conclude that by getting sick himself, he got what was coming to him.

Pray for, not against

Many faith leaders, however, warn their followers against rejoicing in another's suffering.

"Down that road lies self-destruction," says Rabbi Pamela Gottfried of Congregation Bet Haverim in Atlanta. "That kind of prayer takes a toll on the person. It's not good for the one who is praying those things."

Gottfried says she tells young people that the purpose of praying for anyone to heal is "to open up compassion in ourselves. We're really praying for ourselves to be more compassionate and put aside what in the face of illness and death are petty disagreements or political disagreements."

Alan Cross, a Southern Baptist pastor in Petaluma, Calif., who writes often on issues of justice, says he has been praying regularly with his congregation for Trump, "for his health and for wisdom."

Cross and other Christian ministers cite the apostle Paul's instruction in 1 Timothy 2:2, in which he advises Christians to pray "for kings and for all that are in authority; that we may lead a quiet and peaceable life in all godliness and honesty."

Clinical Study Considers The Power Of Prayer To Combat COVID-19

Clinical Study Considers The Power Of Prayer To Combat COVID-19

When he is critical of some leader, Cross says, "I don't want to be personal. I don't want to despise that person. Rather, I pray that they would act in a wise and just manner."

Anne Graham Lotz, the daughter of evangelist Billy Graham, says that when she first heard that Trump was infected with COVID, "I was earnestly praying that the Lord would spare him, that he would heal him and that doctors would make the right and wise choices with his care."

"And I believe the Lord answered that prayer," Lotz says.

Lotz supported Trump's election, but she says she would have prayed in a similar fashion for any U.S. president "because that's what the Bible tells us to do."

It now appears that the coronavirus outbreak at the White House may have originated at Trump's announcement of Amy Coney Barrett as his nominee for the Supreme Court. Lotz, who has written several books on the power and meaning of prayer and has her own ministry, says she noticed that the White House event came just as evangelical leaders were hosting a "Day of Prayer and Repentance" on the National Mall in Washington.

"Maybe the fact that so many people were struck with COVID that very afternoon was God's way of getting those people to look up," Lotz says. "When I look at my own life, when everything's going really well, I'm not as inclined to look up. It's when disaster or disease or death strikes, that's when we cry out to God. I think that's why he lets bad things happen to us, because then he gets our attention."