October 30, 2009 • The de facto leader of Honduras has agreed to sign a deal to end the country's months-long political stalemate and form a power-sharing government with ousted President Manuel Zelaya.

October 27, 2009 • Rep. Luis Gutierrez, a Democrat from Illinois, wants to bump immigration to the top of the President's agenda. But is it realistic for the House and Senate to take up immigration reform next year? Ruben Navarrette, a syndicated columnist for CNN.com, explains why he thinks Guitierrez's timeline is unrealistic.

October 27, 2009 • President Obama says he wants to change United States immigration policy. But so far, immigration has taken a backseat to other pressing issues, like health care, the economic recession and the ongoing conflicts in Afghanistan and Iraq. But Rep. Luis Gutierrez, a Democrat from Illinois, wants to bump immigration to the top of the President's agenda. Gutierrez explains why he thinks comprehensive immigration reform cannot wait any longer.

October 26, 2009 • The political crisis in the central American nation of Honduras is affecting the entire region. Most international aid to Honduras has been suspended and the country's borders have been intermittently shut since the June coup. Officials who work with migrants in southern Mexico say the turmoil is pushing more and more Hondurans to emigrate.

October 24, 2009 • The vast majority of undocumented Mexican workers in the U.S. are staying put. They are working less and hoping that an economic recovery restores jobs. Besides, they say, the recession back home in Mexico is even worse. Immigrant economic ties are strong between New York City and the Mexican city of Puebla.

In Mexico, An Eritrean Man Sets His Sights On U.S.

October 24, 2009 • Despite the economic downturn and diminishing job opportunities in the United States, impoverished people from around the globe continue to try to make the trek here. One man on Mexico's southern border has spent two years moving from his home country, the African nation of Eritrea, to the edge of Mexico. His ultimate goal? Washington, D.C.

In Mexico, An Eritrean Man Sets His Sights On U.S. 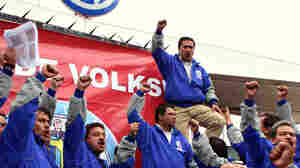 Mexican workers shout slogans during a strike at Volkswagen's plant in Puebla, Mexico, in August. About 9,000 workers went on strike after pay negotiations collapsed, and many employees have since been placed on half-time shifts. Jose Castanares/AFP/Getty Images hide caption

October 24, 2009 • The massive economic downturn in Mexico, with the slowest recovery in Latin America, has opened a debate about close ties to the U.S. market. The codependent relationship means that as Mexico struggles to get back on its feet, it also hurts the U.S. economy. 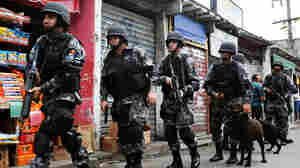 October 22, 2009 • Weeks after Rio de Janeiro was awarded the 2016 Olympics, a turf battle between drug gangs has killed two dozen people, including three police officers. The gang warfare raises questions about Rio's ability to control the violence that has plagued its sprawling slums for years.

October 17, 2009 • A prominent human rights worker in Cuidad, Juarez, sought temporary refuge in El Paso, Texas, claiming his life has been threatened. But it's not the drug cartels who are threatening him, he says, it's the Mexican military. He says they've targeted him after he detailed their hundreds of abuses in the past year. Now he's been placed in detention by U.S. Customs and Immigration. 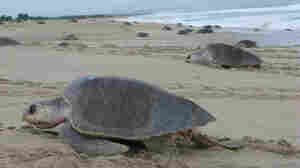 Olive Ridley turtles come ashore to lay their eggs on La Escobilla beach in Oaxaca, Mexico, one of the most important nesting grounds in the world for the creatures. Before the Mexican government instituted a ban on their slaughter, Olive Ridley turtles were harvested nearly to extinction. Jason Beaubien/NPR hide caption

October 16, 2009 • Prized for their meat, shells, skins and eggs, Olive Ridley turtles were harvested to the brink of extinction in Mexico during the 1970s and '80s. But thanks to a government ban on their slaughter, about 1 million of the sea turtles now nest on three beaches in Oaxaca.

October 14, 2009 • Venezuela's President Hugo Chavez has ordered the nationalization of the oil industry, steel and cement companies — even coffee roasters. Now, he could be taking aim at golf. He dismissed the sport as elitist this summer and has taken steps that could lead to the takeover of two courses. Some golfers are bracing for more.

October 13, 2009 • Mexican President Felipe Calderon has seized the state-run electricity company in the capital and fired some 50,000 unionized workers. Calderon says the utility was inefficient and corrupt, and a drain on the national treasury. Labor leaders say he's playing with fire. 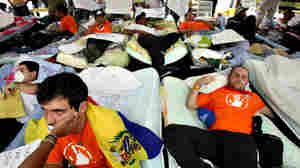 Venezuelan students spend the fifth day of a hunger strike outside the headquarters of the Organization of American States in Caracas, Sept. 28, 2009. Students across the country held a hunger strike in support of Julio Cesar Rivas, a student who was arrested during anti-government demonstration in August. Rivas was later released from prison, though the charges against him have not been dropped. Thomas Coex/AFP/Getty Images hide caption

October 6, 2009 • In Venezuela, dozens of key government opponents have been jailed in recent months. The government says they are dangerous adversaries who foment violence. But human rights groups and others say President Hugo Chavez is singling out foes in politically motivated witch hunts. 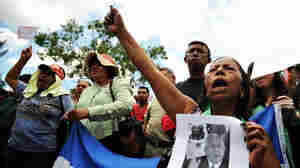 Rich Vs. Poor At Root Of Honduran Political Crisis

October 5, 2009 • In Honduras, a protracted presidential standoff is highlighting the deep divisions in the country's society. Supporters say deposed President Manuel Zelaya is being punished for snubbing the elite and championing the poor; critics say he acted unconstitutionally.

Rich Vs. Poor At Root Of Honduran Political Crisis