Accessibility links
Twitter For Dummies : As A Matter Of Fact If I use Twitter does that mean I'm a twit? 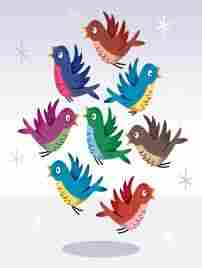 While preparing for the launch of AAMOF (short for As A Matter of Fact), I signed up for a Twitter account. Problem is, I'm a twitter tenderfoot. My paw pads are so soft I don't even know the proper Twitter vernacular. Laugh and mock if you must, but what's the correct term for the act of using Twitter? Is it Twittering? Tweeting? Twitting? And what does one call a person who uses Twitter? A Twit? A Tweeter? A Twitterer?

In my quest to locate the answer, I pulled out the trusty Oxford English Dictionary. Much to my surprise I found that twit is a noun but it's also an intransitive verb meaning "to blab". After a quick consultation about intransitive verb usage with the grammar and transcripts czarina, Dorothy Hickson, I now feel confident and comfortable saying the NPR library twits.

Interested in following our Twitter Tweets? You can find us under the user name nprlibrary. Till then!

[Note: The Transcripts Czarina wishes it to be known that She Does Not Tweet.]