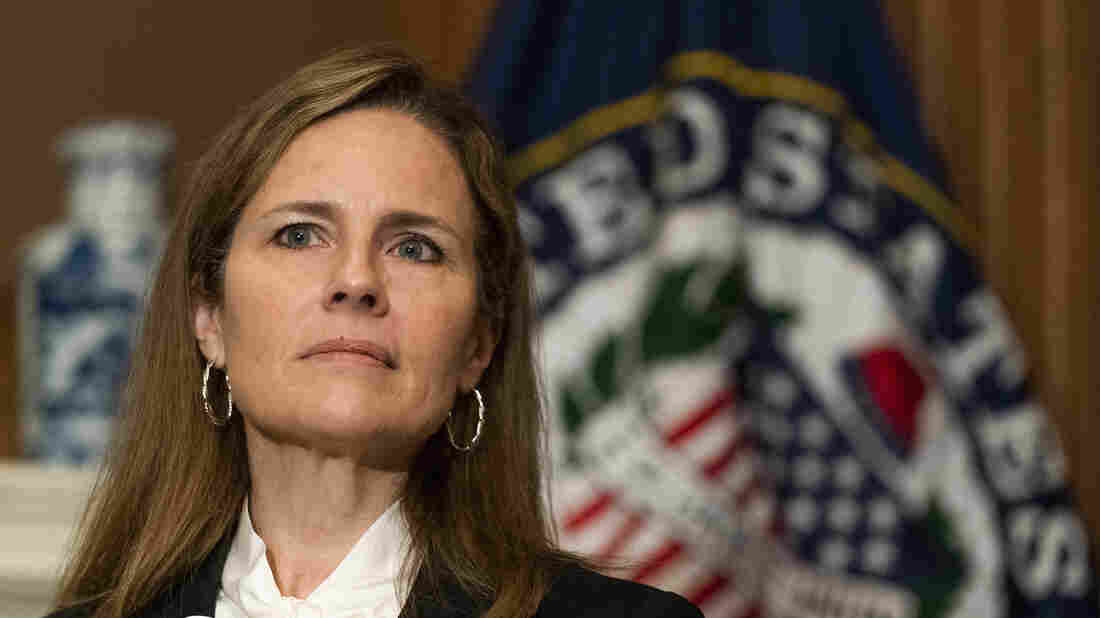 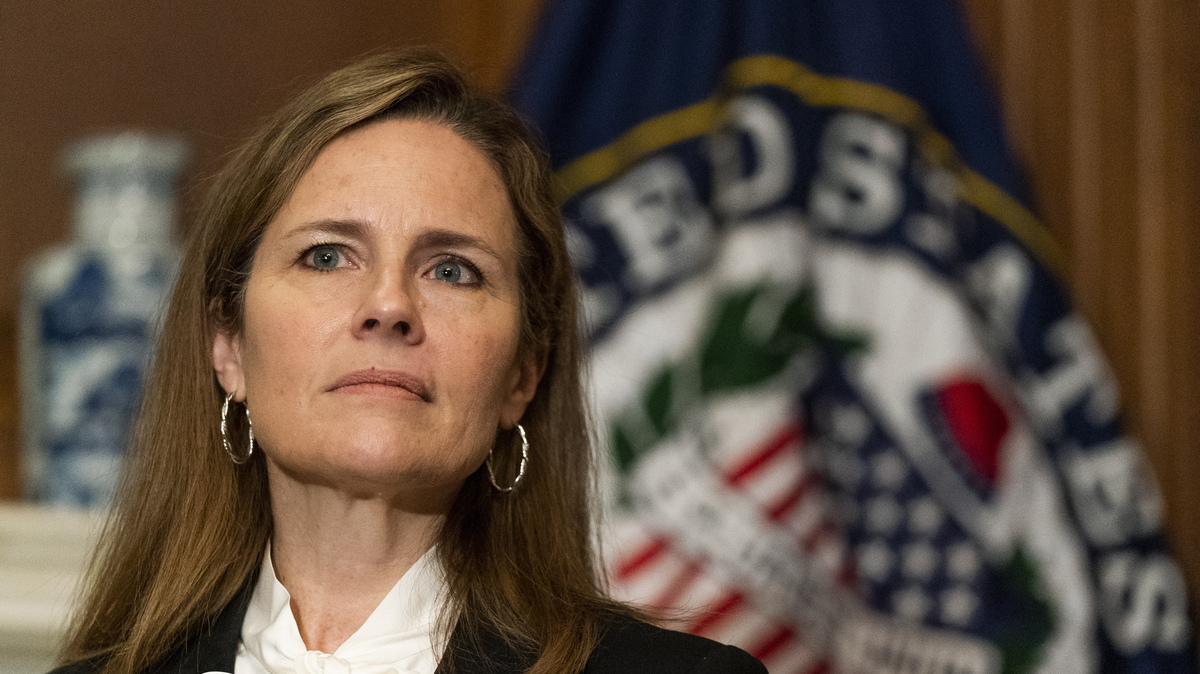 Judge Amy Coney Barrett is set to give a glimpse of her judicial philosophy as her Supreme Court confirmation hearing begins in front of the Senate Judiciary Committee on Monday.

"Courts have a vital responsibility to enforce the rule of law, which is critical to a free society," Barrett is set to say in her opening statement. "But courts are not designed to solve every problem or right every wrong in our public life. The policy decisions and value judgments of government must be made by the political branches elected by and accountable to the People. The public should not expect courts to do so, and courts should not try."

NPR obtained the opening statement from a source familiar with the hearing preparations who was not authorized to speak on the record.

Barrett, who is President Trump's pick to replace Justice Ruth Bader Ginsburg on the Supreme Court, also plans to detail in her opening statement her link to the late Justice Antonin Scalia, for whom she clerked.

"When I write an opinion resolving a case, I read every word from the perspective of the losing party," Barrett will say in her statement. "I ask myself how would I view the decision if one of my children was the party I was ruling against: Even though I would not like the result, would I understand that the decision was fairly reasoned and grounded in the law? That is the standard I set for myself in every case, and it is the standard I will follow as long as I am a judge on any court."

The confirmation hearing is moving ahead under exceedingly unusual circumstances, with Election Day looming and a coronavirus outbreak still roiling Washington.

Republicans are aiming to stick to a tight and closely choreographed timeline that would allow Barrett to join the court before Election Day on Nov. 3.

Senate Majority Leader Mitch McConnell, R-Ky., has been adamant that the Judiciary Committee hearing should proceed despite three Republican senators, including two members of the committee, testing positive for the coronavirus.

The committee members were among those who attended an event in the White House Rose Garden to announce Barrett's nomination. That event has been at the nexus of the ongoing spread of the coronavirus in GOP political circles.

McConnell has said that the committee is capable of holding hearings that are part virtual and part in person and that the development will not prevent Barrett's confirmation. The Republican leader did postpone floor votes for two weeks after the news of the outbreak.

"We will be voting on the nominee, you know, very soon," McConnell said in a recent appearance on Hugh Hewitt's radio show. "I haven't picked an exact point to bring the nomination up, but it's front and center for the American people."

Confirmation in a pandemic

The committee plans to allow members to appear either in person or virtually and has drastically reduced the number of people allowed in the hearing room. Barrett's family will be seated as a pod, press access will be pared down and hygiene stations with masks, gloves and sanitizer will be accessible throughout the room, according to committee aides.

Those protections have not been enough to assuage protests from Democrats, who say the hearings should be halted. They are calling for committee-wide testing and in-person hearings for a nominee who is chosen by whoever wins the election in November.

Senate Minority Leader Chuck Schumer, D-N.Y., has accused Judiciary Committee Chairman Lindsey Graham, R-S.C., of barreling ahead with the confirmation even as committee members Mike Lee, R-Utah, and Thom Tillis, R-N.C., have been diagnosed with COVID-19.

"Moving forward with the committee process when three Senators have recently tested positive for Covid-19 is irresponsible and dangerous, but doing so without requiring all members to be tested before a hearing in accordance with CDC best practices would be intentionally reckless," Schumer said in a statement. "If Chairman Graham doesn't require testing, it may make some wonder if he just doesn't want to know the results."

Republicans have rejected those calls and are moving ahead with the ambitious schedule that leaves little room for error.

Election politics in the hearing room

Republican leaders have known since shortly after Barrett was nominated that they have the votes to confirm her.

The lack of drama over the potential outcome of a final vote on the Senate floor opens opportunities for both parties to use the hearings as part of a final pitch to voters who are deciding the outcome of both the presidential election and Senate races that could shift the balance of power in Washington for several years.

For Republicans, the four days of hearings will be an opportunity to highlight Barrett's legal career, conservative judicial philosophy and close connection with Scalia. They also plan to draw out political attacks from Democrats, according to several aides familiar with the committee.

Outside groups have rushed to help both parties build not only a case for Barrett but also a political argument to the public. Groups like the Article III Project, which was created to defend Trump's judicial nominees, have been holding press calls, writing opinion pieces and appearing on TV to advocate for Barrett.

"Wrapped within the whole political moment of a presidential election and a Supreme Court confirmation is the very question of, what do we want our structure of government to look like?" said Ian Prior, a senior counselor for the group. "The Senate is really the place where there's going to be the most to gain or to lose based on how those hearings go, how people conduct themselves in those hearings, especially when you're talking about in the middle of a presidential election."

Four Republicans on the Senate committee are running for reelection, many in races that have tightened in recent weeks. Graham, Tillis, Texas' John Cornyn and Iowa's Joni Ernst are all on the ballot in their home states. Democrats hope to use the nationally televised hearings to their advantage, according to several Democratic aides.

Democrats have few options for slowing the nomination or preventing a vote on the Senate floor. However, the hearings create a national stage for members of the Judiciary Committee to make a final pitch to voters.

For Democrats, that means talking first and foremost about health care. They say Barrett could be the key vote for GOP attempts to overturn the Affordable Care Act in a case that is scheduled to be argued before the court on Nov. 10, one week after Election Day.

Democrats say Barrett was chosen specifically on the belief that she would dismantle the health care law. Sen. Chris Coons, D-Del., told reporters on a call last week that he has already raised those concerns with Barrett and plans to do so again during the hearing.

"I just wanted her to hear directly from me that what I'm most concerned about is that in the middle of a pandemic, President Trump and 18 Republican state attorneys general are trying to overturn the Affordable Care Act and its protections," Coons said. "The ACA is not just on the docket of the Supreme Court — it's on the ballot in the fall."

Democrats also plan to focus on Barrett's stance on abortion. That has become a tricky subject as Republicans accuse Democrats of attacking Barrett for her conservative Catholic faith, not her judicial philosophy.

Republicans, from McConnell to committee members, have spent the past several weeks accusing Democrats of religious bigotry in how they discuss Catholicism and Barrett's faith. They point to questions Sen. Dianne Feinstein, D-Calif., asked Barrett during her confirmation hearings in 2017 when she was before the committee for her current post on the 7th U.S. Circuit Court of Appeals. At the time, Feinstein said, "The dogma lives loudly within" Barrett.

Democrats have vowed to avoid discussions of faith with Barrett in recent weeks, but Republicans have focused intently on the issue. Committee members like Sen. Ted Cruz, R-Texas, have been on cable news and Twitter denouncing Democrats for a "smear campaign" against Barrett.

But Democrats call the religion discussion an attempt at a political trap that they have vowed to avoid.