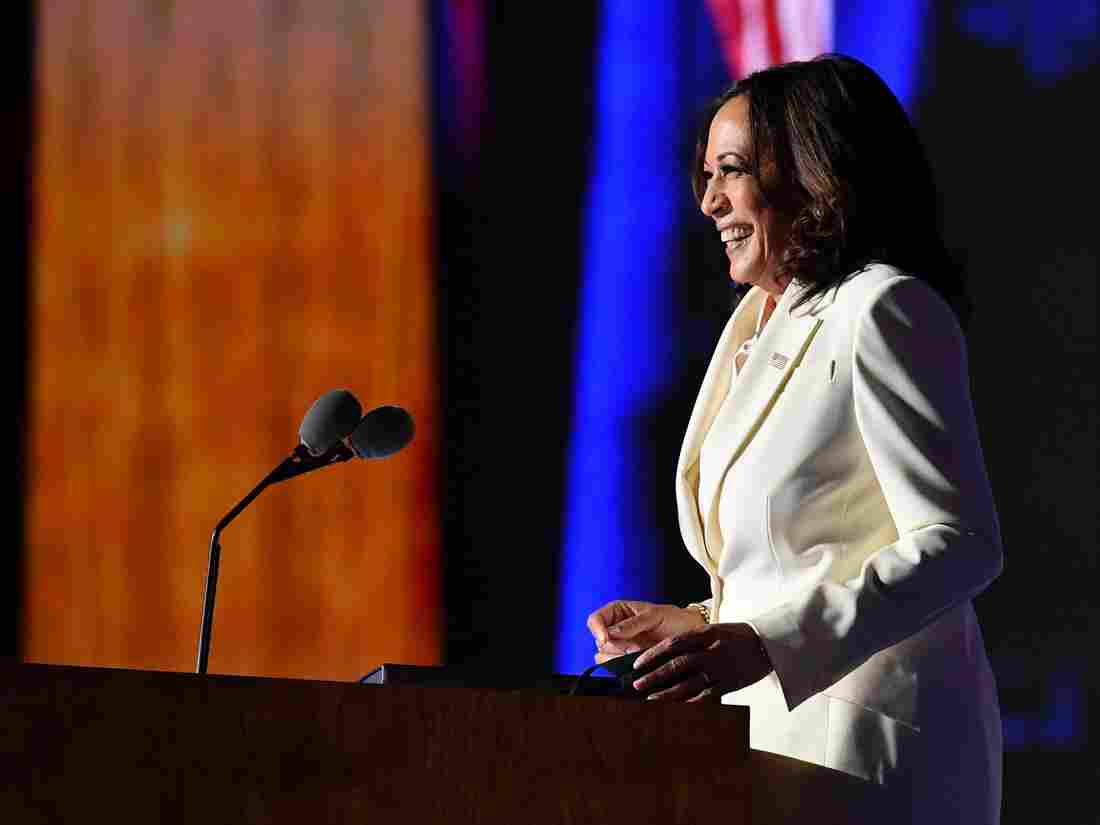 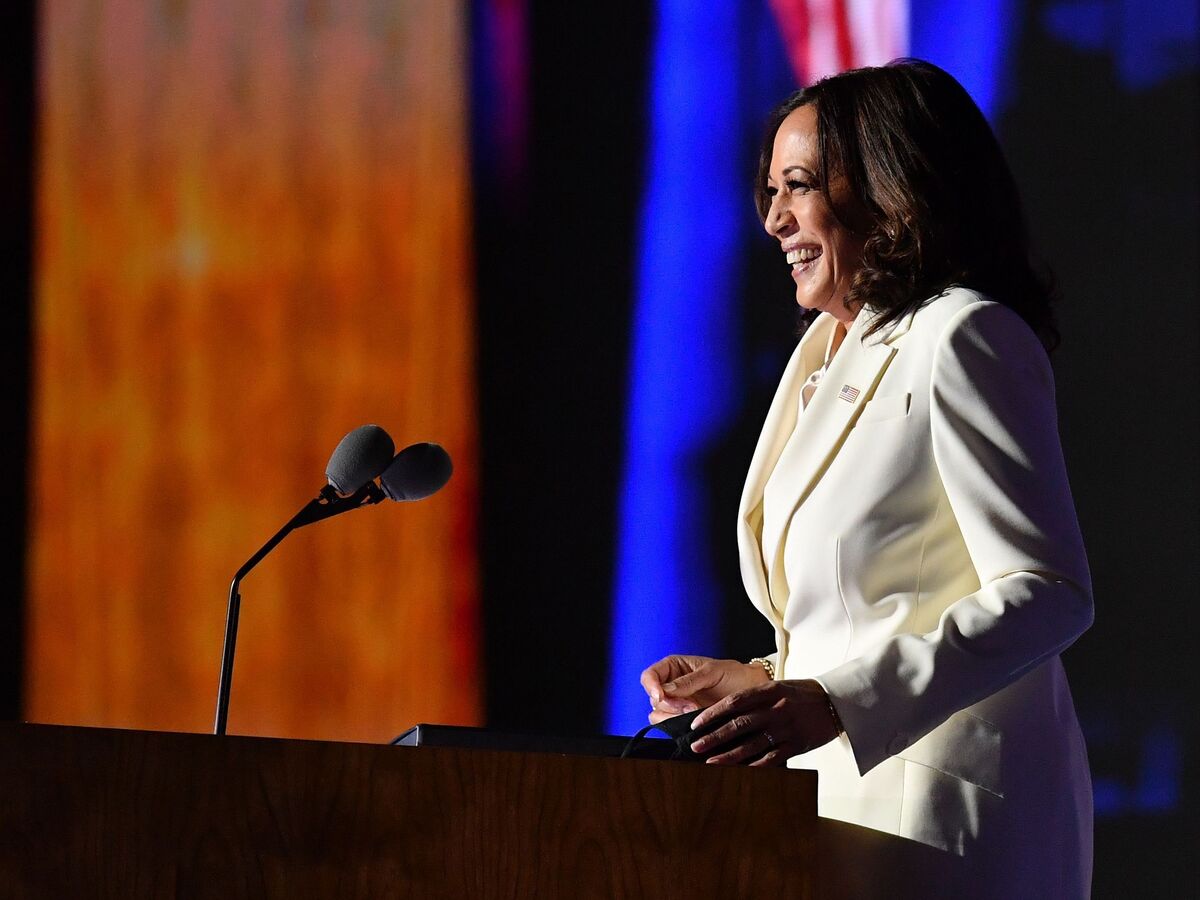 Under a sky lit up by blue Jumbotrons outside the Chase Center in Wilmington, Del., Vice President-elect Kamala Harris thanked Democratic supporters for organizing to deliver a victory and spoke about the historic nature of her win.

"Protecting our democracy takes struggle, it takes sacrifice," she said, "but there is joy in it. There is progress because we the people have the power to build a better future."

Harris spoke Saturday evening ahead of President-elect Joe Biden to an energetic crowd as people sat on top of cars and trucks waving American flags. The Associated Press called the presidential race for Biden and Harris earlier Saturday.

"You ushered in a new day for America," she said. "Thank you for turning out in record numbers to make your voices heard," she said. In addition to supporters, she thanked campaign staff and poll workers.

Read a transcript of Harris' remarks below.

Speaking of her historic win, Harris said was thinking about her immigrant mother and generations of Black women and other women of color who had paved the way for her. Harris is the first woman, first Black person and first Asian American to be elected vice president.

Biden, she said, "had the audacity to break one of the most substantial barriers ... and select a woman as his vice president," she said to honks and cheers. "But while I will be the first woman in this office, I will not be the last."

She wore a white suit, a nod to suffragists who fought for women's right to vote a century ago.

And while she didn't mention the coronavirus by name, she said, "I know times have been challenging, especially the last several months ... but we have also witnessed your courage," referring to the pandemic that has killed nearly a quarter million Americans.

Despite that, she said, "you voted, and you delivered a clear message: You chose hope."

Introducing Biden at the event, Harris praised him as a man with purpose, a big heart — "a healer, a uniter, a tested and steady hand."

Congressman John Lewis, before his passing, wrote: "Democracy is not a state. It is an act."

And what he meant was that America's democracy is not guaranteed.

It is only as strong as our willingness to fight for it, to guard it and never take it for granted.

And protecting our democracy takes struggle.

It takes sacrifice. There is joy in it and there is progress.

Because We The People have the power to build a better future.

And when our very democracy was on the ballot in this election, with the very soul of America at stake, and the world watching, you ushered in a new day for America.

To our campaign staff and volunteers, this extraordinary team — thank you for bringing more people than ever before into the democratic process and for making this victory possible.

To the poll workers and election officials across our country who have worked tirelessly to make sure every vote is counted — our nation owes you a debt of gratitude as you have protected the integrity of our democracy.

And to the American people who make up our beautiful country — thank you for turning out in record numbers to make your voices heard.

I know times have been challenging, especially the last several months.

The grief, sorrow, and pain. The worries and the struggles.

But we've also witnessed your courage, your resilience, and the generosity of your spirit.

For 4 years, you marched and organized for equality and justice, for our lives, and for our planet.

And then, you voted. You delivered a clear message.

You chose Joe Biden as the next President of the United States of America.

Joe is a healer. A uniter. A tested and steady hand.

And a man with a big heart who loves with abandon.

It's his love for Jill, who will be an incredible First Lady.

It's his love for Hunter, Ashley, his grandchildren, and the entire Biden family.

And while I first knew Joe as Vice President, I really got to know him as the father who loved Beau, my dear friend, who we remember here today.

To my husband Doug, our children Cole and Ella, my sister Maya, and our whole family — I love you all more than I can express.

We are so grateful to Joe and Jill for welcoming our family into theirs on this incredible journey.

And to the woman most responsible for my presence here today — my mother, Shyamala Gopalan Harris, who is always in our hearts.

When she came here from India at the age of 19, maybe she didn't quite imagine this moment.

But she believed so deeply in an America where a moment like this is possible.

So, I'm thinking about her and about the generations of women — Black Women.

Asian, White, Latina, and Native American women throughout our nation's history who have paved the way for this moment tonight.

Women who fought and sacrificed so much for equality, liberty, and justice for all, including the Black women, who are too often overlooked, but so often Prove that they are the backbone of our democracy.

Tonight, I reflect on their struggle, their determination and the strength of their vision — to see what can be unburdened by what has been — I stand on their shoulders.

And what a testament it is to Joe's character that he had the audacity to break one of the most substantial barriers that exists in our country and select a woman as his Vice President.

But while I may be the first woman in this office, I won't be the last.

Because every little girl watching tonight sees that this is a country of possibilities.

And to the children of our country, regardless of your gender, our country has sent you a clear message:

Dream with ambition, lead with conviction, and see yourself in a way that others might not see you, simply because they've never seen it before.

And we will applaud you every step of the way.

To the American people:

No matter who you voted for, I will strive to be the Vice President that Joe was to President Obama — loyal, honest, and prepared, waking up every day thinking of you and your families. Because now is when the real work begins.

The Hard work. The Necessary work. The Good work.

The essential work to save lives and beat this pandemic.

To rebuild our economy so it works for working people.

To root out systemic racism in our justice system and society.

To combat the climate crisis.

To unite our country and heal the soul of our nation.

The road ahead will not be easy.

But America is ready. And so are Joe and I.

We have elected a president who represents the best in us.

A leader the world will respect and our children can look up to.

A Commander in Chief who will respect our troops and keep our country safe.

And a President for all Americans.

It is now my great honor to introduce the President-elect of the United States of America, Joe Biden.