Accessibility links
Republicans React To Trump's Defeat And Biden's Victory : Updates: 2020 Election Results Reactions from Republican lawmakers on President Trump's claims that the election isn't over and that Democrats are trying to "steal" the election have varied. 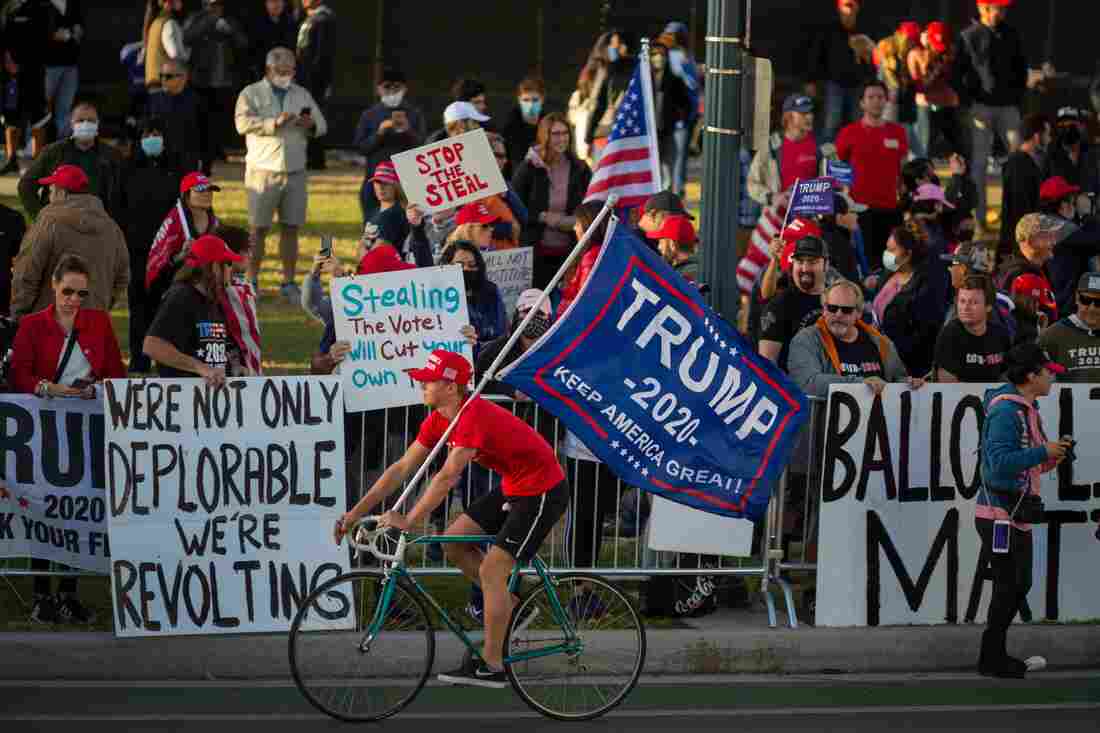 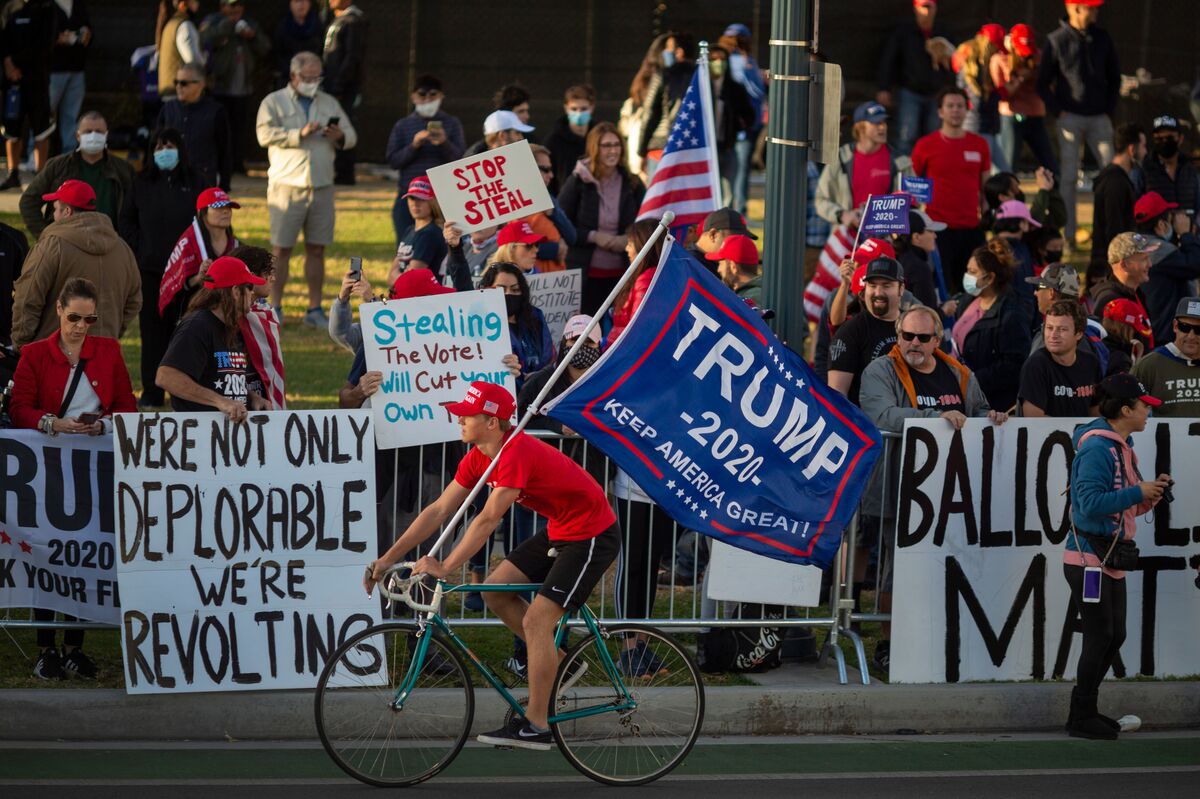 Supporters of President Trump rally in Beverly Hills, Calif., on Saturday after Democratic nominee Joe Biden was declared to have won the 2020 presidential election.

Some top Republicans on Sunday defended President Trump's continued protestations that the election is not over and his false claims that Democrats are trying to "steal" the election, while others said he should exit gracefully.

"President Trump has the right to request recounts and pursue legal challenges, and any unresolved issues will be properly adjudicated," Bush wrote. "The American people can have confidence that this election was fundamentally fair, its integrity will be upheld, and its outcome is clear."

Neither Sen. Mitch McConnell, the top Republican in the Senate, nor Rep. Kevin McCarthy, the House minority leader, had issued statements about Biden's victory as of Sunday afternoon. Meanwhile, one of Trump's top allies in the House struck a more combative tone once the race was called.

"There are still serious legal challenges that have been made, and until that process is resolved, the election is not final," House Minority Whip Steve Scalise, R-La., tweeted on Saturday.

Scalise wrote the "election isn't over until all legal votes are counted and certified," language that echoes Trump's repeated comments of counting only "legal" votes.

There has been no evidence of any widespread voter fraud or illegal election activity. And while Scalise and Trump both said the election isn't over because the votes haven't been certified, it's worth noting that certifying results will not change the overall outcome of the election.

Utah Sen. Mitt Romney, a former Republican presidential nominee, said that while he would prefer the world to witness a "more graceful departure" of Trump from 1600 Pennsylvania Ave., he ultimately believes the president will accept that he lost his reelection bid. 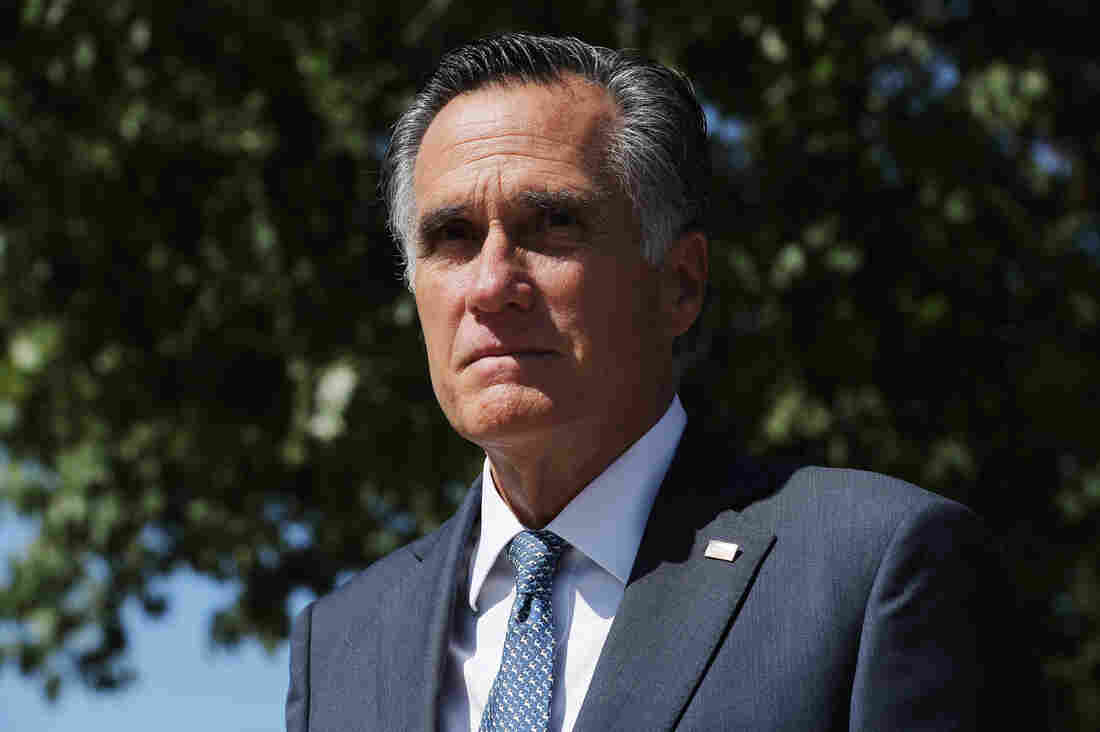 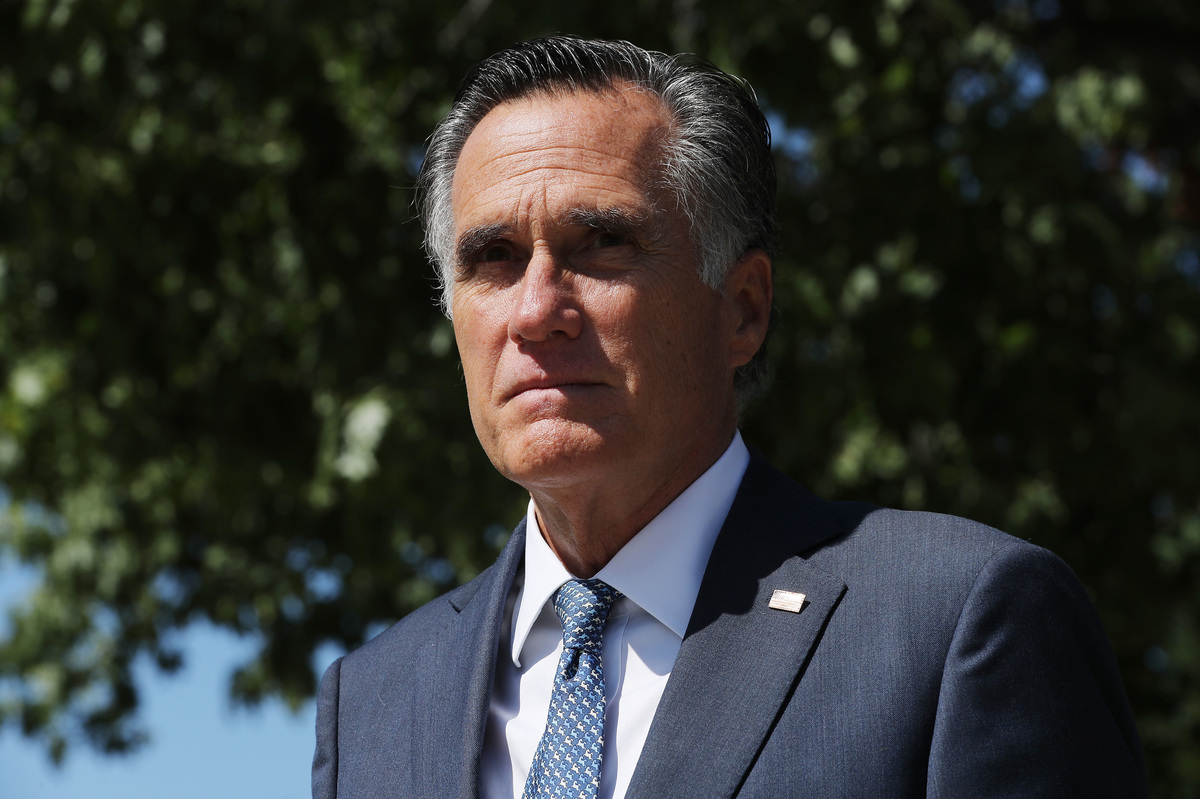 "You're not going to change the nature of President Trump in these last days, apparently, of his presidency," Romney told CNN's Jake Tapper on Sunday. "He is who he is and he has a relatively relaxed relationship with the truth, and so he's going to keep on fighting until the very end. But I'm convinced that once all remedies have been exhausted, if those are exhausted in a way that's not favorable to him, he will accept the inevitable."

He added: "But don't expect him to go quietly in the night — that's not how he operates."

Romney has long been critical of Trump, calling him a "phony" and a "fraud" during Trump's presidential campaign in 2016. He also famously broke with his party in voting to convict Trump on the impeachment charge of abuse of power.

"The media can project, but the media doesn't get to decide who the winner is. There is a canvassing process. That needs to happen," Blunt said on ABC's This Week.

"I said on Friday, I thought it was time for the president to turn this discussion over to his lawyers, time for the lawyers to make the case that they have, both in court and to the American people, and then we're going to have to deal with those facts as they're presented. That has to happen, and then we move forward," Blunt said.

Sen. Pat Toomey, R-Pa., said that although he believes the projection of Biden's victory is "probably correct," he wants to let the process continue as the Trump campaign attempts to litigate the results.

"Seventy million Americans voted for Donald Trump, and they and the president deserve to have this process play out," Toomey, who is retiring from the Senate in 2022, told CBS' Face the Nation.

Meanwhile, Gov. Larry Hogan, R-Md., put his stance on the matter bluntly: "It's time to get behind the winner of the race."

"We want to make sure every single vote is counted fairly, and I think there are legal processes, if you think there are mistakes," he told CNN's State of the Union. "But I don't think we're going to see anything that's going to overturn this election, and I haven't seen any evidence of widespread [fraud]. This is the way our system works, whether you like it or not."

"More and more people in my party are accepting the results, and a number of people also did congratulate the president-elect," Hogan said. "Hopefully, the president's team will do the right thing in the end."

Still, other Republicans appear to be walking the line between supporting a candidate taking legal actions, like pursuing recounts in various states, and not endorsing the core of Trump's argument that he should retain power because of conspiracies and illegal election activity by Democrats.

Florida Sen. Marco Rubio, who unsuccessfully ran in 2016 for the Republican presidential nomination, reminded the public the day after Election Day that "taking days to count legally cast votes is NOT fraud" and that "court challenges to votes cast after the legal voting deadline is NOT suppression."

If a candidate believes a state is violating election laws they have a right to challenge it in court & produce evidence in support of their claims. https://t.co/knsFLLBPke