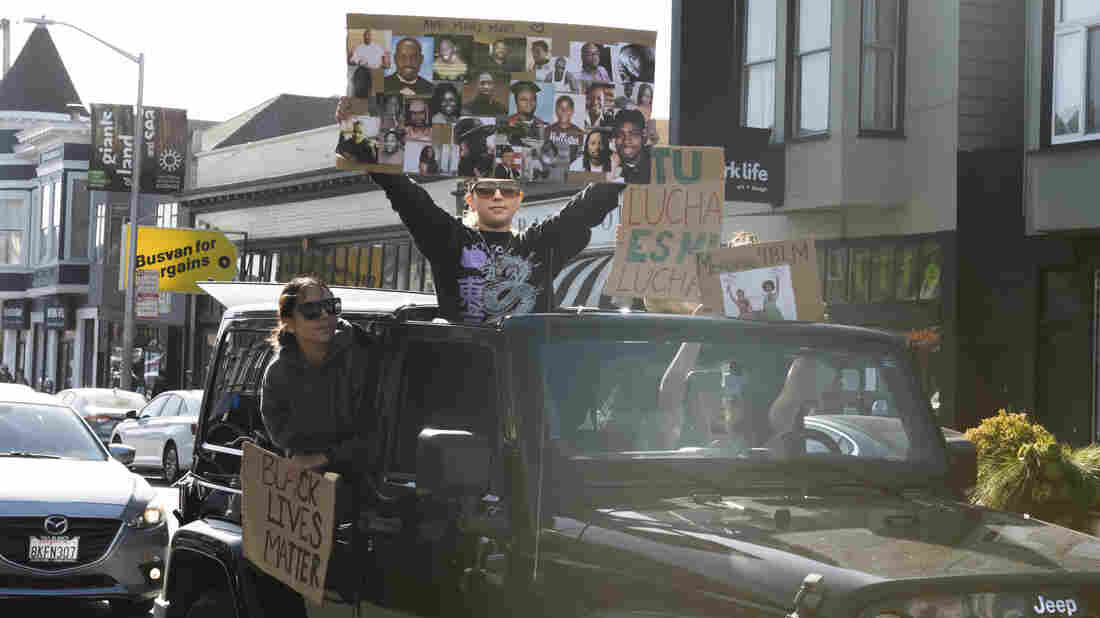 Protesters hold up signs during a caravan protest for justice in San Francisco on Thursday. Chloe Jackman Photography hide caption 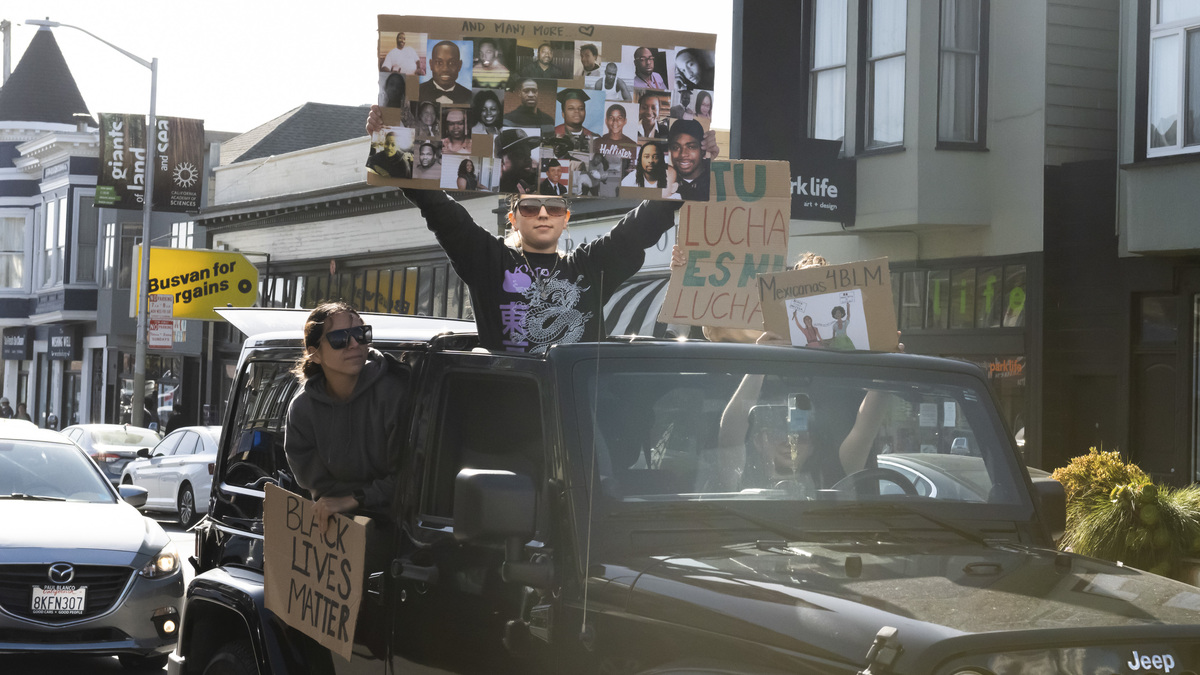 Protesters hold up signs during a caravan protest for justice in San Francisco on Thursday.

Hundreds and hundreds of cars wound through the streets of San Francisco. Drivers honked. Children chanted. Signs read "Black Lives Matter "and "No Justice, No Peace" as for hours protesters — socially distanced inside their own vehicles — added their voices to a national chorus of outrage.

Caravan protests like the one on Thursday afternoon, and an earlier demonstration in Oakland, have taken on new significance with a deadly pandemic and widespread street protests happening simultaneously. 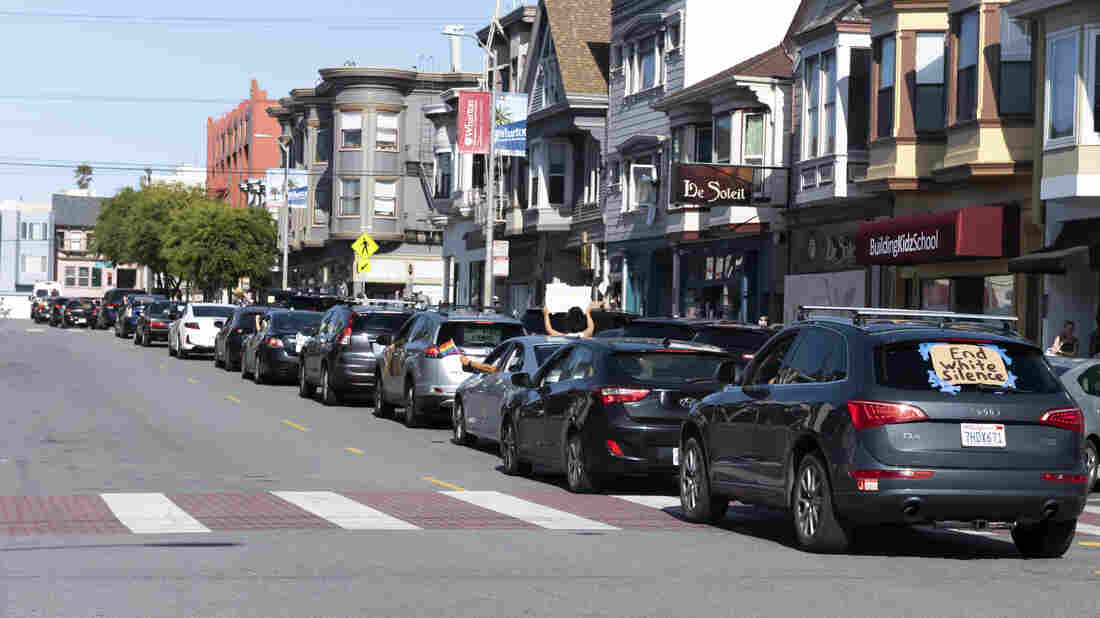 Hundreds of vehicles — by some estimates well more than a thousand — participated in the socially distanced protest. Honking, chanting and shouts filled the streets for hours. Chloe Jackman Photography hide caption 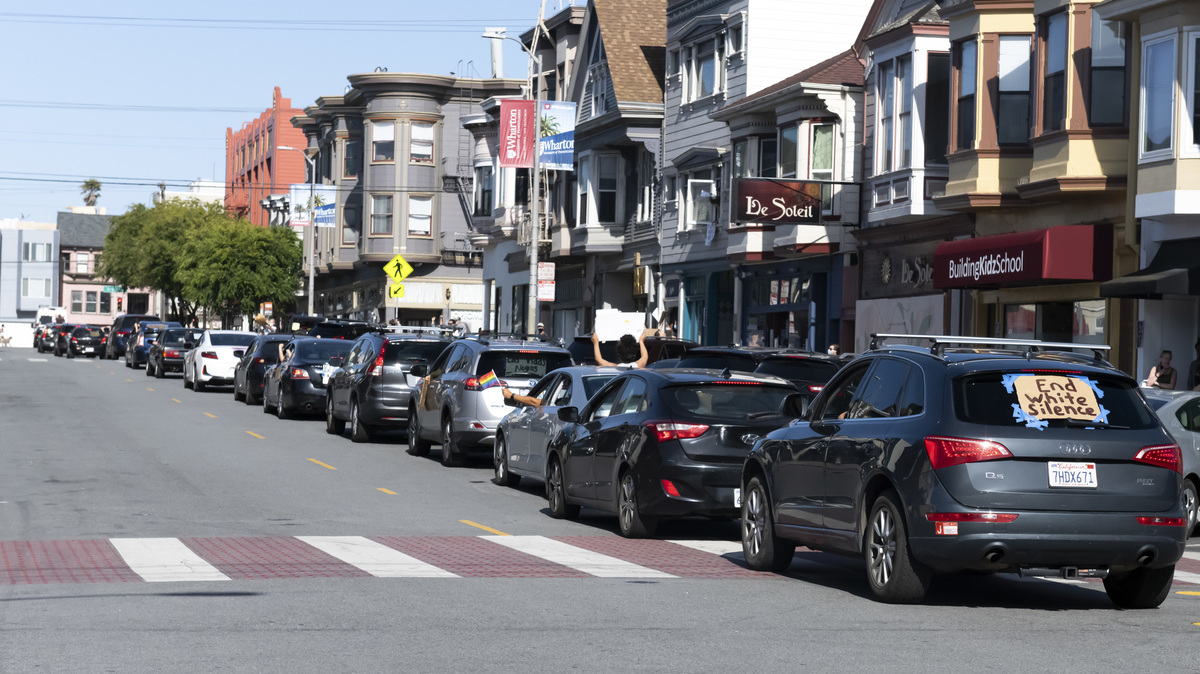 Hundreds of vehicles — by some estimates well more than a thousand — participated in the socially distanced protest. Honking, chanting and shouts filled the streets for hours.

"We're sick and tired of seeing our black brothers and sisters being killed in the streets and it being OK," says Elena Fong. "It's being broadcast across the nation and no one's doing anything about it."

Fong has two children, including a 3-year-old daughter with Down syndrome who is immunocompromised. A caravan protest felt safer than a march, given the risks of the coronavirus.

Elena Fong: "We saw that the crowds were massive and it was really hard to social distance ... "

Fran Culp says that, as someone with major medical issues, she was "thrilled" to have the option to join a protest with her husband and her dog.

Fran Culp: "We want to see major change and reform and defunding of police departments"

Surya Kishi Grover was fine going to protests herself — she had taken her 6-year-old son to an outdoor demonstration already. But her 2 1/2-year-old and 18-month-old were another story. The caravan offered a way to protest as an entire family, with Grover, her husband and all three kids in the minivan. They made a sign that read "Asians for Black Lives" and practiced chanting. 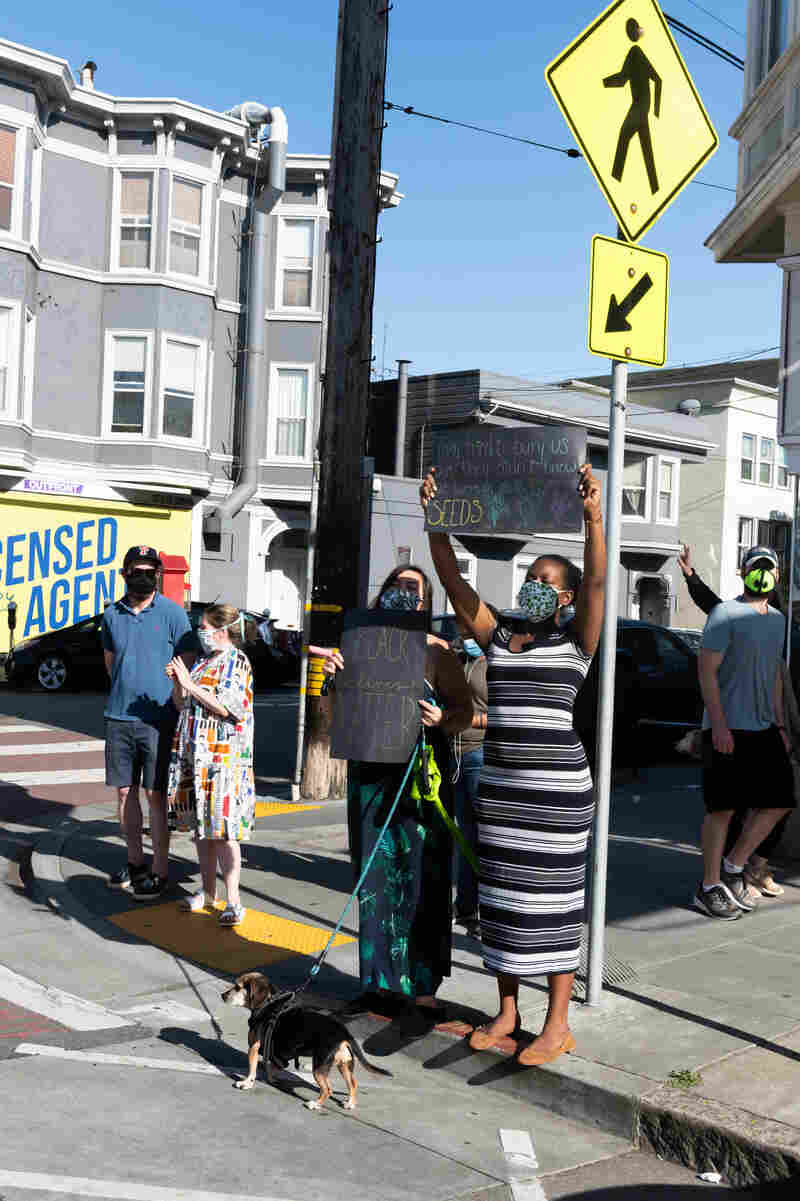 A protester holds a sign up in San Francisco as a caravan of cars drives by, in a socially distanced demonstration denouncing police brutality against black Americans. Bikers, pedestrians and residents along the caravan route participated in the protest. Chloe Jackman Photography hide caption

Erin Feher planned this protest as a safe option for people like Fong, Grover and Culp, who didn't want to gather in crowds during this pandemic — but also to bring the energy and passion of the ongoing protests into more parts of San Francisco.

Her family has attended anti-police brutality protests downtown, and coming back to Outer Richmond, the quiet residential neighborhood where they live, was jarring.

"To be so close yet live this very peaceful kind of unbothered existence was bothering me," she says.

Feher had never organized a protest before. She was scrolling Instagram this past weekend when she saw a post about a Zoom call offering ideas on how to turn outrage into action. On that call she learned about caravan protests, and picked up tips for how to organize.

It wasn't five or 10 people. According to Chloe Jackman, a photographer who witnessed the caravan, it took nearly 3 hours for all the vehicles to pass her studio; she estimates well over 1,000 vehicles participated.

Similar protests have been held in cities across America, from the large caravan in Oakland to ones planned in Wisconsin, Connecticut and the suburbs of Detroit on Sunday.