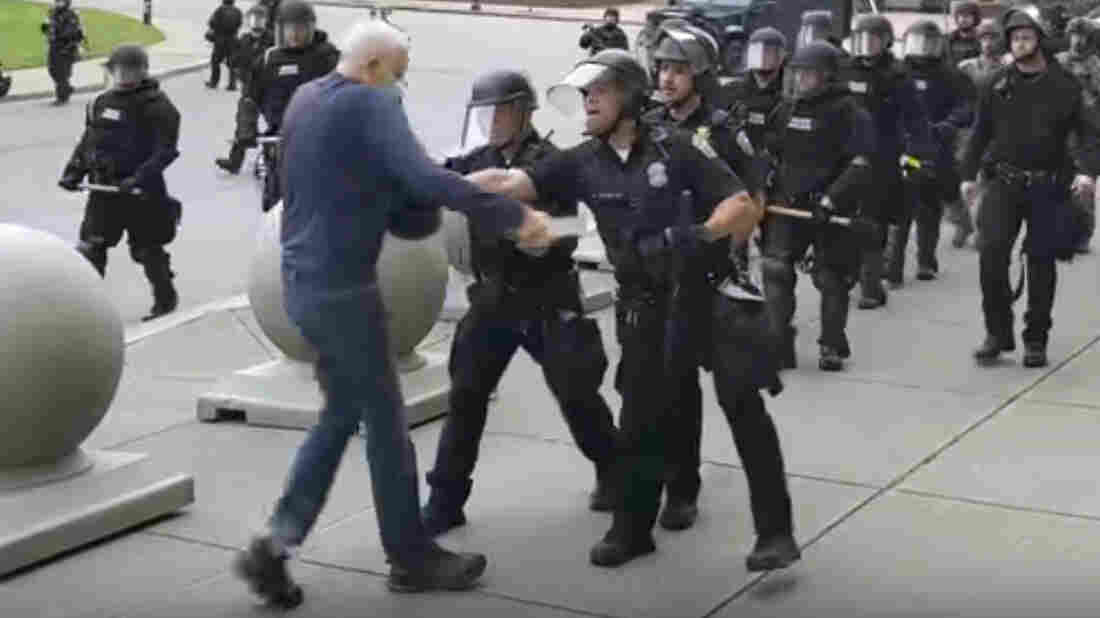 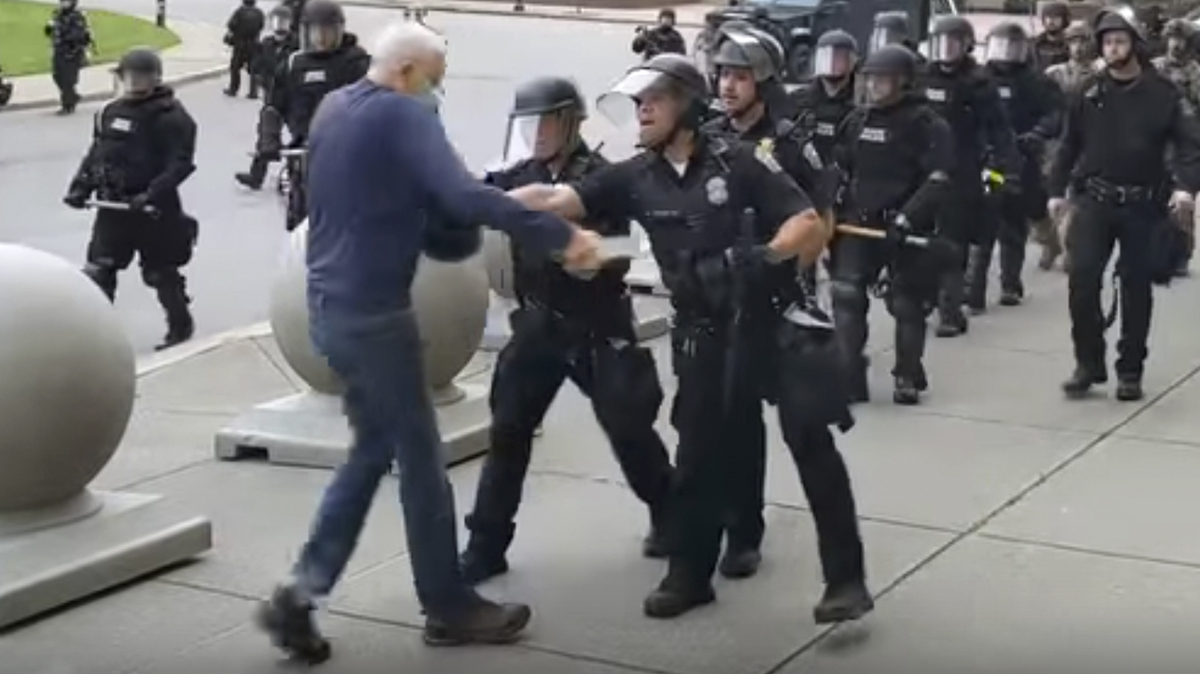 A video shows officers appearing to shove an older man who walked up to riot police Thursday in Buffalo, N.Y. Prosecutors have now filed charges against two officers.

Prosecutors have handed down charges for the two Buffalo Police officers seen apparently shoving an elderly protester in a graphic video earlier this week.

Erie County District Attorney John Flynn announced Saturday that officers Robert McCabe and Aaron Torgalski are facing one count each of second-degree assault. Both officers have pleaded not guilty.

Flynn said the severity of the charge, which carries a penalty of up to seven years in prison, is partly because of the age difference between the protester and the men charged. In the video, the officers appear to shove and injure Martin Gugino, 75, outside of City Hall as their fellow officers walk past.

"It's black and white in the letter of the law," Flynn told a news conference. "It says right there, anyone who's a victim 65 years or older and the perpetrator is [at least] 10 years younger — it's a felony."

Just about an hour ago, police officers shove man in Niagara Square to the ground (WARNING: Graphic). Video from: @MikeDesmondWBFO pic.twitter.com/JBKQLvzfET

After McCabe and Torgalski were suspended without pay, all 57 members of their unit, the Emergency Response Team (ERT), resigned their positions with the team on Friday and sought reassignment within the department.

"While some officers have chosen to remove themselves from a voluntary assignment with the ERT, it is important to note that no officers have actually resigned from the police force," Commissioner Byron Lockwood said in a statement Friday.

The officers have not publicly come forward to explain the mass resignation. John Evans, president of the Buffalo Police Benevolent Association, told local NBC affiliate WGRZ the reason was "disgust because of the treatment of two of their members, who were simply executing orders."

Another local media outlet, ABC affiliate WKBW, cited a pair of unnamed members of the ERT who contradicted the union's explanation, saying the resignation "has nothing to do with us supporting" the pair of suspended officers. Rather, the resignations, according to one officer, came because the union is not "legally backing us anymore."

At the root of the controversy gripping the department is the incident Thursday evening in downtown Buffalo, where officers were beginning to clear the area for a curfew. In a video captured by local NPR member station WBFO, Gugino approaches riot police officers, only to have them shove him backward.

When the man falls, his head hits the pavement and blood begins to drip from his ear as the bulk of the unit continues to walk past him; and at least one officer seeks help.

Gugino was hospitalized and is now in "serious but stable condition," according to a statement issued by his attorneys on Friday. Erie County Executive Mark Poloncarz, at a news conference Friday, said he is "progressing in his recovery."

"Police and other law enforcement have a duty to serve and protect the public. We need them to be the guardians of the public, not warriors engaged in battle with the public," Poloncarz said.

The charges brought Saturday add to what has been a growing tally of such actions filed against officers in multiple cities in recent days. In Minneapolis, prosecutors charged George Floyd's arresting officer with murder after video showed him planting his knee on Floyd's neck for nearly nine minutes; three other officers who were at the scene were charged with aiding and abetting murder. In Atlanta, a half-dozen officers face charges for a violent arrest during protests set off by Floyd's death.