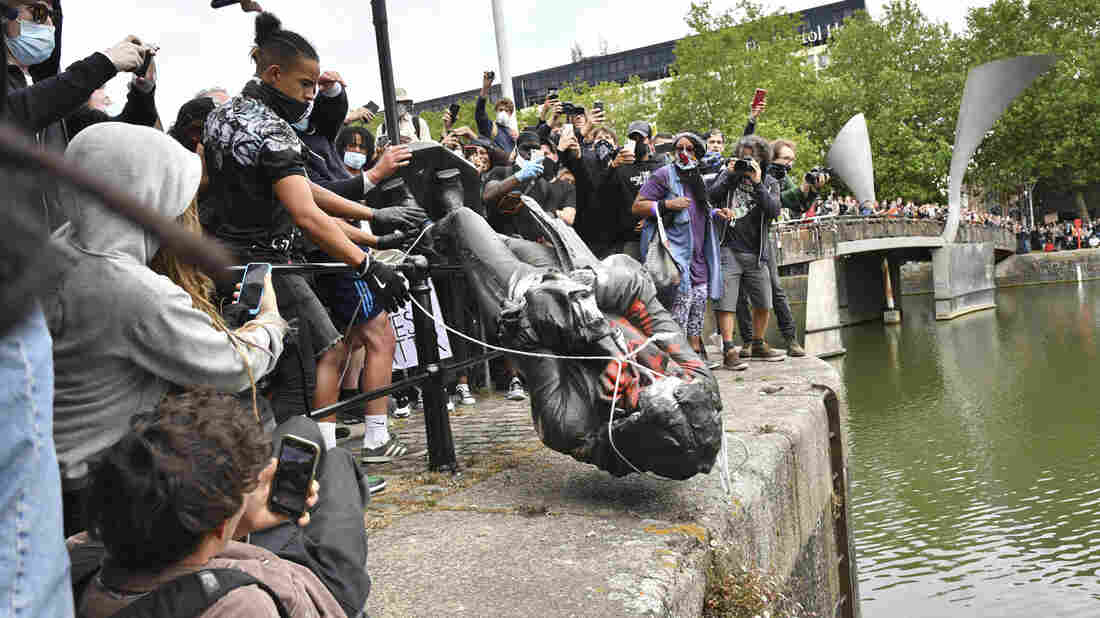 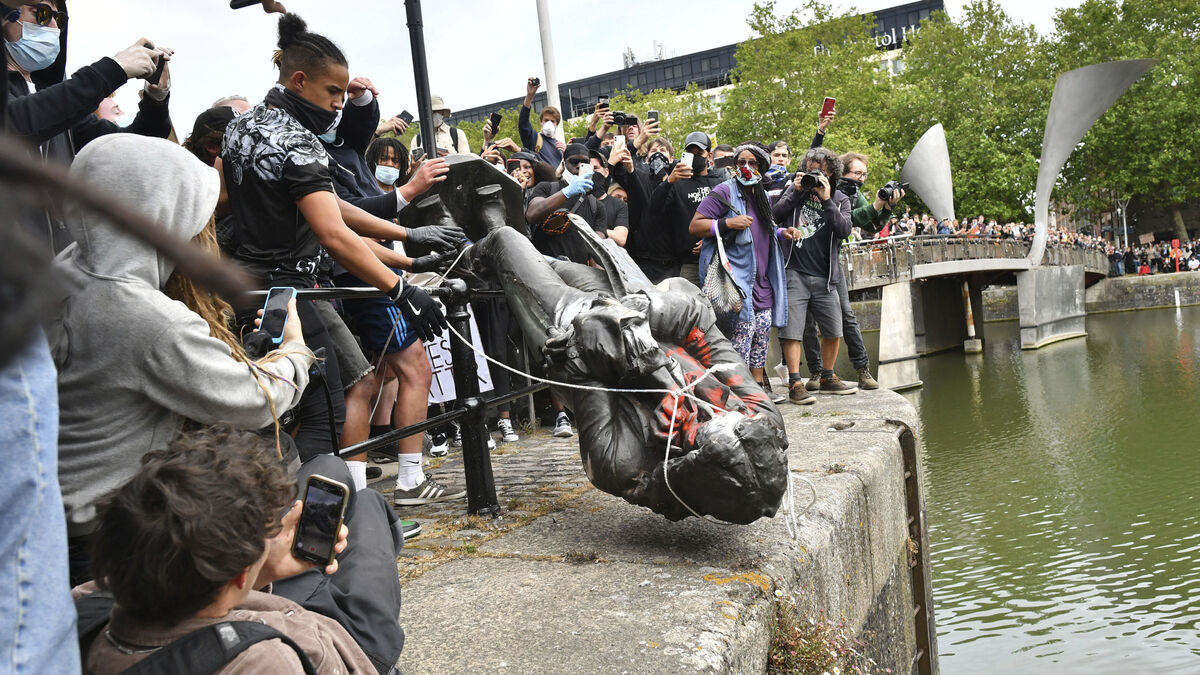 Protesters throw a statue of slave trader Edward Colston into Bristol Harbor on Sunday during a Black Lives Matter protest in England.

Protesters in Bristol, England, tore down the statue of an infamous slave trader Sunday and threw it into nearby Bristol Harbor.

The statue of Edward Colston in central Bristol had long been a point of contention for the city, as were the many landmarks and buildings that bore his name.

He helped build the city with the money he made as a leader of the Royal Africa Co., which trafficked an estimated 84,000 people from Africa to their enslavement in the Americas.

For many, the statue's removal was a long-awaited win.

"It was completely mind-blowing," Katie Finnegan-Clarke, an organizer who has fought to expose Colston's legacy, told NPR. Finnegan-Clarke is one of the founders of "Countering Colston," a group lobbying for the removal of the slave trader's name from Bristol's institutions.

"I think it felt like a big relief," she added, "and it was just incredibly poetic the way that he was dragged across the city and essentially thrown overboard into the water like so many people had suffered under his regime during the slave trade."

The moment a statue of slave trader Edward Colston toppled into Bristol’s harbour. ‘It’s what he deserves. I’ve been waiting all my life for this moment’ someone told me in the moments after. pic.twitter.com/6juqVrsJ6V

The Bristol City Council announced Monday it had collected the protest signs demonstrators laid around the statue's now-empty pedestal to preserve them for later display in a Bristol museum.

We have collected all the signs that were laid in the city after yesterday's #BlackLivesMatter protest so we can preserve them for display in the @mshedbristol pic.twitter.com/Beo09OKcdk

The statue's toppling came amid worldwide protests against racial injustice and police brutality sparked by the police killing of George Floyd in Minneapolis. Protests took place across the United Kingdom on Sunday, including a large Black Lives Matter demonstration in London.

Bristol Mayor Marvin Rees, who is black and the son of a Jamaican migrant, said in an interview with the BBC that while he did not condone the protesters' actions, he understood them.

"I can't and won't pretend the statue of a slave trader in a city I was born and grew up in wasn't an affront to me and people like me," he said.

Rees said the protest itself is now part of the city's history and that the statue would likely be fished out of the harbor and preserved in a museum.

Other public officials were far more critical of the statue's toppling. Prime Minister Boris Johnson's spokesperson called it a "criminal act." In an interview with Sky News, the country's Home Secretary Priti Patel called the move an "utterly disgraceful" act of vandalism and called for an investigation.

These demonstrations have been subverted by thuggery.

Rees responded to Patel's comments in a later interview with the BBC, saying they show "an absolute lack of understanding" of where Britons stand on racial injustice.

"You can't just bury your head in the sand and just determine to describe this as mindless vandalism," Rees said. "Even if you don't like the events, the events have meaning."