Accessibility links
LA Protesters Arrested For Violating Curfew Won't Be Charged : Live Updates: Protests For Racial Justice "I want to encourage the exchange of ideas and work to establish dialogue between law enforcement and protesters so that we may implement enduring systemic change," the LA district attorney said. 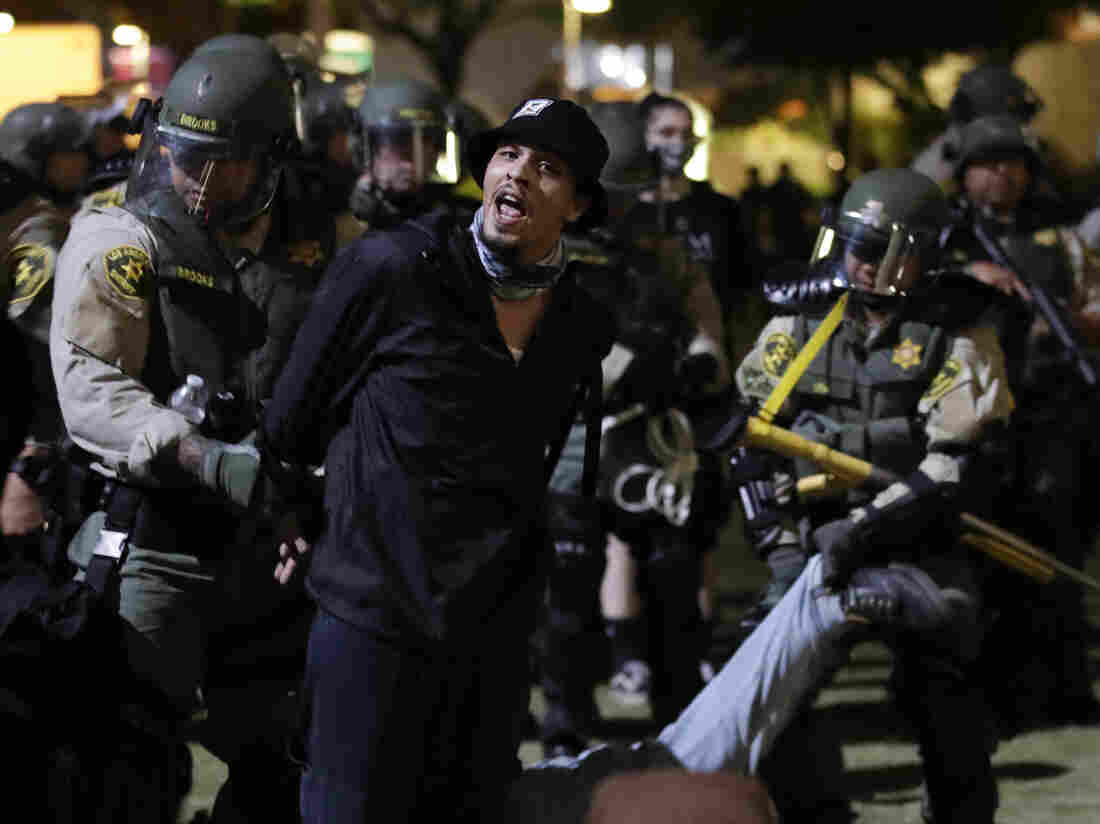 Demonstrators are arrested for a curfew violation Wednesday, June 3 in downtown Los Angeles during a protest over the death of George Floyd. Marcio Jose Sanchez/AP hide caption 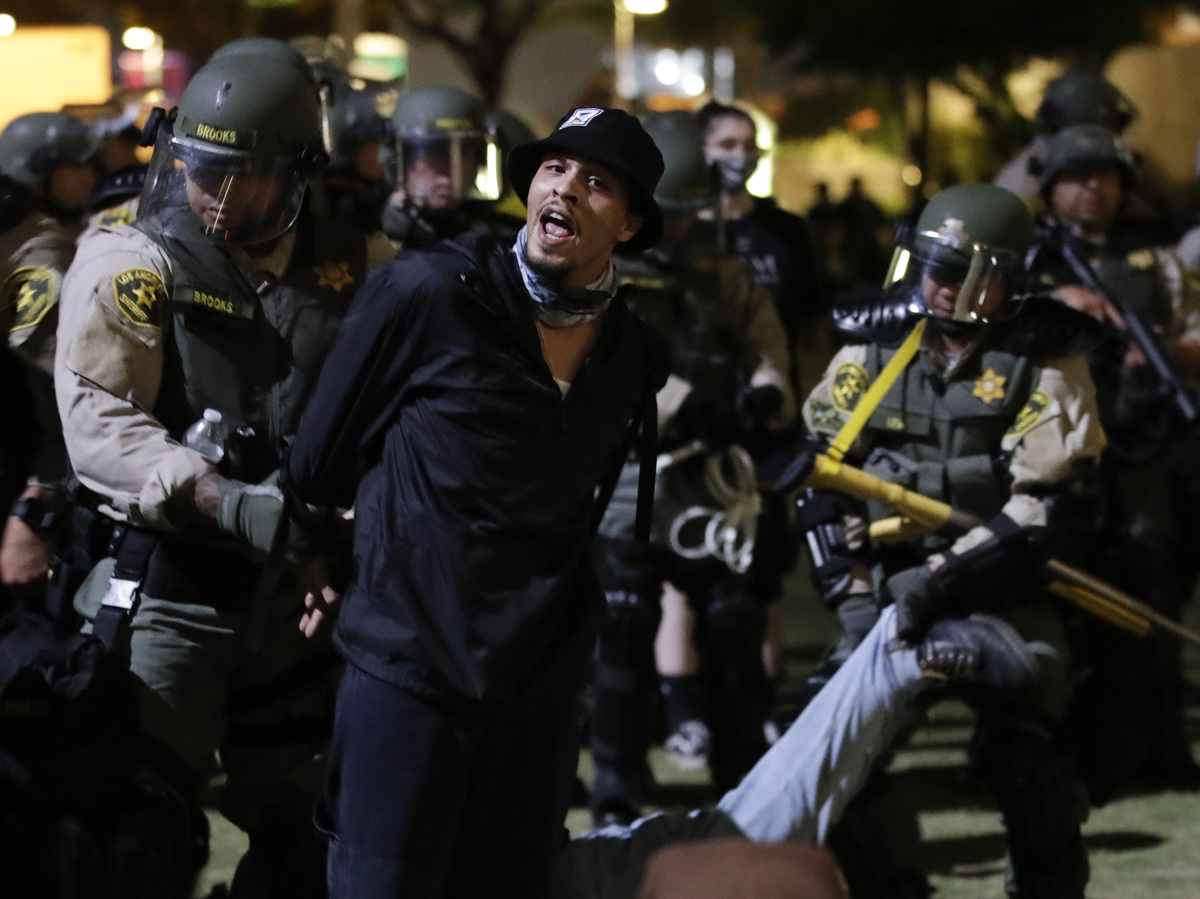 Demonstrators are arrested for a curfew violation Wednesday, June 3 in downtown Los Angeles during a protest over the death of George Floyd.

Thousands of protesters who have been arrested in Los Angeles for violating curfew or failing to disperse will not be prosecuted, county and city officials announced Monday.

Los Angeles County District Attorney Jackie Lacey and Los Angeles City Attorney Mike Feuer explained they will take a non-punitive approach to resolving cases in which people who have taken to the streets protesting police brutality since the killing of George Floyd in Minneapolis, ended up detained and in police custody.

"I believe whole-heartedly in free speech and support the right of protesters to demonstrate peacefully against historic racial injustice in our criminal justice system and throughout our nation," Lacey said in a statement.

"I want to encourage the exchange of ideas and work to establish dialogue between law enforcement and protesters so that we may implement enduring systemic change," she added.

Los Angeles has made more than a quarter of the total national arrests since cities across the country began implementing curfews, the Associated Press reported.

The District Attorney's Office prosecutes all felonies in Los Angeles County and misdemeanors that occur in the unincorporated areas of the county and in most cities.

Lacey, who is in a tight reelection race, has come under intense scrutiny from Black Lives Matter leaders and other Los Angeles-based activists. Last week, thousands of protesters showed up outside her office to call for her resignation. Critics claim she is not doing enough to prosecute police misconduct.

Feuer said his office will create "opportunities for violators to participate in an exchange of ideas and perspectives--as well as a discussion of tangible steps that can be taken by individuals, communities, law enforcement and our office--to address issues relevant to these protests."

Without offering details, Feuer said the alternative to prosecution "will incorporate principles of restorative justice reflected in our Office's Community Justice Initiative, and allow for a non-punitive (financial or otherwise) resolution of these matters, outside of the courts."

"Resolving these violations through alternative methods is a productive and appropriate way to address these offenses, and will have lasting positive effects on our community," Moore said. "I fully support this approach to criminal justice reform, and will work closely with the City Attorney's Office to ensure it is successful."

While the protests in Los Angeles started off peacefully there have been periods of violence, with some groups setting businesses aflame, vandalizing store fronts and stealing merchandise. That led to city and county-wide curfews — some as early as 1 p.m. — which have now ended.

Critics have argued that the LA Police and County Sheriff's departments have been excessively and unnecessarily brutal in their response to the protests.

Over the last two weeks, squads of officers have unleashed tear gas, rubber bullets, flash bombs, tasers, SUVs, fists and batons on protesters. Much of the troubling behavior has been captured by cell phone cameras and shared broadly on social media.

One widely shared video called We See You, Mayor [Eric] Garcetti is a graphic compilation of violent police enforcement actions interspersed with a public address by the mayor in which he lauds the bravery of police officers "who put their lives on the line" and says the city's leadership is "committed to protecting First Amendment rights ... and committed to the peaceful expression of those rights."

Since it was first posted on June 3, it has garnered nearly 8 million views. (Note: the video contains graphic images and explicit language.)

The mayor responded to accusations of police misconduct saying he supports the creation of a special prosecutor to review complaints.

Meanwhile, the LAPD issued a statement urging the public to contact Internal Affairs investigators or the department's Office of the Inspector General if they believed they had been the victims of unjust force or misconduct.