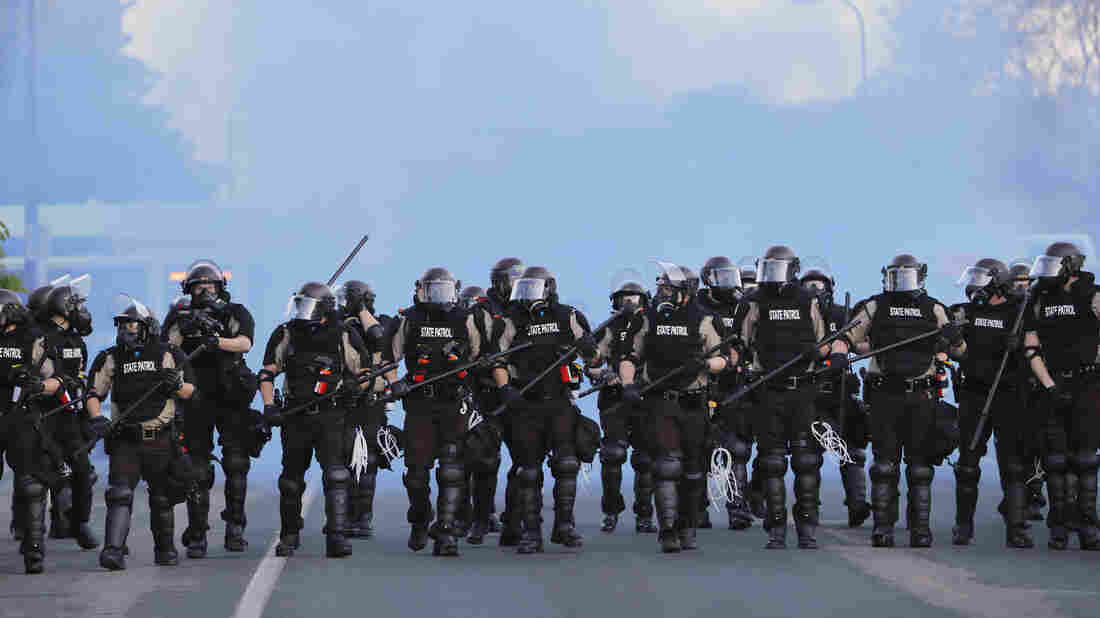 Minnesota State Patrol officers clear an area after curfew in Minneapolis on May 30 — the same day dozens of people found their car tires had been slashed. Law enforcement has now acknowledged disabling the cars during protests over the killing of George Floyd. Julio Cortez/AP hide caption 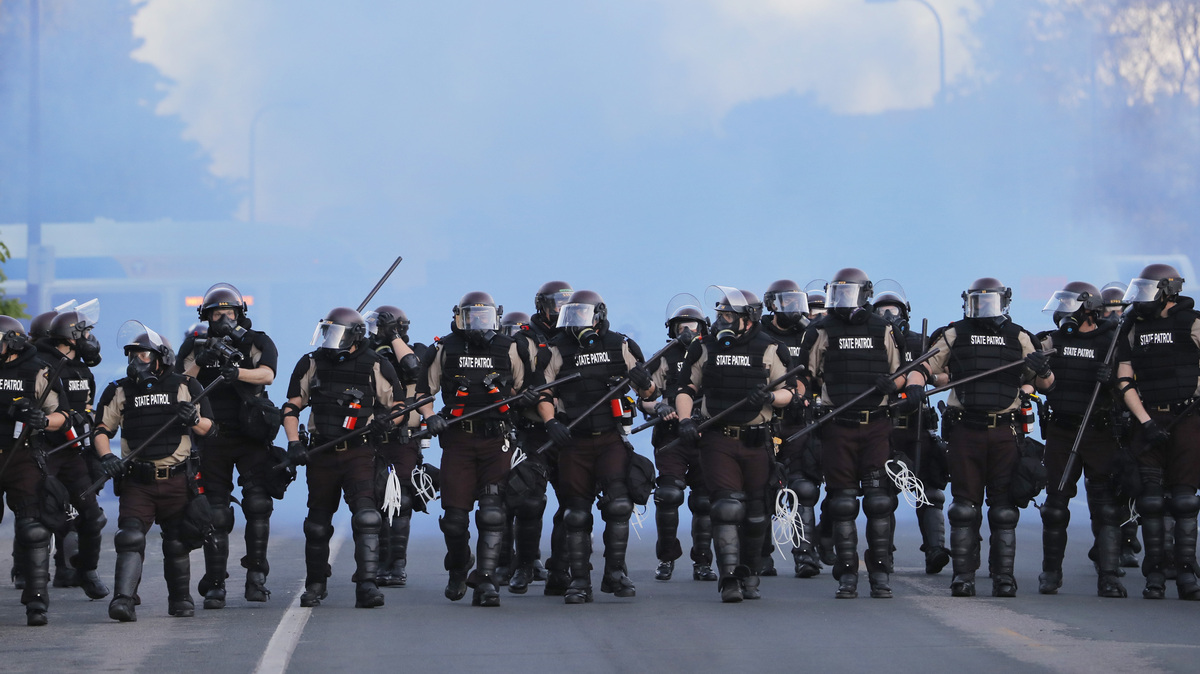 Minnesota State Patrol officers clear an area after curfew in Minneapolis on May 30 — the same day dozens of people found their car tires had been slashed. Law enforcement has now acknowledged disabling the cars during protests over the killing of George Floyd.

Minnesota State Patrol troopers and other law enforcement officers slashed the tires of dozens of vehicles in Minneapolis during large protests over the killing of George Floyd, two police agencies say.

"State Patrol troopers strategically deflated tires to keep vehicles from being used in attacks, and so we could tow the vehicles later for collection of evidence if necessary," Minnesota Department of Public Safety spokesman Bruce Gordon said in a statement to NPR.

The incidents occurred on May 30 and 31 — the first weekend in which outrage over Floyd's killing while in police custody sparked large protests in Minneapolis and other U.S. cities.

Dozens of cars were hobbled in the Kmart lot. Video producer Andrew Kimmel said he returned to his rental car in the middle of the night and found the tires slashed.

Sharing a video of the scene on Twitter, Kimmel said police had cut every tire on his car "as well as every tire of every car in this parking lot."

Minneapolis Police slashed every tire on my rental car, as well as every tire of every car in this parking lot. pic.twitter.com/lchFplYQ0n

"Police took over this entire area shortly after the protests began and haven't left until just now," Kimmel said in a tweet after being asked how he knew the police had cut the tires. He added, "Protesters would not be able to get back into this lot. National Guard stopped me, but let me back in after showing my press badge."

Gordon said police disabled the cars and trucks to prevent vehicles from "driving dangerously and at high speeds in and around protesters and law enforcement."

"While not a typical tactic, vehicles were being used as dangerous weapons and inhibited our ability to clear areas and keep areas safe where violent protests were occurring," he said.

Videos of the police actions have gone viral online. They were recently compiled by Mother Jones, which noted that the incidents happened in at least two spots: a Kmart parking lot and a highway overpass.

Gordon told the Star Tribune that "there will be a review about how these decisions were made."

While protesters had initially planned to use the area as a makeshift medical center, many of the disabled cars belonged to journalists. A car of a Star Tribune reporter was among those targeted. The lot also held at least four CNN vehicles, Kimmel said, citing a tow truck driver with whom he spoke the next day.

Staff from Radio Canada and The New Yorker also found their tires had been cut.

In addition to the Minnesota State Patrol, the Anoka County Sheriff's Office said its officers deflated tires, citing orders from a state command center that is coordinating more than a dozen police agencies in Minneapolis.

But in a statement to NPR, the sheriff's office said its personnel weren't involved in the activity at the Kmart. The office said its employees were involved in disabling two vehicles on May 31 that it said were "illegally abandoned" on a bridge passing over Interstate 35 west.

"This procedure was done in order to preserve order, life, and safety of both the [protesters] and law enforcement," the sheriff's office said.

In its initial report about the May 30 incident at the Kmart, the Minnesota Multi-Agency Command Center said thousands of state and local police officers as well as the state National Guard had "changed tactics and strategies to take a different approach" to keeping the peace during the unrest.

The command center's report described how police forces were prepositioned near likely trouble spots. It did not mention the tactic of disabling vehicles.