Accessibility links
'Go Back To Your Bunker,' Seattle Mayor Tells Trump In Spat Over Protests : Live Updates: Protests For Racial Justice President Trump sharply criticizes officials' response in Seattle: "Take back your city NOW. If you don't do it, I will."

'Go Back To Your Bunker,' Seattle Mayor Tells Trump In Spat Over Protests

'Go Back To Your Bunker,' Seattle Mayor Tells Trump In Spat Over Protests 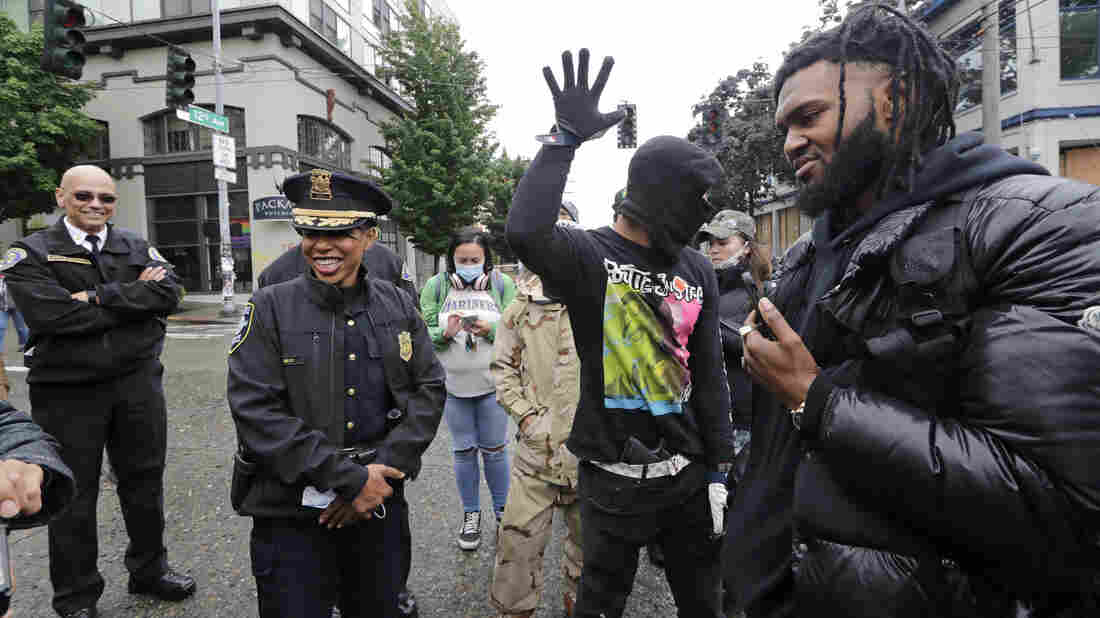 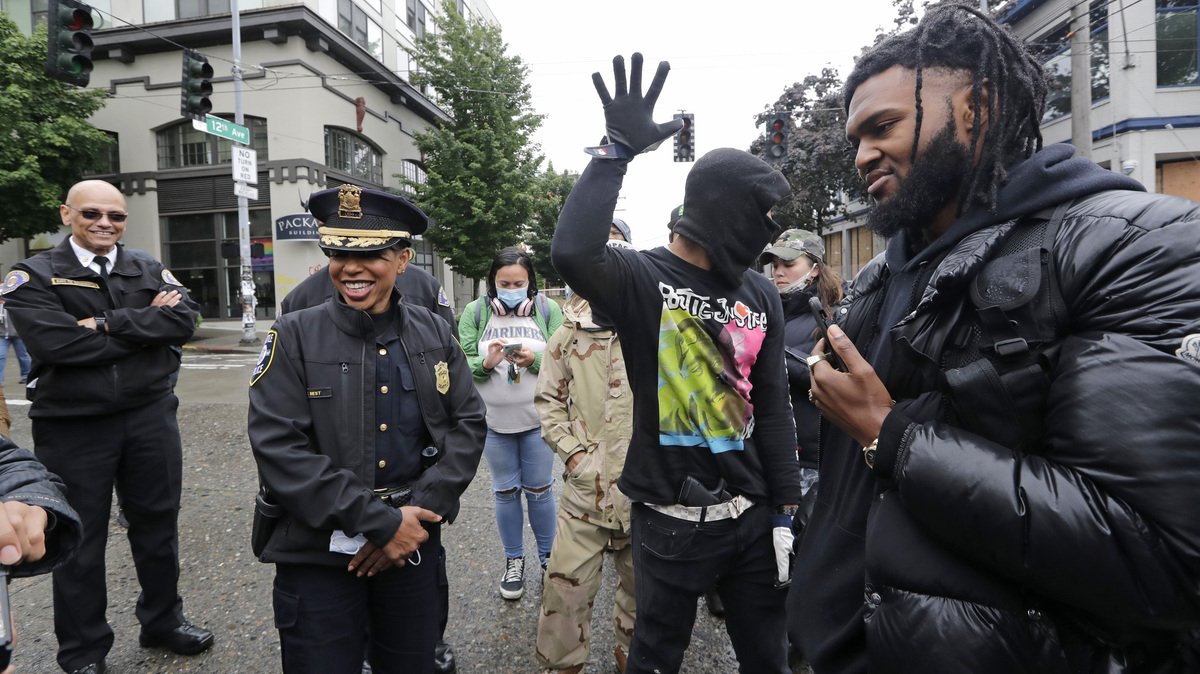 Seattle Police Chief Carmen Best (second from left) talks this week with activists Raz Simone (right) and Keith Brown near the spot in the "Capitol Hill Autonomous Zone" where police had earlier boarded up a precinct building.

President Trump sharply criticized Seattle Mayor Jenny Durkan and Washington Gov. Jay Inslee for their handling of large anti-racism protests, saying via Twitter, "Take back your city NOW. If you don't do it, I will."

Both Durkan and Inslee "are being taunted and played," Trump said. The president commented Wednesday after protesters established an "autonomous zone" on a Seattle street where they had clashed earlier with police.

Durkan fired back with her own tweet, saying, "Make us all safe. Go back to your bunker," referring to Trump being taken to a White House bunker late last month during protests in Washington, D.C. She added the hashtag #BlackLivesMatter, signaling her support for those demonstrating against racism and police brutality.

Make us all safe. Go back to your bunker. #BlackLivesMatter https://t.co/H3TXduhlY4

Inslee responded: "A man who is totally incapable of governing should stay out of Washington state's business."

Trump took aim at Inslee and Durkan late Wednesday night, possibly in regard to the creation of the "Capitol Hill Autonomous Zone," where protesters have been allowed to move freely and without police interference.

The protest zone was established this week after Seattle police took down a barrier near the department's East Precinct building — a change in strategy prompted by backlash against police use of tear gas, pepper spray and flash-bang grenades during demonstrations that were mostly peaceful.

The police actions spurred thousands of complaints and at least one lawsuit. Before suddenly changing course, the department had been building a fence to help fortify the precinct.

"This is an exercise in trust and de-escalation," police Chief Carmen Best was quoted as saying by NPR member station KUOW.

"They've given us the precinct, and we've got to be smart, and we have to work together," a protester told the crowd after police opened up Pine Street, a key thoroughfare adjacent to the precinct.

The "autonomous zone" is in Capitol Hill, a neighborhood with hipster allure and a history as a gay and counterculture hub. The protest zone has its own acronym: CHAZ.

The barrier at the police building was a flashpoint for clashes between police and protesters. After it was removed, The Associated Press reported, protesters were allowed to march in front of the now boarded-up police building "and the night remained peaceful."

"As the police left, the protesters claimed the area and barricaded it themselves," KUOW reported, noting that soon afterward, the demonstrators began to wear bulletproof vests out of concern that white supremacist groups might target their enclave.

This week, the CHAZ area has hosted speeches, music and movie nights. People have also been spotted patrolling the area's boundary with rifles.

Just spoke with 2 people at #CHAZ entrances with AR-15s. They coordinate with medics & keep an eye on passing cars, people coming in, etc. They are not charging people fees to walk around. People say they feel safer with police gone & thanked this man during my intvw. pic.twitter.com/6hqxv5Bydv

Trump's threat to intervene in Seattle is reminiscent of his exchanges with the mayors of Minneapolis and Washington when those cities became rallying points for large protests after George Floyd was killed in police custody.

Trump pledged to use federal troops to control the situation in Minneapolis, going so far as to declare that "when the looting starts, the shooting starts" — a phrase invoked by a white police chief cracking down on civil rights protests in the late 1960s.

The president also took to Twitter to accuse Washington Mayor Muriel Bowser falsely of preventing the city's police from getting involved during protests in late May.

Nearly a week later — after U.S. Park Police and National Guard troops used strong-arm tactics and tear gas to move peaceful protesters so the president could pose for a photo in front of St. John's Church — Bowser's government ordered a huge mural with the words "Black Lives Matter" in yellow paint on a two-block stretch of road near the White House.

Welcome back to #CHAZ where artists are painting BLACK LIVES MATTER in huge letters on Pine. #seattleprotest pic.twitter.com/TVMT3CSjUA

On Wednesday, protesters in the "CHAZ" area painted a similar mural on Pine Street.

Despite the protesters' celebration of a victory, the situation in Seattle remains heated. Some activists are calling for Durkan to resign; they also want to slash funding to the city's police department.