Accessibility links
Atlanta Police Release Video Of Minutes Before Rayshard Brooks Shooting : Live Updates: Protests For Racial Justice Police shot and killed Rayshard Brooks during an attempted arrest Friday. By Sunday the city's police chief had resigned and the officer who shot Brooks had been fired. 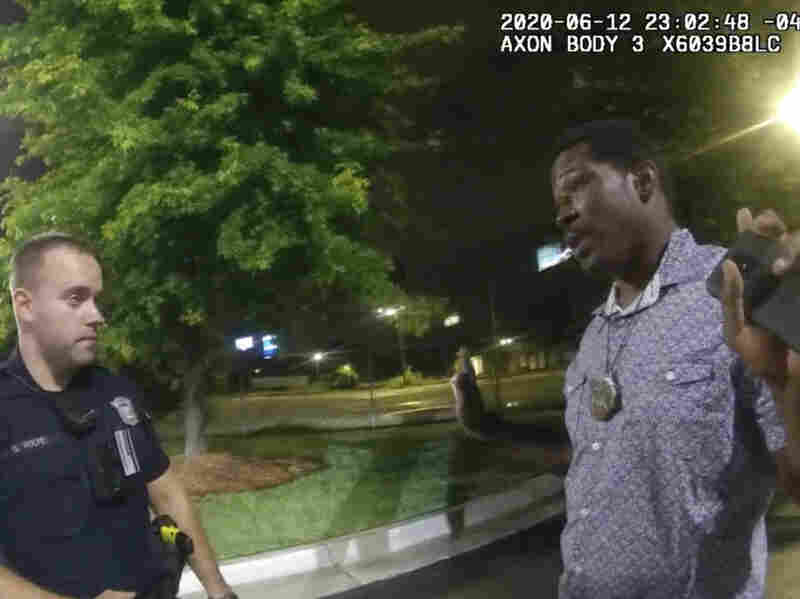 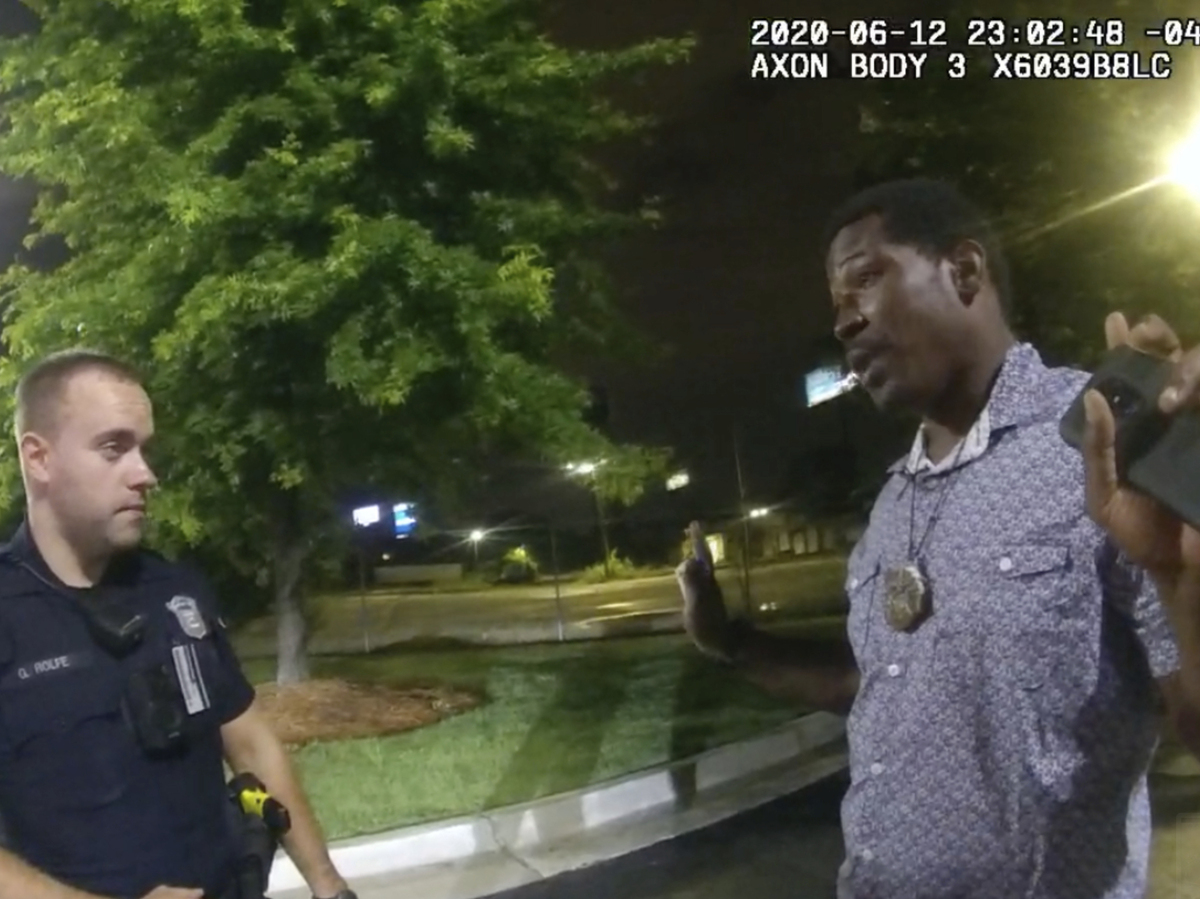 In a screenshot from body camera video provided by the Atlanta Police Department, Rayshard Brooks speaks with Officer Garrett Rolfe in a Wendy's parking lot.

As Atlanta protesters took to the streets again Sunday, incensed by the killing of Rayshard Brooks, a 27-year-old black man fatally shot by a police officer, body cam videos released by the Atlanta Police Department showed Brooks being polite and for the most part, calmly complying with officers' requests.

The incident quickly turned deadly and by Sunday the city's police chief had resigned, the officer who shot Brooks had been fired and ongoing demonstrations against police killings of black people were reignited.

Police were called after Brooks was found asleep in a car at a Wendy's drive-through Friday night.

In video of the officers' questioning, which lasted over 30 minutes, Brooks was open about the reason why he had pulled off and fell asleep, saying at one point, "I'm just not feeling right," and admitting to having some drinks Friday evening.

At one point during the encounter Brooks tells officers, "I know you're just doing your job."

Officers gave Brooks a field sobriety test, then asked if he would comply with taking a breathalyzer test, which he did.

After he failed that test, footage shows an officer attempts to handcuff and arrest Brooks, when a struggle breaks out.

Brooks then appears to grab a Taser, and runs away. The two officers give chase and one fires a Taser at Brooks, and at one point Brooks points the Taser in the direction of an officer behind him.

Then that officer pulls out a hand gun and fires at Brooks, three shots are heard, and Brooks falls to the ground. Brooks later died at the hospital.

The Fulton County Medical Examiner confirmed on Sunday that Brooks died of gunshot wounds to his back, and labeled the death a homicide.

"We count two minutes and 16 seconds before they even checked his pulse," L. Chris Stewart, one of the Brooks family attorneys, said in a press conference on Saturday evening.

According to the Brooks family attorneys, Rayshard Brooks has three daughters, who are 1, 2 and 8 years old. He was working at a "tortilla place," Stewart said. Brooks reportedly also had a stepson.

"He was supposed to take his daughter skating today for her birthday," Justin Miller, another attorney representing the Brooks family, said. "Today [Saturday] there was a birthday party, with cupcakes while we were sitting there talking to her mom about why he's not coming home."

The officer who shot Brooks, Stewart said, should be charged with "an unjustified use of deadly force, which equals murder."

"This wasn't a violent crime, they had his I.D., they knew where he lived, they had the car," Stewart said.

"I feel like I'm stuck being a single black parent. I'm being forced to do it by myself. This was not a choice. They took my husband away," Tomika Miller, Brooks' wife, said in an interview with ABC. "They destroyed my family. No justice will ever get that back. This is another black family being broken."

The details emerging from the videos came a day after Atlanta's chief of police Erika Shields stepped down.

Mayor Keisha Lance Bottoms announced Saturday that she had accepted Shields' resignation. During a press conference, Bottoms said Shields had informed her of the decision to step aside, saying it was out of a desire for the Atlanta Police Department to serve as a model for reform.

"Chief Shields has offered to immediately step aside as police chief so that the city may move forward with urgency in rebuilding the trust so desperately needed throughout our community," Bottoms said. 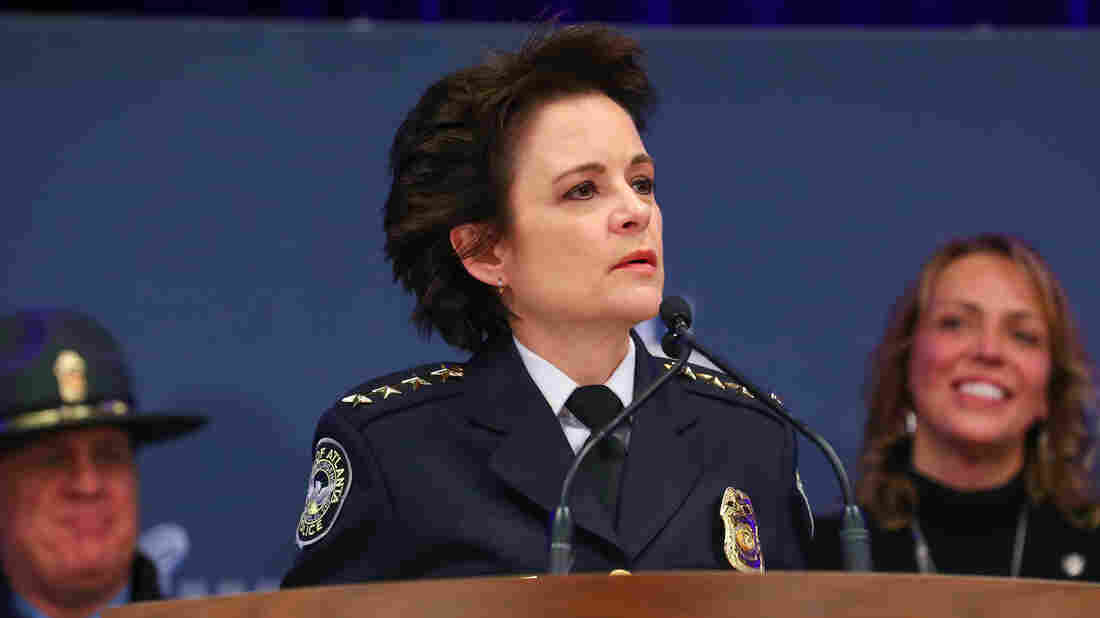 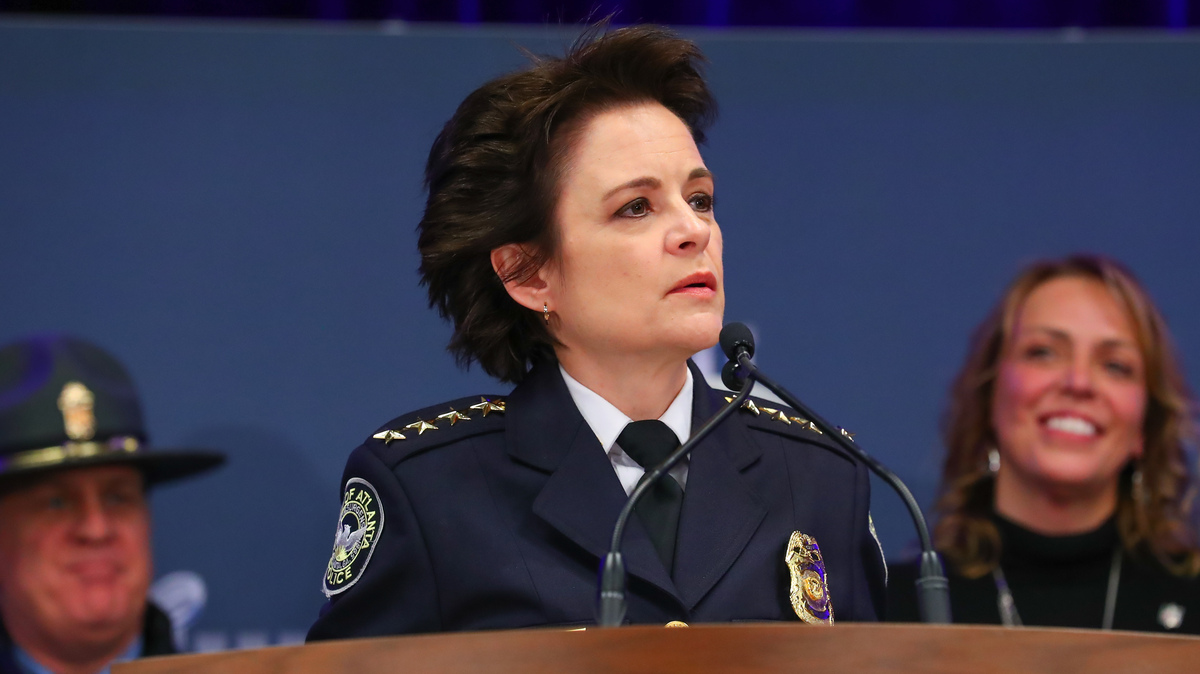 Shields said in a statement that her decision was made "out of a deep and abiding love" for her city.

"It is time for the city to move forward and build trust between law enforcement and the communities they serve," she said.

During the press conference, Bottoms offered her condolences to Brooks' family. She also called for the immediate termination of the officer who fired the shots that killed Brooks.

Former Assistant Chief Rodney Bryant will serve as the interim head of the department until a replacement is selected, Bottoms said. Shields, who had been appointed chief in 2016, will continue to serve in a yet-to-be determined role with the city.

Atlanta Police Sgt. John Chafee told NPR late Saturday night that Officer Garrett Rolfe, who fired at Brooks, had been terminated following the incident. Rolfe had been working for the department since 2013. Devin Brosnan, another officer involved in the incident, has been placed on administrative leave.

The news of Brooks' death spread in a whiplash fashion and drew condemnation after weeks of nationwide protests over police killings of black people. Protests broke out in Atlanta, with some demonstrators setting a fire inside of the Wendy's where the shooting took place.

The Atlanta Fire Rescue Department said in a tweet that officers were not entering the Wendy's until it was safe to to do. The building is located next to a gas station.

"The killing of #RayshardBrooks in Atlanta last night demands we severely restrict the use of deadly force," Abrams tweeted. "Sleeping in a drive-thru must not end in death."

"Georgia woke up to disturbing videos and reports of Rayshard Brooks being killed by an officer of the Atlanta Police Department," the Georgia NAACP said in a statement. "This is not the first time a Black man was killed for sleeping."

"[Brooks] did not seem to present any threat to anyone. The fact that it would escalate to his death seems unreasonable," Fulton County District Attorney Paul Howard told CNN on Sunday.

Howard also said a decision on whether charges would be brought against the officers would be made by mid-next week.