Accessibility links
Across The U.S., A Juneteenth 'Tinted With Sorrow' And Buoyed By Hope : Live Updates: Protests For Racial Justice Rallies are happening from Atlanta to Los Angeles — including in Galveston, Texas, where the holiday was born. Amid a reckoning around race, this year's Juneteenth has an even more urgent meaning.

Across The U.S., A Juneteenth 'Tinted With Sorrow' And Buoyed By Hope

Across The U.S., A Juneteenth 'Tinted With Sorrow' And Buoyed By Hope 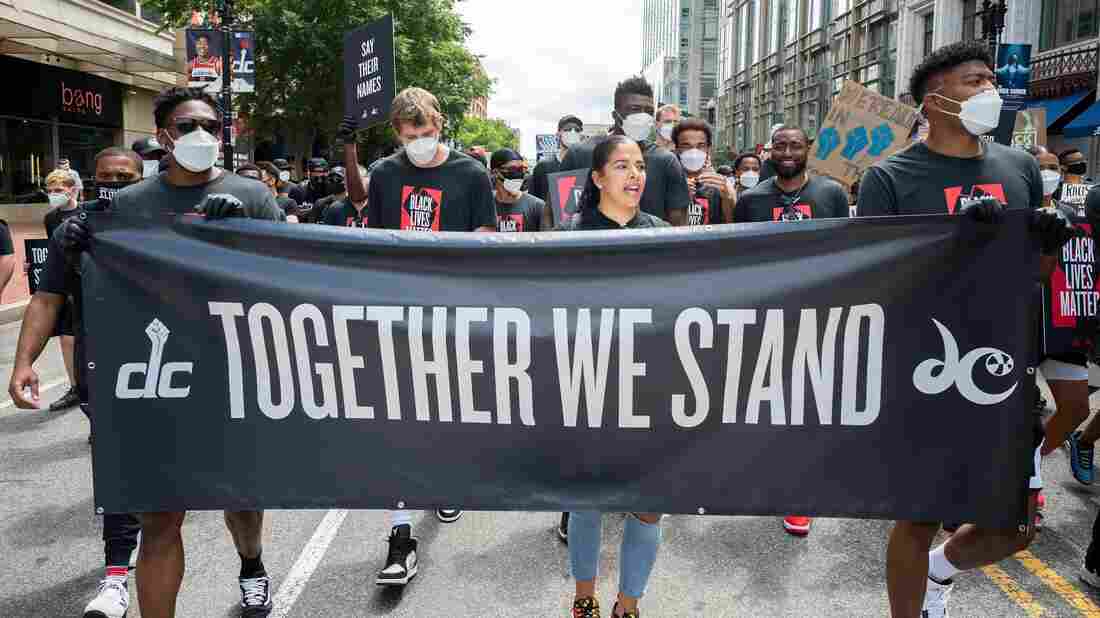 Demonstrators take part in a Juneteenth march and rally Friday in Washington, D.C., one of a number of major cities to see large gatherings commemorating the date. Jim Watson/AFP via Getty Images hide caption 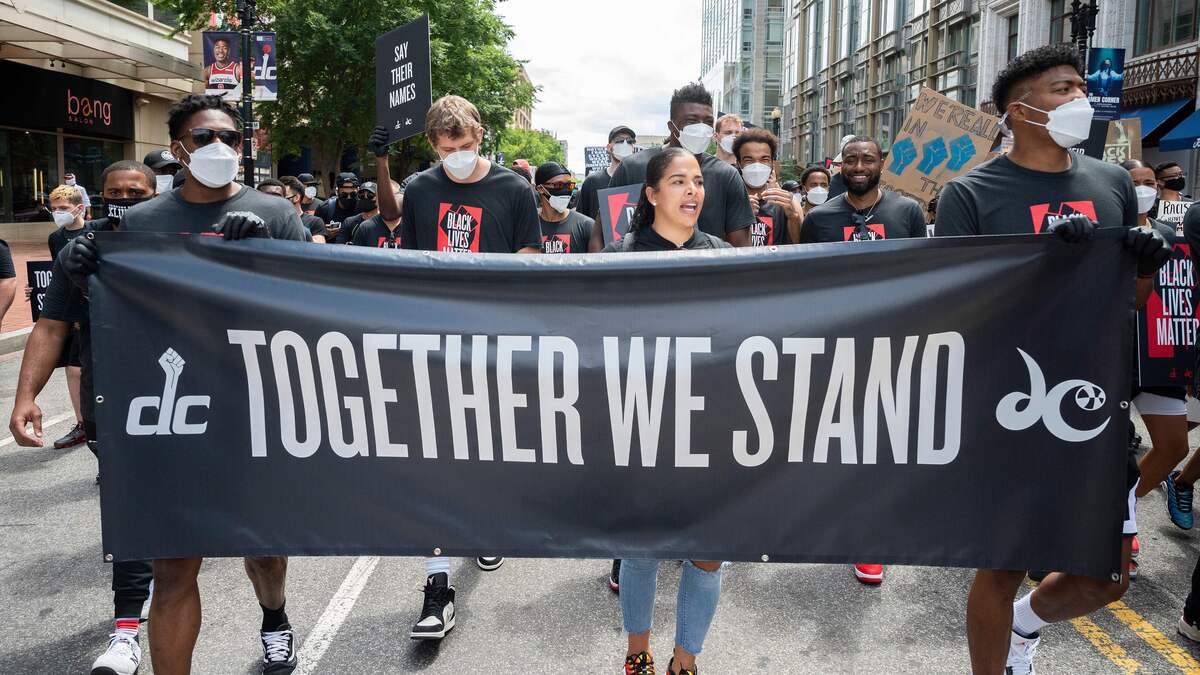 Demonstrators take part in a Juneteenth march and rally Friday in Washington, D.C., one of a number of major cities to see large gatherings commemorating the date.

The weeks since the killing of George Floyd have been a cauldron of outrage, frustration and, at times, violence. But on Friday, Juneteenth brought another emotion to this simmering mixture: the joy of celebration.

Demonstrators planned rallies in towns and cities across the country, from Atlanta to Los Angeles, to commemorate the date that the U.S. informed people in Texas that all those enslaved were now free in 1865. Many of those marking that moment say the 155-year-old holiday has a new sense of urgency amid the swell of nationwide protests against police brutality and racial injustice.

"This celebration is tinted with sorrow because of the lives of George Floyd, Breonna Taylor, Ahmaud Arbery. But there is hope — hope for the protests and the demonstrations that are going on. Hope that social justice will occur in this country and will occur soon," Stephen Holmes, county commissioner in Galveston, Texas, told attendees at a Juneteenth celebration in that city. 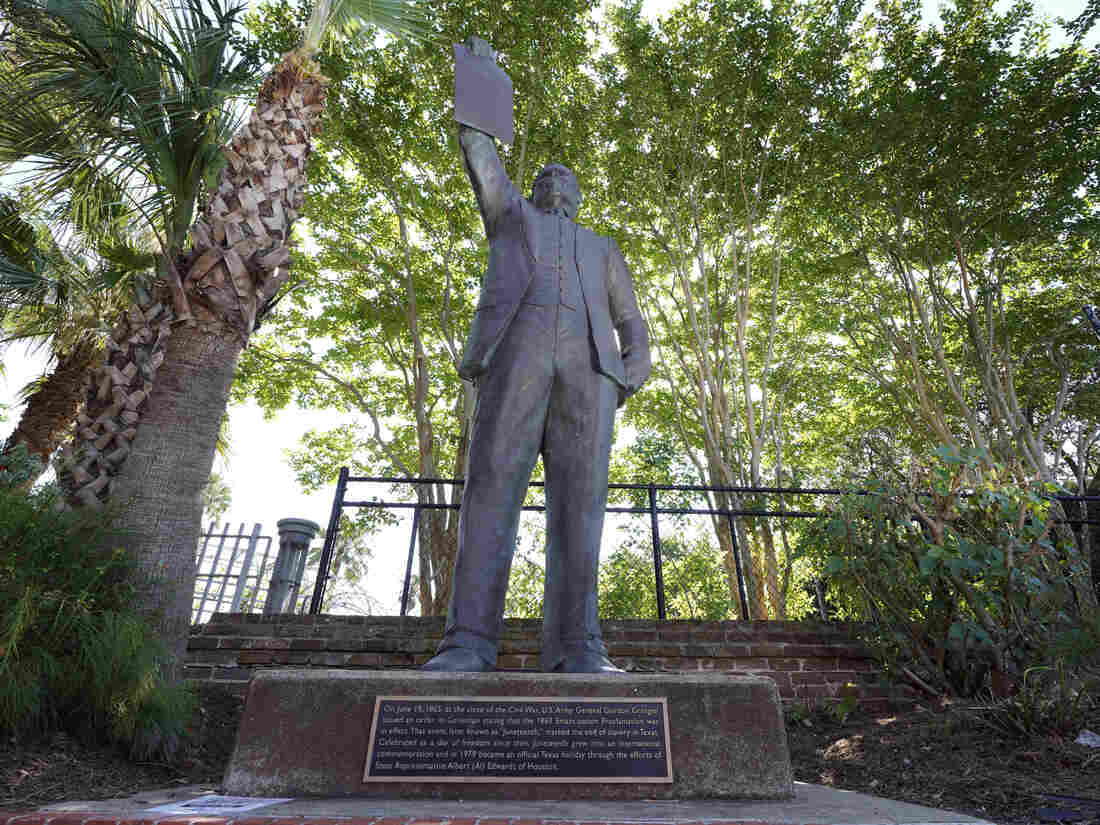 A statue in Galveston, Texas, honors state lawmaker Al Edwards, who authored a bill that made the date an official state holiday. City leaders gathered in the statue's shadow Friday for a ceremony remembering both Edwards and the emancipation. David J. Phillip/AP hide caption 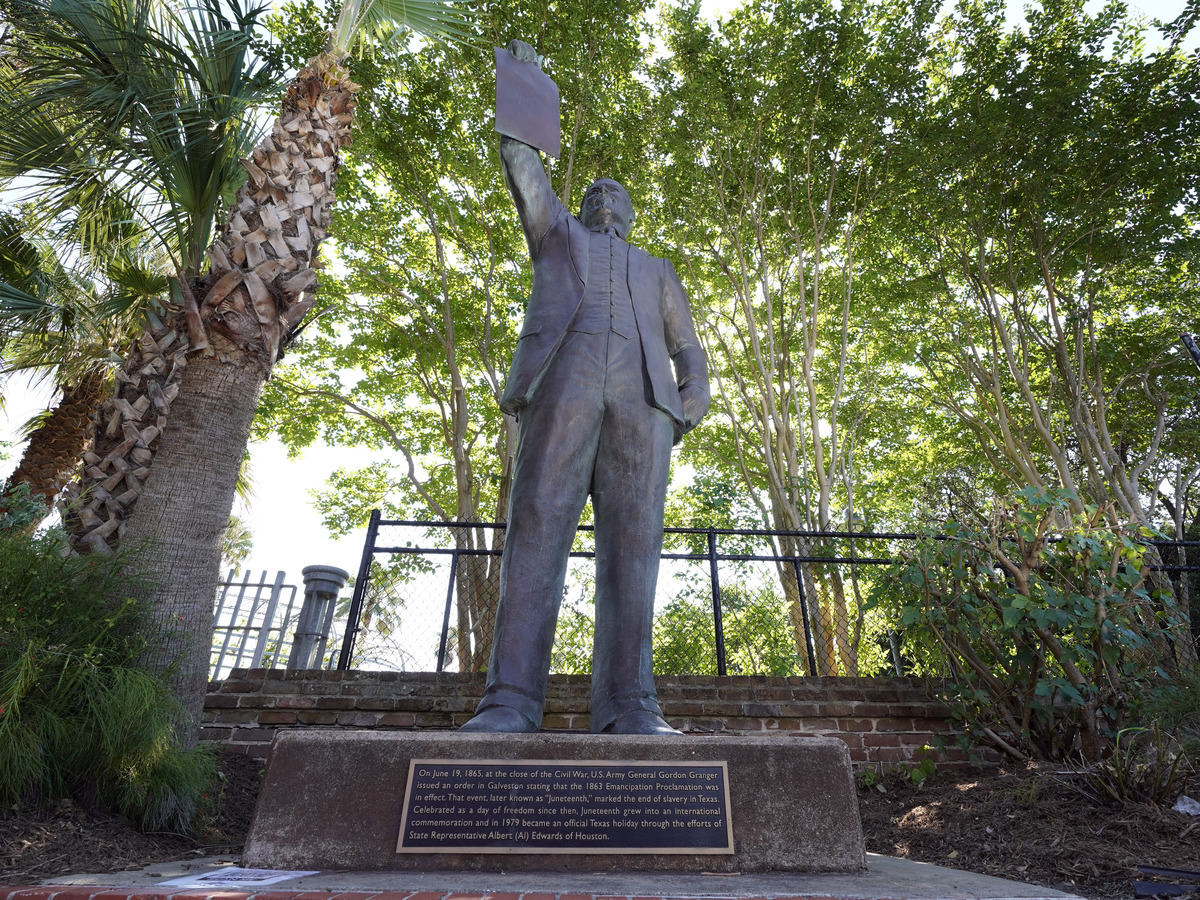 A statue in Galveston, Texas, honors state lawmaker Al Edwards, who authored a bill that made the date an official state holiday. City leaders gathered in the statue's shadow Friday for a ceremony remembering both Edwards and the emancipation.

It was there, on June 19, 1865 — more than two years after the Emancipation Proclamation was signed by President Abraham Lincoln — that Union soldiers announced and enforced the abolition of slavery in the state where many slaveowners had resisted emancipation.

More than a century afterward, in 1979, Texas became the first U.S. state to mark the date an official state holiday by the name of Emancipation Day — with a bill authored by then-Texas state lawmaker Al Edwards.

"This is where it happened that African Americans received their freedom in the South, delivered by the word of the U.S. government," Al Edwards Jr. said at the event, which was held before a statue honoring his father in Galveston.

"It's not to be taken away from us. It's not to be muzzled or silenced or marginalized. It is Freedom Day for African Americans in the United States. It is our day. White, Black, Asian, Mexican-American — it is a United States holiday."

Forty-five other states and the District of Columbia have followed Texas' lead. New York City Mayor Bill de Blasio announced Friday that Juneteenth would become a city and school holiday beginning next year, as did the mayor of Louisville, Ky., which has been struggling with the fallout from Taylor's killing.

And a movement to designate it a federal holiday has been gathering momentum after several high-profile police killings of Black people trained widespread attention on racial injustice in the United States.

Thousands and thousands of people marching in Atlanta to celebrate Juneteenth and justice for #AhmaudArbery #georgefloyd and countless more pic.twitter.com/YJtu7nznCA

Thousands of people nationwide aren't waiting on that designation. Rallies have been organized in Seattle, New Orleans and Washington, D.C., among other places — even in Milledgeville, a town of nearly 20,000 that once was the capital of Georgia before and during the Civil War.

Multiple cities — including Birmingham, Ala. — saw "Black Lives Matter" painted in vast murals akin to the one created this month on a two-block stretch of road in Washington.

“Black Lives Matter” is now painted on the street along Greenwood near Archer as we’re just a few hours from the Juneteenth event. More than 60 people spent the overnight hours painting this. @NewsOn6 pic.twitter.com/CAWKDYOKt8

Meanwhile, in Tulsa, Okla., where President Trump plans to hold a campaign rally Saturday, people flocked to Juneteenth celebrations. Seth Bodine of NPR member station KOSU reported that local officials expect more than 100,000 people to gather in the city this weekend for the rally and other events.

Tulsa has a grim racial history. In 1921, white residents there killed more than 150 people — and possibly as many as 300 — in a spasm of violence directed at Black people, and they took a torch to the principally Black neighborhoods in the city.

The Rev. Al Sharpton is expected to deliver the keynote speech at a Juneteenth event Friday in Tulsa alongside the family of Terence Crutcher, a local Black man killed by Tulsa police in 2016. The officer who shot him during an arrest was later acquitted of manslaughter.

Elsewhere, the holiday coincided with another aspect of racial reckoning in the United States: the memorials across the country dedicated to Confederate leaders and other controversial figures.

In Columbus, capital of Ohio, that meant dismantling a statue dedicated to the city's controversial namesake, explorer Christopher Columbus, outside City Hall. In the nation's capital, that meant removing the portraits of four former House speakers who served in the Confederacy.

"We are especially encouraged by the steps taken to remove their portraits on the eve of Juneteenth — the day that will forever commemorate the emancipation of Black people from enslavement," Lecia Brooks of the Southern Poverty Law Center said in a statement shared with NPR.

"May this be one of many steps taken by our elected leaders to dismantle the structures of white supremacy that still remain all across our country."