Accessibility links
Original Juneteenth Order Turns Up At U.S. National Archives : Live Updates: Protests For Racial Justice "The people of Texas are informed that, in accordance with a proclamation from the Executive of the United States, all slaves are free," states General Order No. 3.

The original version of General Order No. 3 was located this week by staff at the U.S. National Archives. The first part of the 1865 order is seen here. 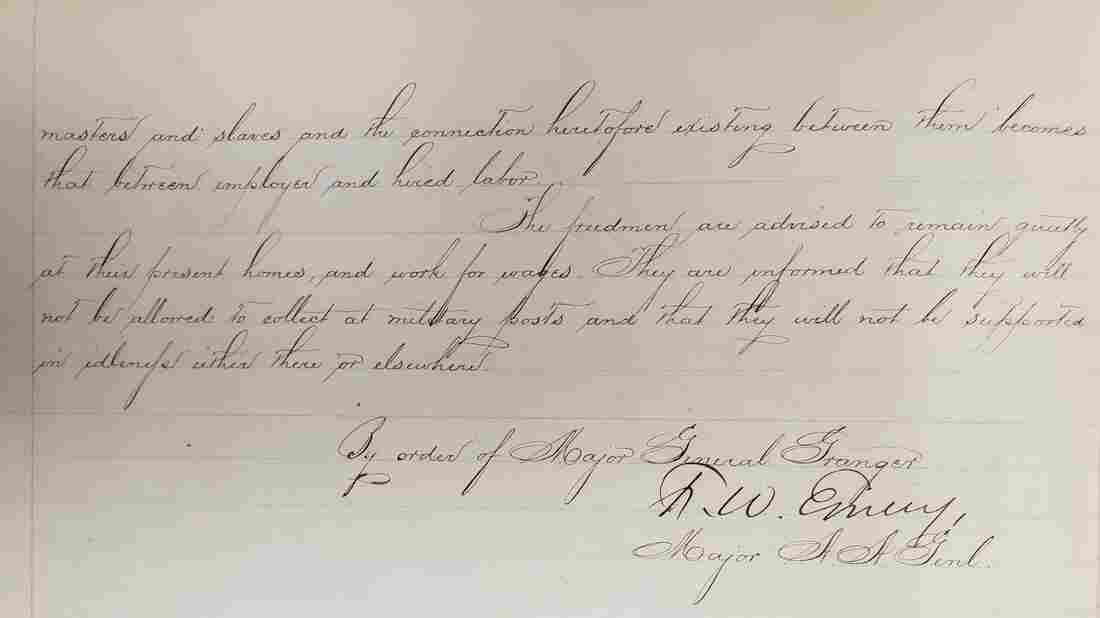 The second part of the order. National Archives hide caption 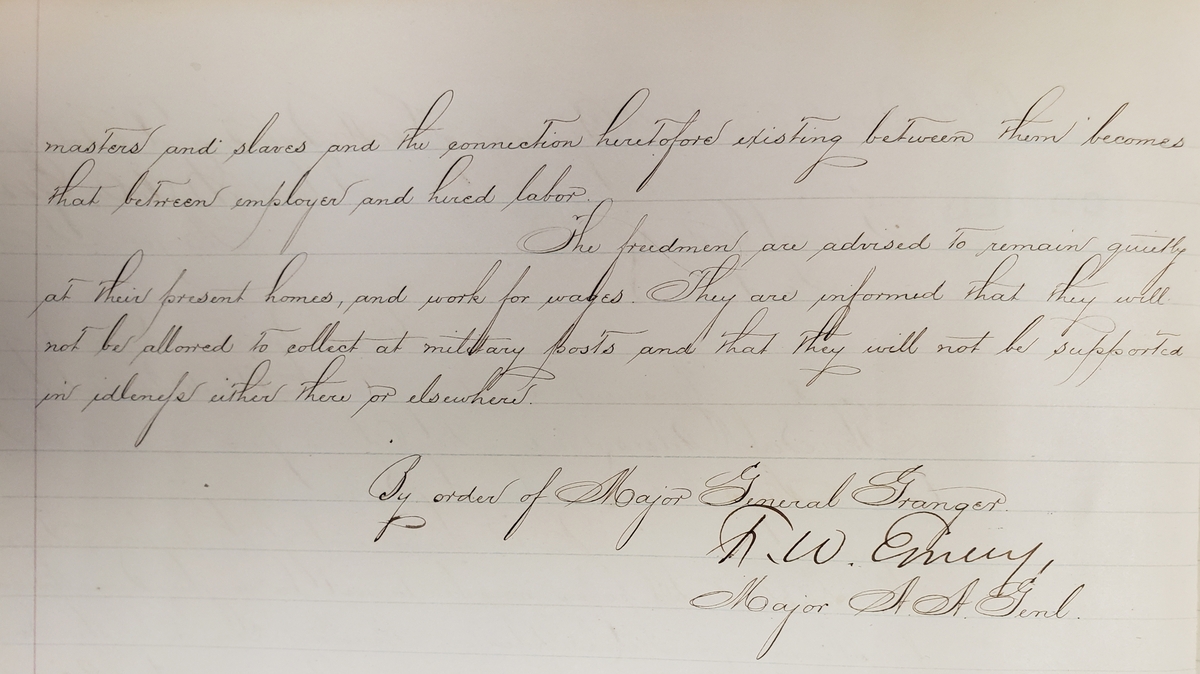 The second part of the order.

General Order No. 3 doesn't use the exalted language of some other documents central to American history.

But for the generations of African Americans who have celebrated Juneteenth, General Order No. 3 is so powerful that it is sometimes read aloud to mark the occasion, alongside or instead of the Emancipation Proclamation.

The order, issued in Galveston on June 19, 1865, by U.S. Maj. Gen. Gordon Granger, informed the people of Texas that all enslaved people were now free:

"The people of Texas are informed that, in accordance with a proclamation from the Executive of the United States, all slaves are free. This involves an absolute equality of personal rights and rights of property between former masters and slaves, and the connection heretofore existing between them becomes that between employer and hired labor. The freedmen are advised to remain quietly at their present homes and work for wages. They are informed that they will not be allowed to collect at military posts and that they will not be supported in idleness either there or elsewhere."

Word then spread quickly among African Americans that the U.S. had ended slavery. White slaveholders were already aware of the 1863 Emancipation Proclamation, but as the Civil War continued, they had not complied, instead bringing more enslaved people into Texas from other parts of the South. Granger backed up his order with 2,000 troops.

While many copies of the order exist, the current national reckoning over racial injustice compelled staff at the U.S. National Archives to delve into the stacks and search for the original document.

"Based on what's going on now in this country, there was a need to talk about Juneteenth, the freeing of enslaved people in 1865," says Michael Davis, a public affairs specialist at the Archives. "I was curious to know if we had the actual document of General Order No. 3 in our holdings."

So Davis reached out Trevor Plante, who directs the Archives' textual records division. Plante found that the order was issued by the district of Texas, which helped him locate that command's order book — used as the official record of orders issued.

Plante found that book Thursday in the stacks of the National Archives Building in Washington, D.C., and located the now-famous order within — handwritten by the major general's aide, F.W. Emery, and still in good condition. It bears the number 3 because it was just the third order that Granger had issued since taking over the Texas command.

In 1865, the book was in Galveston, then the Union Army's headquarters for the district of Texas. Later on, Plante says, it would have been sent to the War Department in Washington, D.C., and then on to the National Archives, where it has been since probably the 1940s, available for researchers to request and peruse.

With the document's fresh resurgence, it will now be digitized and added to the Archives' catalog, as well as highlighted on the National Archives and Records Administration's African American history page. Because of the coronavirus pandemic, the Archives' museum and buildings are closed to the public and its in-person services have been suspended.

But in the future, there may be keen interest in viewing the physical version of Order No. 3.

Christopher Wilson, who leads the African American History Program at the National Museum of American History, points to the last time the original Emancipation Proclamation went on tour outside D.C. For conservation reasons, the original can only be displayed for a few days at a time under extremely low light — and he says people lined up at museums across the country to catch a glimpse, even at 2 in the morning.

"I think it's wonderful that we have found [Order No. 3] and it can be added to the understanding of the end of slavery, because I think there is such a misunderstanding around how that happened and who motivated it to happen," Wilson says.

When people learn history via a public holiday, he says, the story often becomes simplified.

Juneteenth is not about enslaved African Americans being "told they were free," he argues — but about power moving slowly, the agency of African Americans to gain liberty and the need to back up justice with action.

General Order No. 3 is a part of that more complicated history, even with its less-than-poetic words — the dry legality is partly what makes the order so meaningful, Wilson says.

"Just to see what was looked upon by our ancestors as this evidence that finally the weight of federal authority, the weight of everything that the United States had promised to people, was finally showing up in black and white."