Accessibility links
Seattle Police Will Return To Precinct In Protest Zone, Mayor Says : Live Updates: Protests For Racial Justice "It's time for people to go home," Seattle Mayor Jenny Durkan says, after a weekend in which three people were shot in the zone known as the Capitol Hill Organized Protest, or CHOP. 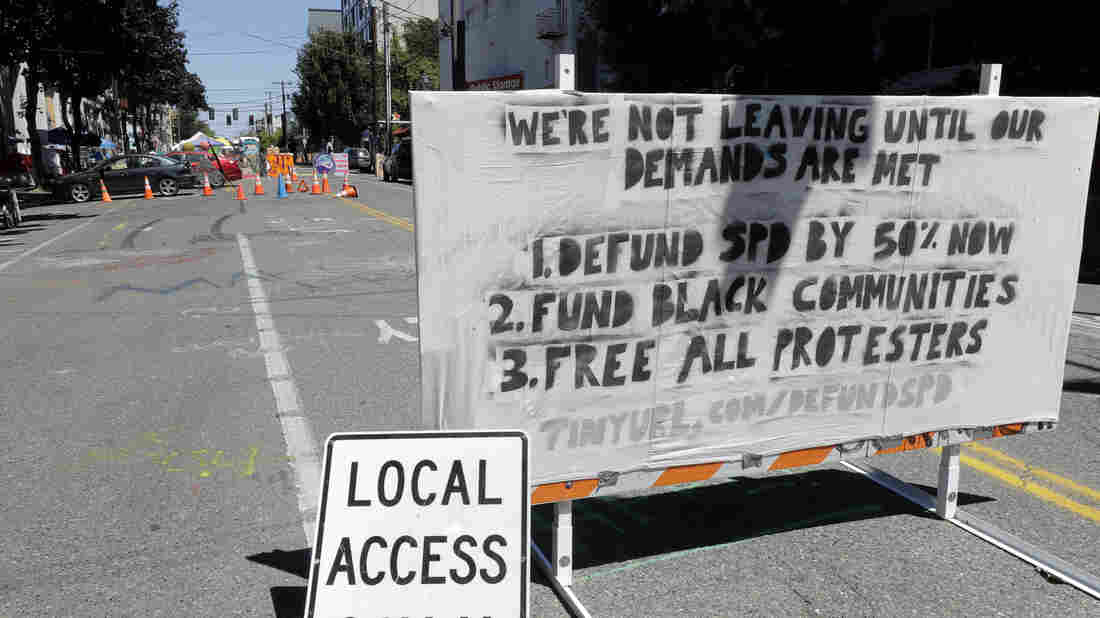 The Seattle Police Department will return to their East Precinct building "in the near future," Mayor Jenny Durkan says. Here, a sign on a street barricade lists protesters' demands in the Capitol Hill Occupied Protest zone, where two shootings took place over the weekend. Ted S. Warren/AP hide caption 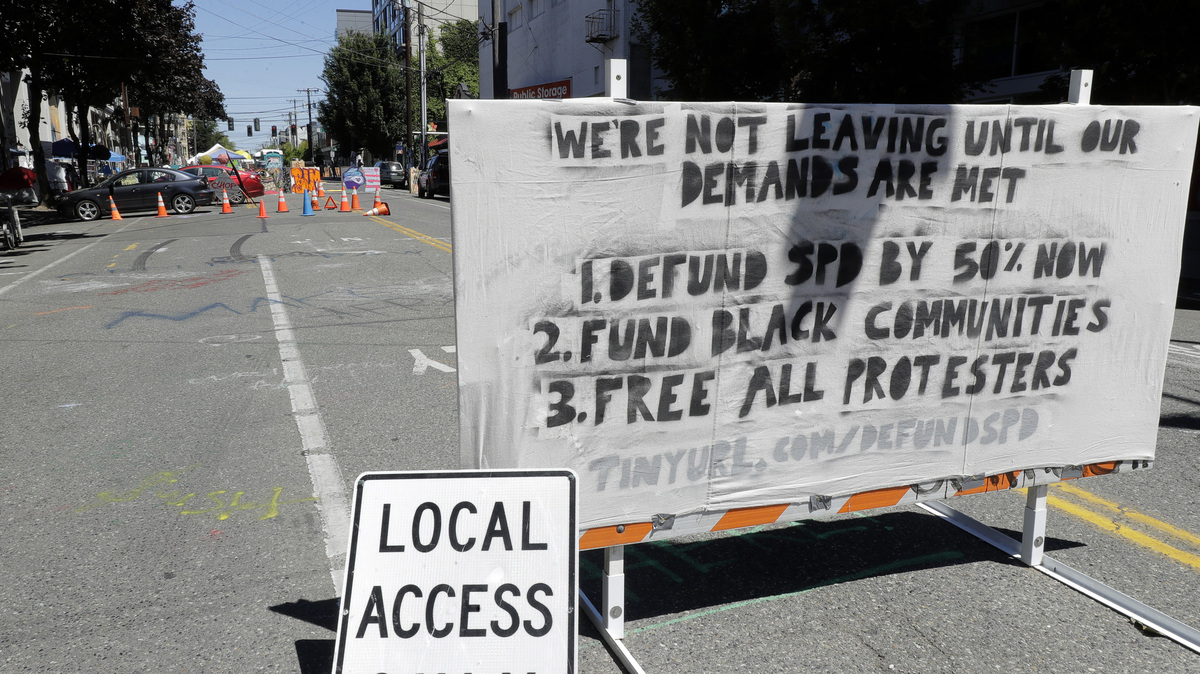 The Seattle Police Department will return to their East Precinct building "in the near future," Mayor Jenny Durkan says. Here, a sign on a street barricade lists protesters' demands in the Capitol Hill Occupied Protest zone, where two shootings took place over the weekend.

Seattle Mayor Jenny Durkan says police will return to their East Precinct building, after a weekend in which three people were shot in the occupied zone known as the Capitol Hill Organized Protest, or CHOP. One of the victims died.

"In the near future, SPD will be peacefully returning to the East Precinct," Durkan said via Twitter, as she and Police Chief Carmen Best announced plans to take back control of the area formerly known as the Capitol Hill Autonomous Zone.

Seattle police need to work from the precinct to "ensure public safety" and respond to emergency calls, Durkan said.

"It's time for people to go home," the mayor said, according to member station KUOW.

"The continued disorder, the violence, and the impacts on residents and businesses are not just at odds with a message of justice and equity, they cannot continue to occur," Durkan said.

The CHOP zone, which spans roughly six blocks, has become a hub of art and activism in the two weeks since police vacated the precinct building. But there also have been outbreaks of violence, particularly at night. Over the weekend, police and emergency workers who responded to calls of shootings were forced to stay on the fringes of the protest zone, which is outlined by street barricades.

A 19-year-old man was killed around 2:30 a.m. local time Saturday in a shooting that police say occurred in Cal Anderson Park — just around the corner from the East Precinct at 12th Avenue and Pine Street. That incident also left a 33-year-old man in critical condition.

"Officers attempted to locate a shooting victim but were met by a violent crowd that prevented [their] safe access to the victims," the Seattle Police Department said. "Officers were later informed that the victims, both males, had been transported to Harborview Medical Center by CHOP 'medics'."

When police arrived at the hospital, they learned that one of the shooting victims had died.

Late Sunday night, a 17-year-old was shot in the arm. That victim was also taken to the Harborview Medical Center by private vehicle, before first responders could reach him.

Protesters in the CHOP have listed three main demands: to cut funding for the Seattle police by 50%; to devote that money instead to community efforts such as restorative justice and health care, and to ensure that protesters are not charged with crimes. Protesters also have called for Durkan to resign.

The protest zone was established in the Capitol Hill neighborhood after a backlash against the city's police over the use of tear gas, pepper spray and flash-bang grenades during protests that had largely been peaceful. The protest area, first known as CHAZ and then as CHOP, became a home for a number of activist groups that are united behind the Black Lives Matter movement's fight against systemic racism.

As the mayor and police prepare to return to the precinct, there are signs that activists are working to continue their collective efforts, no matter the protest area's fate.

On Monday night, one group of CHOP organizers shared an open letter from a new group called Seattle Organized Protest Support that states, "we acknowledge that CHOP will not be forever and may not be sustainable for much longer, but that doesn't mean the fight is over."